Last year I wrote about DFDS’s new dog friendly cabins which travel between Newcastle in the UK and Amsterdam in Holland.

On that occasion we travelled as foot passengers, which was a unique experience because DFDS are the only UK ferry operator that can get foot passengers to the continent and which have dog friendly cabins, writes Paul Wojnicki.

We were so impressed last year by the food, children’s entertainment, ships and (by no means least) the dog friendly cabins, that this year we decided to use them again. Only this time we took our car so that we could check out some of Holland and Germany’s attractions that are within easy reach of the ferry port, and we discovered some breathtaking hidden gems. 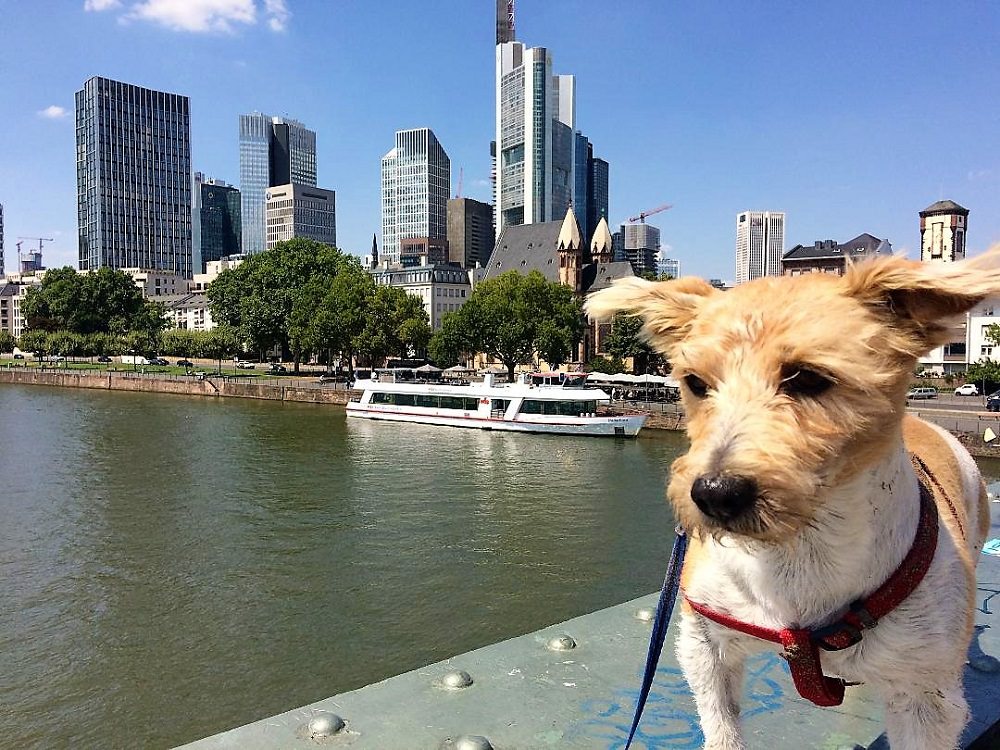 What to do in Amsterdam with your dog

Ever since we first used the DFDS ferry I’ve noticed that it docks just around the corner from a pristine looking stretch of sand in the port city of Ijmuiden, which is located at the entrance of the North Sea Canal to Amsterdam in North Holland.

So since we’ve got a number of hours to kill before the auto-train leaves Dusseldorf we decide to check the beach out first.

I must confess that I’m not as familiar with Holland as I should be (for a travel writer anyway) so I’m pleasantly surprised to find that the beach has a lot more facilities than is evident from the deck of the ship as it passes.

Picturesque beach huts line the sand, and a pretty harbour sits behind the beach. There are a couple of very large hotels and plenty of shops. Ijmuiden is clearly a popular spot for the Dutch and it’s easy to see why. 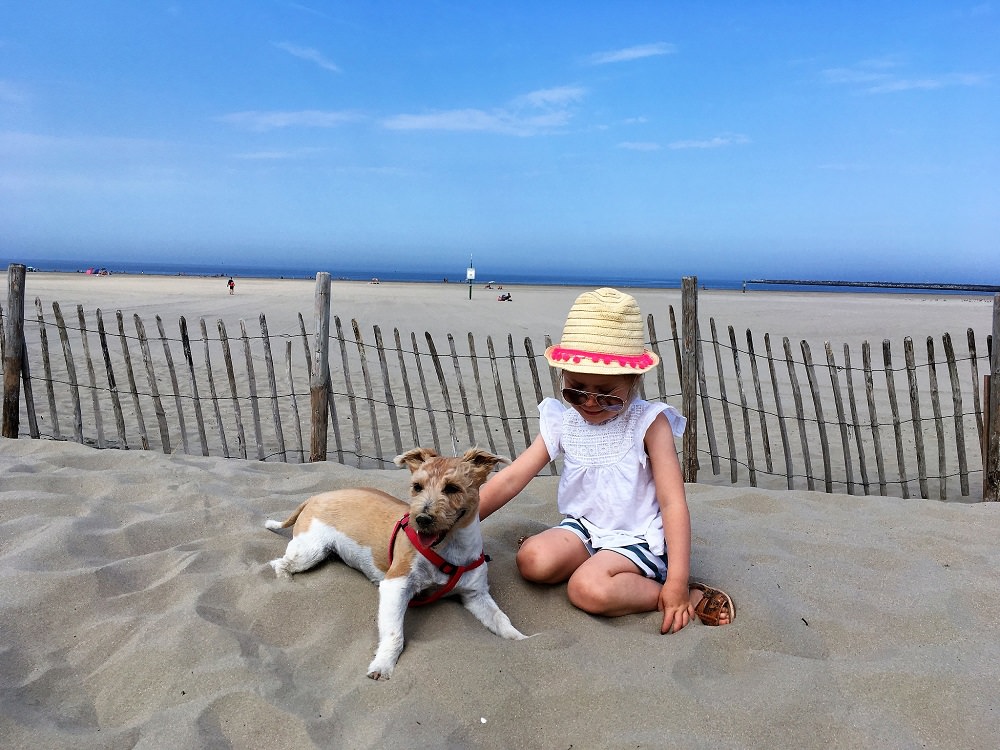 On the Ijmuiden beach

We start off at the harbour, where we watch the children crabbing between the boats, while our dog Falco has a quick dip in the water to cool off.

Once he’s suitably refreshed we walk toward the beach and notice a few signs that aren’t particularly clear about whether or not dogs are welcome on the sand, so I ask a fellow dog owner and discover that dogs can be exercised off lead at IJmuiderslag, at the southern end of the beach, past the hotels, houses and shops.

We stroll along the pleasant promenade, passing surf shops, sailboats and even land yachts. It’s a really pleasant area and I make a mental note to spend a couple of nights here the next time we sail to Holland.

After a good run on the beach, we stop for drinks at Strandpaviljoen Timboektoe which is apparently one of the most popular beach cafés on the Dutch coast.

It’s easy to see why, with a beach volleyball court, large trampoline park for the children and a laid-back vibe reminiscent of an Australian surf club. Oh and Falco is more than welcome here too!

Afterwards, we drive for around an hour to Harderwijk, a charming city that historically traded wool and fish.

The old town is full of history and beautiful sights and has the historic Windmill de Hoop, an authentic windmill built in 1778 which is still used to mill corn today. The children are delighted to find a Dolphinarium here, with sea lion and dolphin shows as well as a number of other aquatic attractions.

Unfortunately, dogs aren’t allowed inside but then Falco would only want to jump in the water with the sea lions so that’s probably for the best.

Instead, he walks around the old town with my wife Alena and cools off by swimming in the Dijk. 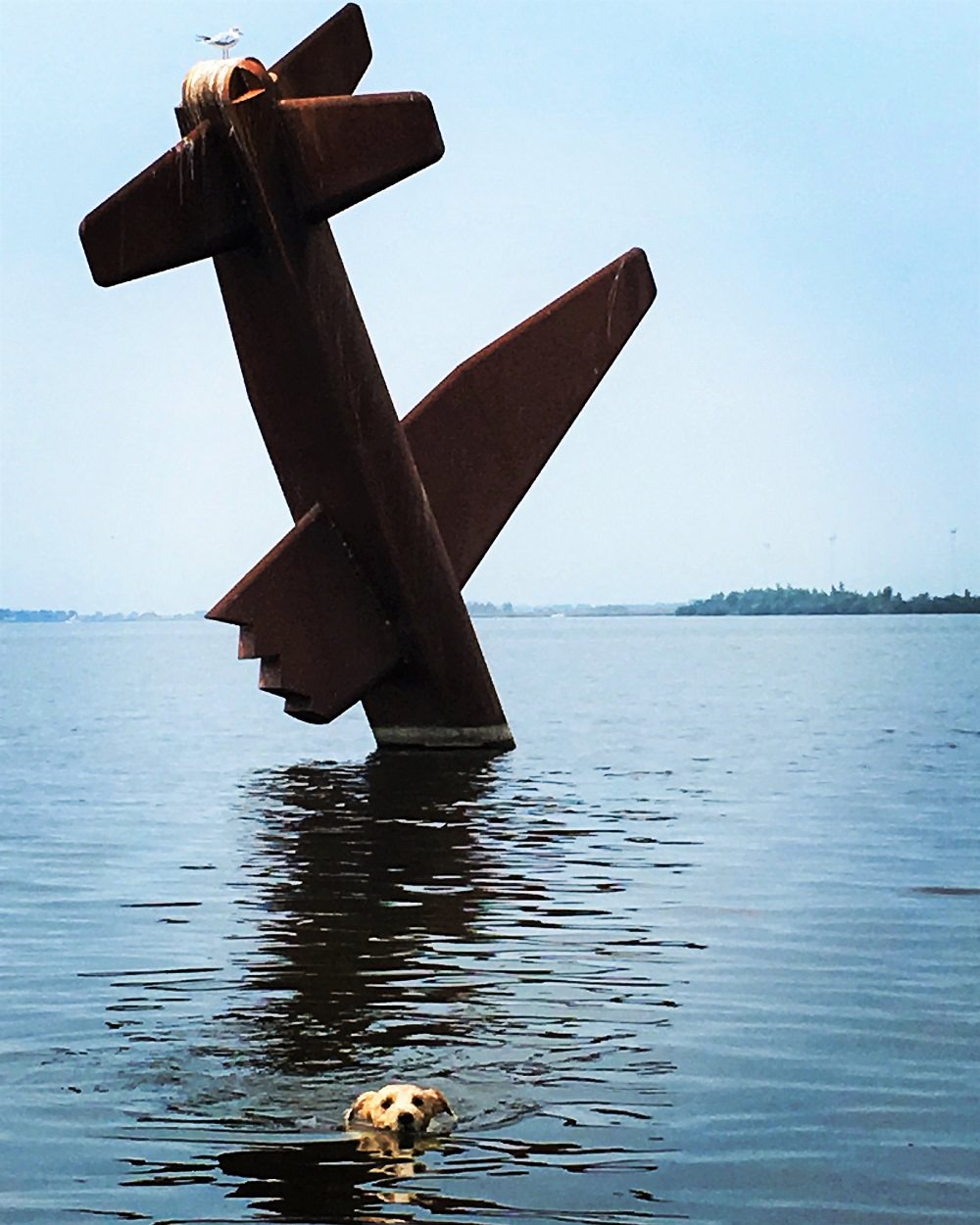 Swimming in the Dijk near dolphinarium

Harrison, Ella and I take in the dolphins and Harrison gets to meet one along the way. It’s a special moment for him and only costs 20 Euros (including the photograph) so he’s happy. 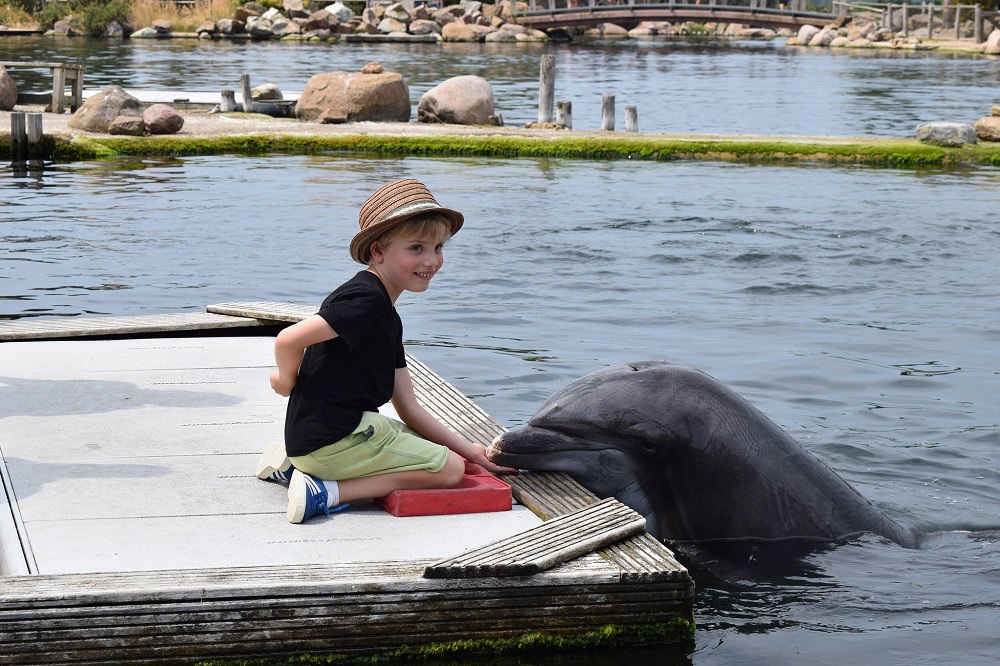 Falco’s pretty happy after his swim too and promptly falls asleep in the car for the next leg of our journey out of Holland and into Germany.

What to do in Cologne with your dog

It takes two hours to get to our hotel in Konigswinter just south of Cologne in Germany.

We’ve chosen the ibis Budget literally because it’s so cheap. Considering that it is so close to such a beautiful tourist area I’m surprised to pay less than £35 for the night. The room is much larger than many other ibis hotels too.

I have written about Konigswinter for K9 Magazine before so I’ll not go into too much detail here, only to say that the castle and palace on the famous Drachenfels mountain are as picturesque as ever and a great starting point for any tour of romantic German castles and rivers. 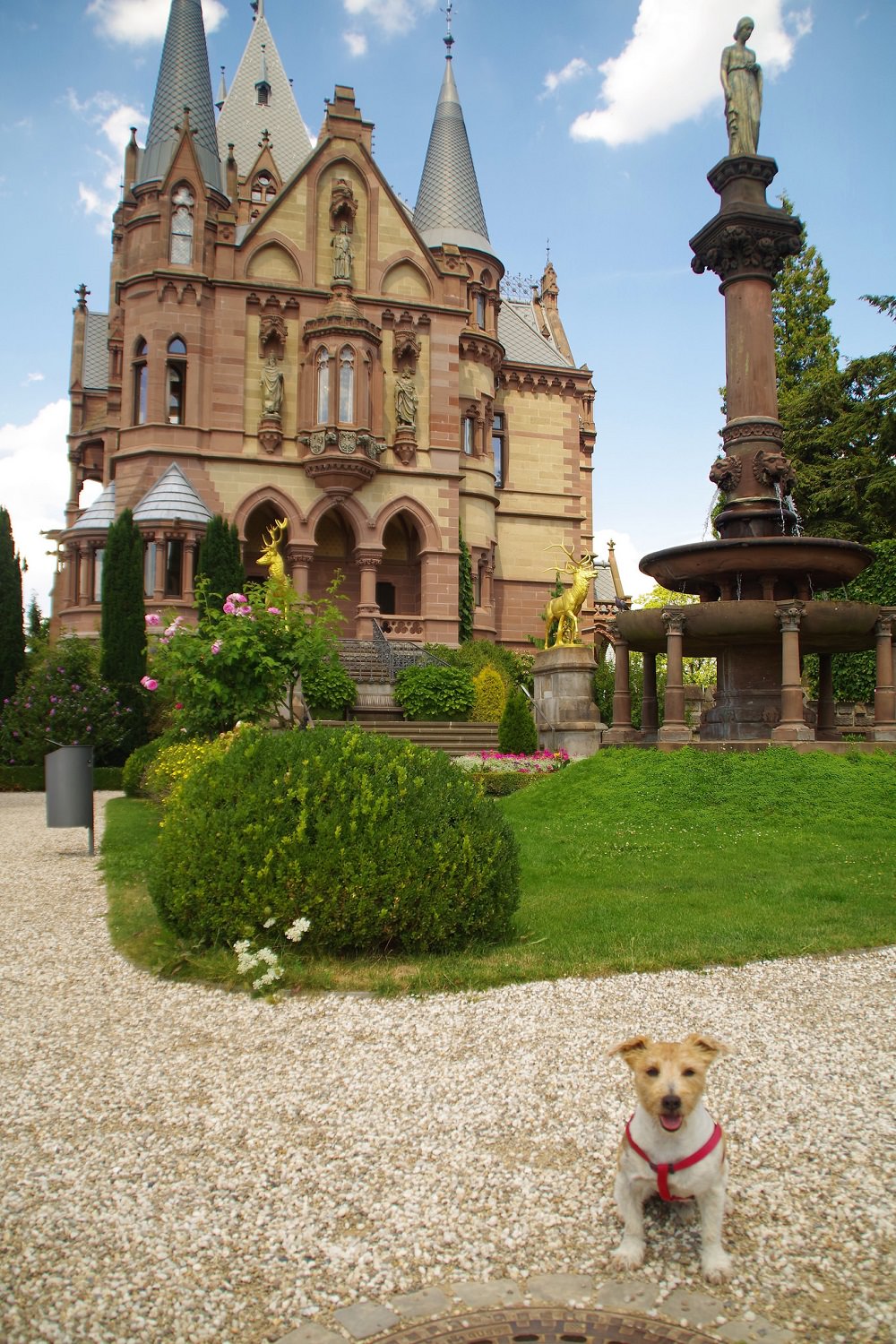 We save time by riding the funicular to the castle at the top and then walking halfway down to Schloss Königswinter.

The thing I love about Germany is that no matter how many times you visit there’s always another romantic castle that you might not have heard of nearby.

So later we drive for around an hour to Wierschem where we park the car for just two Euros and take a 20 minute walk through lush woodland.

It’s a pleasant enough walk, not outstanding in any way until we come to the final bend in the path and find Burg Eltz, one of the most striking and one of the most unexpected (hidden as it is in the forest) castles I’ve visited. 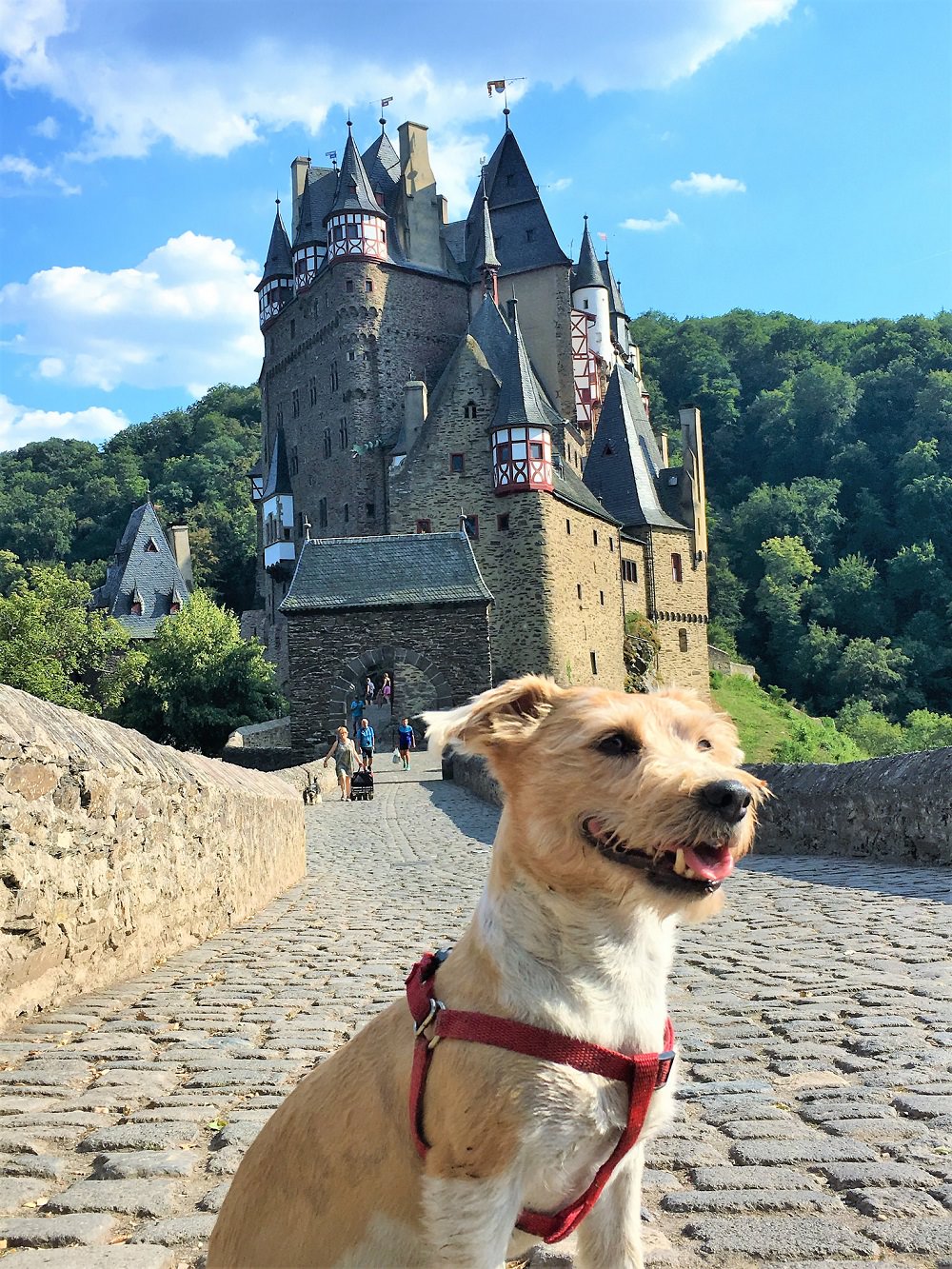 There’s also a distinct shortage of tourists for such a lovely spot.

We see hardly anyone along the walk and even the castle itself is fairly empty despite the fact it can also be reached by a shuttle bus from Wierschem, where we parked our car. 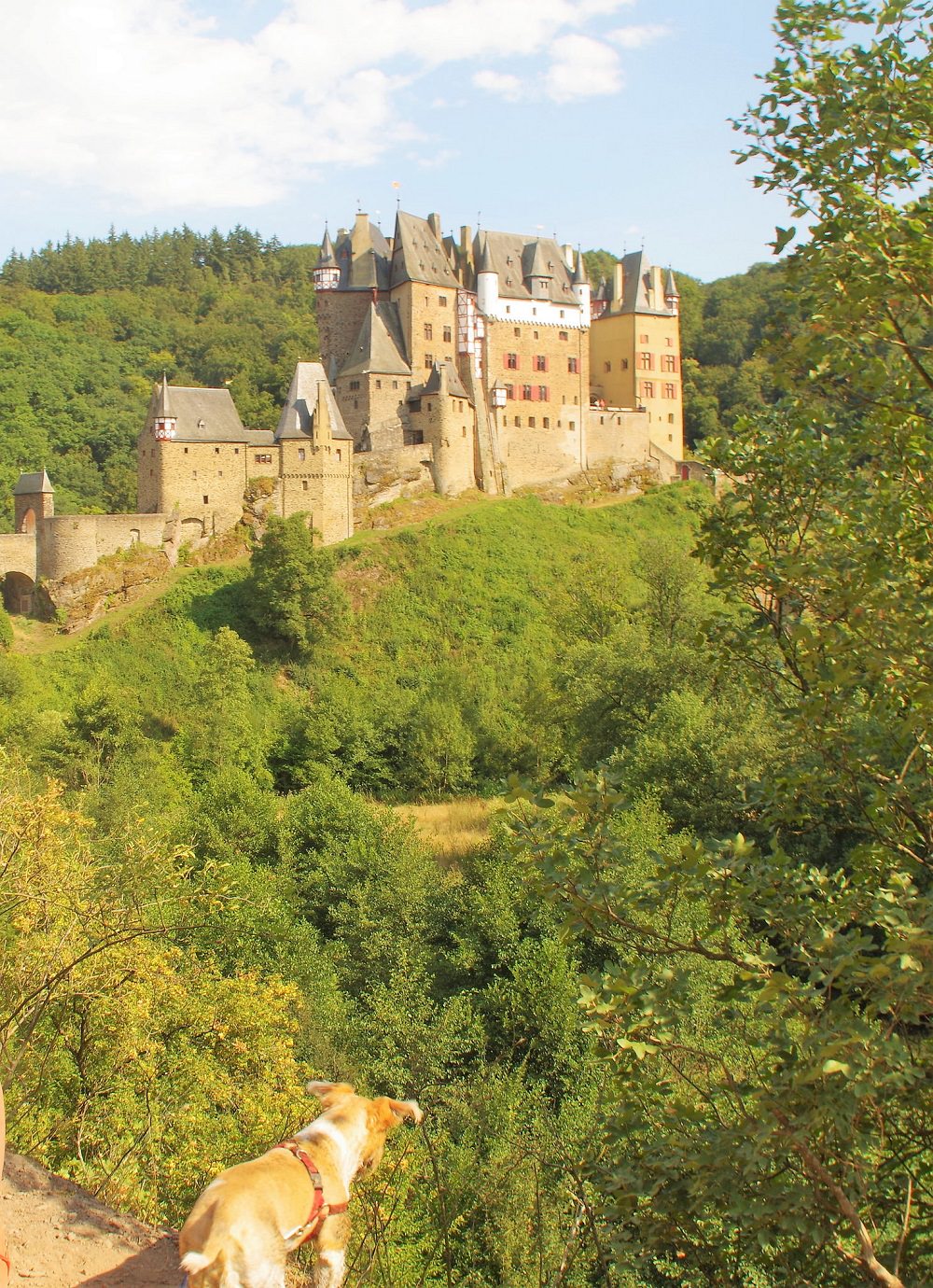 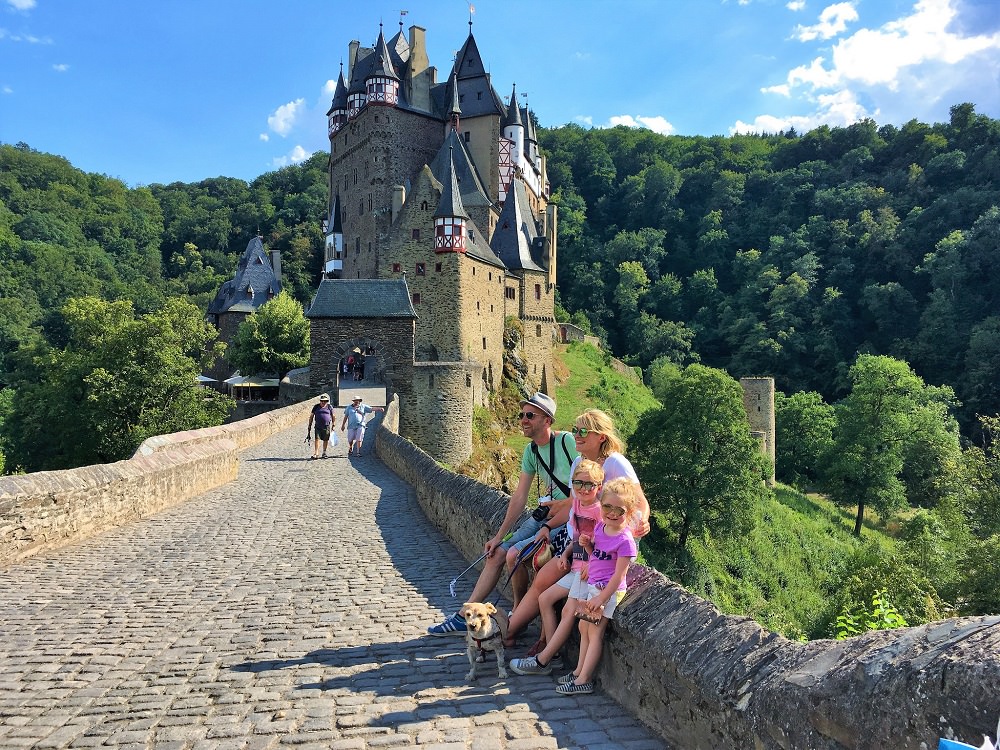 It’s pretty hot and the children are tired so we ride the shuttle back and then drive toward our next hotel in Frankfurt.

After all the walking and climbing Falco and the kids are asleep in no time so it’s a peaceful drive taking in the River Moselle and the Rhine, passing countless vineyards and picturesque villages until we get closer to the beating heart of Germany’s economy, where the villages start to give way to large expanses of industrial buildings and the road turns into a series of motorways. Planes land overhead every thirty seconds or so as we approach our next hotel. 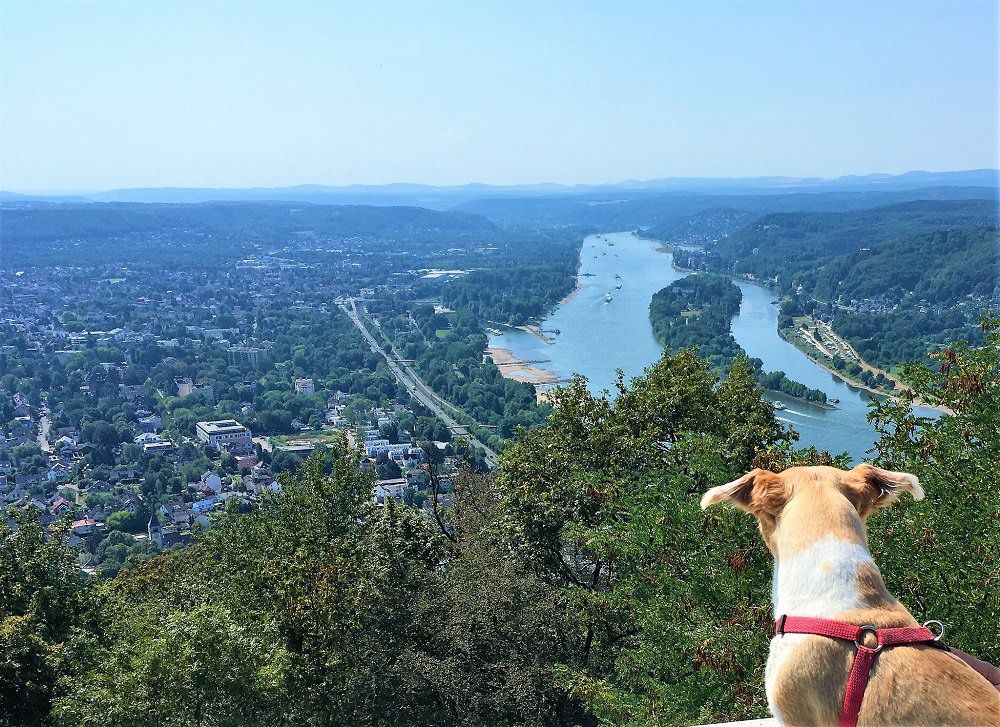 We discovered the Mercure near Frankfurt Airport six years ago on a trip to Slovakia and I’ve been meaning to return ever since.

The hotel is pleasant enough and has a swimming pool in the basement, but it’s the quiet lake hidden behind the hotel that Falco is interested in.

The water is clear and clean but swimming is forbidden for humans (as it’s a conservation area). Not so for dogs though and Falco has a dip with no less than five other dogs before we retire for the night, ready to face Frankfurt the following day.

But you’ll have to wait until next time to read about that.