When you start to realise your dog might need to switch foods, how long do you give it before you decide it's time to bite the bullet and change and not just a short spell that will pass?

About three months ago I started to realise that what we were feeding Danny and Chris was no longer working for them. Whether the recipe changed or what triggered it I don't know, but they seemed to be enjoying the food less, their skin seemed drier and Chris's motions were, well, infrequent. 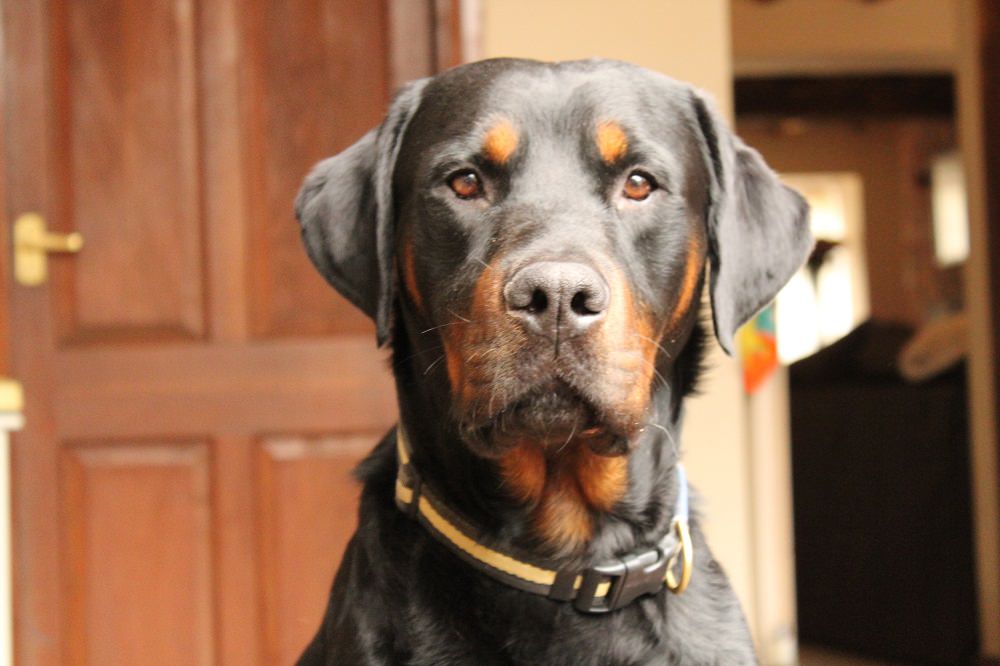 It seems more than a short spell so I started researching diets that might be suitable for two lively young adult boys. I've researched raw dog food before and Chris enjoyed a spell on it as a puppy but have never used for a long period of time, in part due to freezer space. 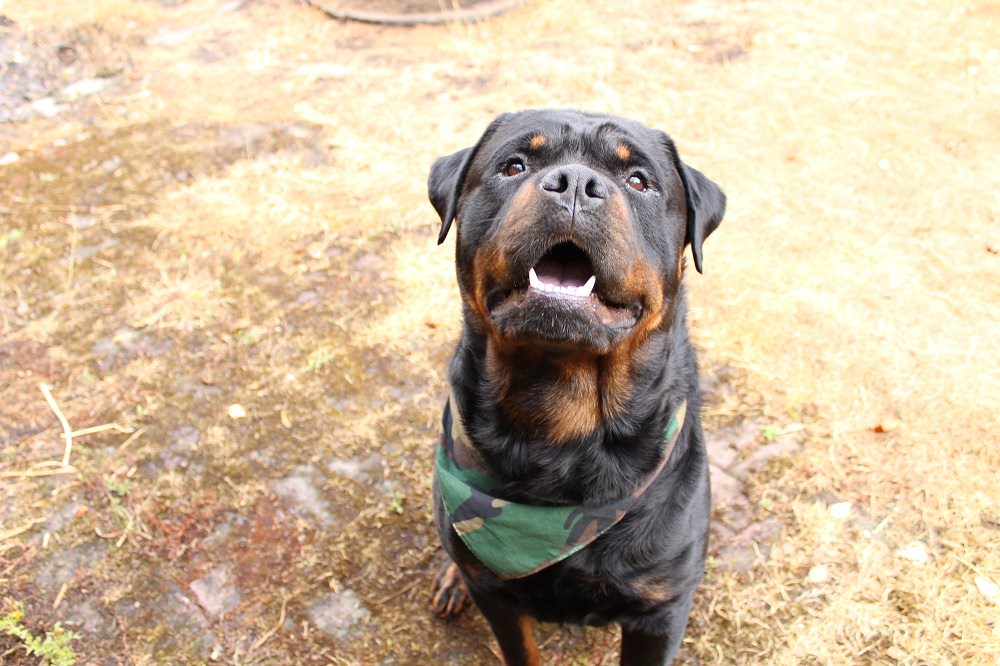 However I decided to bite the bullet, switch and go raw and as it turns out, it might have been the best thing I could have done for Mia, my 12 year old Rottweiler, who was recently diagnosed with Inflammatory Bowel Disease. She was originally nothing to do with the review but she discovered something very special that I hope will help other dogs. 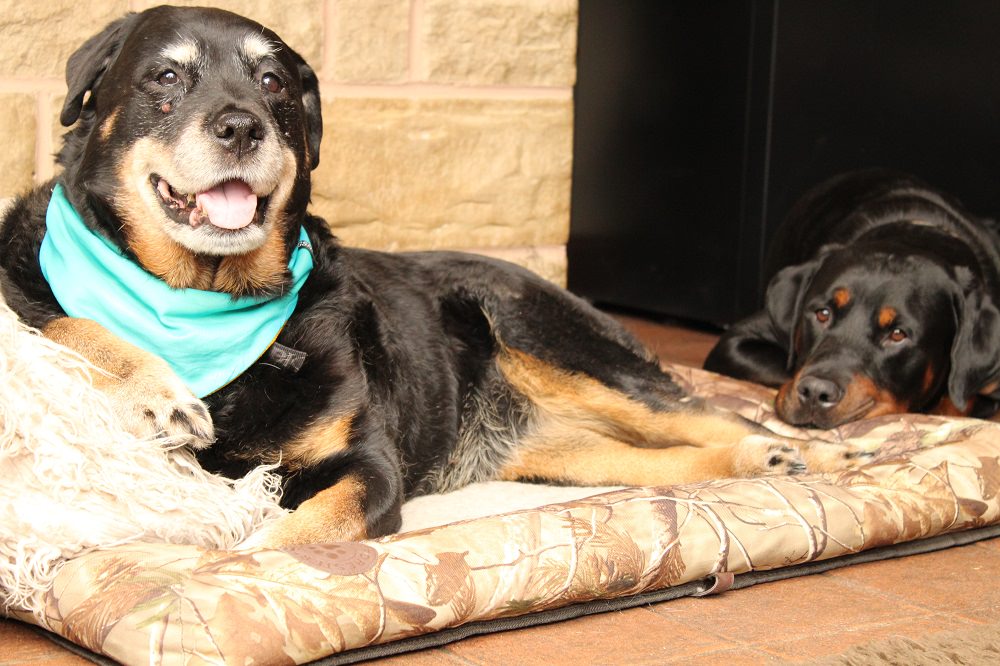 Big packs because with two large dogs, I knew the amount of food they'd need would mean I'd be going through a lot of packs in one day.

White meat because Chris has always been picky with a sensitive stomach. I felt white meat, at least in the early days, was the best option to begin with. 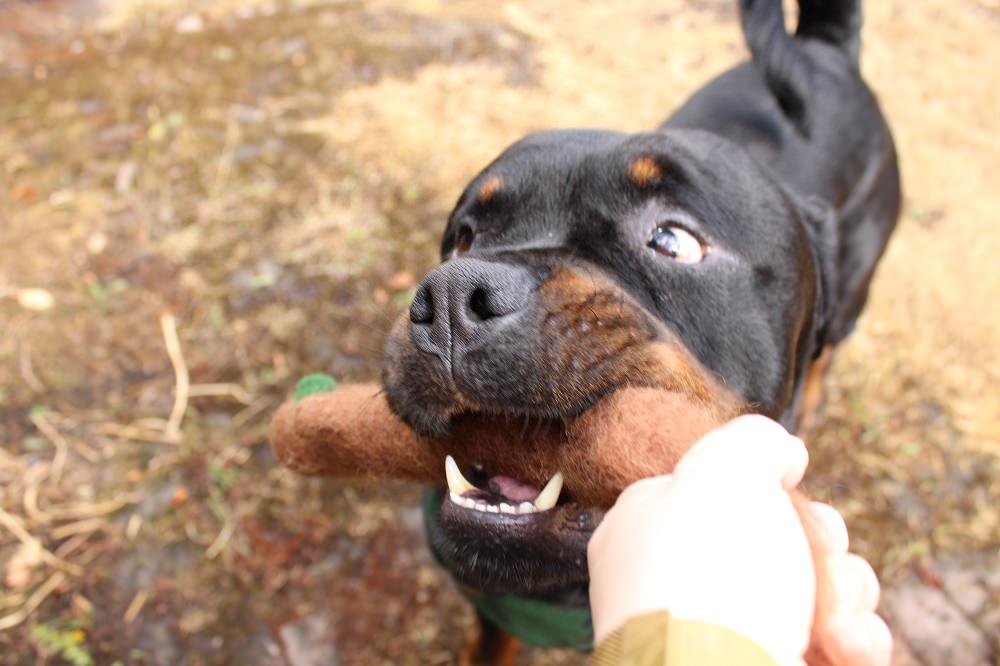 And more freezer space because I wanted to make sure I had enough for around a months worth of food at any one time - and frankly, there's only so much of my ice cream space I'm willing to giveaway in our own freezer.

I got in touch with Natures Menu to describe the boys, their lifestyle and Chris's habits, including how he is sometimes sick in the early hours if his system burns through his food quickly and he's left empty by morning time.

They recommend we look at their 1kg bags of their Country Hunter Superfood Raw Nuggets, (£4.25/1kg) specifically the rabbit variety which is made up of 80% rabbit and around 20% from fruit, vegetables and extracts from yucca, green tea and grape seed. It's also grain and gluten free. 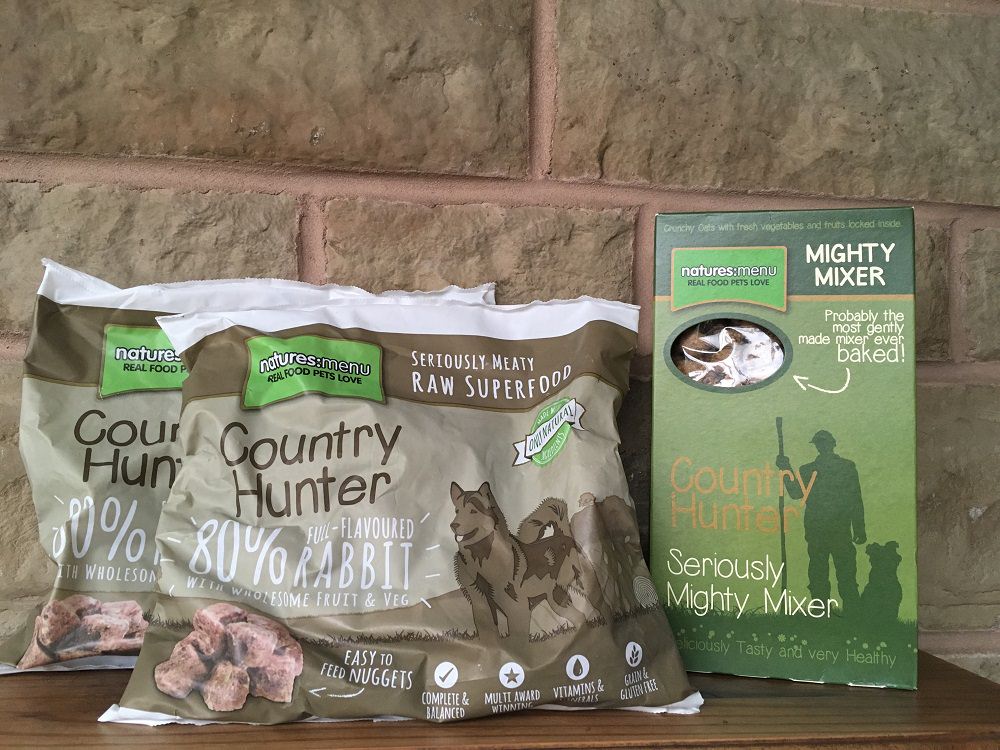 Working out how much they would need per day, we realised we'd be going through around 34 nuggets each per meal (breakfast and tea), give or take, depending on whether they needed more added in. 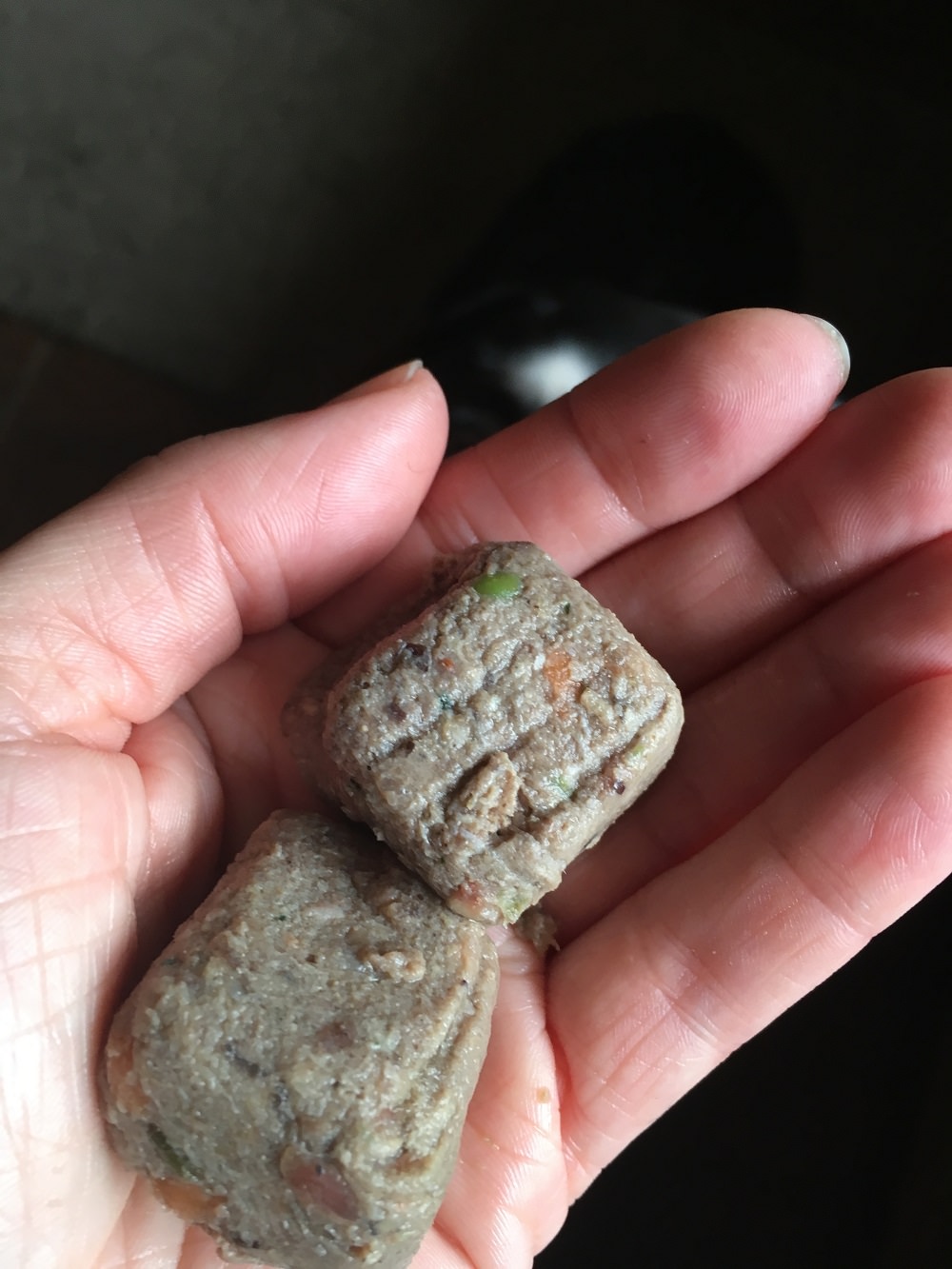 Our boys have been used to a mainly meat-based diet for years and are already quite lean, but Natures Menu had told us that some dogs do experience weight loss when transitioning to a raw diet because of the high protein content compared to dry foods which have more carbohydrates than raw, so, although the nuggets are a complete food in their own right, we decided to add in a handful of Seriously Mighty Mixer Biscuits (£4.99/700g) to both boys meals initially to help keep Chris full and add a few more carbs in to stem any weight loss during the transition. 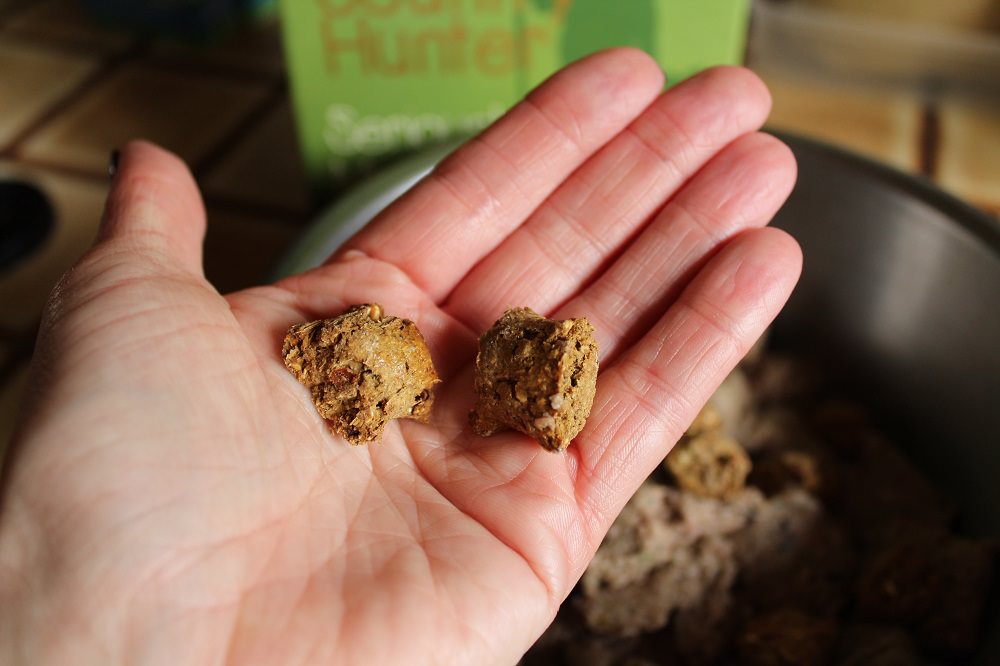 Natures Menu told us some dog owners mix in some other forms of carbs, such as cooked sweet potato, cooked brown rice or rolled oats, and then reduce down for the same purpose.

Once we had decided that we would try the boys on the Country Hunter raw rabbit nuggets and stick with it for at least two months to give a good trial period, we set about ordering a freezer which could handle the volume of food needed. 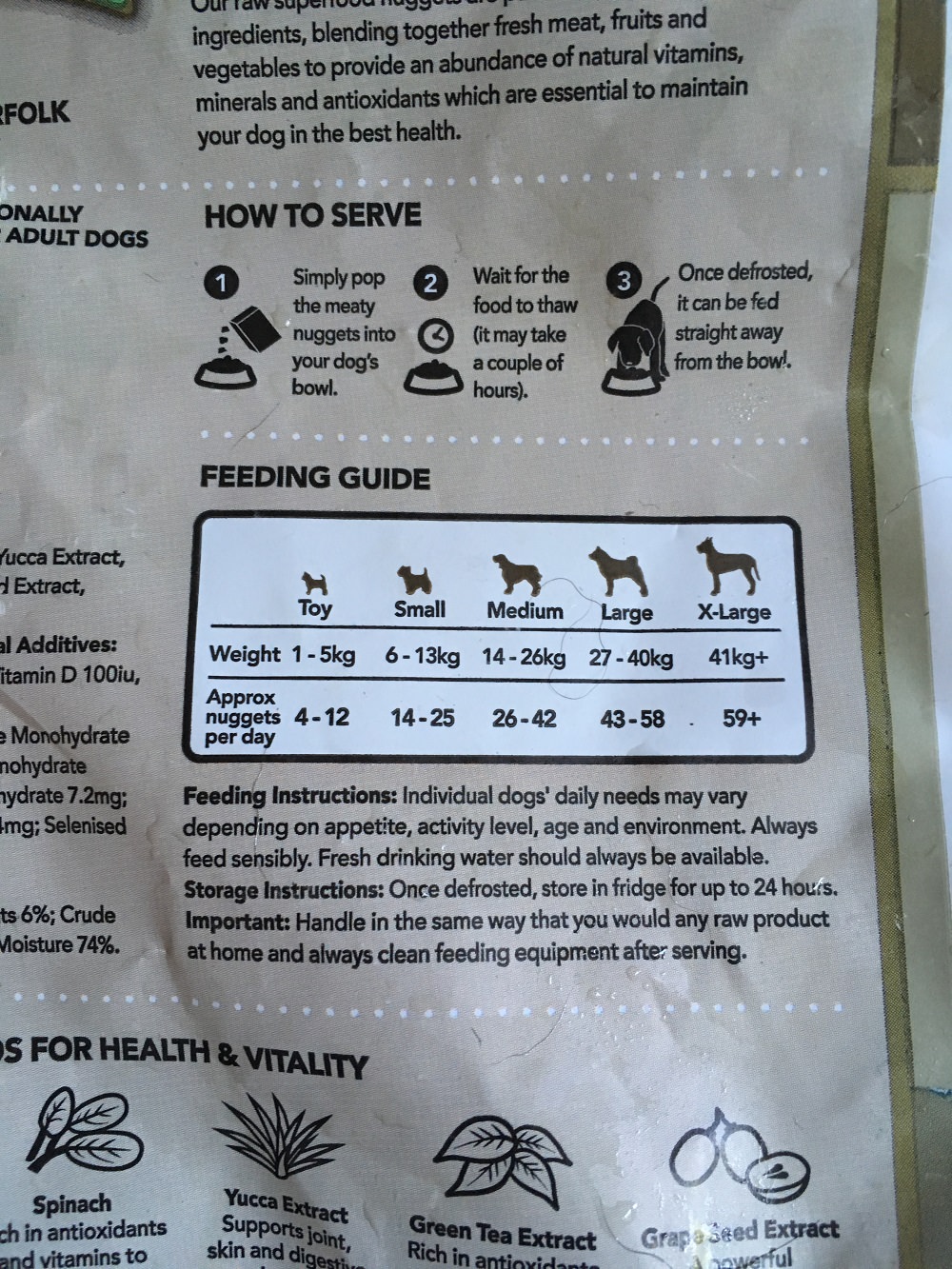 We chose a 99 litre freezer and for anyone who might be considering switching to raw, this is a fairly compact freezer and it fits around 85% of what our boys need for a month in.

You can either defrost one bag and keep in the fridge for 24 hours or take just what you need to defrost and leave the rest of the bag in the freezer. If you do keep in the fridge, make sure you rest the bag of food in some kind of a container to avoid any juices from the bag spilling out into your fridge. 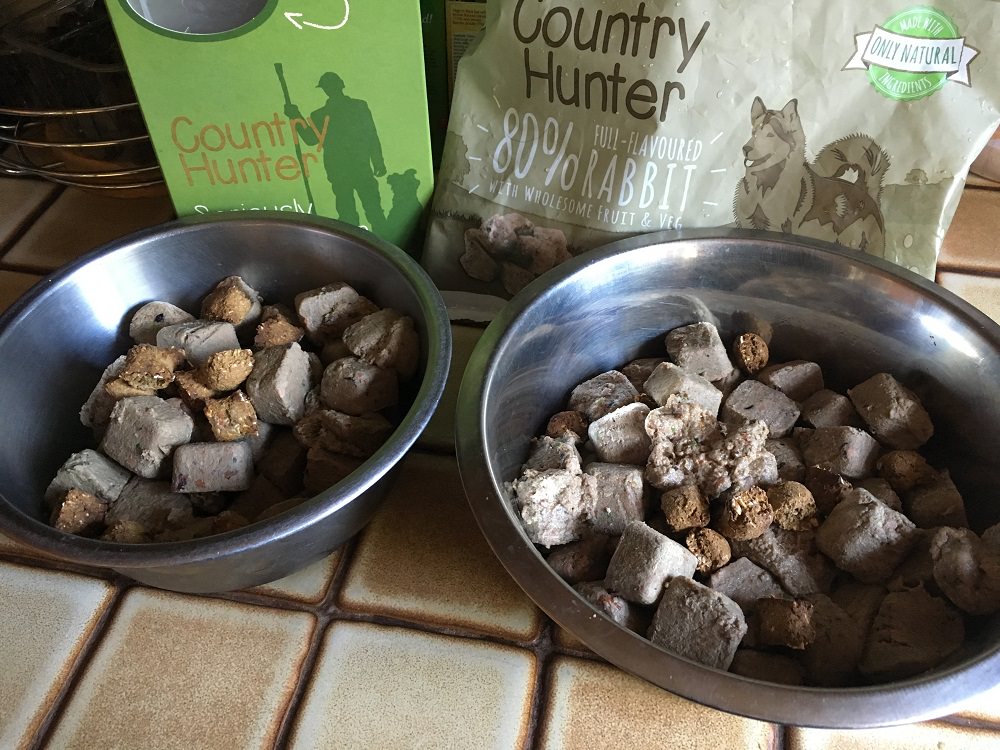 We go through around 3kg of food each day and have two bags defrosting per meal time, so we plough through relatively quickly and in some cases, I mixed in frozen with defrosted for a bit of a change and to give them a frozen treat on warm days.

We transitioned them onto the raw nuggets over a few days, they seemed to take to it quite quickly so whereas sometimes you transition slower, over say 7-10 days, the boys coped well quickly so we made the switch at their pace. 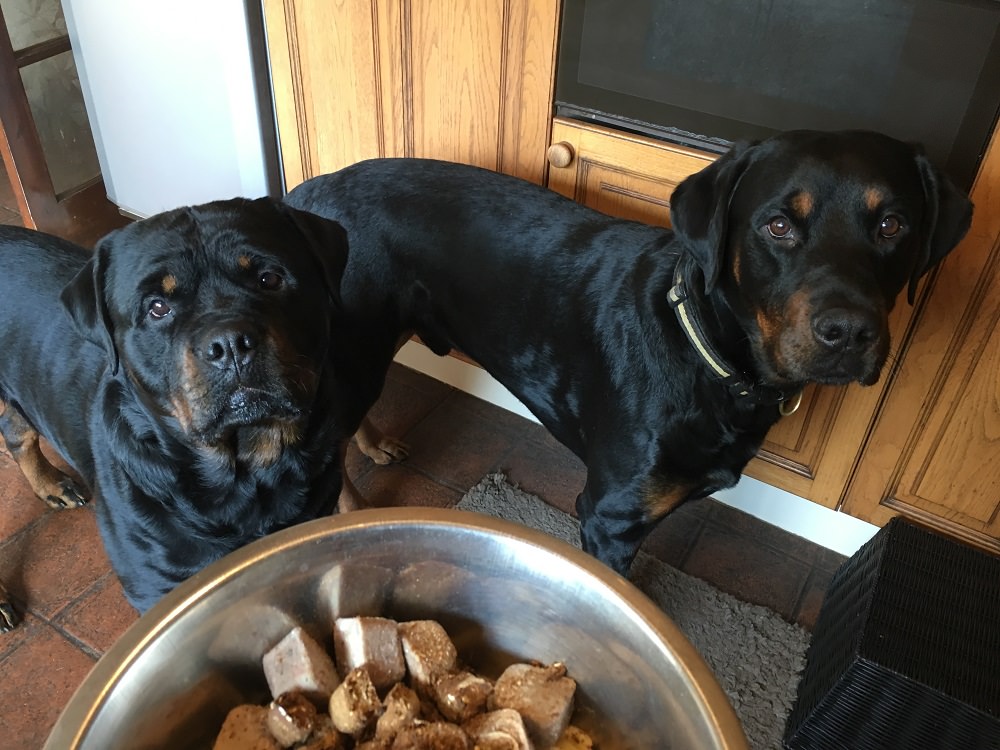 The biggest change was to their toilet habits, TMI I know, but good god, the size and frequency! For Chris, this has been brilliant. He was a dog who would 'go' once a day. He would head off into the garden after tea and get distracted, not go and that was that, nothing could make him. On this diet, the boys' feet only had to touch the grass and that as was that.

Natures Menu tells me this is not uncommon because their food (and most likely the same logic applies to most raw foods) is less processed so there is less for the dog's body to break down and more of the ingredients can be utilised within their bodies.

At the same time as seeing this - quite honestly poo has never been so discussed in our house - Mia had been going through treatment for Inflammatory Bowel Disease (IBD), diagnosed after having an upset stomach for a period of time, gone off her legs, undergone rehab to help her walk again and grown a couple of lumps.

At the end of her first course of treatment for IBD, we had to give it a couple of days before having new blood tests done to see if any progress had been made to repair the damage in her intestines, which we hoped might give us a clue as to the root cause of the problem.

Within a day, her upset stomach had returned and we decided we needed something fast acting to stop the diarrhoea. We decided to give her some of the boys' Natures Menu raw nuggets.

Within hours, literally a morning, it had stopped. With the weather ridiculously hot and the risk of becoming dehydrated through heat and stomach issues a real concern, frankly, it felt like a miracle.

The nuggets themselves are appealing to the eye. I liked the fact I could see the natural ingredients, the fruit and veg, inside the nuggets because it made me feel I was really actually feeding something quite good for them. 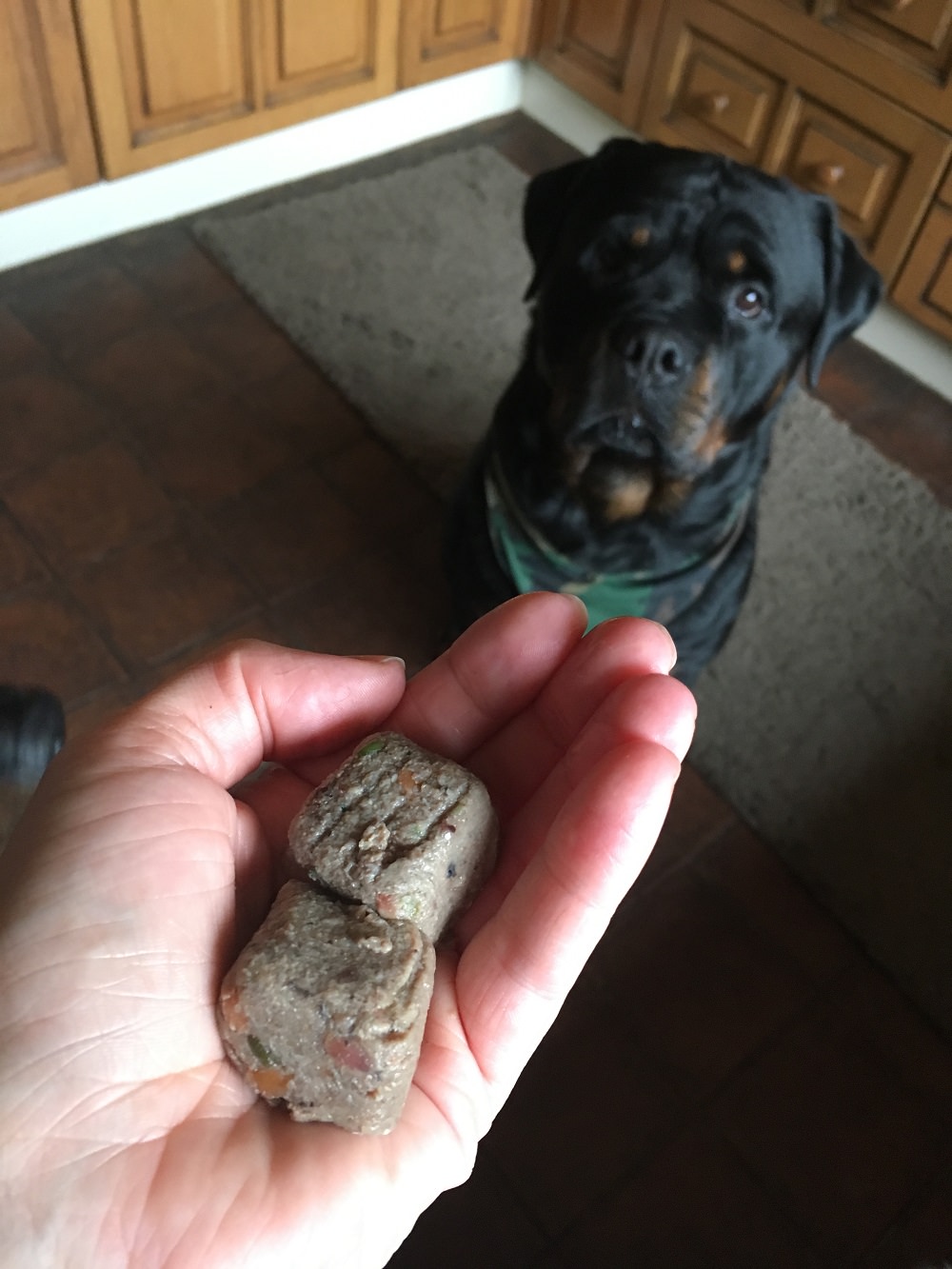 I also like the fact the packaging is minimal and recyclable.

Our dogs took to the food straight away, even Chris who is frankly the fussiest dog I've ever known. Usually, if you give him something he's not tried before, he rolls it around in his mouth before running to either lab one (a rug) or lab two (a bed) and inspecting before he decided to eat. 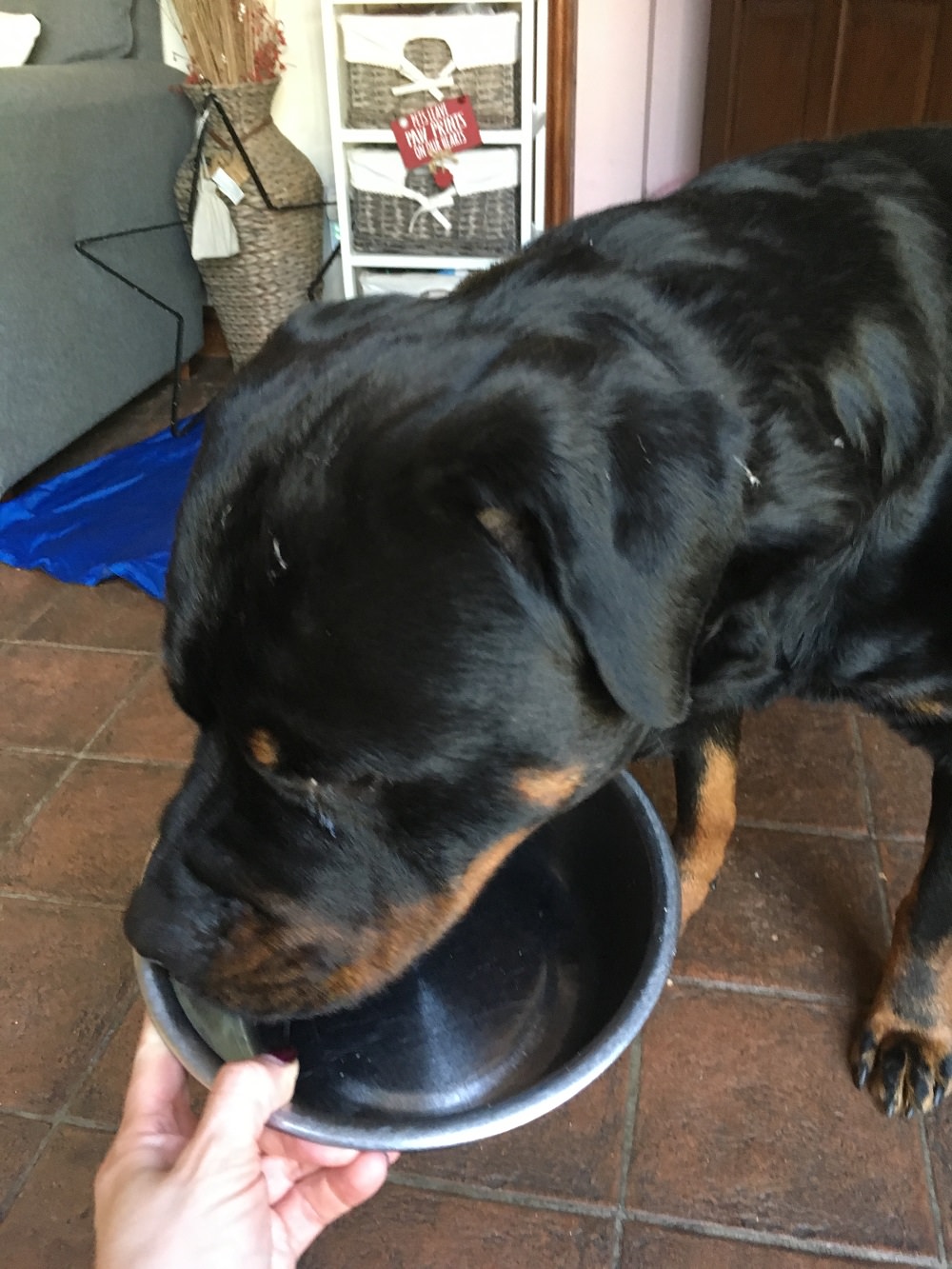 We do feed quite a lot which makes the diet quite pricey if you have large dogs and multiple dogs eating it, but our dogs have done very well on it and I've recommended it to friends whose dogs might have been in the same boat as ours or that have stomach issues like Mia because quite honestly, this diet was a lifesaver for her with IBD.

She now has a mix of carbs, rice or pasta, with the tinned variety of the raw food, which is essentially the same mix of ingredients but cooked in the tin. It feels a little richer too, in the quantities the boys need each day it's too rich for them, but for Mia, it's just right. 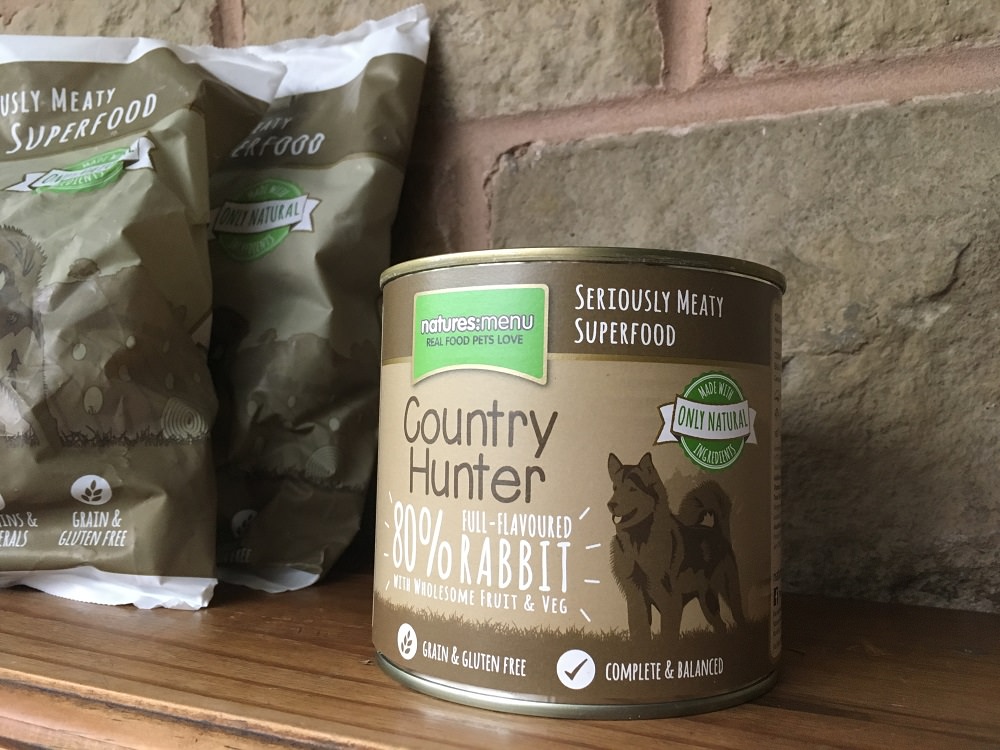 As for the boys, they've continued to do well over the two month review period.

Chris has been kept full, so his sickness has been kept to a minimum, their dry skin - although it can't conclusively be put down to the diet - does seem to have lessened and although eye issues also can't be put down to diet alone, many people who have switched to a natural or raw diet have noticed that eye discharge and tear staining has either reduced or stopped completely.

All in all, it's been a successful review period for them, and particularly for Mia. 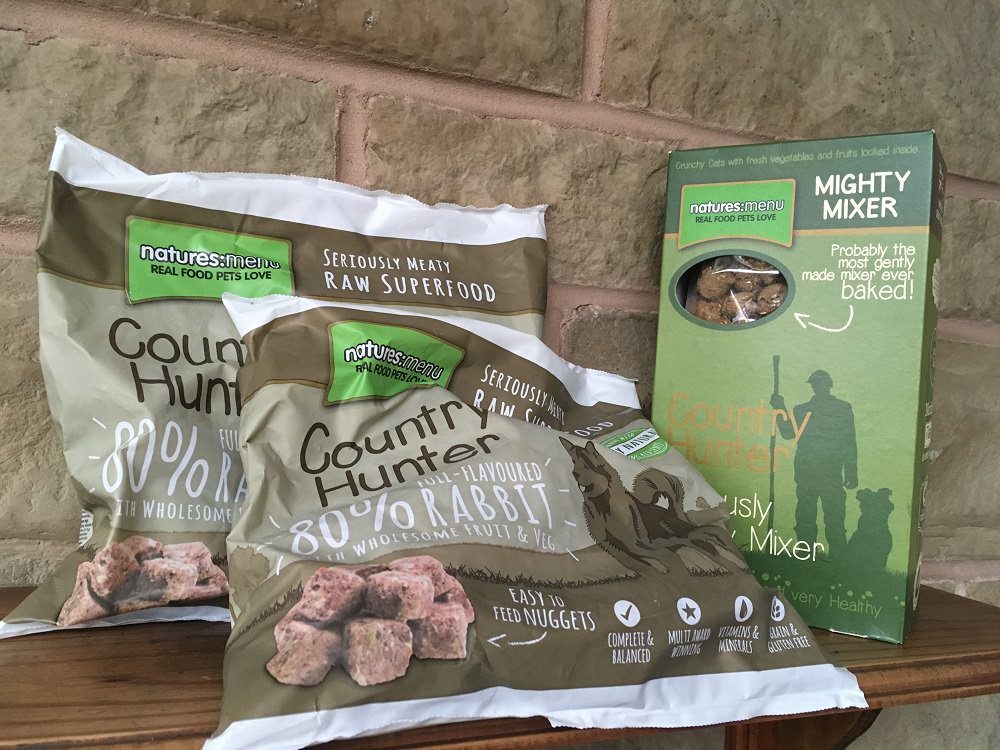 Many thanks to Natures Menu for helping us to prepare for the review and advising along the way. Find out more about their complete raw and dry foods online at www.naturesmenu.co.uk