Earlier this month Ariana Grande, a well known adoption advocate, introduced a new pup named Lafayette into her home to join her brood of six dogs.

The one time Disney sweetheart turned Dangerous Woman is clearly someone who loves dogs and as such they've been a big part of her social media presence for as long as we can remember, so we've decided to delve back into Ariana's Instagram history to bring you a recap of who's who and some of their funniest social media moments. 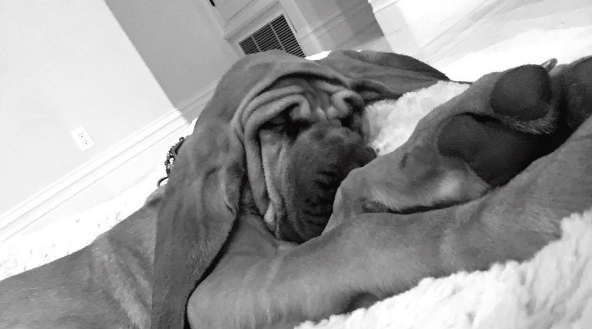 Here are the six dogs Lafayette, pictured above, has joined in her Grande new home. If the video below is anything to go by, she's settled in brilliantly!

Meet Coco, Ariana's first dog. Coco is a Dachshund cross German Shepherd and has her own Twitter account.

While Instagram was still a young pup itself, Ariana took to Youtube in 2012 to share a vlog of her interviewing Coco about her music to find out what she thought.

Meet Toulouse, a Beagle cross Chihuahua adopted in 2013. Toulouse is named after a kitten from the Disney movie 'The Aristocats' and Ariana's second dog.

Toulouse has even taken part in an ad campaign with Ariana for Coach to raise awareness for animal rights.

sooooo I wasn't kidding. @coach #coachpups I'm so incredibly excited to have my lil baby Toulouse starring in the Coach Pups campaign and to partner with Coach in efforts to protect pups from cruelty and harm, a cause most near and dear to my heart. So thankful to @Coach for their generous donation to NKLA, a Best Friends Animal Society Initiative to make LA the nation’s largest no-kill city by 2017. proud of my babe, Toulouse-y goosessss. from rescue to runway!!! I love you with all my heart.

Meet Ophelia who was the third pup to Grande family and is known as the 'Queen of Vocals' at home.

Meet Cinnamon, this sweet little girl became a part of Ariana's family in late 2014 and has promptly mastered the perfect selfie.

Yep, this gorgeous girl definitely knows how to work the camera making her the perfect sidekick to Ariana's snapchat videos.

Meet Sirius, who alongside Toulouse accompanied Ariana on her 'Honeymoon Tour'.

Meet Strauss the mouse! Ariana adopted this little Yorkie from ARF (Animal Rescue Foundation) Tulsa before a concert. Alongside Strauss the singer met seven other dogs and paid their $150 adoption fee for the pleasure of meeting them, as well as 12 other dogs, meaning 20 dogs were able to be adopted at no cost.

We think Ariana's caption sums it up below.

you can't even imagine how this little one has changed my life. #strauss #themouse

She certainly is a woman who loves her dogs and a huge animal adoption advocate, which is fantastic to see. We can't wait to see what the Grande family on four legs get up to next!