Growing up, Capital FM DJ and presenter Aimee Vivian desperately wanted a dog after falling in love with her grandparents' dogs. She tells us she remembered asking for a dog constantly but her parents always said no.

After finishing university, she went home to plan what she would do next. Knowing her dad had a special place in his heart for Bulldogs, she set about achieving her ambition of becoming a dog owner by introducing her dad to a Bulldog puppy.

It worked and a chance meeting with a litter of Pugs meant she came home the proud owner of two dogs, Daisy the Bulldog and Eva the Pug, both now six-years-old.

Aimee tells us her girls are super close and shares what life was like during lockdown presenting her radio show from home with the help of her two dogs.

Hi Aimee, thanks for your time. Tell us all about your dogs.

Hi! I have two dogs, a Bulldog called Daisy and a Pug called Eva. They’re both six-years-old and were born a week apart. 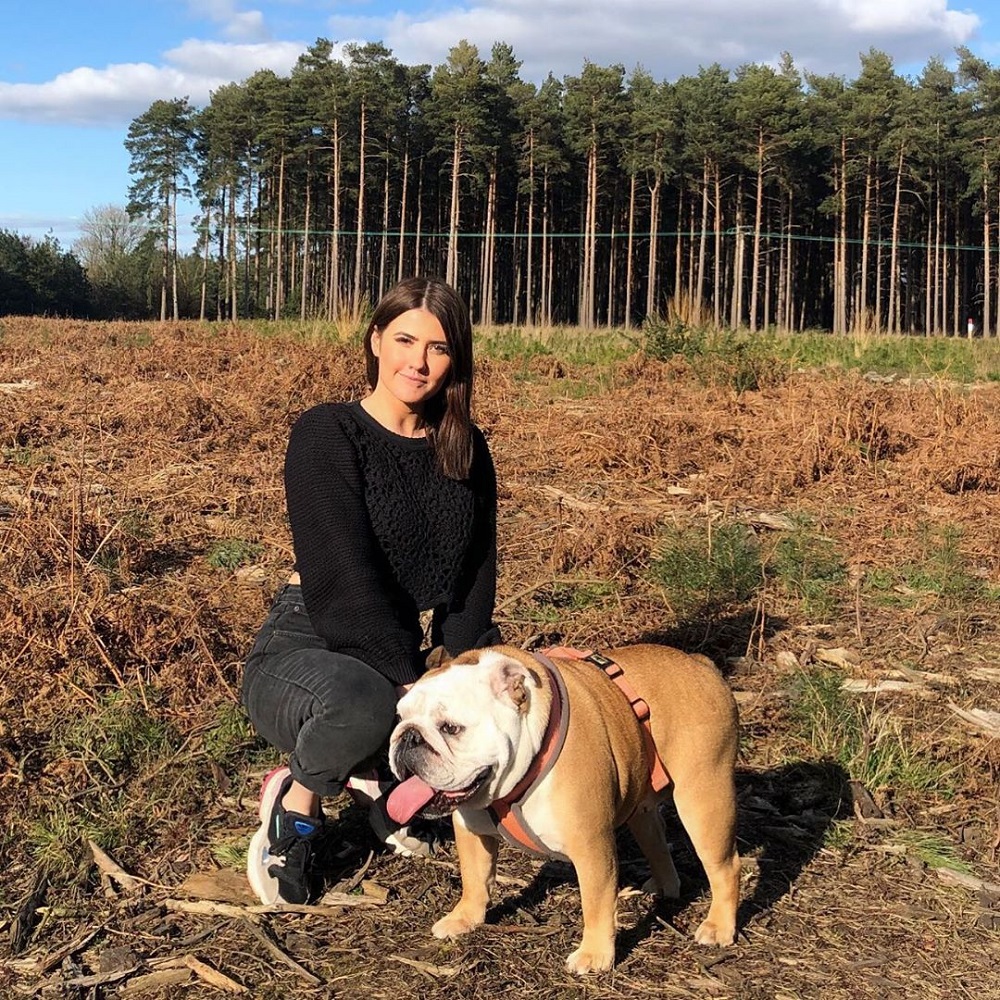 Are they your first dogs?

They are. My grandparents had a smallholding and so through them, I grew up around dogs, but Daisy and Eva are the first dogs that are mine.

Every birthday and Christmas when I was growing up I’d ask my mum and dad for a dog and they’d always say no because my mum and I are actually allergic to animals, but I was adamant that I really, really wanted a dog so when I came home after university, I must have been home for about a year by then, I just turned around and said to my dad ‘I’m getting a dog, look at this Bulldog puppy’ and I knew he’d fall for it. So we went to see Daisy at the breeder’s and little Eva was there. She was the runt of her litter and she had quite a sad story actually.

No one wanted Eva because she was the smallest in her litter, so me and my dad thought ‘well we can’t leave her’ and so she came home with us too.

As a first experience, how was it raising two puppies together?

Well, at the time you think it’s going to be fun. You feed one, what’s the difference feeding two and so on, but it’s actually really hard (laughs).

Being the same age and living together from such a young age, are Daisy and Eva close?

Yeah, well they’ve never been apart so they’ve been together forever really. I can’t imagine them not together. They’re like sisters. 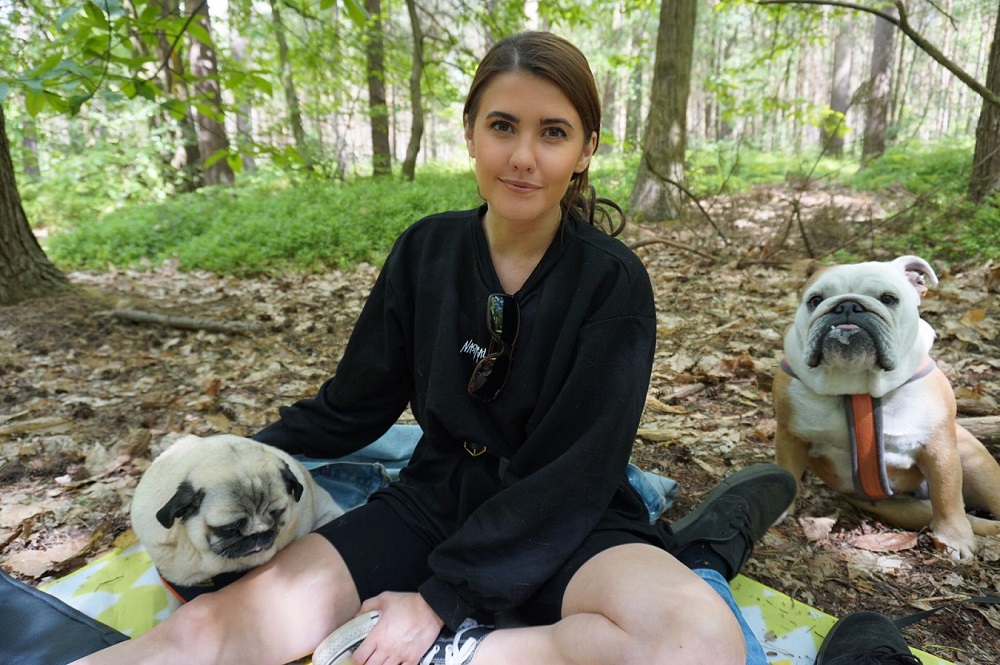 Pugs and Bulldogs can have a few health complications. What made you choose their breeds, or Bulldogs specifically since Eva was an unexpected bonus?

I needed a dog breed that was short-haired because of my allergies and I’ve always liked the look of Bulldogs, but truthfully because my dad had always wanted a Bulldog puppy, and I wasn’t fussy I just wanted a dog, that was what drew me to Bulldogs. I knew that the Bulldog factor would get my dad on board really (laughs).

How have the girls been?

I’ve been very lucky. Daisy had to have two operations on her eyes for entropion because she had in-grown eyelashes but other than that, they had no health problems.

I think because I grew up around animals, my grandma bred dogs, I knew how to research breeders so I felt I knew how to make sure that Daisy’s breeder was of a good standard and that she wasn’t going to have health problems, or I’d at least minimised the risk of it happening. So I did a lot of research and did my best beforehand.

And from your research, you must have also been able to prepare yourself for what could happen?

Yes, exactly. I knew the worst-case scenarios and what I was getting myself into.

I think it’s really important if you’re getting a puppy that you do lots of research about the breed and breeder, and if you’re rescuing it’s still important to do your research. 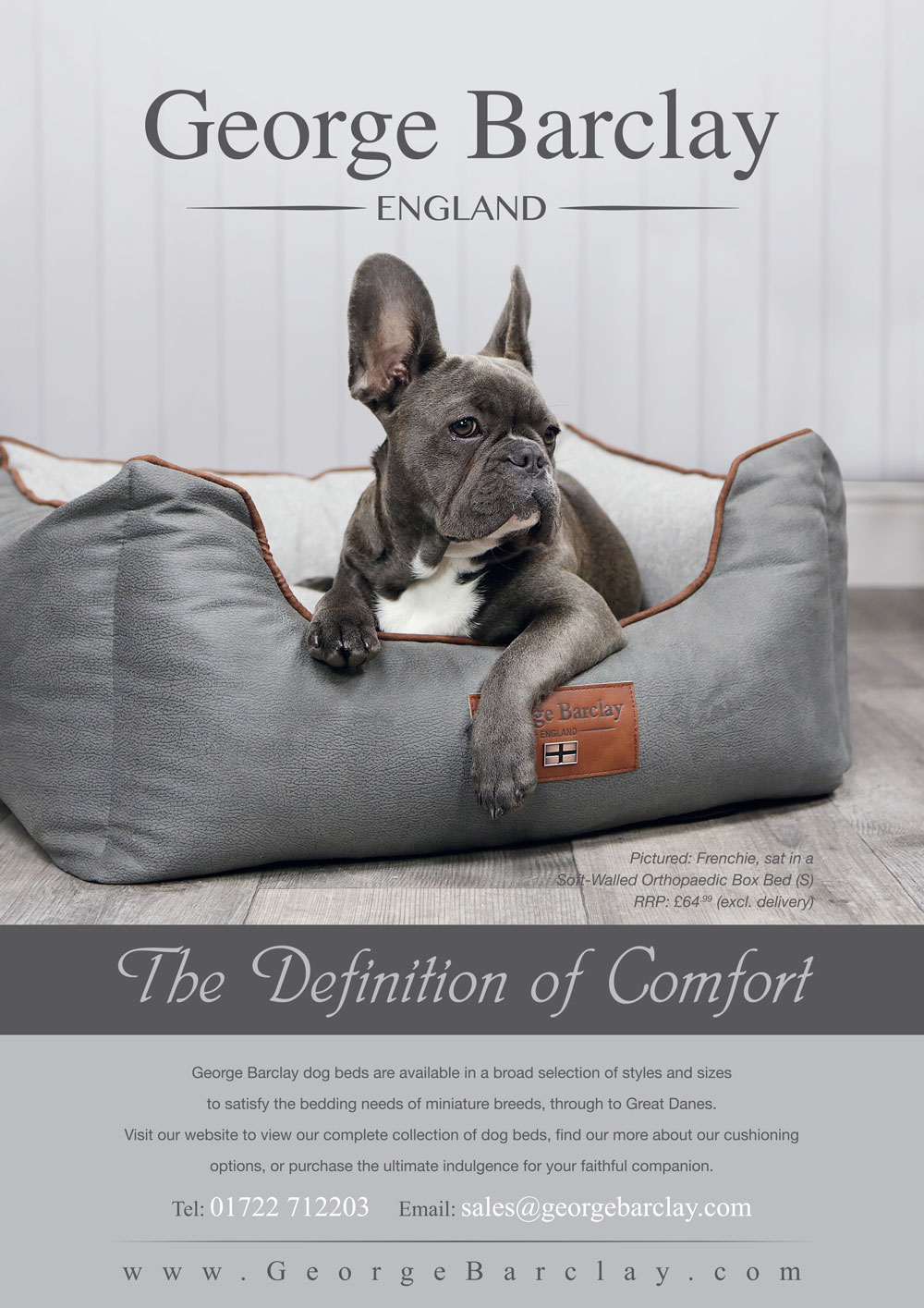 We run dogsblog.com which is the UK’s largest dog adoption site and I do think a lot more is known about rescuing nowadays, especially around the myths about dogs in rescue.

Yes, I think so. I definitely know a lot more now than I did six years ago.

I’d always now look to adopt a dog, but I think six years ago there wasn’t as much known or spoken about regarding puppy farming and bad breeding.

What does a typical day for you, Daisy and Eva look like?

Well, on a typical day Daisy usually wakes me up by barking from downstairs because she wants her breakfast and food is the first thing she thinks about. So I usually feed them at around 7.30am and then after that, all she wants to do is sleep. So while she sleeps I do my planning for the radio show.

Then we go for a little walk and depending on what day it is, sometimes I then take them to my dad's office and they will go and hang out with him all day while I go into London, or if not, they will chill at home and when I come home we’ll go for a nice long walk. We’re very lucky to have some really beautiful areas around where we live. 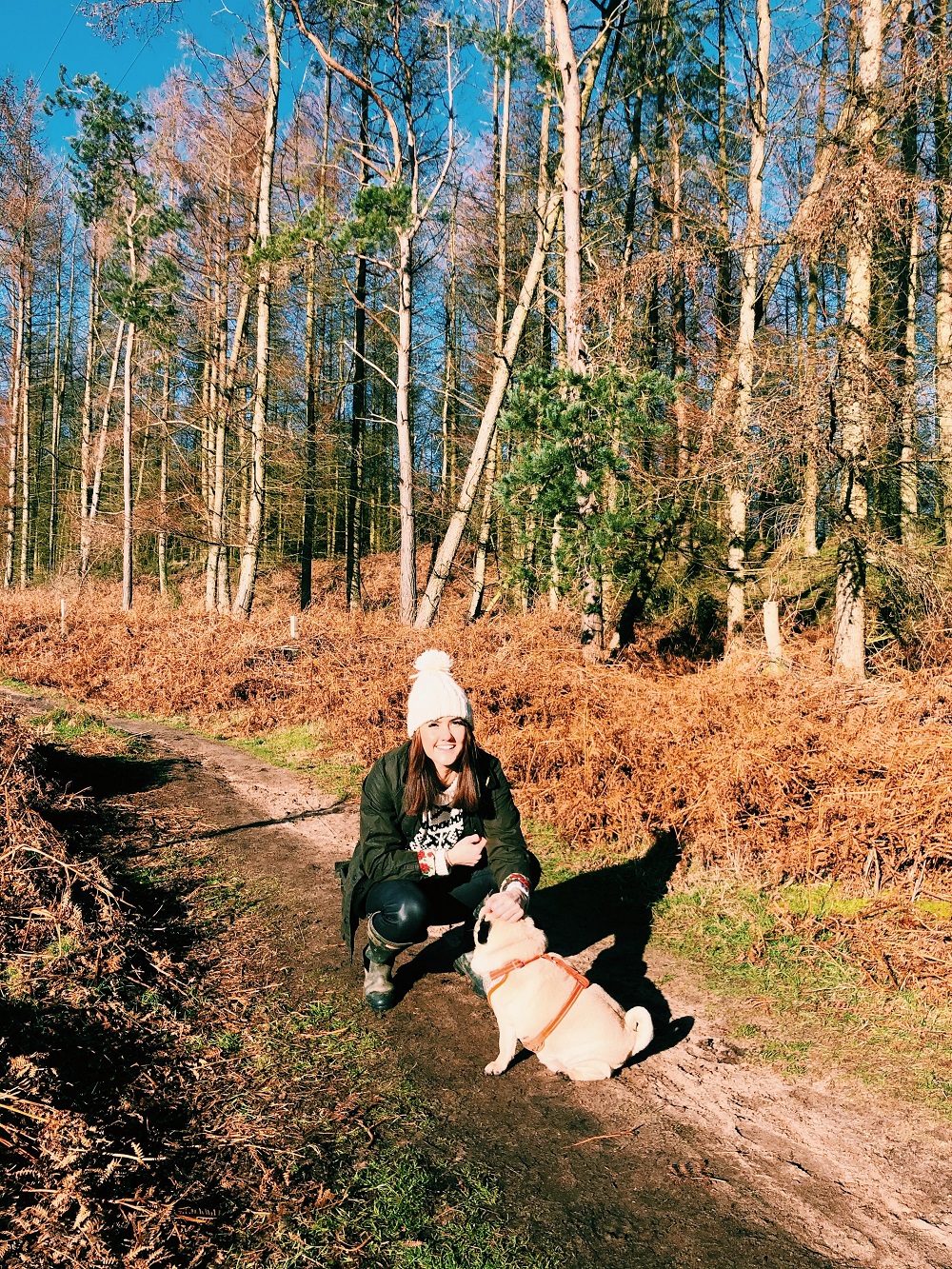 A typical evening is just chilling together at home. They are so cuddly and want to sit on my lap all the time.

It’s funny because I’ve been with my boyfriend for a year and a bit now and at first Daisy and Eva were very protective. They didn’t want him to get too close and even now every time he cuddles me in front of Daisy she's straight in the middle pawing at us as if she’s trying to get us apart. She’s so funny

How was it recording your Capital FM radio show from home with Daisy and Eva for company during the peak of the lockdown?

It was difficult, I’m not going to lie. I mean if the doorbell goes, they bark, if they hear a sound outside, they bark, so every time I was live I just kept thinking ‘please just be quiet, you’ve got 30 seconds, please don’t bark’ (laughs).

There were times where I would be sitting with Daisy’s head in between my legs with me stroking her to distract her. I always had an instant sigh of relief every time I was clear and knew the mic wasn’t on, like ‘okay, you can make a noise now’ (laughs).

I spoke about it with my producer beforehand and we said worst-case scenario, the listeners knew I was at home, we didn’t hide it, so if they’d made a noise it wouldn’t have been completely unexpected. 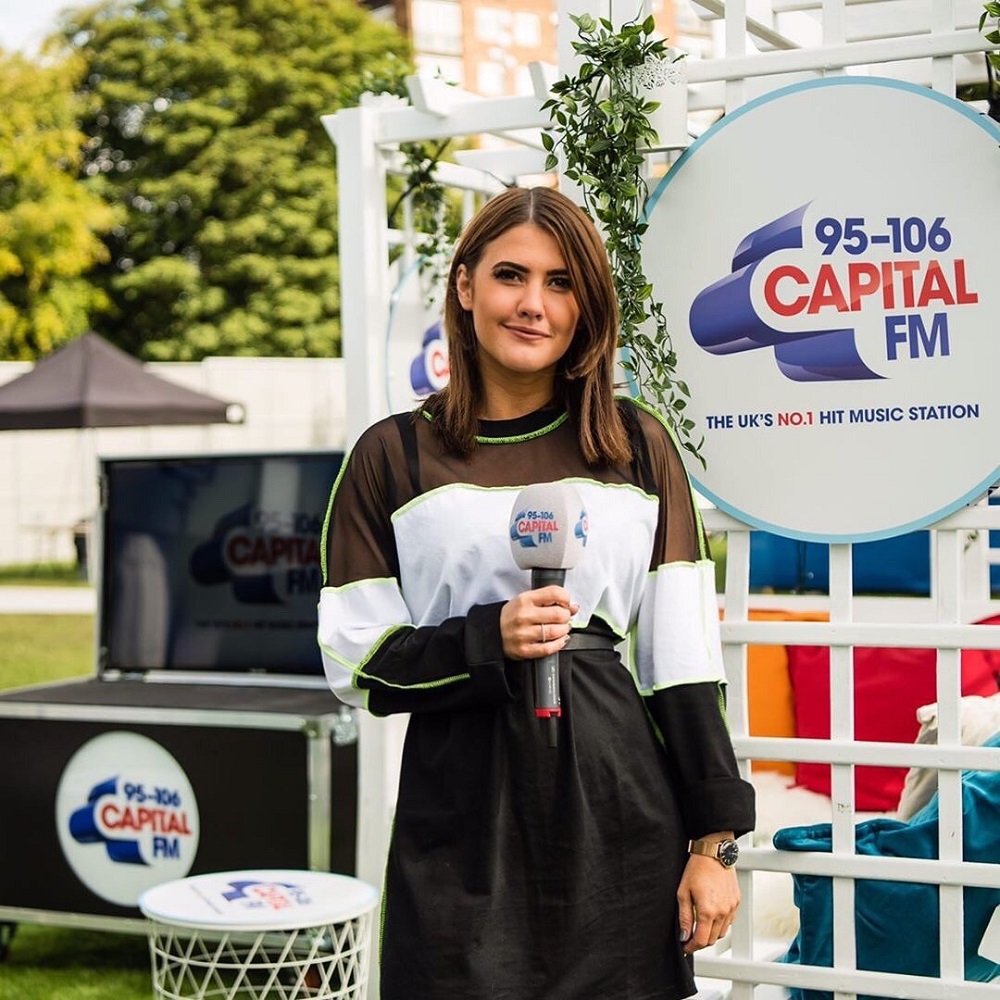 What do you think you would have gone on to do if you hadn’t built a career in radio?

Well, I would probably still be working for my dad’s company. I did that before I went to uni and when I came back.

I really didn’t know what I wanted to do, to be honest. Everything sort of just happened, and thank goodness it happened the way it did. My parents always encouraged me to do what I loved doing, so when I went to uni I did dance because that’s what I’ve always loved to do, and when I was at uni I found radio.

But yeah if I hadn’t have found that, I’d probably still be working for my dad helping him to grow the business. I can still do a very good sales pitch (laughs).

What is the biggest thing you’ve learnt about yourself since owning Daisy and Eva?

That’s a hard one. I think I’m a lot more patient now, anyone who’s had a Bulldog will know that they don’t just do things when you ask them to, they’ll do it when they want.

Endless love because no matter what they always want to be your best friend. They love you and just want to be a part of your life. Through good times and bad, they love endlessly.

Last year I lost both of my grandads within six months of each other and that was probably the hardest time I’ve gone through because I was really close to one of them. When I was bawling my eyes out, Daisy and Eva would just snuggle up to me. They wouldn’t leave my side.

Dogs are very good listeners and I think they save you because as a dog owner there are certain things you have to do, so they force you to get up and move around, even if you don’t want to. 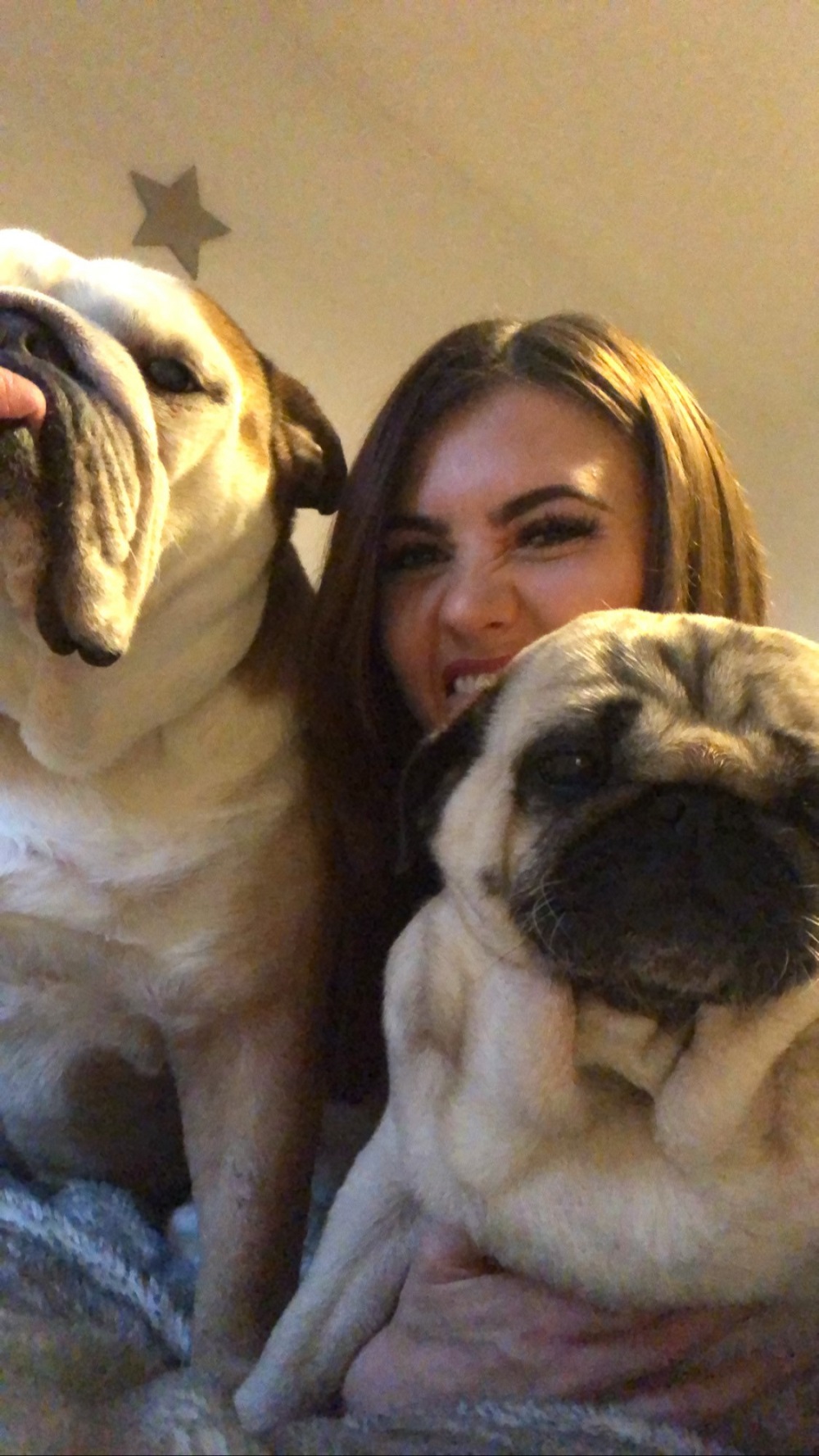 Finish the following sentence: my dogs are...the best thing ever.

And finally, if you could ask Daisy and Eva one question and one question only, which they could answer, what would you ask them and what do you think they would say?

I’d ask them if they’re happy but I think I already know the answer and that’s yes.