Sally Oultram works at Medical Detection Dogs and is currently fostering one of the dogs being trained by the charity to detect Covid-19.

Storm, one of the sniffer dogs dubbed the ‘super six’, is a three-year-old Labrador cross Golden Retriever. He joined Medical Detection Dogs from another assistance dog charity. He’s naturally curious with a lust for life and an eager to please attitude.

Alongside five other dogs, including three working Cocker Spaniels, a Labrador and a Labradoodle, Storm is currently undergoing training as the search continues for solutions to combat the virus sweeping the world. 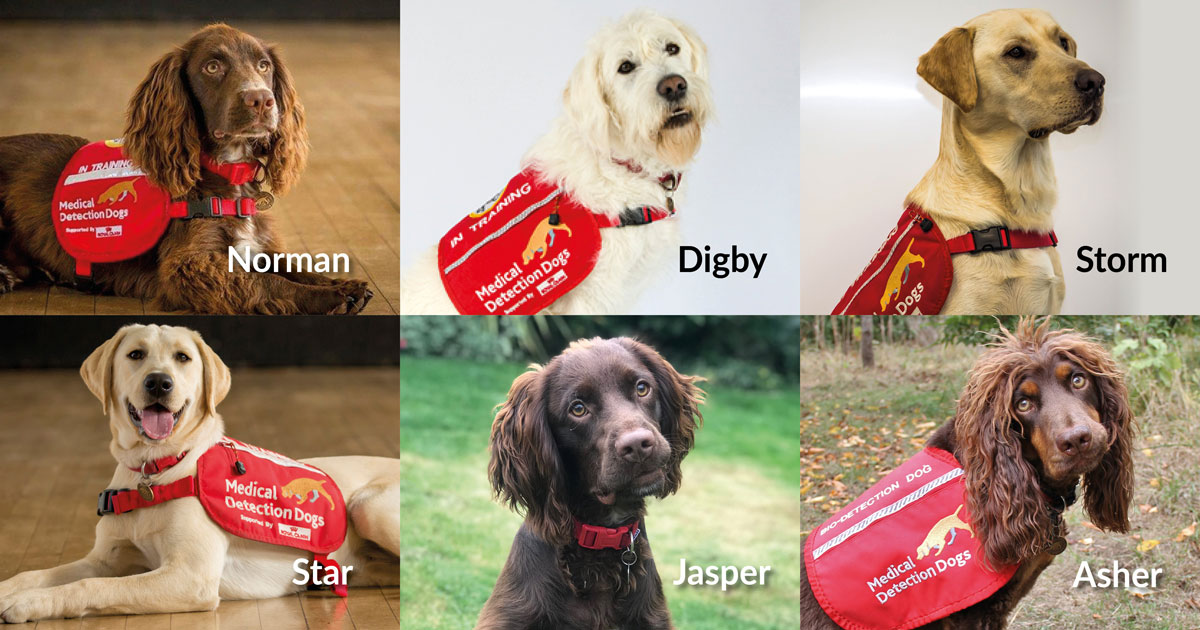 The 'super six' sniffer dogs being trained in the UK

Sally joined Medical Detection Dogs six years ago as a cleaner, encouraged by her friend to do so as a way to get her foot in the door to show the charity her skills.

The skills her friend was referring to are connected to her career in the entertainment industry. Having owned animals including horses, cows, cats, dogs and chickens since childhood, she tells us her summers were spent riding around fields, watching wildlife and spending time with her childhood best friend, Jennifer Saunders (yes, Ab Fab’s Jennifer Saunders) and her horse.

After training as a chef, a friend invited her to watch him perform with a team of horses called the Devil’s Horsemen. She fell in love with horse training and since then she and her daughter, Camilla have been involved in training horses for film and television, including ‘The Bride’ and ‘Game of Thrones’.

We went behind the scenes with Sally to find out what a typical day in Storm’s life is like and to discover more about his Covid-19 training. 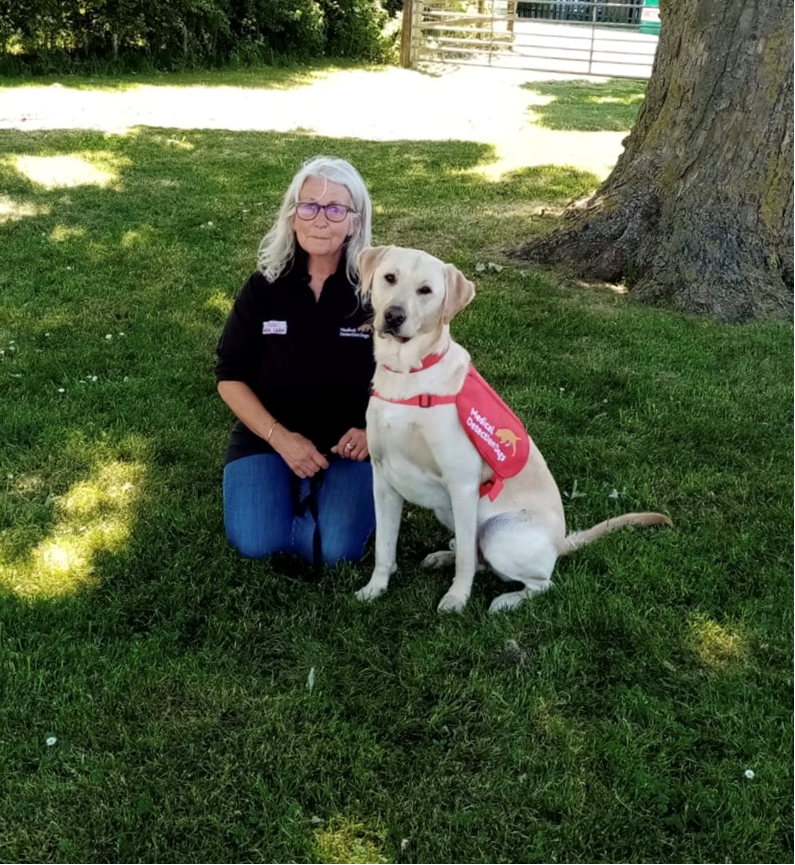 Storm joined Medical Detection Dogs from another assistance dog charity. Being naturally curious, his personality when combined with his high energy levels, makes him the perfect Bio Detection Dog, according to Sally.

“Storm thrives on work, to him it’s a game and he is so eager to please. The secret is keeping a balance of equilibrium when focusing on searching for the targets. It’s vital that I ensure Storm is well-rested and has the correct exercise on weekends. I am lucky I have full use of the family’s 200 acre Wychwood Stud, so he has a twenty acre field to free run in. His recall is exceptional and he's always checking to see where I am.”

Storm’s day starts at 6am with a visit to the garden followed by breakfast and a walk to the village to stretch his legs.

“We leave for Medical Detection Dogs at 7.30am each morning. Storm enjoys a play in the glorious memorial garden which is filled with rose bushes and lots of long grass, so important his toileting is completed before he starts his day. 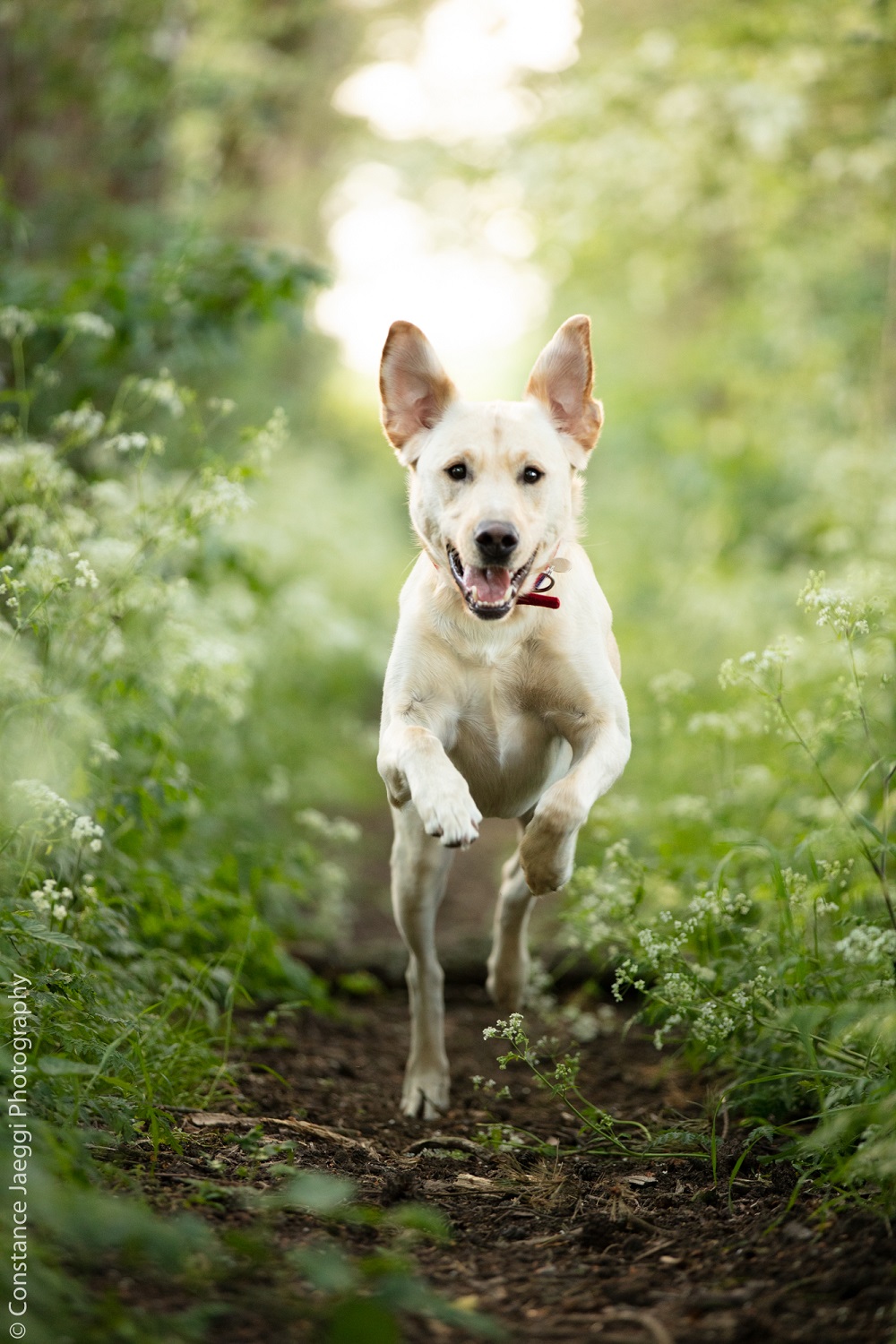 “Then, as it’s the protocol I take him in and his coat is sprayed with disinfectant and his collar is changed.” Radio 1 plays throughout the Bio Building keeping Storm and his fellow CV-19 ‘super six’ colleagues entertained.

“Storm is a very social character. I have nicknamed him "Stormzy' after the musician, both, in my mind, equally talented,” said Sally. Storm and his canine colleagues spend their days at work in an open plan area. “They all get on so well and because there are no kennels, the dogs have lots of open plan interaction with their trainers and Medical Detection Dogs staff,” she added. 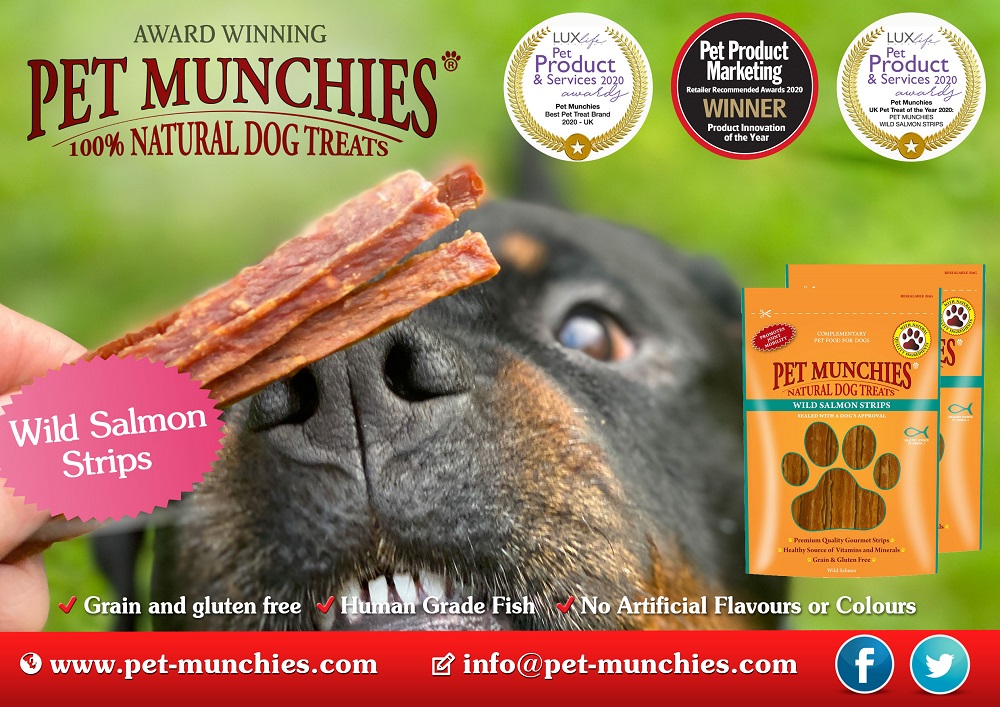 Once Sally has settled Storm into his open plan space with his colleagues, she leaves him for a day of training.

“When he’s in work, Storm is happy to see me when I’m doing my Bio Tech work, but it’s important the relationship with his trainer Mark takes priority for Storm to focus on during the day," adds Sally.

Medical Detection Dogs tell us that Storm is doing brilliantly with his initial training on the Covid-19 detection project and has spent the last few weeks getting to know the system.

He now steadily and methodically works his way along some metal arms, one of which has the training odour in that he is looking for.

When he has investigated them all, to make sure there is no doubt, he stops in front of the odour and stares at it intently. If he gets it right, which he usually does, he gets rewarded with a treat and a fuss from Mark. 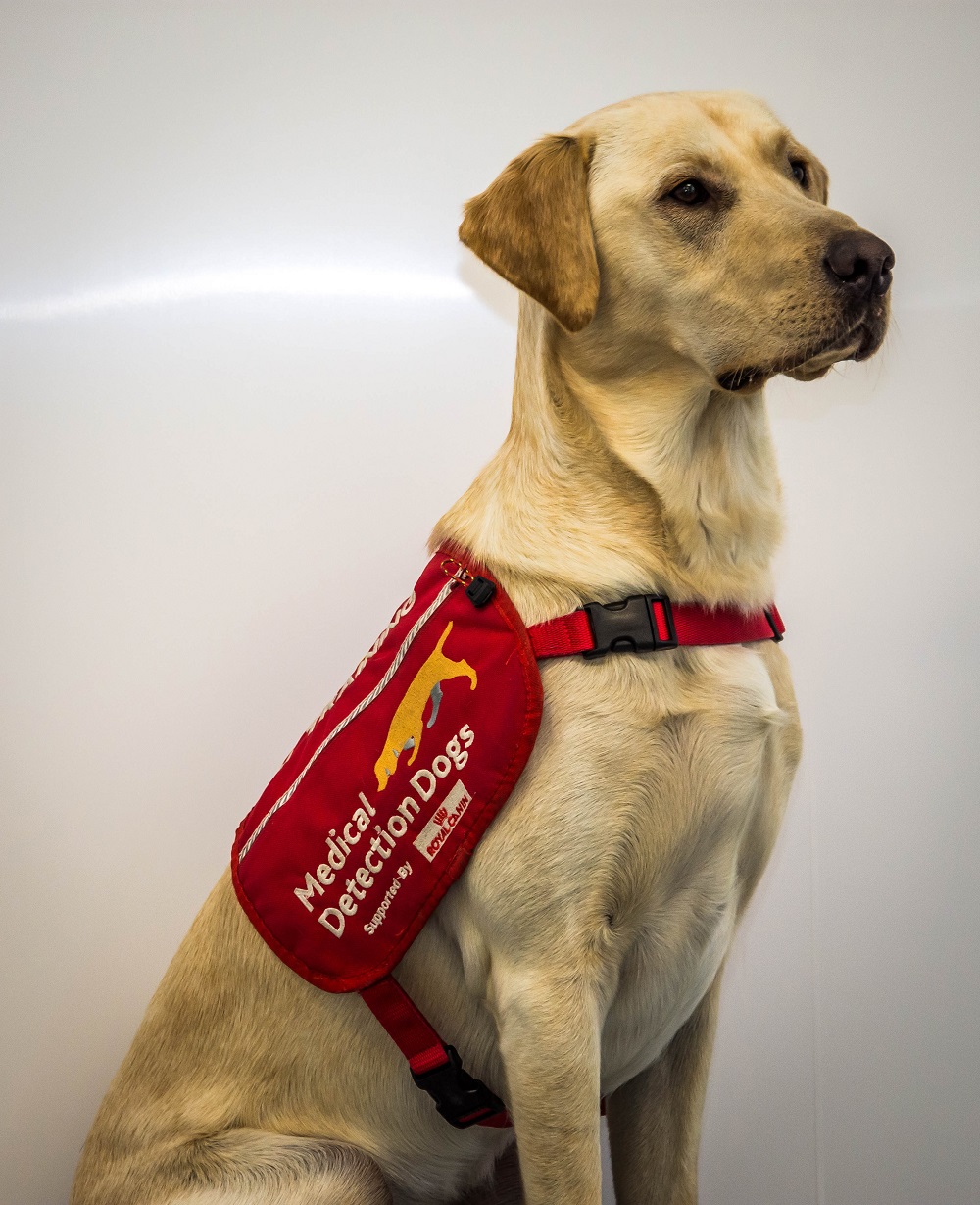 In a few days time, when the Covid-19 samples arrive on site, he will be more than ready to transfer his skills using that odour.

“I collect Storm at 5pm and he is always happy to see me. The experience is so reminiscent of collecting your child from school. Afterwards, we go straight home and he has a play in the garden before supper. Evenings are completed with a walk at the Stud in a cool tree-lined avenue. His nose is always working. He’s always checking out new walks to explore,” said Sally.

When he's not working or exploring, he loves to sofa surf according to Sally, who says he starts each night in his bed but begins each morning on hers. Something a lot of dog owners probably experience.

Sally takes her responsibilities and that of the task Storm’s undertaking - training to be one of the world’s first dogs trained to detect Covid-19 - very seriously. 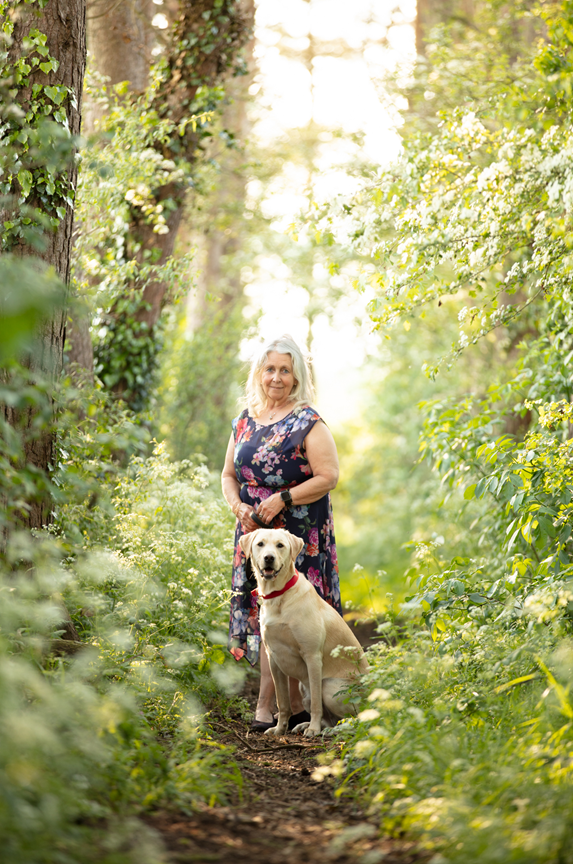 “I have had a remarkable life as an entertainer, being given the opportunity to be part of Storm’s journey, I have put my life on hold while he's with me. He deserves to have me adapt my day around his needs. Dogs like him need to relax and chill out just like us,” she said.

And as the world’s media waits to find out about the next step in the journey of Storm, Norman, Digby, Star, Jasper and Asher, Sally says you just have to shut the world out and concentrate on the job at hand.

“You have to forget about the world media following them. Storm has given me far more than I could ever give him. Last year I had to say goodbye to my Clydesdale Horse, Ted who lived with me for 21 years. I wrote children’s books about his adventures. Storm has taught me how to love again. He is part of the CV-19 ‘super six’ and they are the success of Medical Detection Dogs. We always respect the dogs first and why they love coming to work each day.”