Max Clifford is undoubtedly the UK's best known PR guru. He's developed a reputation managing some of the biggest names in the world of showbiz, finance and sport. Max is a HUGE dog lover and agreed to do our 20 questions where he gives a fascinating insight as to how he would handle the image problems suffered by some of the breeds who have received a hard time in the media over the past few decades. 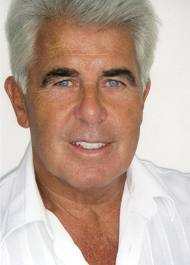 Hello Max, thanks for taking the time to answer our questions…. Before we start, are there any projects in the pipeline that we can expect to hear off in the near future?

Anything she ever did would be part of the fame game. The main purpose of her whole life is publicity.[/pullquote]

Yes there are a hundred projects that we are in the middle of. Obviously we do PR for an awful lot of organisations and individuals worldwide, so there are projects all the time. We are busy day-to-day doing the PR for various people.

1) Tell us about your pets. Names, breeds and ages.

I have two Cocker Spaniels. Oliver who is nine and Monty who is just a year old. Monty is a Golden Rhone and Oliver is black and white. They are both an important part of the family. We live in a park in Weybridge in Surrey, where there is a golf course and a lake, so there is plenty of exercise for them, and for me and for anybody else that takes them. It is the perfect place for dogs.

2) When did your interest in pets/animals begin and how long have you been a pet owner?

I’ve been an animal lover since I was a small child. My parents always had cats, but not long after I got married, my wife and I got our first dog which was a Labrador called Brandy.

3) When did your interest in PR begin and how did you go about getting to the top of the tree?

It was never a plan actually. It just happened to me, I was a local journalist working where I lived in Wimbledon. I started a record column and that lead to my being offered a job at EMI records in the press office. I joined in 1962 when I was nineteen and I was given an unknown band to promote who turned out to be the Beatles. It kind of happened to me and for me. We also launched the careers of Adam Faith, Cliff Richard, The Beach Boys, Stevie Wonder, The Four Tops, The Temptations, The Jackson 5, many of whom became clients when the chief press officer left to form his own PR company and took me with him.

That was in the late sixties, when we helped to launch people like Tom Jones, The BeeGees and Cream. It was a case of being in the right place at the right time at the very beginning of the PR business in this country and having a big name client to start with.

4) Being the animal lover that you are, have there ever been any times in your life when you have wanted a period of independence, with no animal responsibilities?

No, the only time it causes me any kind of problem is when we go on holiday, because we go to Spain and we tend to go backward and forwards quite a lot. We put the dogs in kennels, the kennels where we got them from in the beginning, so it is like going home for them and they love it. It is a place called Avonmore kennels in Ripley, out in the country. Oliver has been going there four times a year ever since we got him and he is very happy and very well looked after there.

So if there were more pet friendly airlines to use do you think you would take the dogs away with you?

No I don’t think so. Where we live is the perfect setting for dogs and I honestly think they are happier back here than they would be in Spain. I can tell this from their attitudes when they arrive at the Kennel.

5) What is the proudest moment of your professional career?

Playing a small part in bringing down a very corrupt Tory party and John Major about six or seven years ago.

6) Whatever happened to child singing prodigy, Declan Galbraith, who you were representing when you met Louis Theroux?

I ceased representing him and he has disappeared.

7) If you could be an animal or breed, what would it be and why?

I would be a Labrador, because the Labrador I had was strong and independent and he had a wonderful lifestyle. I would love to be him in that circumstance.

8) Describe your average day at home (or work) with your pet?

Breakfast at nine, half an hour walk around the park. And then, when I am at home which is probably two or three evenings a week they will be with us, or on us, that is myself and my daughter Louise. Then maybe a walk if it is the summer.

So would you say your dogs enjoy a fairly traditional lifestyle?

Yes, but they get a lot of exercise as we have housekeepers. They are luckier than most dogs in terms of exercise and company.

Louis Theroux-
You tell me. What dog is cunning?
A greyhound? Mick The Miller was cunning.
Yes, Louis was cunning but not clever.
Maybe a Whippet then.
No, they’re athletic. Louis was not athletic; I’ve played tennis with him. This is difficult!

Simon Cowell-
Simon is quite aggressive and in your face. What dog is like that, would that be a Staffy? No, a Rottweiler, actually no he’s not that tough, he’s a Staffy.

Piers Morgan-
He’s a bit of a primadonna, quite fun, but quite aggressive. Maybe a Poodle. This is difficult for me. Louis isn’t a Greyhound really now I think of it, what’s that dog with all the hair that bounds around the place.
An Afghan Hound?
Yeah, put him down as one of them

Edwina Currie-
She’s a Terrier of some sort.

11) What is the best thing about being a pet owner over not being one?

Affection, companionship, they give a lot. That’s why I love Cockers. They’re wonderful dogs.

12) Time to be controversial. If an establishment, say a hotel, had a blanket ban on pets do you?

I would accept the decision. Not a problem for me. If that is their policy.

13) Describe the last time you…

Had to shout at your pet – Everyday. They run off and chase foxes.

Had to go to the vet – About three months ago when Oliver had a bad leg.

Didn’t get the job you wanted – Never happened.

Thought about getting another animal (besides what you have already) – Never really.

Trained your pet to do something new – (laughs)I have never successfully trained a pet to do anything.

14) Cocker Spaniels are considered feisty, independent and larger than life characters. Does your choice of breed reflect your own personality?

To an extent. I would describe them as affectionate, which applies to me too.

15) In your opinion, do you suspect that some celebrities become dog owners in order to generate good PR?

Undoubtedly, all they care about is themselves. They are not capable of really caring about anybody, never mind a dog.

What is your opinion on Victoria Beckham recently getting a Shar-Pei, even though she has had dogs in the past and got rid of them?

Victoria Beckham is addicted to fame. Anything she ever did would be part of the fame game. The main purpose of her whole life is publicity

I tend to bury it. So zero is my grade. I do make sure it is covered up though.

17) Some breeds are famous for having a bad public image. Two of these include the English Bull Terrier as a result of Princess Anne’s overly boisterous pet Dottie, and the Greyhound, which is seen by many to be a high maintenance athlete rather than an exceptionally good pet. The public’s perception of these breeds does not reflect the reality. As Britain’s foremost PR expert what would be your approach to convincing the public that both make excellent pets?

I would ensure that there would be stories in the media of these breeds doing great things, like rescuing children. I would get the message across too.

18) Do you have any clients that are overly extravagant with their pets?

Not that I am aware of. I would imagine one or two might be, but I don’t know.

19) If your dog(s) had the ability to answer one question and one question only, what would you ask them and what do you think that they would say?

The only time I would ever want to know, would be when they were not well. That would be wonderful for them to be able to tell me what is wrong. But apart from that, I don’t mind not knowing what they are thinking.

20) What are your opinions on having a more pet friendly approach to dogs in the work place?

If it was suitable then in principal I think it is fine. Personally, it would not be suitable for me as my offices are in the middle of Mayfair. People are coming in and out all the time, I would be worried that Monty or Oliver would run off into London never to be seen again. But if you have an office with one or two people and you work in the country, then it would be fine I suppose.