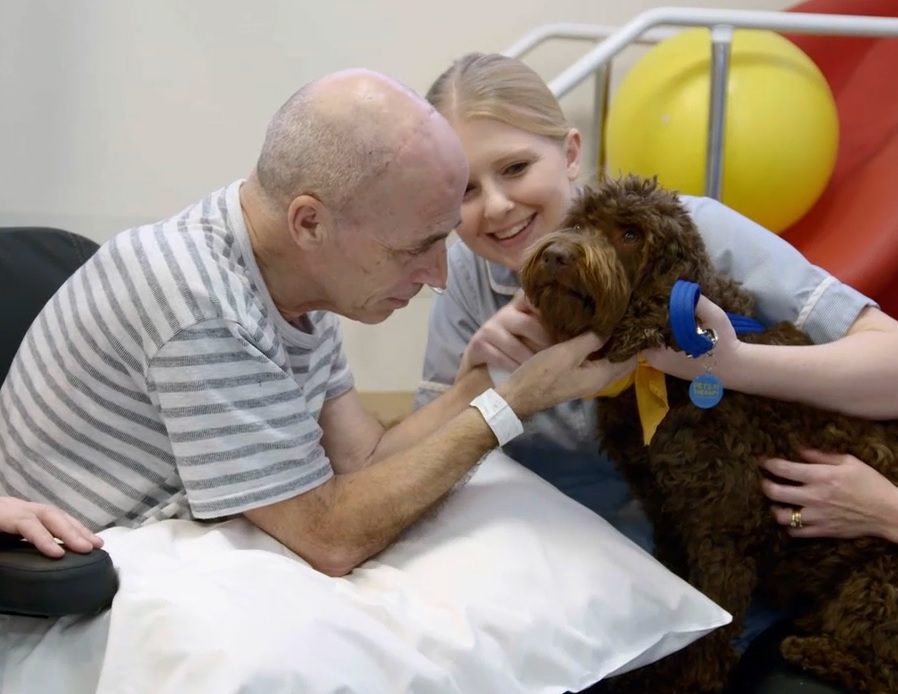 TV presenter Angellica Bell was brought to tears on Channel 5’s The Dog Rescuers when she met a puppy farm survivor named Rolo.

Now a therapy dog, Rolo was joined by the TV presenter on one of his weekly rounds at Southend University Hospital, in Essex where she found out about the huge impact he has on the recoveries of adults and children in the wards.

Four-year-old springer spaniel cross poodle Rolo was one of 30 dogs and puppies rescued by the RSPCA in December 2013 from a puppy farm in South Ockenden.

He was extremely weak and poorly when he was taken in by the charity’s Essex South, Southend & District branch for round-the-clock veterinary care and rehabilitation.

More than four years later and Rolo has come on leaps and bounds from the sick, weak, frightened pup he once was. After getting his second chance at life, the happy little dog has spent the last three years giving something back via Pets As Therapy.

His owner Claire Dean said, “Rolo is such a happy, friendly, loving dog that we knew he’d be an incredible asset to the Pets As Therapy team - and he’s proved a huge hit everywhere we work together.

“We visit Southend University Hospital every week to help patients on the road to recovery and bring them some comfort at, often, very difficult times.

“Rolo and I are also the first and only partnership allowed into the children’s ward which is incredibly humbling."

Clair continued, “We’ll visit specific patients who ask to see us and he brings joy to the patients as well as family members, visitors and the staff. It’s amazing to be there with him and see how much happiness he can bring to people, some of whom are facing life’s biggest challenges.”

Joined by The Dog Rescuers team earlier this year, Rolo, Claire and Angellica went to spend some time with Alan Brackett and his son, Richard.

Six weeks earlier, the pair were at a Chelsea football match at Stamford Bridge, in London, when dad Alan became unsteady on his feet and weak on the left-hand side of his body.

“We rushed to Charing Cross Hospital to discover he’d had a major bleed on the right side of his head,” Richard tells Angellica. “Rolo brings him a bit of normality [to hospital]. He loves dogs, he’s got a dog at home.

“My dad is loving [the therapy with Rolo], and the dog’s loving it too.”

Alan spends time stroking Rolo, giving him treats and speaking to him and Claire. Richard said the time with Rolo has been “invaluable” for his dad’s recovery which has seen him begin to regain the use of his feet.

Angellica said, “Seeing Rolo and Claire at work whilst being at the hospital was incredible - I was amazed at how much impact therapy dogs can actually have.

“I met some wonderful people on the ward including Alan and I was touched to hear his story and see the joy in his eyes when he saw Rolo. It was truly an emotional day.”

As well as his amazing work at the hospital, Rolo has also taken part in the Read2Dogs scheme at a local primary school and visits residents at a nearby care home.

On the impact Rolo is having on the patients he meets, Claire concluded, “I’m incredibly proud of Rolo and how far he’s come, from the puppy farm rescue who was near death’s door to the impeccably behaved, well-adjusted dog he is today. He really is making a difference to people’s lives and he’s loving every second of it - it’s just fantastic to see.

“I hope it goes to show how wonderful rescue dogs can be and, if given the right home and encouragement in life, how they can go on to achieve the most amazing things and help people at the same time.”

In This Issue... Talking Point: This Unusual Animal Friendship Will Melt Your Heart Lifestyle: Ashley James Tells Us Why Her Dog Is Her Best...

Ashley James is a TV presenter and DJ who rose to fame on E4’s hit reality show, ‘Made In Chelsea’. After appearing on this...

Every month, we set out to find new pet products to share. This month, guided by our very own review dogs Mia, Chris and...