You are playing fetch with your two-year-old Chihuahua when all of a sudden, he cries in pain and you notice that he starts to limp with his lower back leg.

He skips on the other three legs for about two to five strides and then starts to run normally again as if nothing happened. This incident has occurred two to three more times in the last couple of months but is becoming more frequent.

Should You Take Your Dog To The Vet?

The answer is yes. Your dog may be suffering from the luxated patella.
Luxated patella, also referred to as "luxating patella", “trick knee” or “slipped kneecap”, is a hereditary condition in which the kneecap (patella) regularly dislocates or moves out of position (luxates), especially towards the inside.
The condition often occurs in both legs, but usually to a different extent.

The patella is found in the centre of the knee joint. In a normal knee, the kneecap rests in a rather deep groove where it slides up and down in a usual, controlled manner.

But when the groove is too shallow or out of shape, the patella pops out of the groove and shifts to the sides, usually toward the inside of the patella.

This result makes the leg lock up while the foot is held off the ground, causing your dog to yelp in pain and limp.

Luxated patella mostly occurs in the smaller breeds of dogs, although it can affect medium and larger sized breeds. When it strikes, this condition causes lameness and pain for your dog.

In minor cases, the patella slides out of the groove and then slides back without any enduring discomfort or lameness.
Your dog will yelp in pain, hold his leg up for a few seconds, then feel fine again when the knee moves back into place.
In other cases, the patella pops out for longer periods or more frequently, causing damage to the knee capsule. The pain lasts longer and the dog usually appears bow-legged.
Luxated patella is a congenital disorder, meaning that the condition is present at birth. But the presence of this problem does not make your dog disabled.
He can still live a normal and happy life, with the ability to do all of the activities he loves to do, and for the rest of his life.
Keep in mind, however, that without any treatment or if treated improperly, having a slipped kneecap causes the knee to become susceptible to worse injuries, such as a torn ligament.

As your dog ages, a slipped kneecap can also lead to diseases of joints and bones, which can result in arthritis. 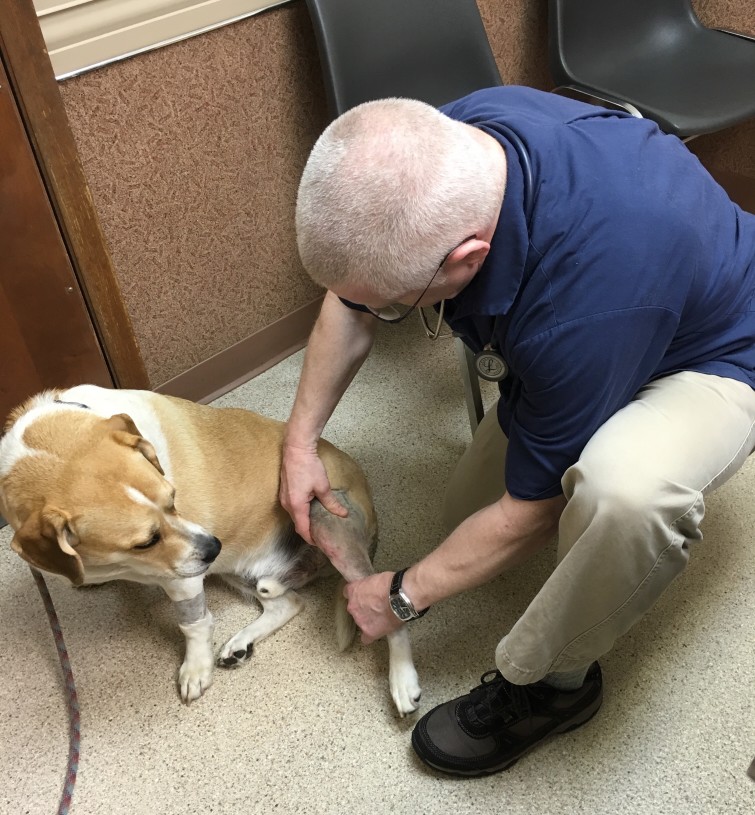 Is Your Dog Suffering From Luxated Patella?

If you think that your dog is suffering from a luxated patella or a slipped kneecap, the best thing to do is take him to the vet as soon as you can.

Although a slipped kneecap may not seem like a serious condition to your young dog, it is a progressive disorder and can be debilitating if left untreated.
Five Common Symptoms Of A Slipped Kneecap

Symptoms usually start to appear when the dog is young, between the ages of six months to one year.

But in some dogs, symptoms show up as early as around eight weeks of age, but remain undetected until the dog reaches maturity.

* Difficulty climbing stairs.
* Occasional skipping or limping, especially during a run.
* Lameness on the leg, especially on the rear, that occurs frequently and ends suddenly.
* Difficulty squatting.
* Suddenly yapping in pain while walking or running, usually lasting for two to four strides. 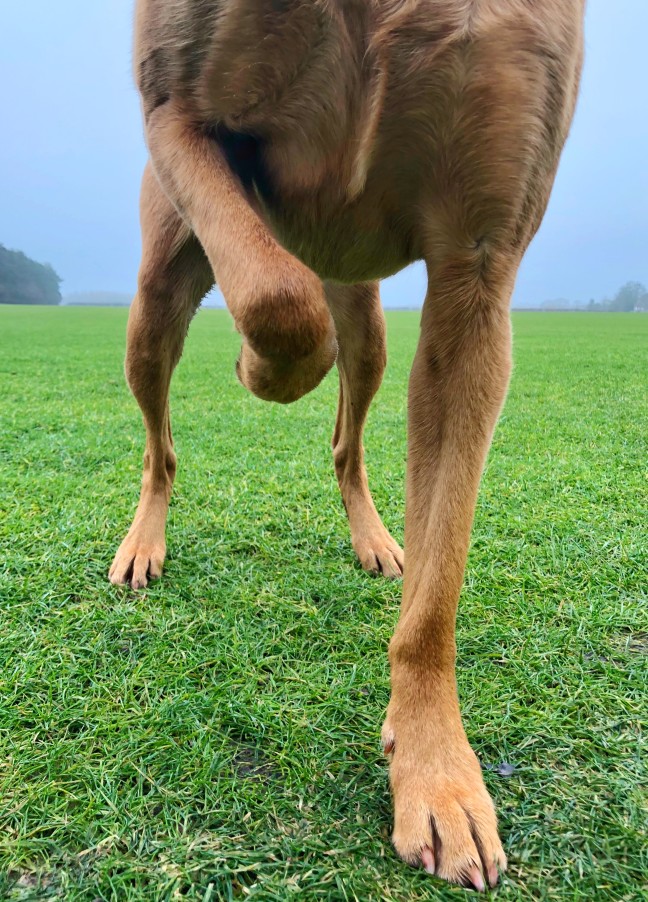 In severe cases, the kneecap dislocates more often and lasts longer. Your dog will show discomfort and pain, seems bow-legged, and exhibit a crouching way of walking.

Luxated patella is categorised into four grades, depending on the severity of the condition:

Grade I: This is when the kneecap manually dislocates but goes back into place once the pressure is released. Considered a mild case with treatment not necessary.

However, you need to keep a close eye on your dog in case the condition gets worse.

Grade II: The kneecap dislocates more often, either manually or automatically, when the joint is being flexed and continues to be dislocated until the joint is extended and the leg is turned into the opposite direction of the dislocation.

Considered as the middle ground between mild and severe, dogs with grades I and II should be closely monitored in case the condition gets worse.
Grade III: The kneecap dislocates on a regular basis, whenever the joint is flexed and extended. Dislocation is manually decreased when the joint is extended.
This is considered to be severe enough to warrant surgery.
Grade IV: The kneecap is permanently dislocated and cannot manually be put back into place. This is because the groove is too shallow or, in some cases, completely missing.
Surgery is needed to fix this problem.

Caring For Your Dog During And After Treatment

Although luxated patella is not a condition that needs to be treated in the emergency room, getting your dog tested for this disorder prevents it from becoming worse.

All dogs should be tested because a slipped kneecap can affect dogs of all breeds and sizes. However, if you own a small or a toy dog breed, you should have him tested for luxated patella as soon as possible.

Responsible breeders should know that this condition is hereditary, and therefore, have their puppies tested at around six weeks of age, preferably before sending them to their new homes.

Treatment Options For A Slipped Kneecap

Physical tests, along with the length of time that the dog is showing symptoms such as limping, skipping, and carrying his leg, will determine his diagnosis.

To indicate the severity of the condition, an X-ray of the thigh bone and the knee will be performed. 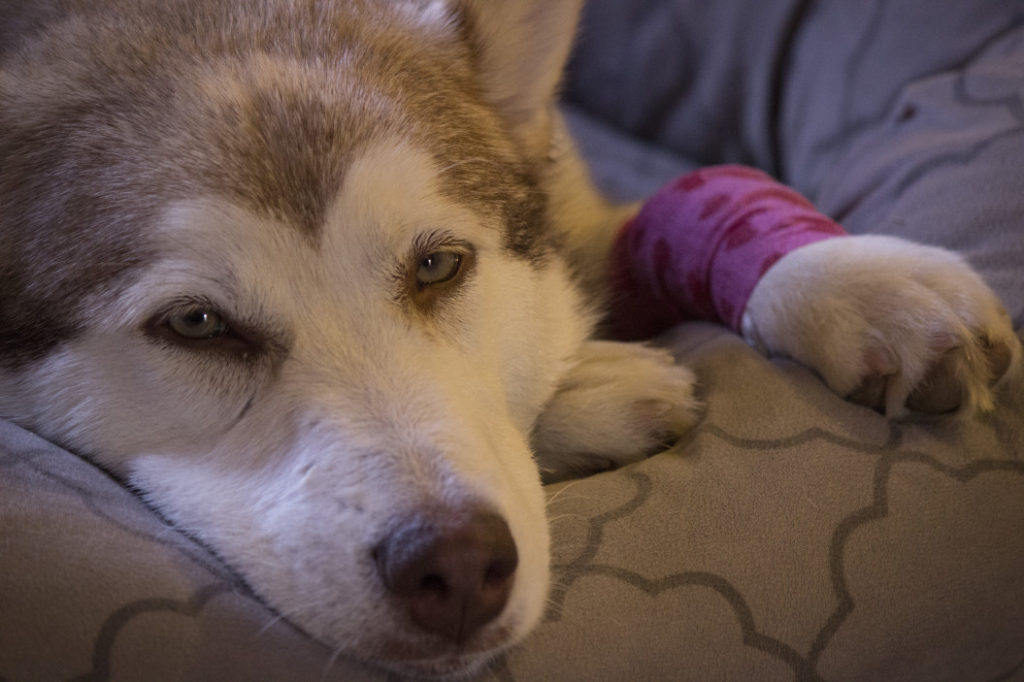 Treatment is not required for Grade I, although you should check your dog in case the problem gets worse. For Grades II, III, and IV, surgery can be performed in order to repair the malformation.

Surgery is done by an orthopaedic surgeon and includes correcting the dog's bone alignment, tightening his joint capsule, and potentially deepening the groove where the kneecap rides.

Although not a dire emergency, it is best to consult your vet as soon as possible if your dog is showing any symptoms.

If surgery is needed, your vet will refer you to an orthopaedic specialist who will perform the operation.

If your dog has a condition of Grade II, Grade III, or Grade IV, it is better to give him the surgery now before the condition worsens.

Further damage to the bone and joint may make the outcome of the surgery less successful.

Caring For Your Dog After The Surgery

After surgery, your vet will prescribe medications for your dog's pain as well as anti-inflammatories to be taken for an average of one week.

Your dog will need plenty of rest during this time, meaning very little activity for at least one or two weeks. He should be kept on the lead when outside the house.

Keep him in a small and comfortable room to avoid him jumping, running around, or doing other types of activities that can put pressure on his knee. 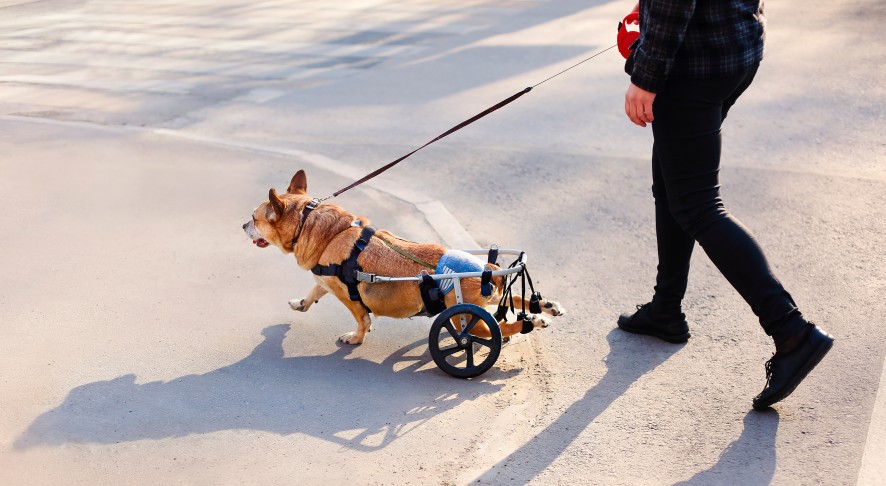 Physical therapy will begin around one week after the surgery. Take him for a slow walk for about five minutes.