A firm believer that we need to stand up for the rights of animals and an adoption advocate saying "they all deserve a loving forever family", an ethos born from losing her own mother at a young age, we unashamedly admit to having a girl crush on the DJ who holds nothing back when it comes to being the voice of animals when they have none.

During a rare afternoon off, Kim O’Meara caught up with the KISS Presenter to find out more about her two dogs, Henry and Smudge. 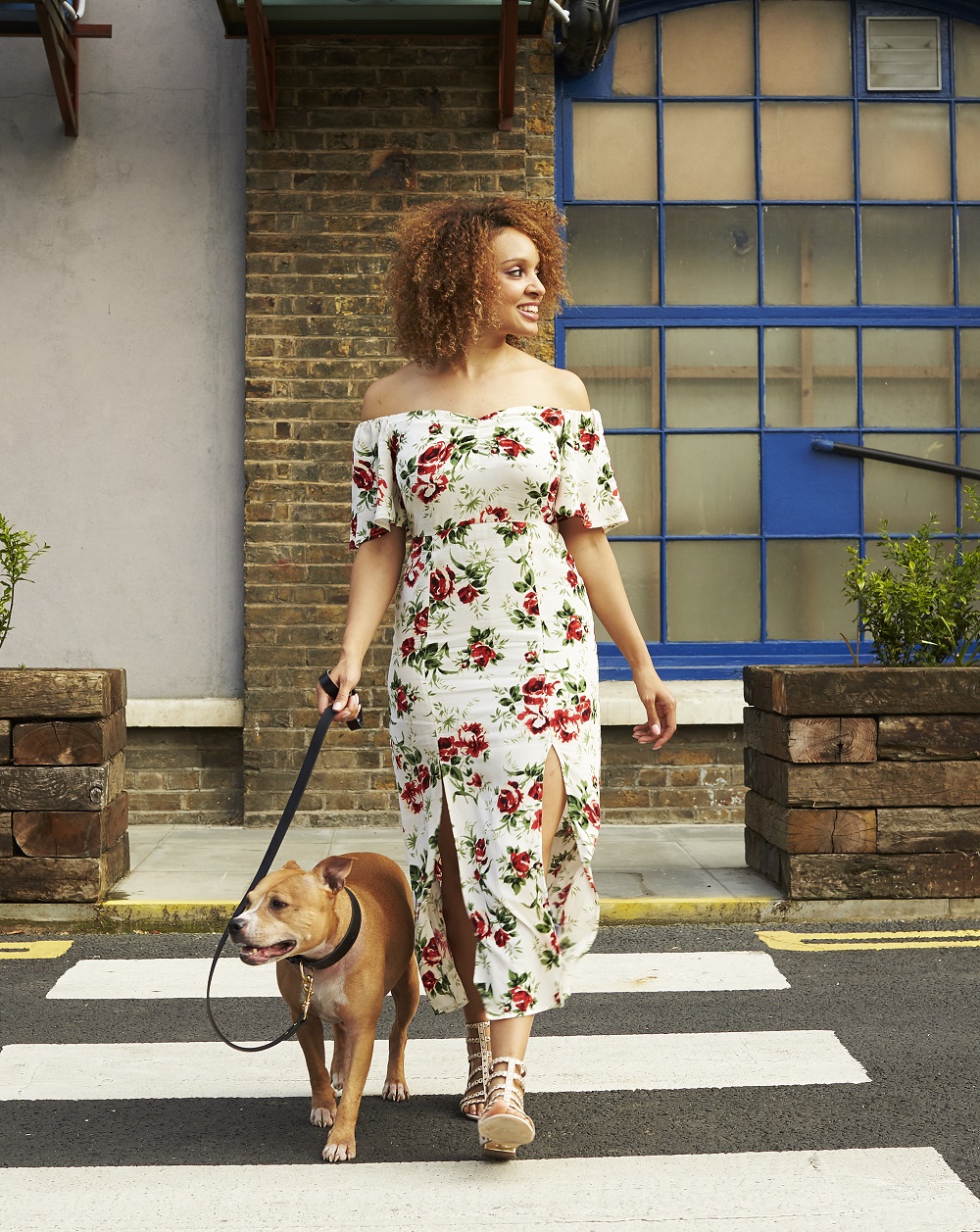 Hi Pandora! Thanks so much for your time. We know you're a massive dog lover, please tell us about your dogs.

Let’s start with Henry, who we’re meeting today. You adopted him, right?

Hi and yes! I adopted Henry from Battersea Dogs Home. It took me about a year and a half to get over the death of my first dog who was a Cairn Terrier called Growler. I went there a few times to see the rescue dogs and it broke my heart every time as I wanted to take all the dogs home with me.

I had no particular breed in mind, but when I met Henry I knew he was the one. It was the way he looked at me, his eyes called out to me. 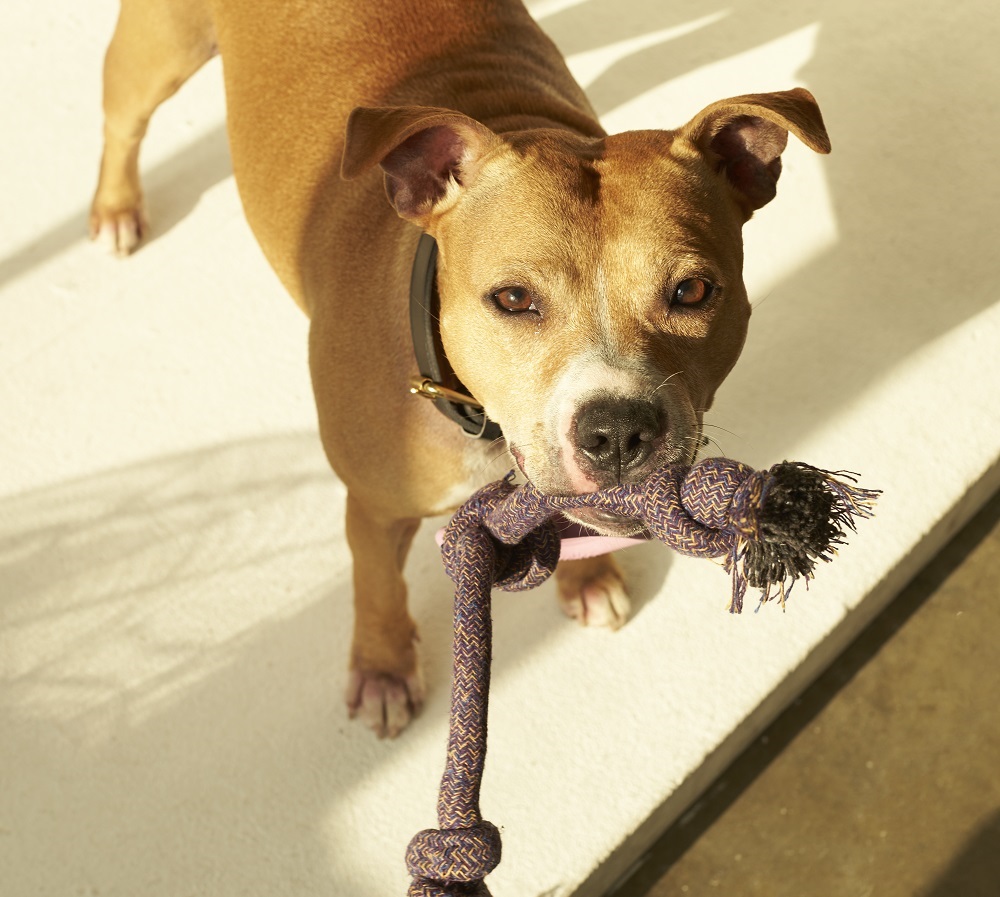 If I'm honest with you, when I first got Henry I could not control him.

He was a bit hyperactive, chewing skirting boards and going to the toilet in the flat. He was a bit challenging at first but that was because he'd been brought back to Battersea Dogs Home a few times and he hadn't known stability and real love. 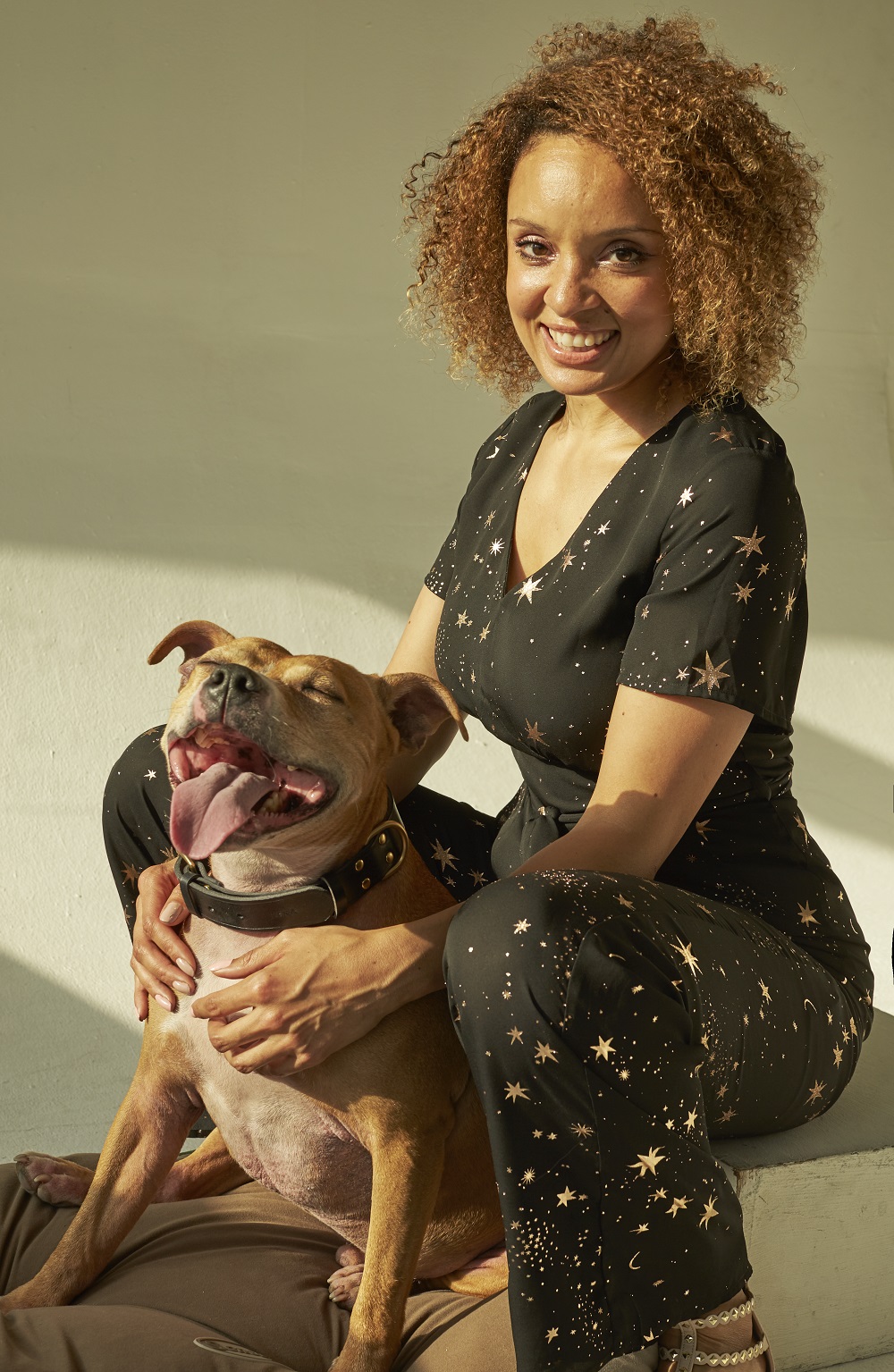 Ah, I see. How did you turn it around?

One of the trainers came and spent time with me helping me work with Henry's traits, teaching me all about what a Staffy is like and how to handle their territorial nature. 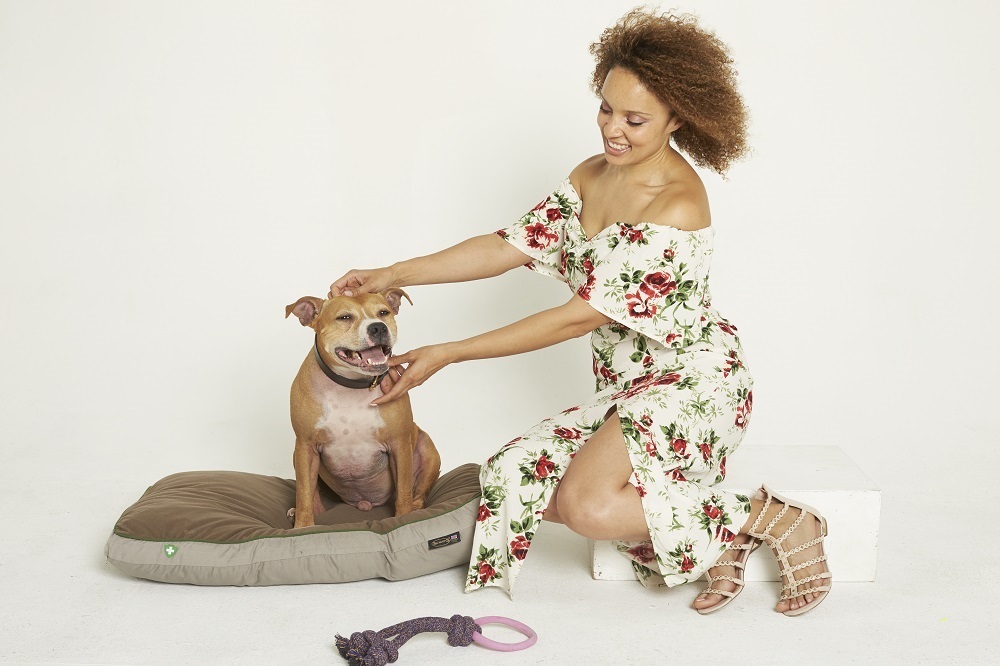 We’re big adoption fans so hats off to you for adopting and spreading the word about dogs in rescues through your blog. We run dogsblog.com so we wholeheartedly applaud you. What made you decide to adopt?

Well, when I lost my mother at a very young age, the one thing I wanted was to belong to a loving family and that's why I think everyone should adopt a dog as they all deserve a loving forever family. 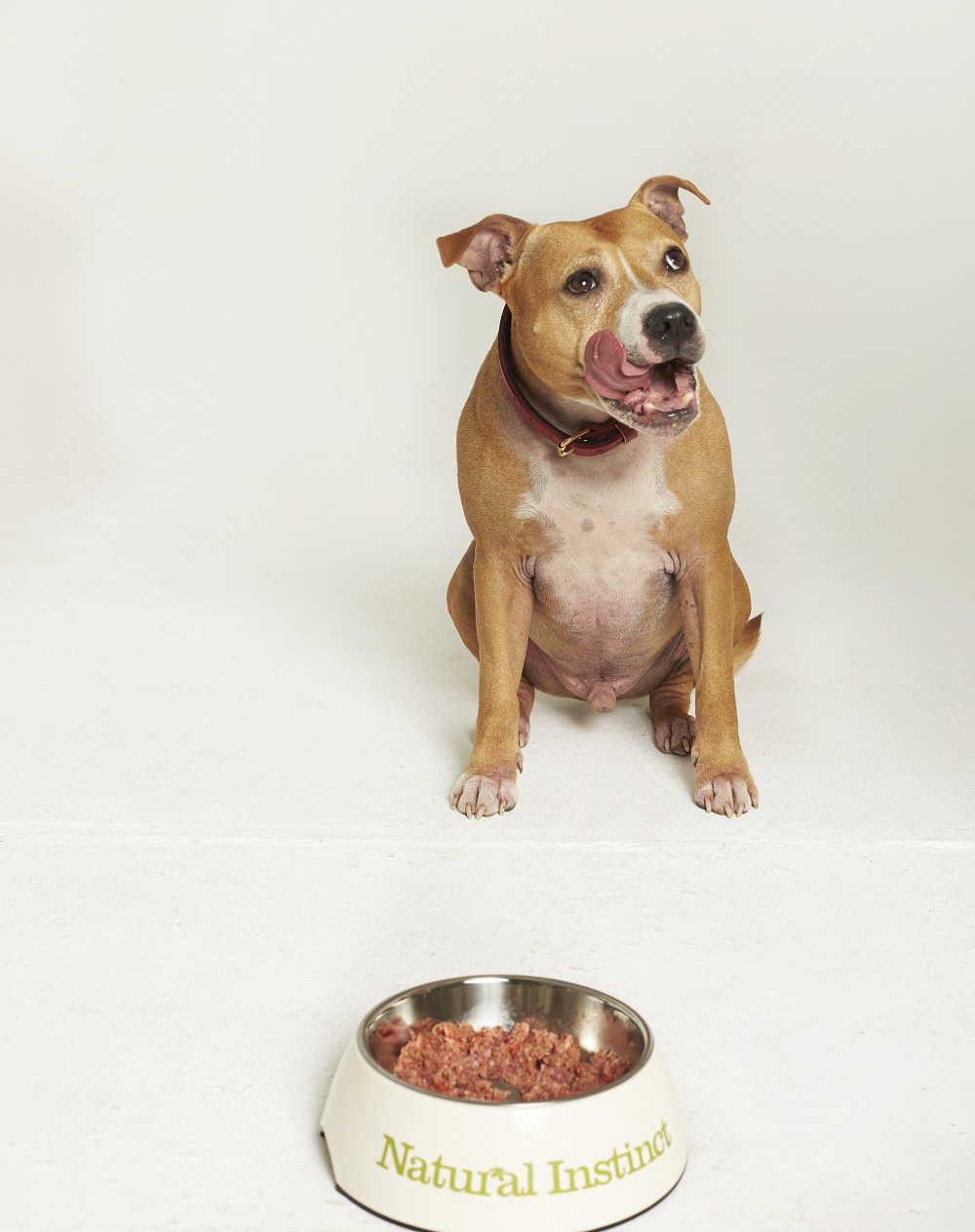 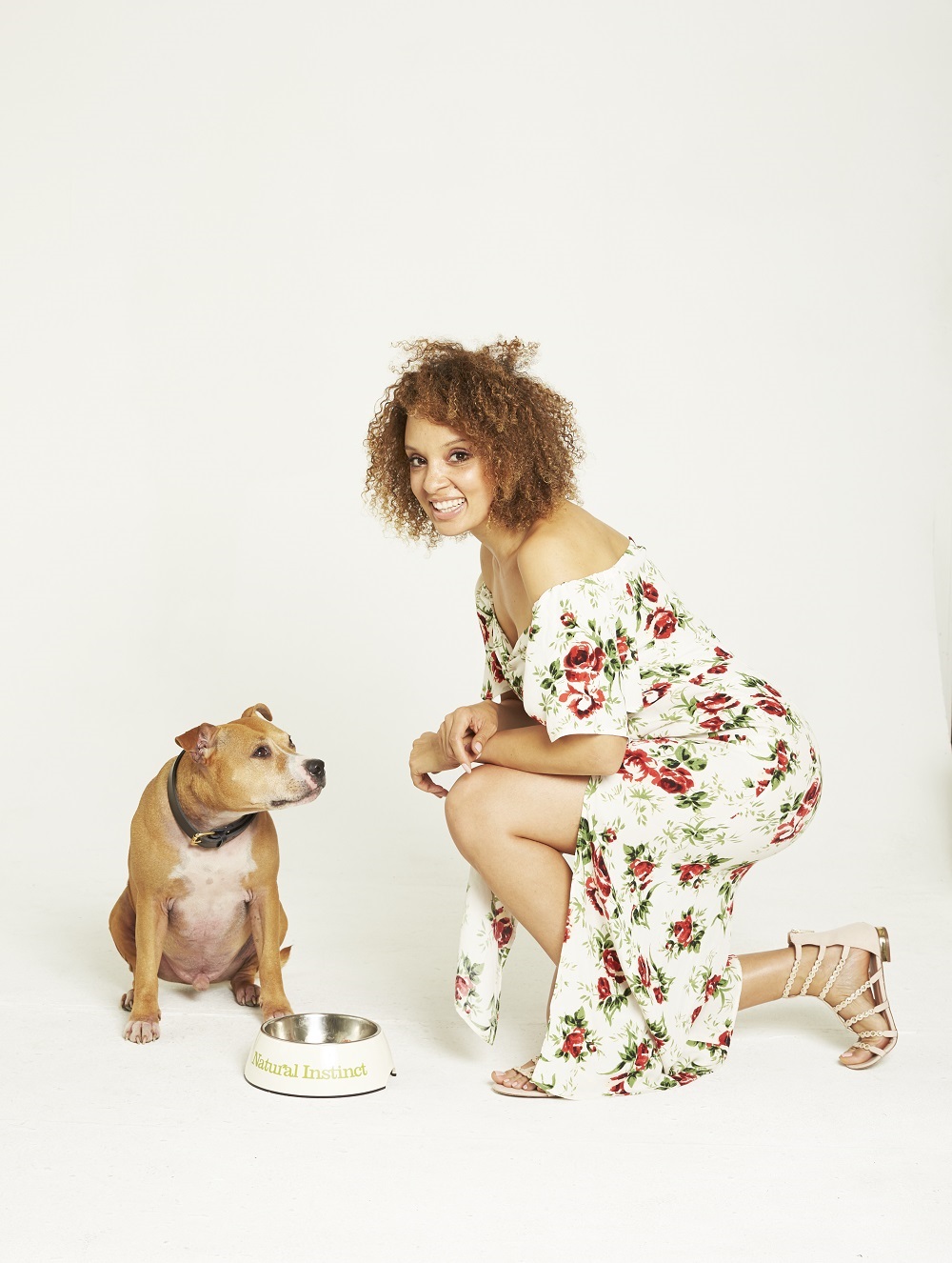 That’s a lovely way to look at a situation handed to you turning it into how it can help others. You also do a lot to stand up for animal rights, can you tell us a bit about this and what got you involved?

I've been to a few protests in Trafalgar Square because I'm against the dog meat trade and I've been outside certain shops that sell real fur.

I also make it very clear I do not agree with how slack the law is on animal abuse. The laws need to change not tomorrow, NOW. 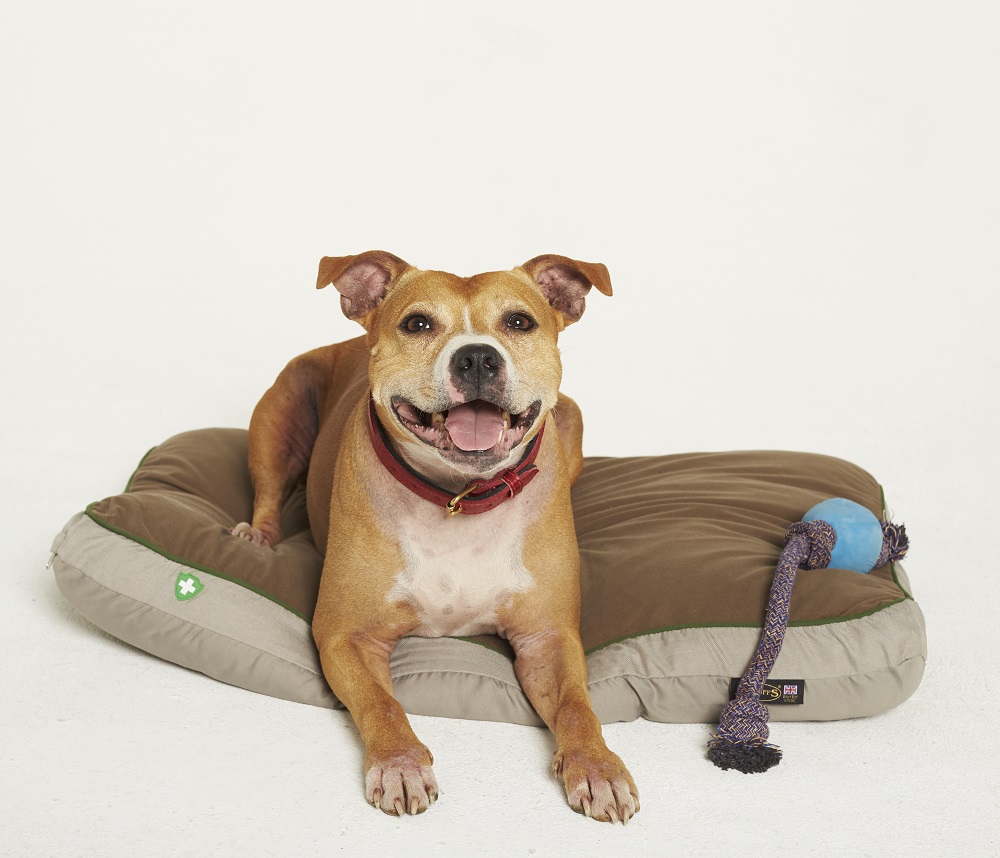 I completely agree with you. Again. This is going to get boring soon isn’t it (laughs). 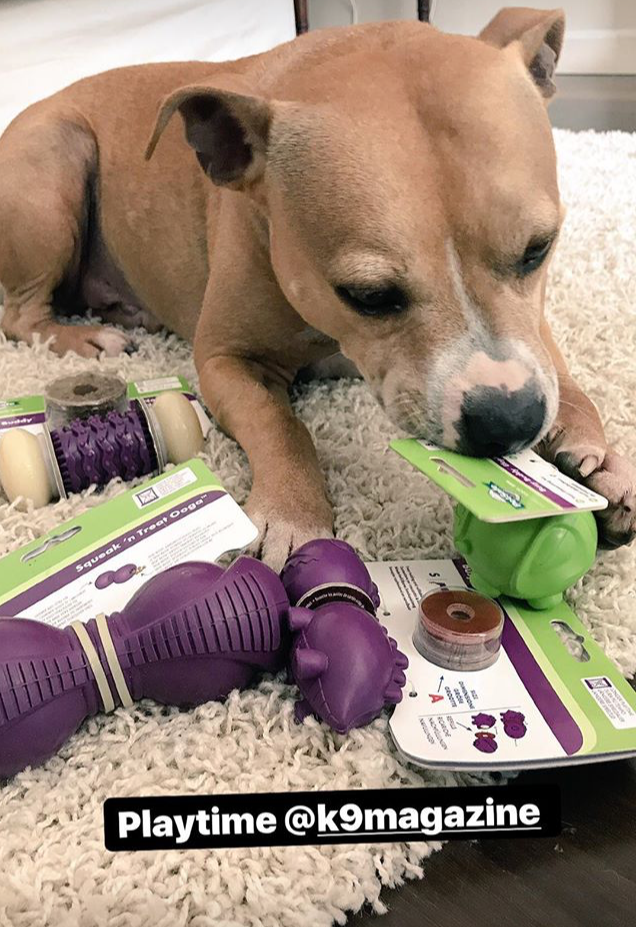 Ok so back to your dogs. After Henry came Smudge we’re guessing. Tell us about how you came to own her and what she’s like?

Henry was 5 years old when I decided to get Smudge, who's an Old Tyme Bulldog cross. At the time she was 8 months old. She is very hyper, doesn't know her own strength, clumsy and an absolute babe! 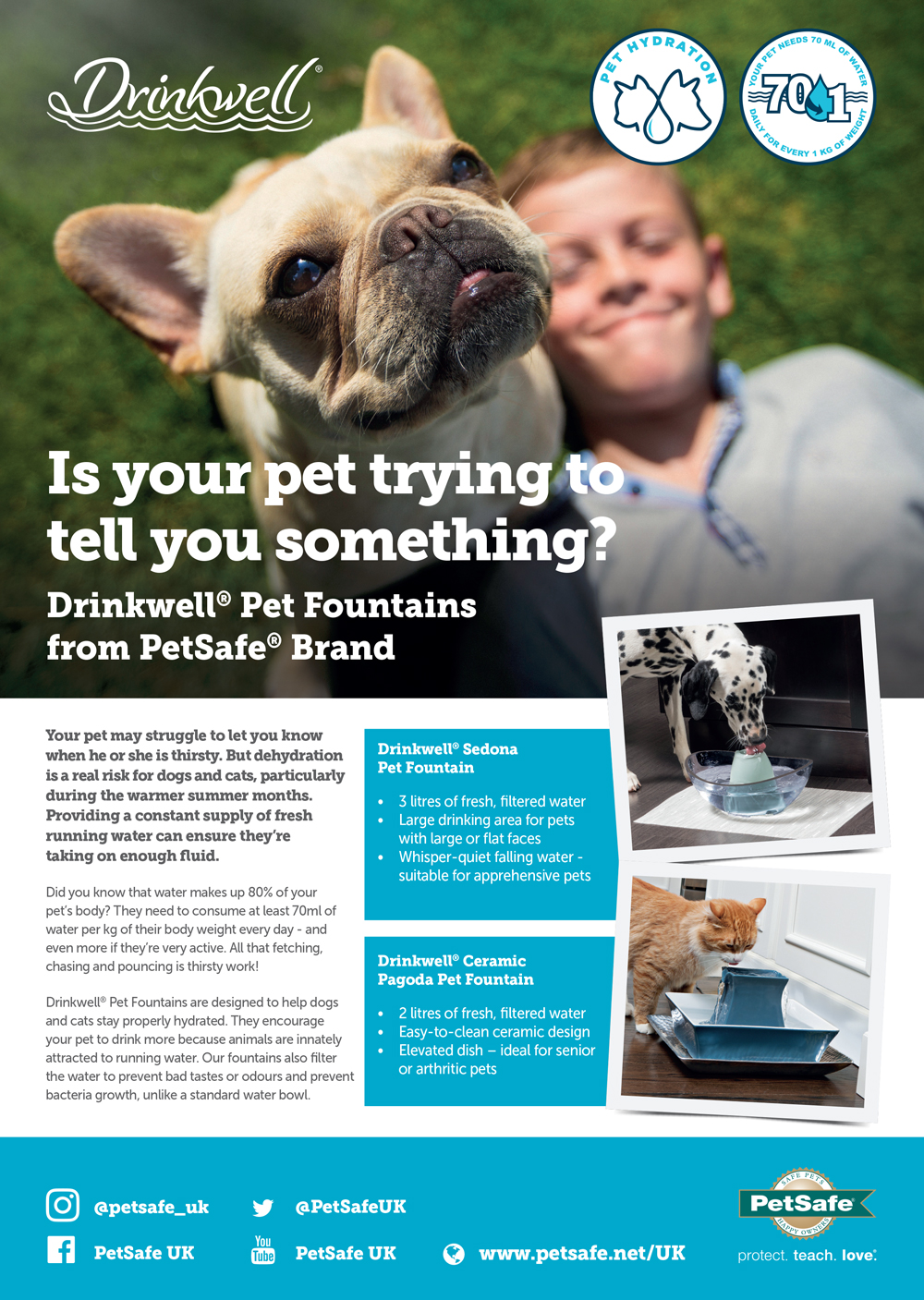 We know they get along brilliantly now (we've seen the video of them sharing kisses!) but was it plain sailing introducing Smudge to Henry?

They hit it off straight away, however a few weeks in after introducing her to Henry, I believe he got very jealous because most of my attention went on training her. I had to be very aware of letting him know that he's wasn’t loved any less.

You seem like a massive dog lover, which we love (obviously). What’s your earliest memory of dogs? Did you grow up with them?

All throughout my childhood I wanted a dog but wasn't allowed one, so I had pet rats, gerbils, hamsters - the lot. Finally, after years of nagging, my foster mum gave in and I went to a pet shop - I was only young so didn't know then about rescuing dogs.

I got a Yorkshire Terrier without my foster dad knowing and I had to give the dog back the next day because he said I wasn’t responsible enough to look after a pet. I've never been so heartbroken I cried for three days afterwards.

You host KISS FM’s 10am-1pm weekday show and a separate show on Sundays which must keep you busy. Do Henry and Smudge ever come into the office with you?

One of many things I love about where I work is that every other Friday some of the team bring their dogs into work and I love it! 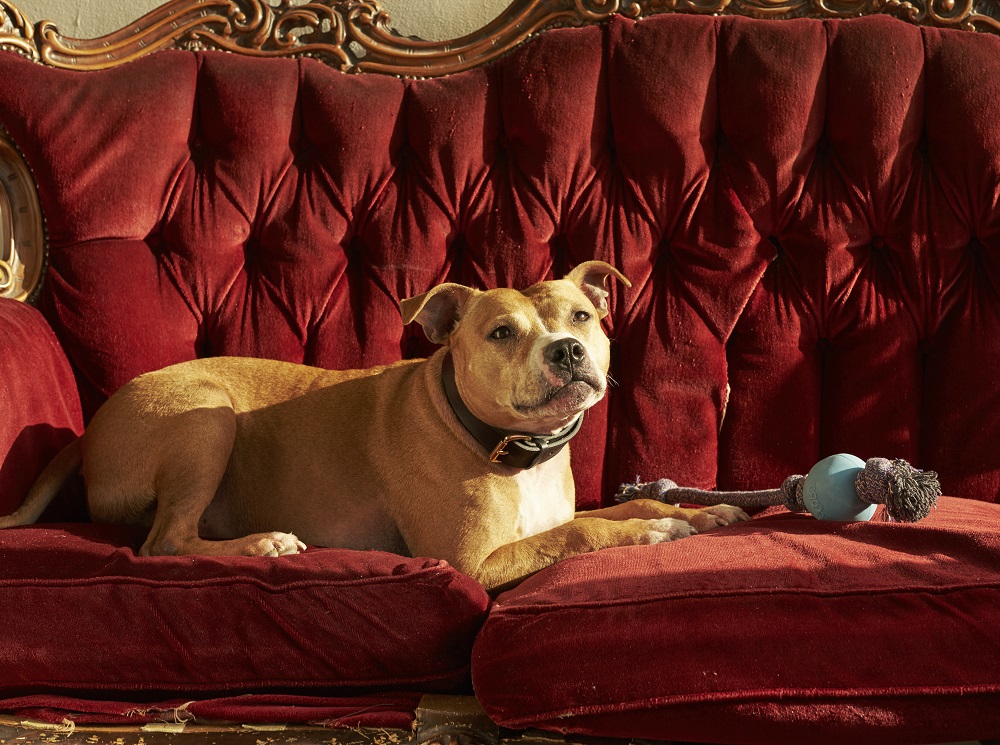 I haven't brought either one of mine in yet because I know when someone walks past the studio one of them will definitely start barking - probably just when the mic is starting up and I'm doing a link! But believe me I am working on this!

If I'm working on Christmas Eve or on Christmas Day this year I will 100% bring Henry and Smudge in and get them on air with me!

We don’t want to wish that you’ll be working over Christmas but that’s something we’d love to hear! Now, moving onto some of our more playful and quick-fire questions, are you ready Pandora?

If Henry and Smudge were artists, who do you think they’d be and why?

Henry would be Kevin Hart. He’s the joker of the pack! Eager to please highly intelligent and the funniest dog ever! 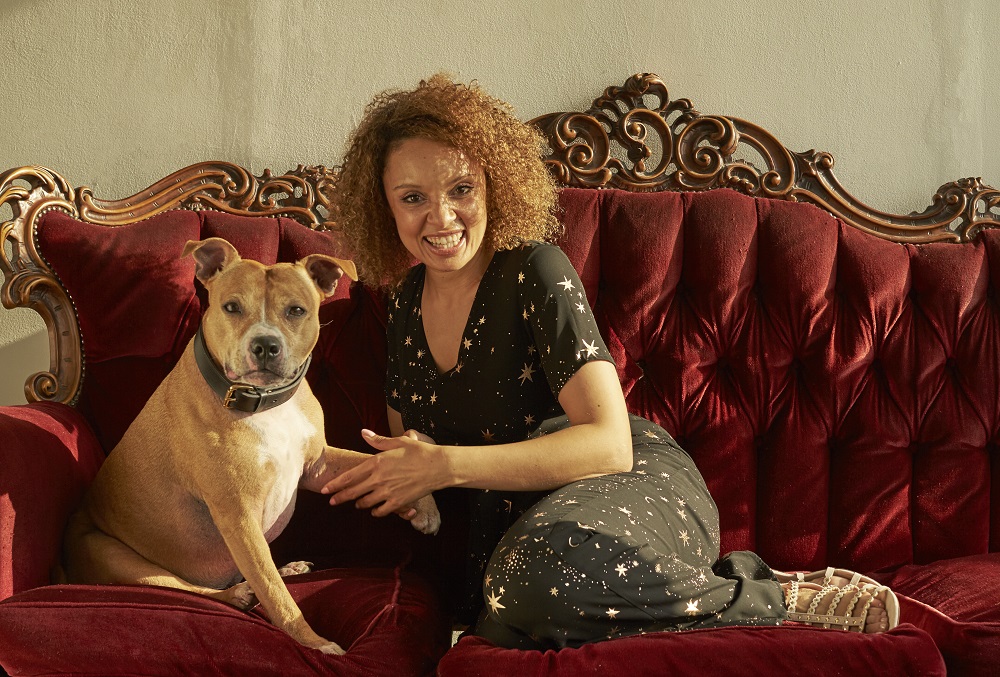 Smudge would be Britney Spears. She's quirky, a little bit ditsy and an absolute babe! 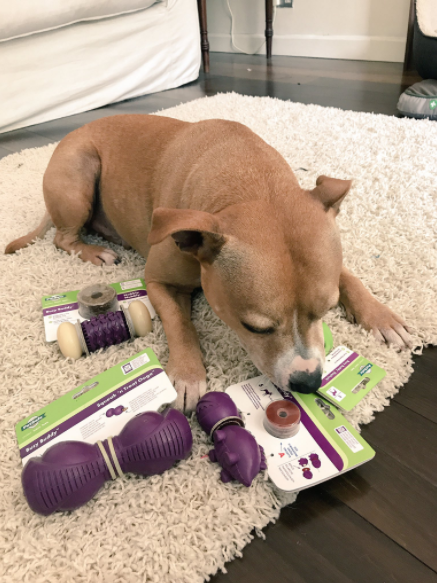 What songs do you think best sums up each of their personalities and why?

Well, I think Britney’s song ‘Clumsy’ says it all about Smudge to be honest.

But for Henry, Dizzee Rascal and Calvin Harris’s song ‘Hype’ sums him up because he’s as hyper as hell. Just like his mummy (laughs). 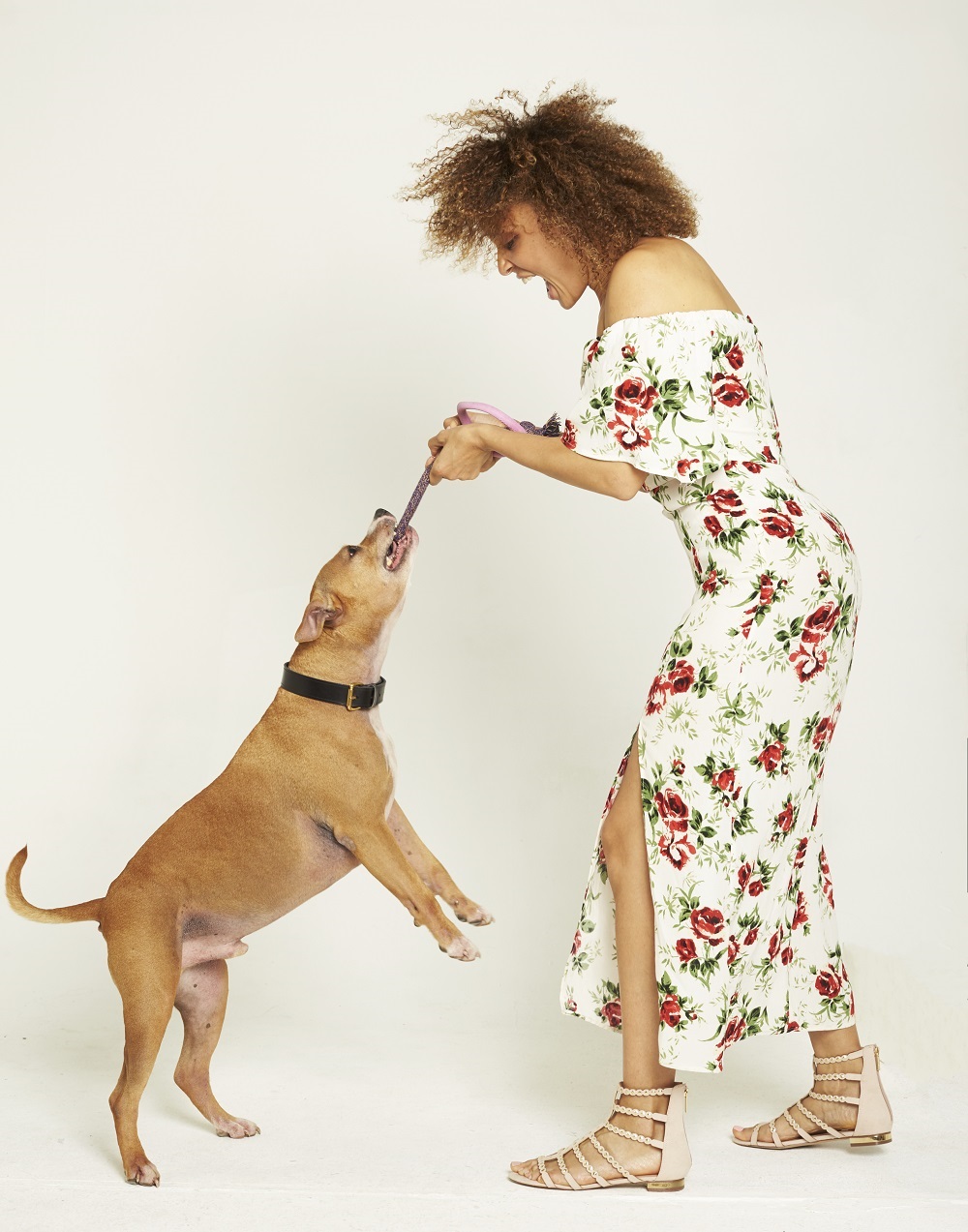 For this question, we ask our celebs to match up the following people’s personality to a breed of dog. It’s a bit of fun based on what we know, or assume, their personality is.

So, if the following musicians – who we know are dog lovers – were breeds of dogs, based on their personalities alone, what type of breed do you think they'd be...

I think the best thing about being a dog owner is the unconditional love you get on a day to day basis. Nothing beats that loyalty!

Great film. Tell us a bit about Henry and Smudge's favourite things. What's their favourite place to visit?

Henry's favourite place to visit is my fridge because he can smell the cooked chicken!

But if we’re going out, he loves Battersea Park, it's his favourite place to go and have fun. There's so much to do there for dogs and he loves jumping in the lake - even though he isn’t really meant to! 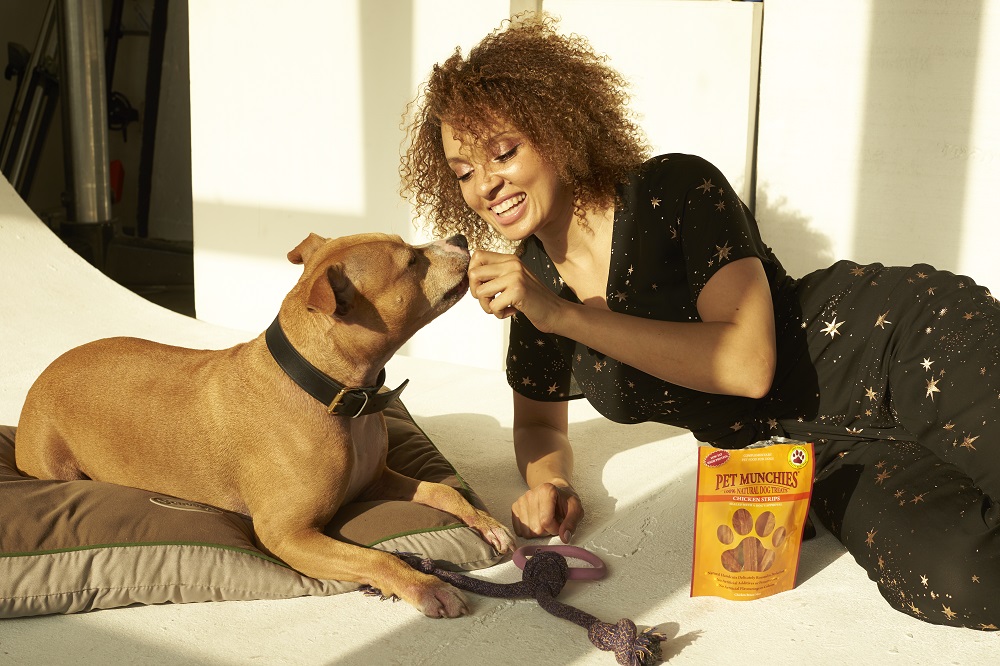 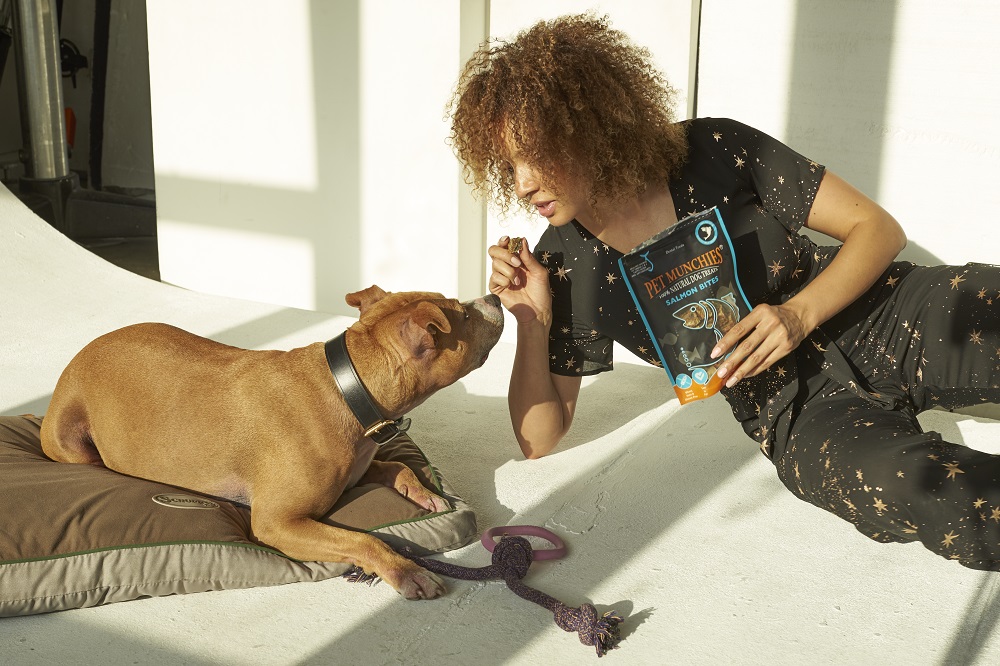 (Laughs) And aside from jumping in lakes, what's their favourite way to make you laugh?

Well, Henry always makes me laugh every night when I tell him to get into his own bed – I say the word ‘beddicots’. He runs upstairs and gets into my bed instead of his own. He actually races me to get under the covers (laughs).

Dogs teach us to love not hate. That is the biggest flaw in human kind. If we didn't hate there would be less destruction in the world! Dogs love and love conquers all! 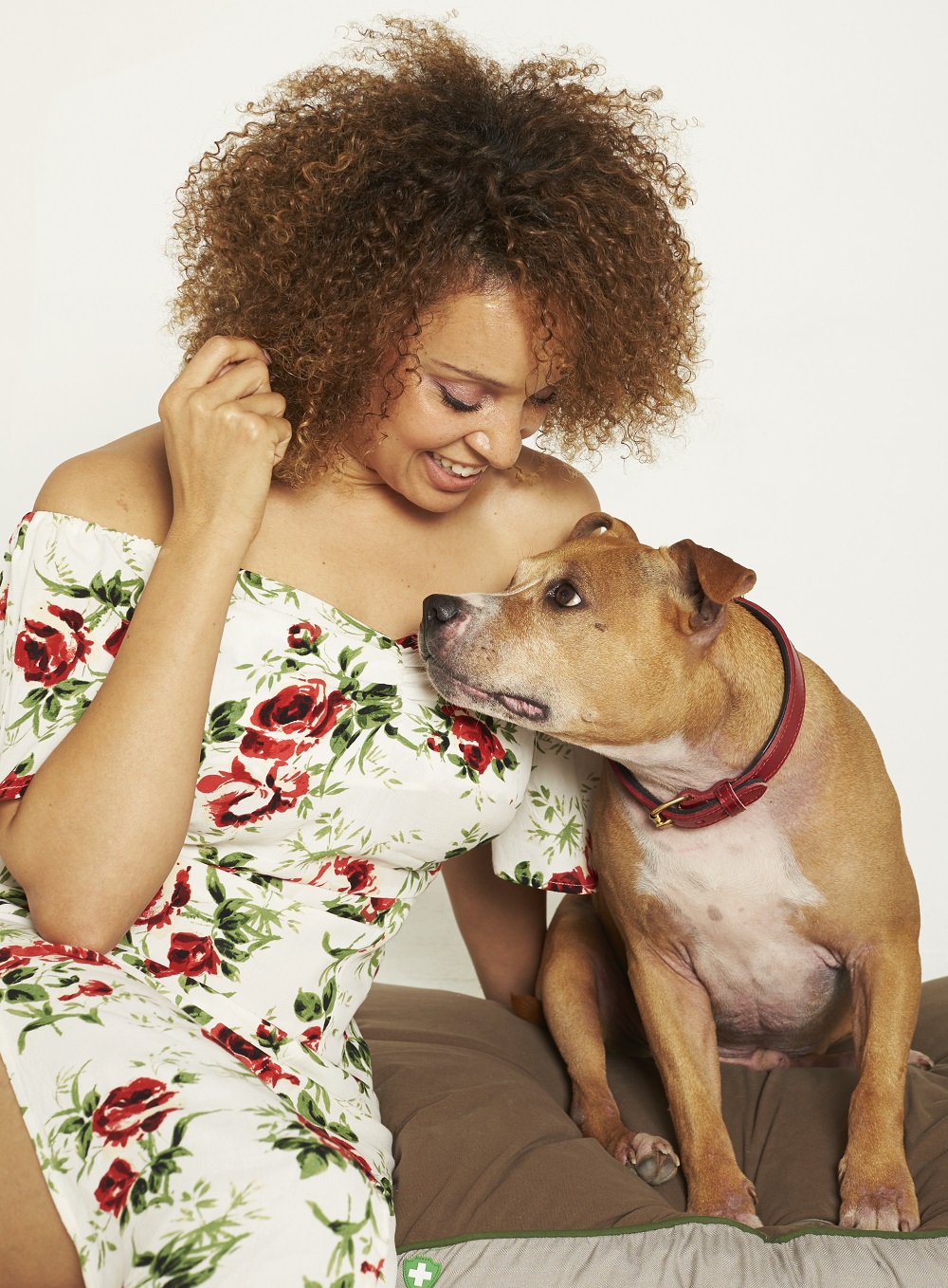 And finally, if Henry and Smudge could talk and answer one question and one question only, what would you ask them and what do you think they’d say?

Let me think about that.

Okay, so I would ask Henry ‘why do you have to come and sit next to me, drop a stinker, then walk away? Why do you do that?’ I think his reply would be 'because I just wanted to share the love'.

And to Smudge, I’d ask ‘who do you love more? Your mummy or your daddy’ and I'm hoping she'll say her mummy (laughs). 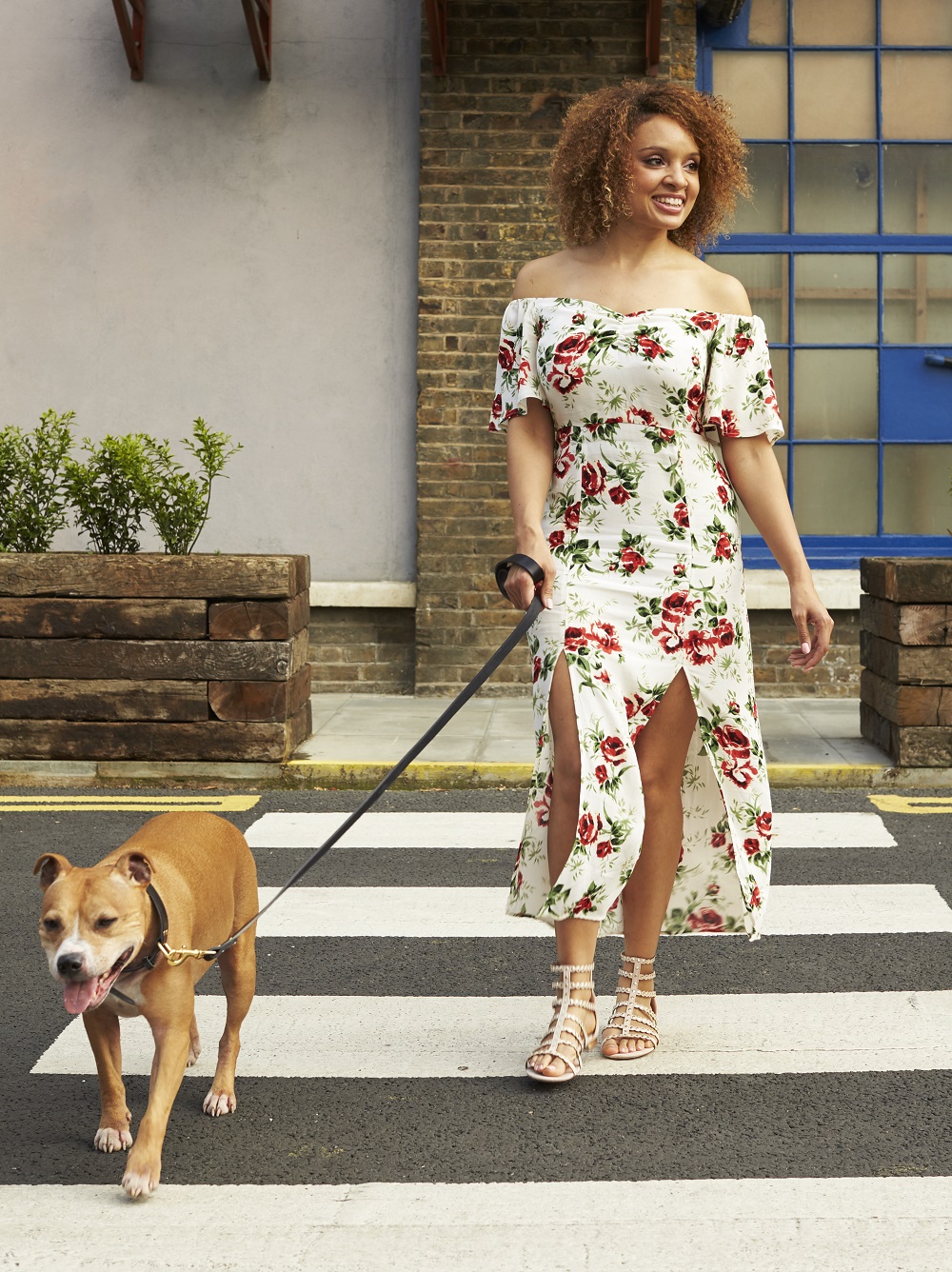 You can catch Pandora on KISS - weekdays from 10am to 1pm. Take a look at Pandora’s official blog www.pandorachristie.com and follow her on Twitter & Instagram @PandoraTweets

PetSafe – For their BusyBuddy dog toys

Adam McArthur: “She Is My Little Buddy”