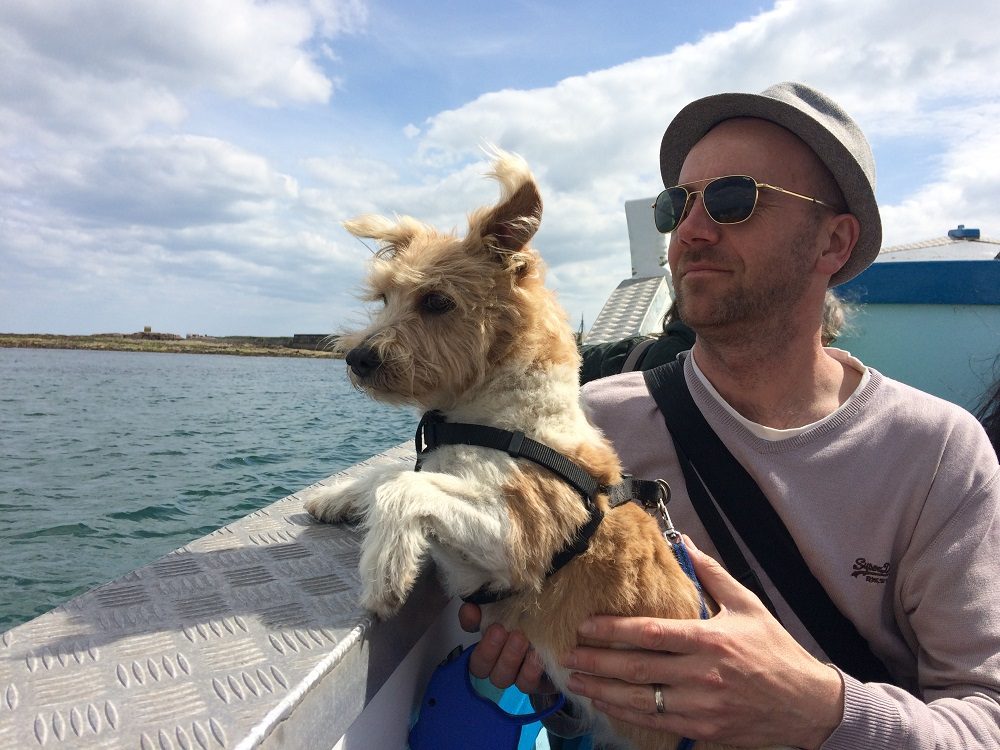 When choosing where to holiday with your dog, what’s most important to you? Do you look for pet friendly activities nearby to get involved in or do you want a home from home with a bit of luxury for R&R?

Brits who like to holiday at home will no doubt have looked at the scenic coastlines of Cornwall and Dorset, but what about Northumberland?

Last month travel writer Paul Wojnicki and his dog, Falco took a trip to the region. This month they share their experiences to help you decide what to do if you’re thinking of visiting with your family.

Our adventures begin with a trip to one of the most dramatic beaches anywhere in the UK; Bamburgh Beach. The pristine white sands and clear (but chilly) waters are stunning and would be packed with tourists if they were in the south-east of the country. Especially since the beach is backed by one of the most impressive castles in the world, let alone England.

Fortunately, this former home to ancient kings, which looks out over the over the beach isn’t in the south east of England and consequently this is prime territory for dog owners, who’s four-legged friends can gallivant on the pristine sands all year round.

Falco’s not one to be daunted by frigid waters, but the waves here are often too treacherous for swimming, so we head to the northern side of the beach, near Bamburgh Lighthouse in an area known as Stag Rocks, where a number of rock pools are deep enough for Falco to swim in and are warmed by the midday sun.

After swimming in the rock pools we head to the giant sand dunes for a closer look at the castle, which unfortunately isn’t dog friendly inside. And to be honest it’s hard to imagine the interior being anywhere near as impressive as the exterior anyway.

After a picnic on the beach, we head to a castle more accommodating to the nation’s favourite pet; Haggerston Castle. And though the castle itself isn’t quite as impressive as Bamburgh it’s going to be our home for the next week; because the former home to one of William the Conquerer’s allies is now best known as a Haven holiday park.

I like the idea of caravan holidays because I like to cook a little something special to add to Falco’s dinner and having kitchen facilities enables us to do this. Interestingly though I’ve never stayed at a Haven park, until now. And I’m happy to report that I’m really impressed.

The company have an excellent attitude toward dog owners and it’s great to see so many dogs on the huge campsite. I count at least twenty different dogs on our first day, most of which are being walked around the picturesque lakes, but a couple of which are being transported in pedalos and one, amusingly, on a family fun bike!

Harrison and Ella, our five and two-year old children, see this and immediately want to take Falco on a pedalo. Falco’s happy to oblige, he always is where water is concerned, and the highlight of our first day on camp is a thirty-minute voyage on a giant plastic swan.

The pet friendly caravan is really impressive as well, I was a little worried that the pet friendly homes might have been older models but our prestige model is very modern, with everything we needed for a perfect family break. It’s surprisingly spacious for a two bedroom caravan and even has an ensuite bathroom as well as the main one. The kids love it as does Falco, who finds himself a plum spot at the foot of the main bed to sleep off the rigours of the day.

The following morning we’re up early to watch the tide going out at Beal, a couple of miles down the road from the campsite. Ordinarily, the tide going out wouldn’t be worthy of postponing Falco’s morning walk, but this tide is a little different from your average one because as it recedes a road magically appears and leads to the Holy Island of Lindisfarne across the bay.

Once we’ve parked at the large car park in the village we head for the island’s main sights; Lindisfarne Castle and the nearby priory. It’s disappointing to see that the castle is currently covered in scaffolding as it’s one of the most picturesque sights on the island. Still, the bay on which it’s perched is beautiful in any case and we follow the coast around past upturned fishing boats - now turned into storage sheds for nets and lobster pots - to the nearby priory and ruins instead.

From the headlands by the priory, we hear the haunting sounds of a dozen or so seals wailing on a sandbank near the mainland.

The ghostly noises add to the spooky atmosphere of the abbey ruins and the church’s graveyard but Falco is unperturbed. He’s tugging us toward the ruins of the Priory, which we admire from outside rather than paying the £16 for a family ticket. Dogs are allowed inside but our children are still a little young to appreciate these things so we head further along the coast instead.

Later we head through the olde worlde village - population approximately 160 - and pick up some souvenirs before driving back to Haggerston Castle for the lunch in our caravan.

We spend the next two days simply relaxing on the Haggerston Castle site, exploring the vast grounds and taking the occasional pedalo voyage on the lake.

As I mentioned earlier, this is the first Haven site that we’ve stayed on and the grounds and the lake are certainly a haven (pun intended) for wildlife. There are ducklings, goslings and cygnets aplenty around the lake, while more elusive animals such as otters and beautiful red squirrels can be found by more determined nature hunters. Haven actually run a programme called 'Nature Rockz' on several of their sites, including Haggerston, for the younger visitors to explore local nature and learn cool bushcraft techniques like lighting fire with sticks.

Harrison is a little young for some of these courses but prefers to explore with his dog anyway. That said he’s more than happy to leave Falco with us while he enjoyed swimming lessons, bungee trampolining and turbo paddling (a tiny boat powered by hand pedals, in case you were wondering).

On day five we take advantage of the sunny weather to visit another one of the region’s highlights; the Farne Islands. These rocky outcrops, two miles off the mainland are famous for the resident puffins, thousands of which whizz around carrying beaks full of fish from the sea and the holes in which they rear their chicks. It’s a truly magical sight.

The harbour at Seahouses is just 13 miles south of Haggerston Castle and is the launch point for most of the region’s Farne Island tours.

Here you’ll find no shortage of companies plying the route but it’s always best to book ahead, especially in the warmer seasons because the trips are incredibly popular and only a limited amount of people can land on the islands at one time.

By far the most famous of these operators is Billy Shiels, whose boats have been running trips to the Farne Islands for six decades and have included several notable guests. Billy welcomed the Queen aboard from the Royal Yacht Britannia in 1958 and the Queen Mother in 1962. More recently Billy hosted Princess Anne aboard and was awarded an MBE for services to hospitality.

It’s unclear whether Billy hosted the Queen’s corgis aboard but his son, who now runs the business, is more than happy to welcome dogs of all shapes and sizes as his boats ply their way across the water. We count no fewer than five dogs disembarking the Glad Tidings as we wait to board ourselves.

Most of the cruises require dogs to wait on the boat with the sailors for the hour or so that you spend on the islands themselves. This is because the National Trust doesn't allow dogs because of the danger to the wildlife. We’ve taken a trip to Inner Farne, which means that Falco has to keep the sailors' company for an hour but they assure us that they are more than happy to look after him “It’s nice to have a bit of company,” the captain tells us.

Afterwards, we return to the mainland and traverse the sand dunes in front of Bamburgh Castle one last time before heading back to Haggerston to relax by the lake and make new friends, human and K9 for the last two days of our holiday.

Did we miss France this May? Not really. The children loved the facilities at the campsite, Falco loved meeting new friends and gallivanting on the beaches and sand dunes, and mum and dad enjoyed taking things easy compared to travelling abroad.

I never thought I’d say this but we might just skip France next May and head back up to Haggerston instead!

The practicalities - things to think about

Haggerston Castle is approximately an hour’s drive north of Newcastle upon Tyne. Bamburgh Castle and Seahouses (for trips to the Farne Islands) are around 13 miles away. It’s a good idea to book ahead for the Farne Islands while Holy Island is only 5 miles away. Berwick upon Tweed is also very close by and Edinburgh is only around an hour north by road.

If travelling so far north (or south for our Scottish readers) is a bit much for you then Haven have 32 other pet friendly parks around the UK. They charge a nominal fee that’s built into the price of the holiday.

Loyalty Is Biggest Thing Humans Can Learn From Dogs

That's according to three models who have shared their stories with K9 Magazine as part of our series supporting Jasmine Dustin's #dogsoverdiamonds campaign. Here's...

It has long been debated if dogs are better at doing life than humans. Dogs don't appear to hold grudges and they don't hate. They...