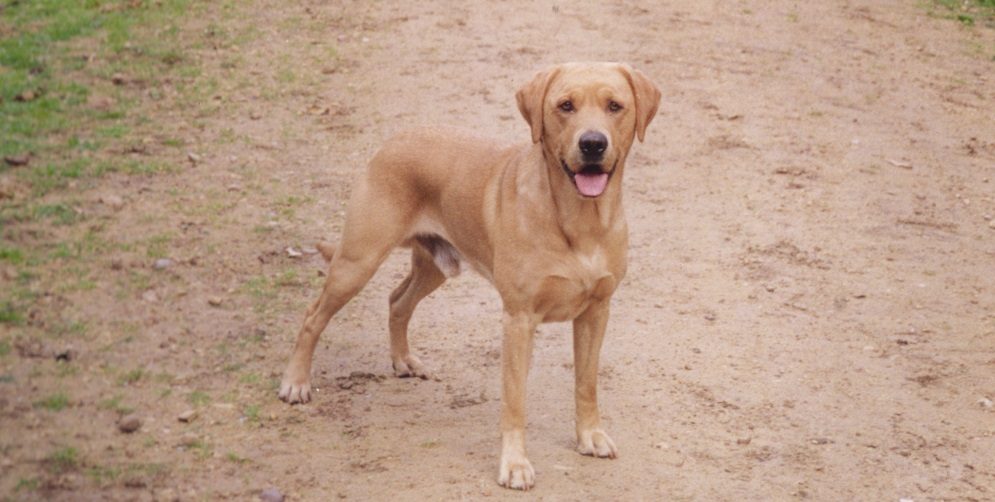 Here we are, 100 issues of K9 Magazine have made their way into the world. Will we receive a telegram from the Queen? I guess anything is possible.

Indulge me for just a few seconds, asks Ryan O'Meara.

I'd like to tell you about how K9 Magazine came about. It won't take long. K9 Magazine was a mistake. I wished I didn't launch it.

Ahh. There. It's taken 100 issues and you have the dirty little secret that's been following me for years.

I suppose I ought to follow that up a bit, eh?

In the year 2000, I started a pet publishing business. My plan was pretty simple. People have pets, people like reading about pets. At the time, I was a professional dog trainer and I had been on the Internet for a few years by then. I remember the time when the Internet was mainly just text and even small images would take minutes to download on the screen.

Yet there really wasn't much on the Internet about the thing I was most passionate about: dogs.

Ryan's first dog, Jackson, who inspired him to become a dog trainer

So the company was born. Off we went. We launched websites, we got readers, we got customers. We have a business!

In my business plan I had stated that I would like to launch a 'real' magazine many years in the future. As with most business plans, that changed quite quickly. As we made our way around prospective new clients/advertisers we were met with a very familiar objection to out and out Internet-only publishing business.

"We love what you're doing but we just don't do Web stuff. If you had a magazine we could work with you and we could then throw a few Web type things on top of it."

We heard this a lot. In fact, on a few occasions we were told that the Web was a temporary infatuation and was not likely to be very popular in the near future. Hmmm.

Well, I guess there's only one thing for it, I thought. We'd better launch a magazine. All of our prospective customers are telling us that's what they want, so that's what we'll do.

Why was it a mistake?

The naivety of youth, you might call it but away we went.

We will call it K9 Magazine. We will make a magazine about dogs, but most importantly things about dogs that we'd want to read as dog owners - just because we love dogs doesn't mean that we don't like music or science, or want to hear about dogs invading football pitches, we thought. We will make it great. How hard can it be?

Every mistake you can make when publishing a magazine, we made. It took us 7 issues to get the magazine to something close to what we had all envisioned it to be. Given that we were a quarterly publication at the time 7 issues is nearly two years of work.

But then it happened. We started to get the hang of it. We had readers. We had readers who would write to us and tell us much they enjoyed it. The magazine started to be talked about. I started to be asked to appear in the media to talk about dog things, all because I was the editor of a dog magazine. That's weird don't you think? I mean, I didn't particularly know anything more about dogs at that point than I did before I was a magazine editor, but the fact that I WAS a magazine editor seemed to make the media more interested in hearing my opinions on a range of dog issues.

We got celebrities to appear on the magazine's cover and talk to us, passionately, about their dogs and their love of all manner of dog related things. We, famously, got one of the world's most well-known singers, Mariah Carey, to give us a world exclusive interview at a time when she wasn't particularly speaking to any media. How? Why? Because it was about dogs and she loves dogs. That simple.

We might have launched K9 Magazine at a time when we weren't ready but now, after 100 issues, I have to say I'm pretty thrilled that we did. It's grown, it's evolved, it's been a lot of hard work but the enjoyment it's brought to us and to the many people who've read it has all been worth it.

So now you know. I made a mistake in diving in to launch K9 Magazine when were totally clueless but here, on issue 100, I'd like to take up another ridiculously hard challenge. Picking just 5 of my favourite K9 Magazine articles. Here we go....

5. The Rise of The Designer Dog - What's The Problem?
Read it: https://www.k9magazine.com/the-rise-of-the-designer-dog-whats-the-problem/

4. The Anatomy of a Dog Attack
Read it: https://www.k9magazine.com/the-anatomy-of-a-dog-attack-2/

3. A Day in the Life of a Cadaver Dog
Read it: https://www.k9magazine.com/cadaver-dog/

1. A View From China: What's a Dog's Life Really Worth?
Read it: https://www.k9magazine.com/a-view-from-china-whats-a-dogs-life-worth/

We hope you enjoy what we do. If there is anything you'd like to see more of from us, please comment below and share your opinions - or tell us what your own top 5 favourite features over the years have been and let's compare!

What the Dog Knows: Understanding How Dogs Perceive the World

At K9 Magazine we're kind of obsessed about what dogs know that we don't yet know they know, if you know what I mean....

In This Issue... Behaviour: Could Your Dog Have ADHD? Talking Point: What You Need to Know About the Puppy Trade  Book Club: Understanding How...

Have you ever wondered what every day life might be like if you were deaf? If you have a passion, such as music, could...

Have you ever stopped to wonder why some dogs spend longer in rescue than others? Often it's simply bad luck, but everyone's luck has...