This year marks the 10th anniversary of puppy farming campaign group, Puppy Love Campaigns. Their work isn’t solely about bringing public awareness to what puppy farms are, although this is a part of it, they also have a well-earned reputation of infiltrating puppy farms with their evidence being relied on to close puppy farms, resulting in happier futures for the rescued puppies and their mums.

This is the most important reason behind their decision to remain anonymous. It isn’t just a preference to let their work speak for itself rather than let personality take over, it’s essential to their undercover work. How they work doesn’t always gather fans, but in my opinion, it should.

If they are willing to share their experiences to help people, such as MPs and lawmakers, who are in a position to create change, to create that change, then listen up. Anyone can talk the talk, but unless you’ve walked the walk, like they have, you don’t know as much as they do. You can’t. I watch football, but I’m not Messi. If Messi wanted to give me a football lesson, would I think I knew more than him enough to ignore him?

Over the last 10 years, a lot of change has happened. Undoubtedly more people know more about puppy farms now than then, social media has seen to this. But has it made a real difference, or as part of the growing animal welfare crisis in the UK, has the problem worsened in spite of this?

I asked Puppy Love Campaigns (PLC) to share some of their stand out memories from their years of working to end puppy farming.

Here are some of the highest highs and lowest lows they’ve experienced in their own words.

Helping journalists to infiltrate for TV shows (and win awards)

In 2008, PLC was invited by S4C to help them make an episode of the popular current affairs programme ‘Y Byd ar Bedwar’.

This was the first TV programme of its kind dealing with puppy farming and proved to be a wake-up call for Wales, which had been a hub for puppy farming for a long time.

We secured all the evidence and footage required by the programme makers, visiting puppy farms across Carmarthenshire. Even though we literally dragged the reporter, Sian, through the mud and almost got her electrocuted, she stuck with us and the award she received for the programme was well deserved.

The ripples from this TV programme continued well after its airing. In 2010, Welsh media reported that the film with our footage was instrumental in applying sufficient political pressure for change that new breeding regulations were introduced in Wales. 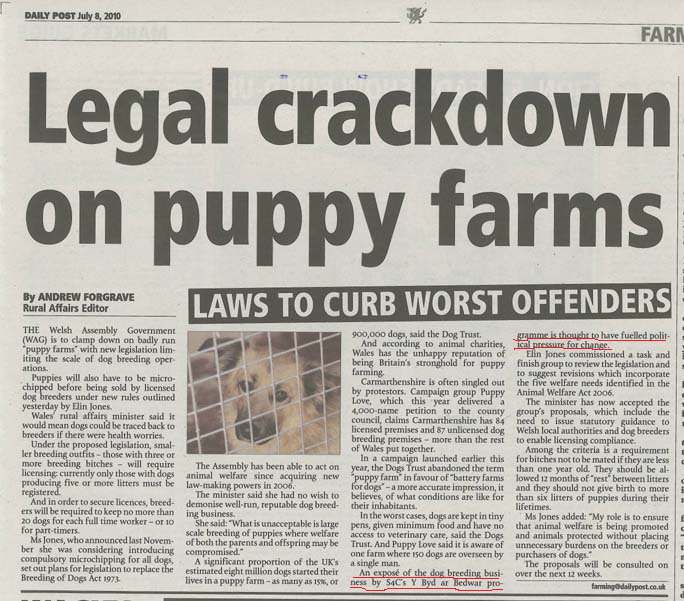 This public recognition of what our evidence and footage might achieve for the dogs spurred us on to help make many more TV exposés. We remain the first port of call for media wanting more knowledge, information and footage from inside UK puppy farms.

Exposing on National TV the largest UK pet shop, Dogs4us with branches in Leeds and Manchester was another first for us.

The programme shocked many viewers and we were more than happy for Jason Farrell of Sky News to use our footage and the information we’d gathered to prove Dogs4us used Welsh puppy farms to source pups.

In 2015 and 2016 we contributed our footage, information and inside knowledge for two BAFTA award winning TV programmes which again exposed Dogs4Us and their links to puppy farms: 'The Dog Factory' and 'Puppy Dealers Exposed', with journalist Sam Poling are two brilliant documentaries which once again shocked the nation.

As a small group reliant on donations and public support, it was heartening for us to receive a large donation from a kind gentleman who was grateful for what we do after watching 'The Dog Factory'. This money directly enabled us to carry on our quest to end the suffering of breeding dogs.

Public support helps us to continue, even on dark days, and we have plenty of those.

Protests against Dogs4us led to a vendetta against us, risking our families

For a number of years, we organised and attended regular, monthly peaceful monthly protests outside the Dogs4Us store. This made many people aware of the puppy trade and all it involves.

Unfortunately, the Dogs4us story also brought some serious lows for our team as we’ve been subjected to a Dogs4us vendetta against us. 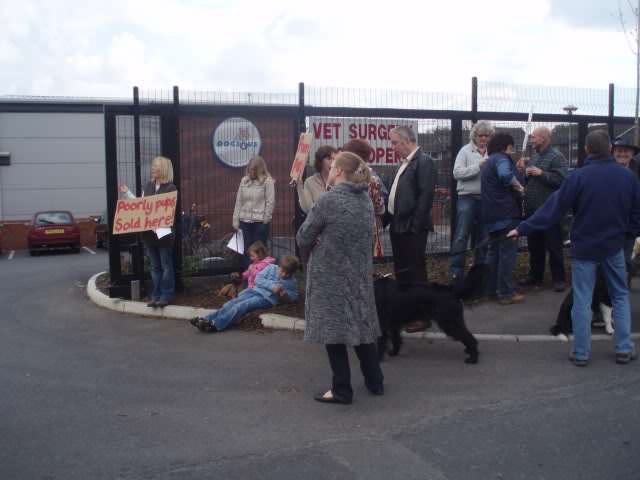 This has included taking photos of our homes and publishing them on the internet in an attempt to intimidate us. Knowing we were being watched while at home, having our vehicles damaged and lies being spread online about us was unpleasant.

But, our team have always refused to be intimidated by anyone. The dogs need our voices and we have always continued to fight for them regardless of opposition or intimidation tactics. 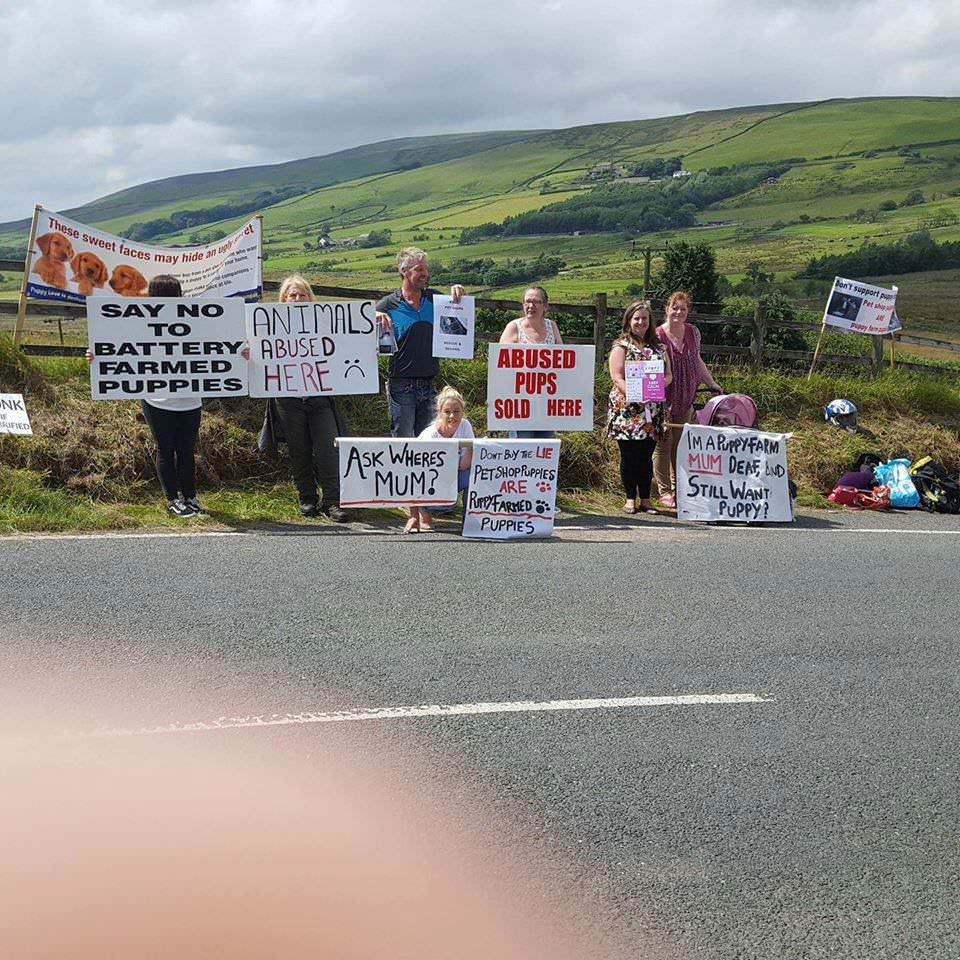 Petitioning Carmarthen Council for changes in Wales, but is a change coming?

When Jan Gilmour presented her petition to Carmarthen Council the huge support for us there was amazing. People came up to shake our hands and thank us for battling for the dogs.

Quite simply, people don’t want Wales blighted by puppy farms. But it is.

And, sadly for us, after years of exposing what’s going on, fighting to get places closed down, and dogs to safety, dogs are still suffering badly.

Local authorities are not protecting breeding dogs, despite the new powers that they have been given in Wales. It’s deeply frustrating for us to witness years passing while the Welsh government and local councils appear content to sit back and let it happen. 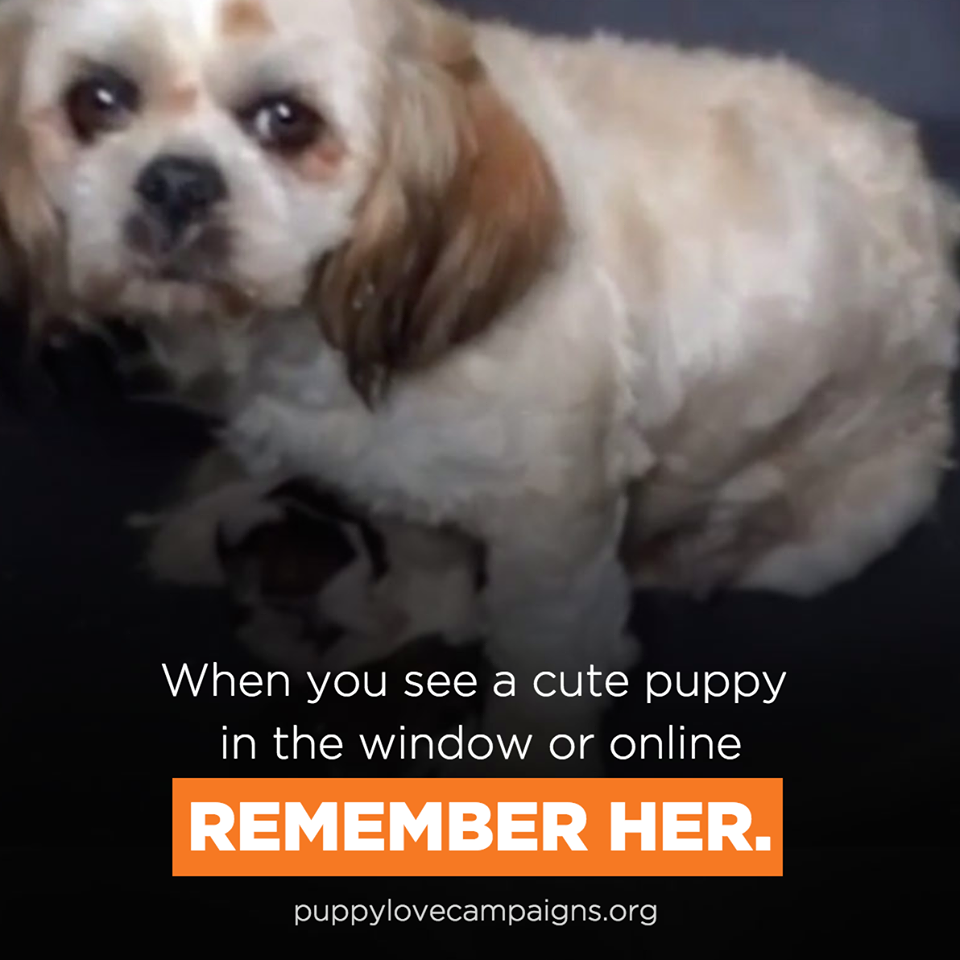 ‘It’s tough getting justice for breeding dogs, especially in Wales’

In truth, nothing in Wales has changed and we have the evidence to prove it.

We’ve watched a Ceredigion Animal Welfare Officer deal with an unlicensed puppy farm we reported, knowing she herself was a dog breeder and puppy seller.

Animal welfare concerns in the case were dismissed and the breeder was only prosecuted for breeding without license. This showed us there will never be any justice for breeding dogs in Wales.

Another example of this is when we saw a puppy farm, which we reported in Ceredigion in 2011 being allowed to continue unhindered for six long, miserable years until the dogs in the care of the abuser were close to death.

It was a heartbreaking case which made the national news. It’s so awful and one which could have easily have broken us and caused us to hand in the towel. But it didn’t, it hasn’t and we are still here for the dogs.

Getting many breeding dogs to safety and seeing them survive the horror they have been through keeps us going.

Seeing them take in the world around them and overcome the fears they have of so much space, having been confined in small, dirty often dark environments. They slowly begin to trust humans and their forgiveness is humbling.

Watching a pregnant female give birth one week after being rescued from a puppy farmer’s clutches, enjoying the sheer comfort of soft bed, blankets and good nourishing food for the first time in her miserable life, keeps us motivated. Knowing they will be safe and happy for the rest of their lives is priceless. 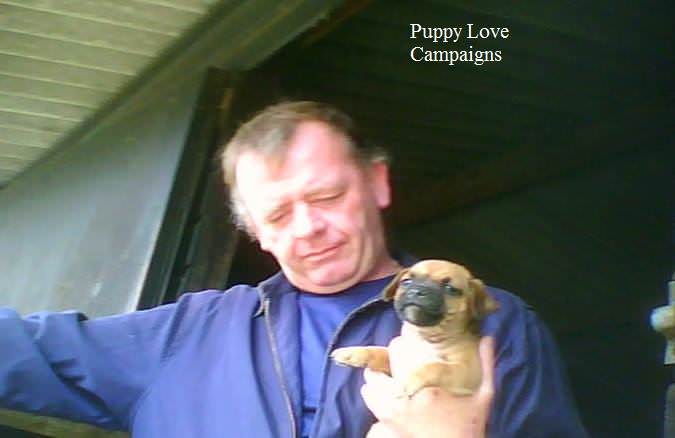 Like Buddy who had all his teeth removed when we rescued him and who, despite his years of suffering and pain has made a wonderful, faithful companion who these days loves nothing more than his soft food and a belly rub. 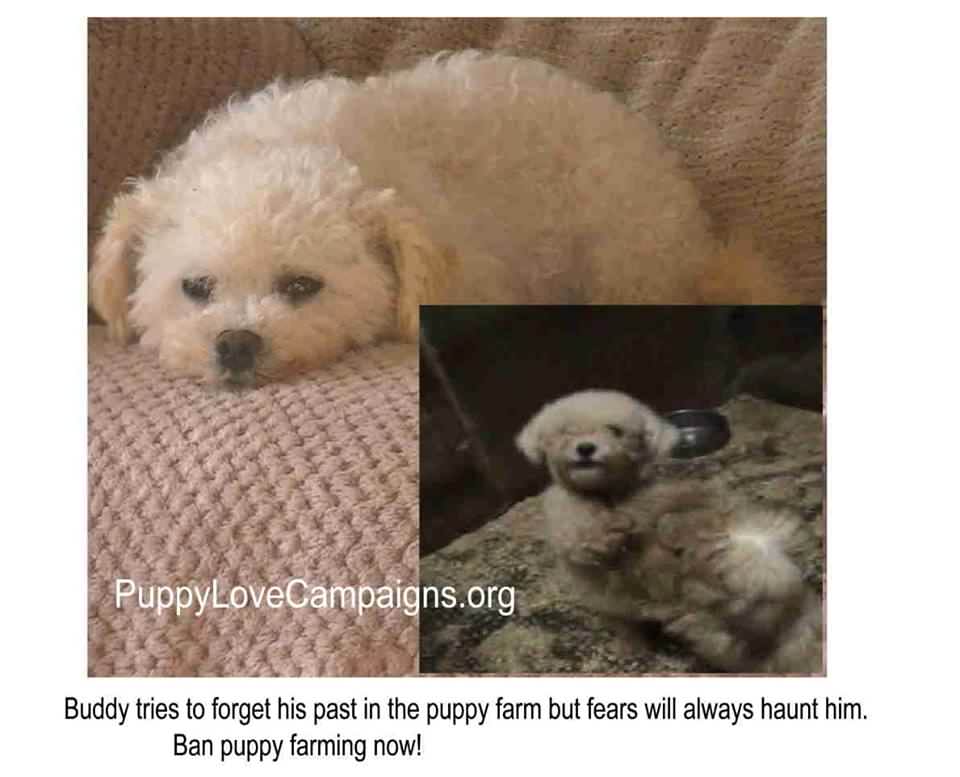 Or Louie (Jan’s dog) who was taken by his breeder to be destroyed as a very young old pup because he had a fused back leg. Fortunately, he was rescued and now aged almost 9, he loves his walks in the park, even trying to chase the odd deer when he spots one. 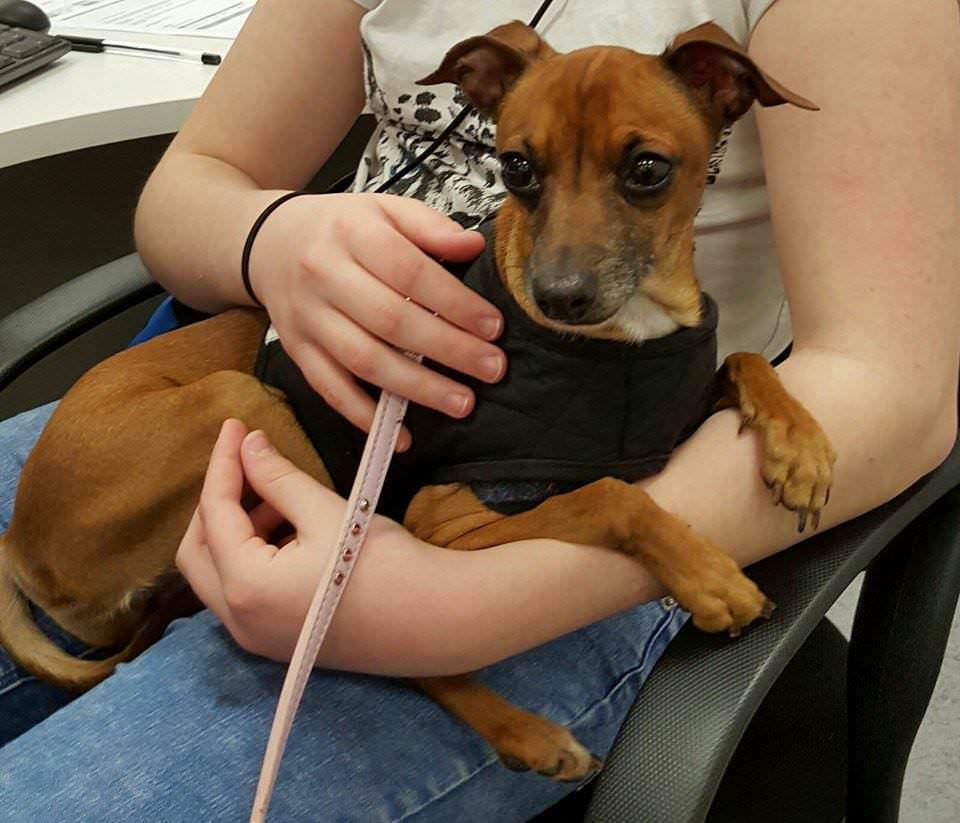 Rose was kept locked up as a breeding machine for four years, she's now free (and her puppy farmer closed down)

The future of the puppy farming industry

For the past 10 years, we’ve been exposing an industry that shows no signs of shrinking.

Legislators don’t seem to grasp what’s required to end the misery for the dogs, or they don’t have the political will to do what’s necessary. We know there are good people who want things to be better but in 10 years, we’ve yet to witness anything at a political level that’s made any positive difference to the breeding dogs.

For us, seeing more and more people buying farmed pups over the internet without any research, despite all the information available is disappointing.

Some do it knowingly, while others are being duped by people who make it their business to sell as many puppies as they can, no matter how much suffering this involves. 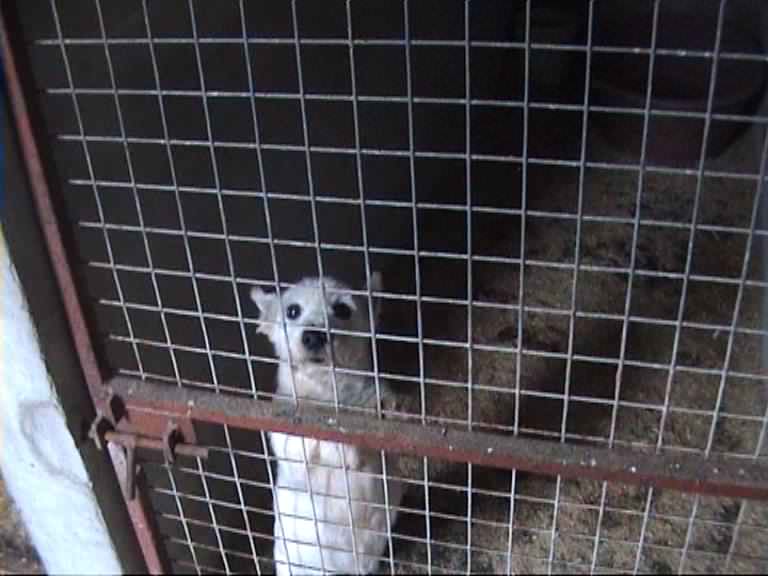 Buyers must shoulder some of the blame for fuelling an industry based on greed and cruelty. When rescues are full to bursting with perfectly healthy but homeless dogs, the booming puppy business is something we at Puppy Love Campaigns cannot reconcile ourselves with. Not when we know, first-hand the extent of cruelty this business involves.