Gena Lee Nolin, is best known for appearing in the TV series 'The Price Is Right' and of course as one of the iconic stars of 'Baywatch', but there's a lot more than meets the eye with this blonde bombshell.

After a successful acting and modelling career, she recently released her first book 'Beautiful Inside and Out: Conquering Thyroid Disease with a Healthy, Happy, "Thyroid Sexy" Life', an in-depth look at her 20-year long struggle with a misdiagnosed thyroid disease, marriage and motherhood.

Kim O'Meara caught up with Gena to hear all about her new book and family life.

Tell us about your dog – we'd love to know everything about him!

We have Bulldog named Hank who has been with us for 6 years now. My husband has always loved the breed but before we settled on a breed, we did our research to find out which dog best suited our family and lifestyle, good with kids and so on, and Bulldogs kept coming up.

We went and met some and we fell in love with Hank, we've been so lucky with him. We just love him to death, he's so funny – he has a giant personality and can be really stubborn, a breed trait really, but he's a sweetheart and so gentle with the kids.

I grew up with dogs, as did my husband, so we knew we wanted our kids to grow up with animals around them because of all it teaches them about respect for animals and caring for someone other than themselves, and how to love and be loved.

Most of our readers will remember you from your days starring as Neely Capshaw in 'Baywatch'. How do you reflect on those days and how TV has evolved?

I think TV nowadays is a very different world, I like certain things but reality TV has really taken over, and a lot of reality is heavily produced, which a lot of people don't always realise because it has a borderline script, and in fact I didn't realise myself until I was involved in a reality show and I discovered then.

Reality has the appeal for some viewers because you might have a character that's a loose cannon, so they're made for TV.

Going back to Baywatch though, our show was authentic but I think it gave people a certain opinion about me. That's been another great thing about the book, people realised there was a lot more to me than what they thought. 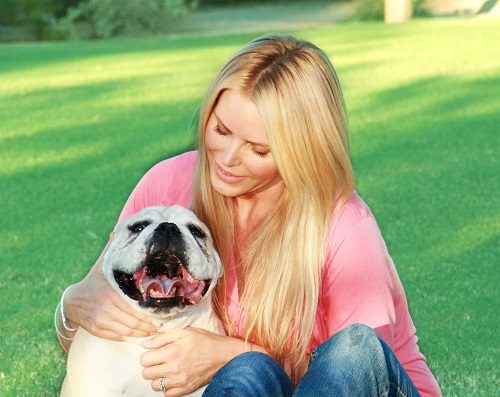 What led you into acting and modelling? What do you think you would have done if you hadn't followed that career path?

I'm really not sure, I have thought about this before and I think I'd have done something where I was a 'people person', maybe something medical.

Or maybe something like interior design, I love being creative. I might have even still ended up in the entertainment industry but something creative behind the scenes.

It's like a light goes off on me as soon as I'm around design and creativity.

Your book 'Beautiful Inside and Out' is about to hit the shelves. After suffering from the disease yourself for the past 20-years, what was it about now that you felt was the right time to release your story?

It began when I started a Facebook group, Thyroid Sexy, and it grew and grew with people joining and telling their own stories about living with thyroid disease, some so similar to my own. It was overwhelming the support I got.

From there, I hooked up with a writer and we collaborated to write about my journey dealing with thyroid disease. There's never been a celebrity come out and talk about the disease.

I wasn't diagnosed quickly, and so many people are misdiagnosed. It's pretty intense. One week you can be feeling great, the next week you don't change anything and you'll be 8lbs heavier and you won't be doing well, so it's a battle. 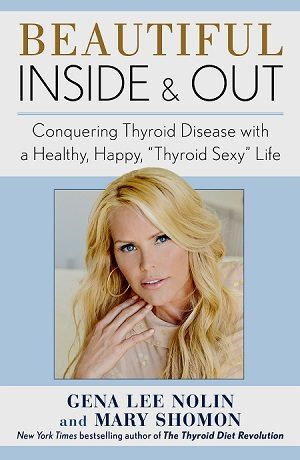 The book is a combination of my journey, my personal stories combined with doctors and experts on the subject. The foreword is contributed from a leading MD, I'm so proud of it.

People might have looked at me as a bimbo before but because of the book I've moved into a different space. People now look at me as the mother of four who's been dealing with a thyroid disease for many years. I really open up in the book and so I think, from what people have told me, opinions have changed about who I am and they see there's much more to me behind the big boobs and blonde hair.

Mottos. Most of us have them, what would you say yours would be, and what do you think Hank's motto might be?

(Laughs) For sure, I think Hank's would be 'chill out'. He's such a laid back dog, kind of lazy but loveable with it.

The kids might be running around him screaming and playing and he'll move his head or eyes, but his body will stay in the same position and you can see him almost saying to them 'chill out'.

Mine would probably be 'live life to the fullest'.

If you were to swap roles with Hank for a day, how do you think he would cope being you and what would you most love about being him?

(Laughs) I could imagine him saying 'Beam me up Scotty', the poor guy wouldn't be able to cope I think. He's such a relaxed, laid back dog I don't think he could be on the go all the time.

Me on the other hand, I'd love being him. I'd be in heaven just being able to chill out and relax by the pool all day – I'd love it!

Miley Cyrus – I think she'd be a Pomeranian. Little, cute and care free.

Jay Leno – He'd be a Border Collie cross German Shepherd I think. He's quirky, quick, smart, pretty and so funny. I could see him in a talent show because he'd be great at tricks!

Torrie Wilson (former WWE and K9 Magazine past cover star) – I have such a soft spot for Torrie, she's such a warm human being and a dear friend. She's such a dog lover as well. She's so gentle and loyal, she's definitely man's best friend – not just because she's gorgeous. I think she would be a Golden Retriever because they're so happy and they have such smiley faces. Plus, they're tall and blonde and Torrie's 5ft 9, curvy, tall and gorgeous. She's so dear to my heart, she'd do anything for you and is the kindest, sweetest friend.

Gordon Ramsey – I think he'd be a Labrador because he has a loud bark but in reality he's such a funny, warm guy. Not what you see on TV. He's a family man and a good guy.

Big dogs or little dogs – I don't have a preference really, I was raised around German Shepherds but Hank's a small/medium size.

Pedigree dogs or cross-breeds –  Our next dog will be a shelter dog and I don't mind what it is so I have no preference at all.

What is the biggest mis-truth you can remember reading about yourself in the press or blogs?

(Laughs) Over the years there's been so much, I try not to read them. They've said everything from I'm a bimbo to I've had plastic surgery, ridiculous things, but you can't stand on a soapbox and shout 'that's not true' about everything so I try to ignore it as much as possible.

Howard Stern says it best 'there's so many haters out there, you can't make everyone happy'.

I'm actually very shy. Even my mom doesn't think I'm that shy, but I really am. When I'm out socially and there's a big crowd, I get so nervous. And public speaking – urgh! I'd rather do anything than public speaking.

Describe the last time you laughed out loud because of something you saw Hank, or another dog do.

We were babysitting for a friends dog, we call her Hank's girlfriend, and we were all outside relaxing. The next thing we notice she's all over Hank humping him and he's just sitting doing nothing with a look on his face like 'here she goes again'.

After a time, the kids started asking 'is she cuddling him again?' and we had the whole family there, and she just kept doing it.

(Laughs) It was funny though looking at his face. Poor Hank.

Taking inspiration from BBC Radio 4's Desert Island Discs, if you were castaway on an island and had to choose 7 songs to take with you, what would you choose and why?

I really love Dean Martin and Frank Sinatra, I think I'm an old soul because I love that old music.  I'm quite into John Mayer, Michael Buble, Pearl Jam, Radiohead and also Robin Thicke at the moment.

I also really love some of the current hip hop stuff or some of the one hit wonders which get you up dancing.

I think it's the unconditional love and the wagging tail that greets you when you walk through the door and they're just happy to see you, regardless of how your day went they're happy to see you.

All they want is to receive and give love.

Finish the following sentence, my dog is ... lazy, quite frankly! And I love him.

And finally, this is always a tough question and often requires a fair degree of thinking time but….If Hank had the ability to speak and answer one question and one question only, what would you ask him and what do you think he would say?

I'd love to know if he's happy, and I know he is so let me think of what else I'd ask.

If I could just say something to him though, he's so afraid of water, we have a little life jacket for him to float around in the pool, so I'd love to say something to make him less afraid.

If he could reply to me though, I'd love to ask him 'what it's like to be a dog' and I'd be fascinated to hear the answer.