A two-year investigation by The Mirror newspaper revealed that dog thefts rose by at least 20% in the UK. The research revealed more than 2,400 dogs had been stolen in a two year period with the illegal activity worth an estimated £100,000 to criminals.

Staffordshire Bull Terriers, according to their study, were the most stolen dog breed, which could worryingly be tied to a rise in dog fighting reports. 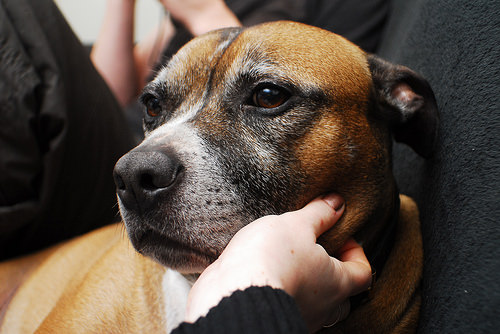 Speaking to the newspaper, Sylvia Tabor, chairman of the Dog Theft Action charity, said: “For thieves, the rewards can be high and the risks low. So it’s sadly seen as easy money. In law, dogs are classed as property like a TV, so sentences are low for taking a living creature away from its family. Unfortunately, it can also often be seen as a low priority by police.”

How to Keep Your Dog Safe: How Do I Prevent My Dog Being Stolen?

After the theft of their Miniature French Bulldog , Tim Bristrow and Jayne Hayes set up Doglost. Following an agonising six week search the couple got a tip off relating to the whereabouts of their missing dog Hermy, which lead them to the idea that spawned Doglost.

In just one calendar year Tim and Jayne managed to reunite over one thousand missing dogs with their owners. An alarming amount of missing dogs, some of which were stolen from their owners.

When Lavinia Broome’s four-year-old Springer Spaniel was stolen from her home in Wiltshire in April she was devastated. “I couldn’t understand why someone would want to steal my dog,” Lavinia said. “Molly is like a best friend to me and not knowing where she was or whether she was OK for so long was awful.”

Determined to find out where her beloved Spaniel was, Lavinia scoured the country for news but for four months, heard nothing. Just as she began to fear the worst, she saw Sheena Seagrave of Missing Pets Bureau on the Richard and Judy Television Show and realised there was someone who could help.

Sheena said: “Lavinia called the next day to register and I immediately added Molly’s details to the national Missing Pets Register and forwarded them to the RSPCA and other charities. I gave her a lot of advice and was pleased to hear she was already doing everything right – including checking the local papers for adverts selling dogs matching Molly’s description. This is where we believe many stolen dogs are sold.”

Whenever an un-spayed dog is stolen, Missing Pets Bureau recommends the owner checks their local papers for adverts selling litters of the same breed. Knowing Molly had recently been in season, Lavinia didn’t miss a single copy and just days later, on 6th August, there it was: an advert for eleven Springer Spaniel puppies!

“The timing was perfect so I swallowed my nerves and took a friend with me to meet the breeder. The puppies were £250 each and I said I’d buy two, then asked if I could see the mum. Luckily, he agreed and I knew it was Molly straight away because she’s very distinctive and has a teat missing. She is also microchipped.”

Lavinia then bravely confronted the breeder, demanding to know where he had got the dog from. “He said he had found her at a rescue centre but let me take her home with the two remaining puppies. I was so relieved to have her back.”

Sadly, one of the eleven puppies had died and eight had already been sold to unsuspecting buyers. Lavinia believes the dognapper could have made as much as £2,000 from the litter.

“It’s terrible to think someone has made so much money from stealing my dog,” she said. “But the puppies are beautiful and had I bred them myself, I probably would have kept two. I’ve called them Etti and Polly and they are an absolute joy.”

“We hope more can be done to stop criminals from stealing people’s dogs,” Sheena continued. “It’s a shocking crime that causes a huge amount of grief and pet owners need to be aware of it so they can take precautions in time.”

Asked what advice she could give to dog owners, Sheena said: “First you should give your pet as many forms of identification as possible, including an ID tag, microchip and even DNA identification. Pets should also be spayed or neutered to make them less inclined to stray and less attractive to thieves who target them for breeding. You should also secure your home and garden and if you have a side gate, keep it locked at all times. Finally, you should never leave your pet unattended – even in the garden at home.”

Missing Pets Bureau also advises against buying pets from unknown sources like local fairs and newspaper adverts. Instead, it is recommended that you visit your local rescue centre to give a much needed home to a rescue pet.

The pet insurance industry has first hand knowledge of how fast this crime is spreading throughout the country.

Roxi, a Staffordshire Bull Terrier puppy, was hand-reared by the Sampson family from five-weeks-old, but at just twelve weeks she was stolen from her home by thieves masquerading as door-to-door salesmen. They came to the front door selling tea towels as a distraction before making off with the puppy from the back garden, in clear view of on looking neighbours.

“We were all absolutely devastated when Roxi was stolen,” said Nicky Sampson. “We couldn’t eat or sleep the whole time she was gone and the family business suffered. I hope no other owner has to go through what we did.”

How Can The General Public Help in the Fight Against Dog Theft?

They can join the existing volunteer helpers by logging on with www.doglost.co.uk - by checking the site regularly for dogs missing/found in their area, the success rate can be boosted from 70% to 100%! This will take ten minutes, two or three times a week! People who do not own a computer can get access via a library, internet caf?, or even use a friend’s or relative’s computer.

Be vigilant! If a dog suddenly appears in your neighbourhood and you are concerned/suspicious about its origins, contact www.doglost.co.uk – this service is discreet and could give you important information. Get involved with the initiatives published on the website. Write to your MP asking pertinent questions about dog theft. Put posters of missing dogs up in your area.

To achieve these aims we will be talking to as many organisations as possible in order to draw on their expertise, experience and resources. Our first project was to attend CRUFTS in 2005, to ask the dog owning public to help us in our campaign. The Kennel Club press office kindly offered us space in the entrance of the NEC over the four days of the CRUFTS show. We distributed 25,000 leaflets to people from every aspect of the dog world, encouraging them to join us in this vital campaign.

What You Can Do to Take Action Against Dog Theft?

Have your dog micro chipped and tattooed. Both methods are painless and cost around ?9-?35.

All dogs should wear a collar and tag by law. Avoid including the dog's name. Include your home/mobile telephone number/address - use a tracking company’s details if you don't want to include your own.

Have clear photos of the front, rear as well as side profiles of your dog. Make a note of unusual markings.

Train your dog not to go out of your sight on walks. Use an extending lead if the dog does not comply.

Beware of strangers - don't give details about your dog.

Vary your walk times and routes.

NEVER tie your dog up outside a shop.

NEVER leave your dog unattended in a car.

Fit a cow bell to your gate so that you can hear trespassers.

Ensure your fencing is adequate and check it regularly for wear and tear.