They say you can't teach an old dog new tricks, but that doesn't mean he can't teach you. When Catherine Boalch had her first child at the age of 34, she knew nothing. Or so she thought.

I had never changed a diaper, never held a newborn baby - in fact, I don't think I'd ever seen one. I hadn't experienced a sleepless night since college, and the only bottle feeding experience I had involved a baby woodchuck. But it turned out I did know a few things about parenting. Things I learned from my dog.

A hundred pounds of gamboling Golden Retriever, Burt had moved in with me seven years earlier, when I lived alone on the rural north Atlantic coast of the U.S. state of Maine.

The summer after my marriage, he flew cargo to join my husband and I in Paris, where grass was scarce, but where a pair of soulful brown eyes could effortlessly finagle a lamb bone from the butcher or a baguette end from a sympathetic passerby.

At the time of my son's delivery, the protocol for introducing an infant into a one-bedroom apartment already occupied by a demanding dog seemed like just one more challenge to add to an alarmingly long list. It turned out, though, that life with Burt has taught me a lot about life with a little kid. 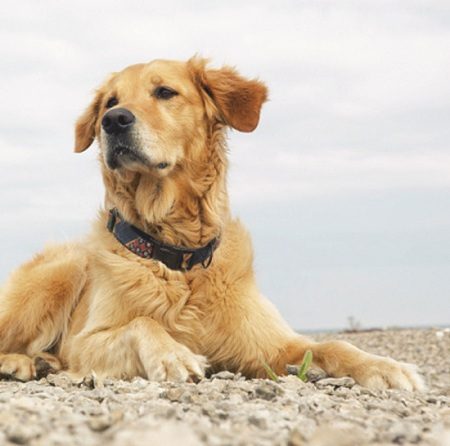 1. Get outside. Go for walks. Kick a ball. Even when it's cold or wet. And you've got work to do.
2. Don't have too much work to do. Make time to roll around on the rug for no good reason.
3. Treats are no substitute for Quality Time.
4. Getting dirty is fun. But not everyone enjoys baths.
5. Cleaning up poop is no big deal. Vomit, on the other hand, will always stink.
6. Shopping is boring. Do it fast. Better yet, do it online.
7. It's perfectly okay to serve the same thing for dinner two nights in a row.
8. When saying no, mean it, and eventually you won't have to keep saying it.
9. When people smile at you, they're not really smiling at you. Smile
back anyway.
10. Feel guilty every time you go out. Go out anyway.

Burt initiated me into the joys of filial affection. When he charged up to greet me with hysterical whimpers of tail-thumping ecstasy, I got a sneak preview of the glow I'd feel when my son took his first stumbling steps into my arms, when he mastered the art of the toddler hug - arms locked around the neck, legs wrapped tight around the waist, the wet kiss planted on the cheek. You can get addicted to that kind of adoration. And what the world at large thinks of you fades into insignificance.

Equally important, owning my dog taught me about responsibility. I worked at daily newspapers, but Burt was the only truly non-negotiable deadline. On the evening of Sept. 11, 2001, I had to explain to my editor in New York City that worst terrorist attack in history or not, my dog was uptown waiting for his walk. I clipped his nails, cleaned his ears, shoved heartworm pills down his throat, and smeared lotion on his anus when a truly unfortunate infection required it. When he needed to pee and I needed to sleep, he won, just as my son wins when he calls out 'Mommy, I'm thirsty' at 3 a.m. Or pretty much anything else.

And when my dog succumbed to illness, I was the one who had to decide it was time to put him down, to haul him up onto the table for the veterinarian to slip the needle into his vein, to feel his last breaths waft damp and cool across my palm as I stroked his whitened muzzle. With my son, I certainly hope such experiences remained confined to my nightmares, but the risk of such anguish is, I know, also part of the experience. I never had so much to love, but that also means I've never had so much to lose.

In the end, we all shared our one-bedroom apartment amicably for nine months. My son suffered his share of slobber, and lost a few cookies when my dog's jaws gently engulfed his chubby fist. But he didn't ever get squashed by an errant paw, and none of his tail-tugging provoked so much as a growl.

And now, three years later, it's my son's turn to learn from his late crumb-catcher. A new baby sister is on the way. Will he model his response on the good-humored resignation with which my dog accepted his infant intrusion into our lives? I'm not holding my breath.

Catherine Boalch wishes to acknowledge Animal Concern Cumbria in lieu of a writer’s fee. You can help support the charity, which is run entirely by volunteers, by calling 01946 692178 or visit www.animalconcernwest.co.uk

What is the most important life lesson your dog has taught you? Let us know - we'd love to hear from you!