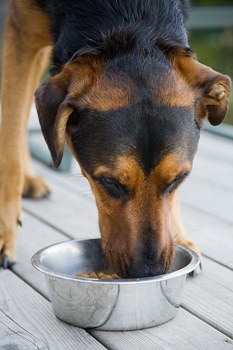 I am very worried about my dog, Karen. She is a 5-year old Golden Retriever and just lately she has simply stopped eating properly.

She has shown absolutely no signs of illness, quiet the opposite she is in fact virtually hyperactive.

I have tried a number of different food, meat, scraps etc.

I’ve even tried taking her food away for a day with no success. She just leaves the food in the bowl, she is not even bothered when I offer her raw meat such as sausages or bacon, occasionally she’ll eat it but usually she just ignores it.

I’ve had her to the vet who says there is nothing medically wrong with her but I’m sure you can appreciate how worrying it is for me and she has lost weight.

Previously I would describe her as a fair eater, not greedy but certainly not as apathetic toward food as she has become recently. Any advice would be welcomed.

A) There are quite a few clues in you letter that scream out to me take this dog back to the vet and insist on a thorough check up including blood tests and thyroid panel, not just a quick medical with a stethoscope.

She is five years old and has only just gone off her food; you state that she was always a fair eater before. But you don’t state how [premiumcontent]

In this article:
2 Comments