She is Lola the wonder dog, a four-year-old German short-haired Pointer and she is on the front line of the UK’s war against illegal immigration.

Lola and handler James Niven are the dynamic duo of the battle with almost 500 immigrants detained thanks to Lola’s super-sensitive nose. The pair, from Flintshire detection dog company Wagtail UK, are one of the top guns of the UK Border Agency’s fight against the human tide of displaced people trying to cross the Channel from France into Britain.

But just two years ago Lola was a family pet at a pub near Preston whose owners decided she had what it takes to be sniffer dog and offered her to Wagtail UK boss Collin Singer.

James, 37, from Bridgend, in South Wales, a former RAF Police dog handler said: “Lola just has a phenomenal nose on her."

“We were checking lorries at Calais and she was 14 lines of lorries away from the truck she was indicating. We checked and it was full of wheelie bins but she was indicating the front right hand corner and inside one of the bins there was a man – she had picked up the scent from over 100 feet away. The most she has ever caught at one time is 17 in a container of dog food – even that didn’t put her off.

Lola is one of two dogs that James uses in the Channel ports where he is based with other Wagtail UK staff and dogs employed by the UK Border Agency. His other dog is Wilson, a Springer Spaniel, whose powers of smell have led to the detection of over 200 illegal immigrants, including one haul of 18 in a single container: James said:

“He’s up to all sorts but you don’t want a docile, quiet dog for this job. You need a dog that will keep going, that will stick to the task, that’s into everything because that’s what they have to do.”

James spent 12 years in the RAF which is where he met Collin Singer and worked with him in Cyprus and he also served in Northern Ireland and Belize before his final posting at RAF St Athan in South Wales. 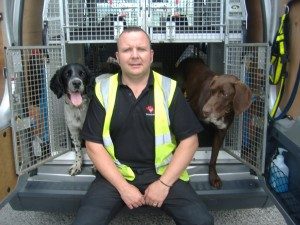 He has now spent two years in Northern France with Wagtail and between them he, Lola and Wison have prevented over 700 illegal immigrants slipping into the UK: “She is approaching 500 detected and Wilson is well over 200."

“She’s a lovely natured dog and Wilson follows everything she does – they’re the best of friends.”

They're one of several Wagtail UK-trained teams working there for the UK Border Agency and Managing Director Collin Singer said: “James and Lola are a brilliant team and have done so well for us but as a company we are proud of all the staff we have working in the Channel ports and our UK staff who provide the training and support for our teams in France."

“Our staff are mainly recruited from a military background, utilising experience gained in Afghanistan, Iraq, the Balkans and Northern Ireland. We also train explosive detection dogs for use at airports or other areas of concern such as seaports and rail terminals. We have clients in mainland Europe, Africa, The Middle East, North America and the Far East.

Specific clients can’t be mentioned due to customer confidentiality but we have recently provided search dog teams at high-profile locations in London, also sporting events, international air shows, seminars, conferences and exhibitions. In addition, we have also provided a service for royal visits, other VIP visits, schools, colleges, factories and off-shore facilities on gas and oil platforms.

We are approved by the Ministry of Defence to deliver search dog handler courses and we were the first private company to provide detection dogs at the construction site of the 2012 London Olympic Games.

Even in the present technological society, dogs remain the most reliable and consistent method of detecting a scent, whether it be a person hiding in vehicle, an illegal substance such as drugs or the detection of firearms or explosives.”