In my home ever day starts pretty much the same. We run to a schedule and I blame Chloe mostly for this. She was incredibly routine orientated, more so as she got older, and to an extent Mia has since taken over the role - although she hasn't cottoned onto the clock change yet. Chloe for all her dear qualities had a scam running I'm sure, which meant she felt whenever the clocks went forward she was entitled to her tea an hour earlier also, and stuck steadfastly to this decision, whether they moved back or forward again, she set her tummy timer to the earliest time and refused to move.

Mia is routine orientated to an extent where her clock is set to 'awake. now. breakfast. now' and the boys have fast followed in her footsteps and so once our day begins so does the to-do task list, says Kim O'Meara.

It begins with garden trip, breakfast, cleaning up after breakfast, making tomorrow's dog food, feeding the cat (indoor) and not-quite member of the gang, outdoor cat who has taken up residence in the garden, but wishes to have no contact whatsoever with people. I try not to be insulted by this five months on.

As the morning chores evaporate the to-do list, however, gets longer and I'm certain I'm not alone in this. Working out how and when to fit in other necessary chores, with a full-time job calling me to get a move on, has been a constant battle and so when I was given the chance to review a robot vacuum cleaner I jumped at the chance. 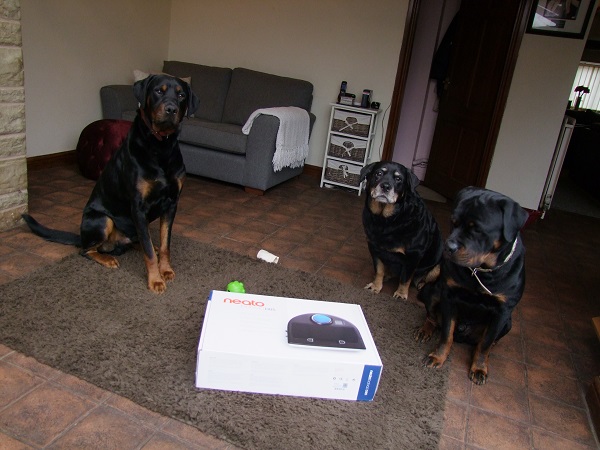 The Neato D 85 robot vacuum cleaner arrived in a tidy little box, not incredibly heavy and I was instructed to switch it on and let it fully charge before testing. After reading very positive reviews online about this device, most especially the one from Top 9 Rated, we were certain that one day we'll have one at home. This was like seeing presents at Christmas and having to contain yourself until Boxing Day to open, but I did it. I am an adult after all, so I told myself although the fact this cleaner has 4.5 stars out of 5 on Amazon meant I was eager to test for myself and see where opinion fell and if it really is as the company describes and 'Smart, time-saving and powerful.' Retailing at around £420, you can find some retailers offering for less and some slightly higher. 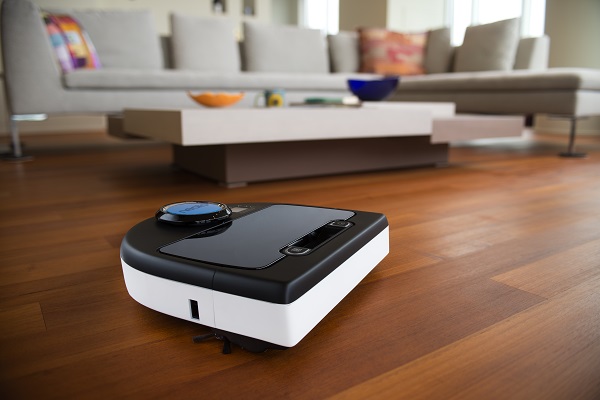 The Botvac D85 is of course wireless, but its charging unit is not, so once I put my excited head on hold and worked out how the unit worked and what went where (admittedly this took me a little while, even with instructions), I found a place it could call home where the unit could stand up against the wall while the grill at the front of the vacuum could press against the necessary charging dock area and we were off. Or almost. We'd begun the process and soon we would be.

Alongside the cleaner came a host of accessories which allowed me to prepare and block off certain areas if needed, meaning the cleaner would know to avoid.

The cleaner works in a way which shows how clever the technology behind it really is.

It switches on with the press of a 'Home' button and you press the same button again to set it to 'cleaning home'. At this point it spins around, assessing its area and working out perimeters of where to go and what to do. 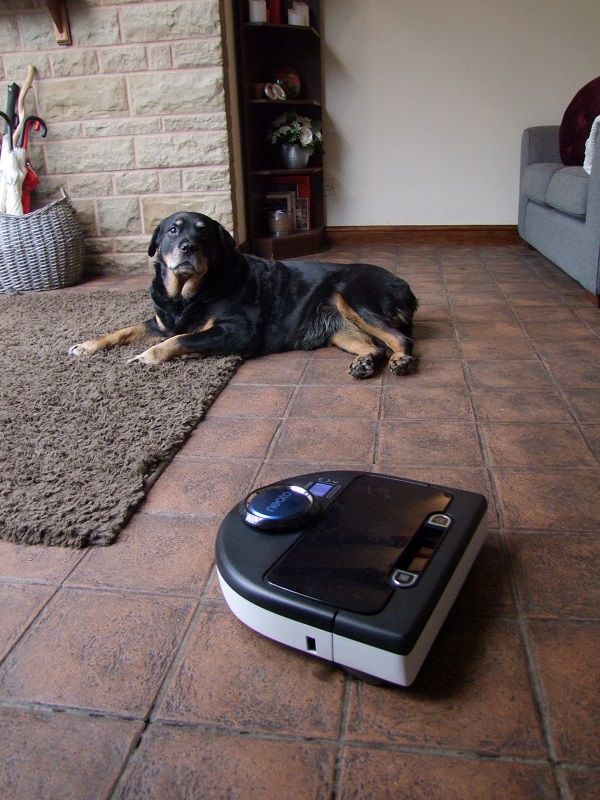 The 'Home' button allows you to pause the cleaning process if needed and you then use the small screen on the top right-hand side and arrows alongside to resume or cancel.

This works because the cleaner's technology is based on the same laser scanner and navigation technology as used by the Google self-driving car, Neato’s patented Botvision technology ensures that the robot creates a detailed and accurate map of the area to be cleaned. It then cleans in an organised back and forth pattern – rather than bumping around the room like other robots.

Neato robot vacuums are also so clever that they know when to go back to their base to re-charge and then return to the spot where they left off to finish the cleaning job (this never ceases to amuse me) and unsurprisingly, no other robot vacuum has this intelligence. If you choose, you can also set it to a timer, meaning your vacuuming could be complete (at least either downstairs or upstairs, stairs aside of course) before you even get up!

Equally, I could imagine it would as beneficial to pet owners who had a school run to complete and they could set the Neato D 85 to work before leaving the house knowing when they returned it would be finished and the time their own, or to spend with their family instead of planning how to incorporate housework tasks into the day. 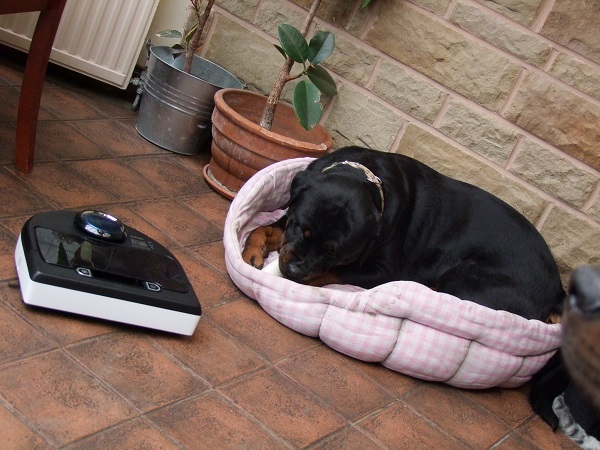 Surprisingly quiet, it moves from hard floor to carpet with ease.  The Neato Botvac brush is also 50% larger than those found on other robots, making it the largest brush available on any robot vacuum. Designed to hug walls for maximum cleaning power, it cleans within 10 millimeters (0.4”) of the wall and even includes a side brush to pick up every speck of dust.

After its first outing, it also attracted little attention from Mia, Chris and Danny, who paid little heed to it as it moved through the house. Again, a big relief as it meant I knew I could set it to work while I carried on working elsewhere without the worry that it would be at the centre of extra attention from the three bears. 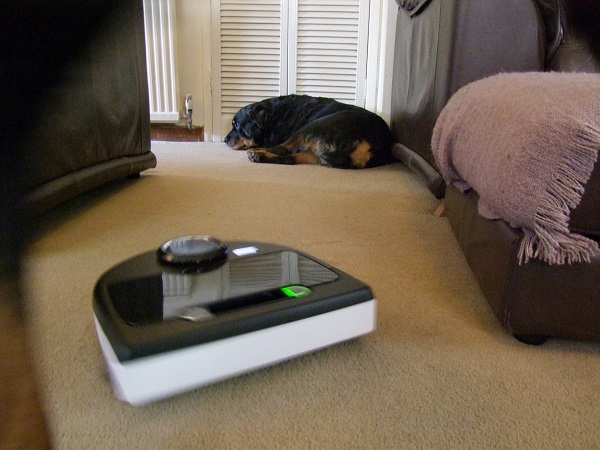 Without a shadow of a doubt, this vacuum makes my life easier and lives up to all expectations about time saving.

If I have two jobs to do, I can set the Neato D 85 off downstairs while I carry on with my second job - I'd say it's cut my regular weekend cleaning from top to bottom down by about half  if I then take it from room to room with me while I polish and it vacuums. To me, this is huge if you work five days and only have two free and one of which consists of about five hours of cleaning.

It picks up pet hair and dust easily and incredibly well. These photos below show a before and after of my poor cream carpets which do take the brunt of three black-coated dogs and a cat and so any cleaner I use has to be good at picking up stubborn hairs. 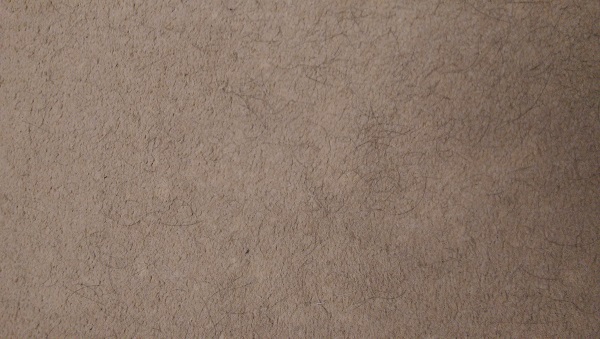 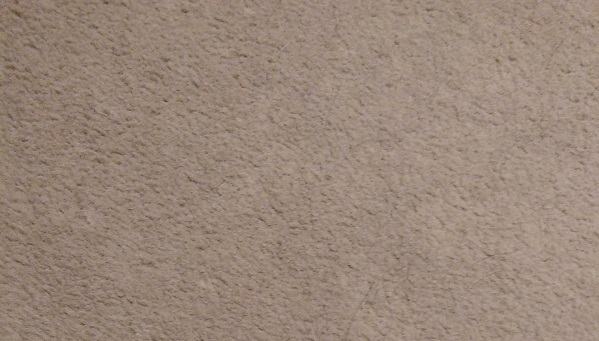 The photos speak for themselves about performance, I think you'll agree. 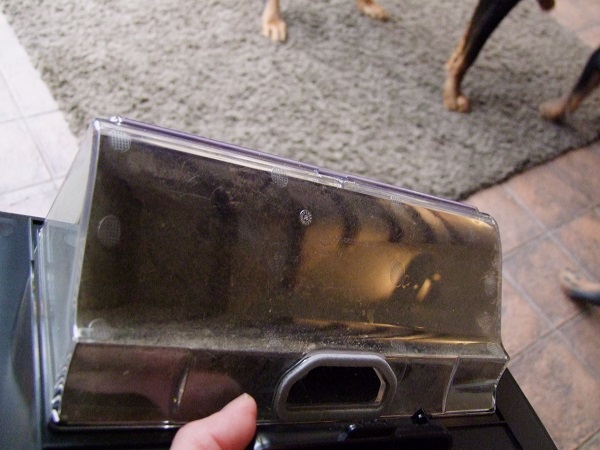 A full bin packed with hairs, dust and dander - easy to empty, just lift out, empty and tap to remove excess hairs from the filter before replacing keeping the Neato D 85 happy, as beeps to ask you to put it back once removed

The cleaner itself has no negatives, in my opinion so far. Although I would have liked a visual in the manual showing how the charging unit sat and at what end or how the cleaner then charged against it. It could just be me, but I admit that it took me a while to work out how it sat up against while checking and double checking I hadn't missed something else more technical. It does look very simple when put together though, so this was perhaps just me and if so, shouldn't count against this little wonder. 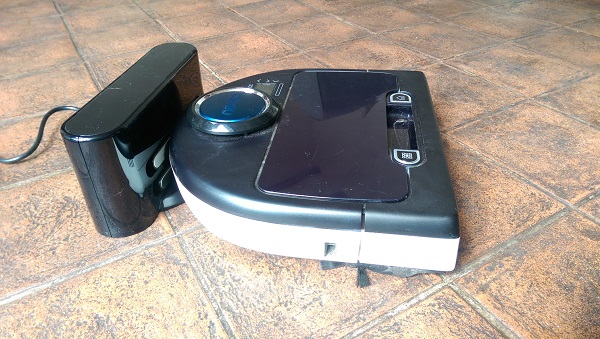 I've been testing and using daily for a little over a month and so far there has been no drop off, however at around £420 it isn't cheap. It does have the technology which I think reinforces the price point  but still, it is a large sum, however if you search around you can find retailers with special offers meaning it's very similarly priced to other leading brands with cleaners aimed at pet households and you may find, like I have, that the price point is equated in your mind to time saved.

This really has been a unique testing experience for me and without exaggeration, life-changing because it truly has saved me time and gives peace of mind that it's a job done which I don't need to cram in at another point in time and I know that all of the hairs, dust and dander my carpets and floors have to handle on a daily basis has been cleaned because this cleaner really does do a marvellous job. 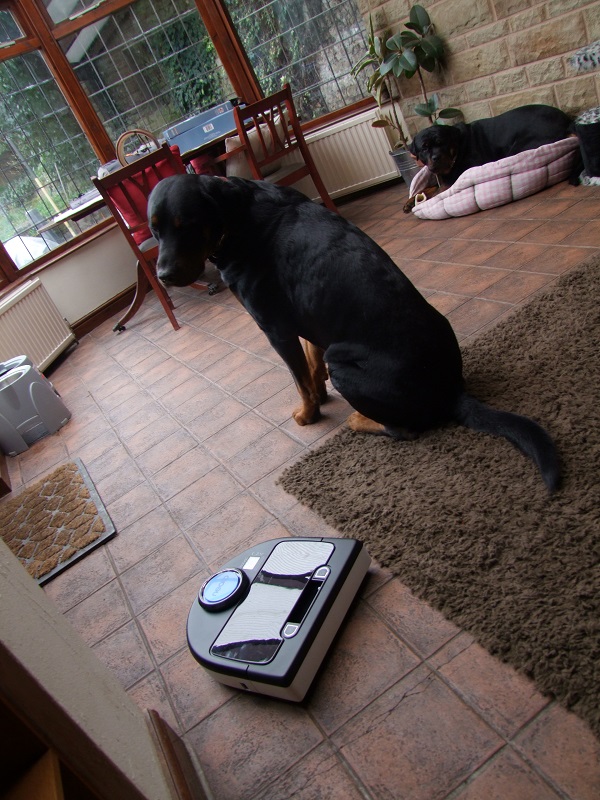 Before the Botvac D85 arrived, I joked with my husband that it would probably have done more housework in a week than he has in 10 years. He was a little affronted, but it's true and he couldn't deny it has now done more vacuuming than he has (sorry Ryan).

As with everything in my life, we have a routine the Botvac D 85 and I.

I finish making the dogs breakfast for the next day, have a cuppa and set the Botvac D85 off to vacuum downstairs while I clean upstairs or begin work. It takes around 50-60 minutes, give or take, to vacuum downstairs and when finished, the Botvac D 85 beeps signalling it has to be recharged before use upstairs. The battery life I've found is comparable or better to other larger, cordless units (for example the Gtech AirRam K9 lasts 40 minutes) so I was pleasantly surprised after not knowing what to expect and Neato say the battery will last for around 6 months before it should be replaced, with the vacuum cleaner itself having a 1 year warranty. 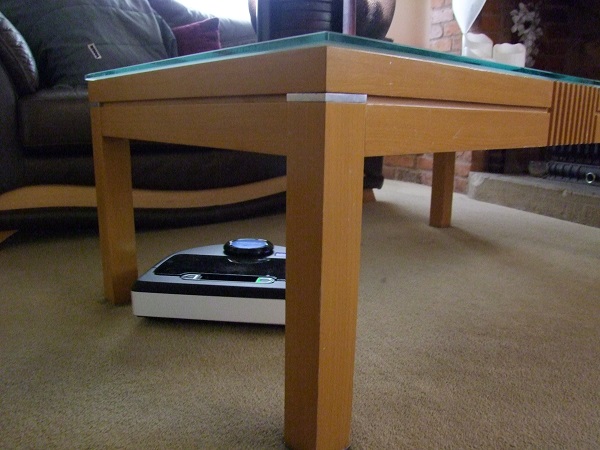 I haven't dared yet sit down with a morning cup of tea while the Botvac D 85 works around me, it would feel rude, is that strange?

After some initial interest, our dogs gave the little robot vacuum no attention (except for Christopher keeping an eye on his toys and making sure they wouldn't be stolen), which in itself could be a worry for pet owners - but in my experience, it really wasn't an issue as the video shows.

If you are considering investing in one, search around and find it at a price you're happy with because with everything, cost is a consideration. 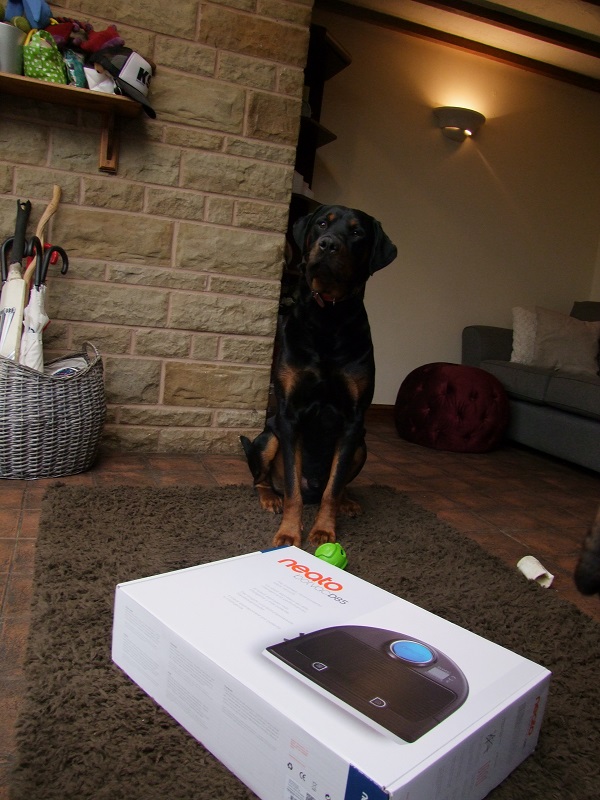 This is the first and only robot vacuum cleaner I have reviewed and I have to say, it would take some beating. The performance equals or betters even the best of cordless or corded cleaners I've tried over the years.

We've joked about naming the little Neato robot vacuum cleaner, but all joking aside, it has become part of the family and one I really couldn't do without. If you have any name suggestions, comment below and let me know.

Find out more about the Neato D 85 online here: www.neatorobotics.com and you can read more reviews on Amazon here: www.amazon.co.uk 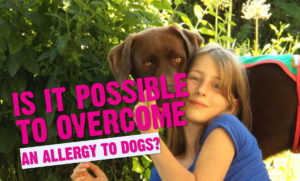 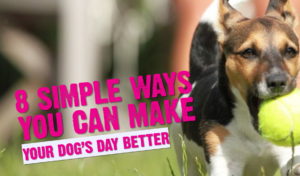