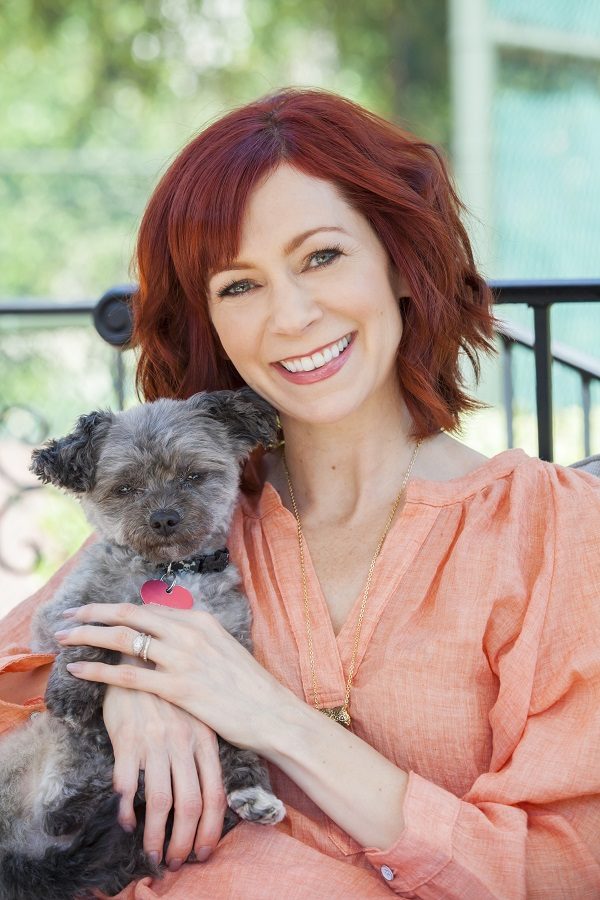 Carrie Preston is an American actress who has established herself on stage and screen both in front of and behind the camera.

Having starred in movies such as 'My Best Friend's Wedding' and 'Duplicity', she is perhaps best known for playing Arlene Fowler for seven seasons on the hit TV show 'True Blood'.

Most recently, Carrie has appeared on British screens alongside Steve Coogan on Sky Atlantic's 'Happyish' and playing everyone's favourite quirky lawyer Elsbeth Tascioni in 'The Good Wife', which earned her the Primetime Emmy Award for Outstanding Guest Actress in a Drama Series.

After recently saying goodbye to 'The Good Wife', Kim O'Meara caught up with Carrie to hear her thoughts on saying goodbye to her character on the show and find out more about her favourite man on four legs, her dog Chumley, who has incidentally just made his TV debut alongside Carrie and her actor husband, Michael Emerson, on the hit TV show 'Person of Interest'!

Chumley is a rescue, but we think he is a Poodle Maltese mix. I saw a picture of him that the rescue organisation (A Dog’s Life Rescue) posted online, and I just knew he was the one for me. He was the only dog I called about. It was like he reached out to me from the ether.

My husband Michael and I picked the name way before we even picked the dog. We used to enjoy Chumley’s, a famous former speak-easy at 86 Bank Street in NYC's West Village. It is gone now, sadly; but historically, it was a haven for poets like E.E. Cummings, novelists like Willa Cather and William Faulkner, and playwrights like Eugene O’Neill.

We would go with my great-uncle, who was a musician and composer and served as personal assistant to the great American composer Aaron Copeland. So it held a special meaning for us, and we always thought it would make a great name for a dog!

We just had to find the pup to fit the name, which we feel certain we did. Chumley is a serious little guy. He is generally peaceful, taking all things in stride except doorbells! He is super snuggly and is very tolerant of Mama’s smothering kisses.

How long how long have you been a pet owner?

Growing up, my family had a lot of different types of pets. Throughout the years, we had cats, gerbils, fish, hamsters, snakes, rats, mice, lizards. My favourite cat was named Kitty, a Japanese calico bobtail. She and I had a special bond. She loved sitting in the rocking chair with me, which was unusual for a cat.

But we only had one genius of a dog, and her name was Tessie. She was a mixed breed; probably Havanese/Poodle/Shepherd mix. We got her as a puppy, and my siblings and I doted on her. We trained her to do the regular tricks like sitting and shaking. She was loyal and sweet and obedient. Such a good dog. She died of natural causes when I was away at college and I did not have a pet again until Chumley, who we got 6 years ago. In a way, Chumley is like a tiny version of Tessie.

After earning a Bachelor of Fine Arts degree at University, you gained an acting diploma from the prestigious Juilliard School's Drama Division. I read that from the age of 12 you had already established the path you'd follow, who inspired you to follow your dreams into acting?

My mother is a visual artist and an art therapist, and she instilled in me a deep interest and appreciation for the arts. She taught me that following your own passion is the key to finding happiness in your life.

She never discouraged me when I asked her if I could be a professional actor. In fact, she said 'Well, honey, somebody's got to do it. I do not know why it cannot be you!'.

You've played some fantastic characters over the years in films, TV and stage where your career began. From Arlene Fowler Bellefleur in the fantastic 'True Blood' to your recurring role as Elsbeth Tascioni in 'The Good Wife', your characters always seem to have something about them that grabs you as a viewer.

Who's been your favourite to play? And of course, who do you think has a similar personality, or elements of you, in them?

I really loved playing Elsbeth on The Good Wife. I loved the nimbleness of her mind. There were so many things going on inside of her, and yet each thought got equal time and attention in her mind. She would seem all over the place, but then she would zero in on something and nail it. It was like her brain worked way faster than her body, so I came at her from that angle.

It was a delicious and refreshing role to play. I guess my mind can juggle a lot of things, but Elsbeth's mind is definitely more mercurial than mine. She also does not seem to have much of an edit button, and I definitely try not to share every thought I'm having.

There has been some research out in the UK recently which talks about the role our pets play at home and the impact they can have on our emotions, keeping us sane on those stressful days, for example. In your job, you must have a lot of long or heavy days. How does Chumley help you?

Chumley keeps me centered and calm. I sometimes bring him to sets with me, and he is a wonderful touchstone between set-ups. He gets four walks a day, and I like having that kind of a routine. When we are both at home, Michael and I split the walks. I do morning and supper. He does mid-day and the last walk before bed. When I am out on walks with Chumley, it is very meditative. It gets me out of my head and into the present moment. When I am at home, he is a supreme snuggler and that, above all, melts all the stress away.

We have a few thought fun but provoking questions here...

Do you have a motto that you live your life by? What would you say Chumley's motto might be?

My motto is 'If you believe it, you can achieve it' and I think Chumley’s would be 'Eat. Play. Love.'

If you were to swap roles with Chumley for a day, how do you think he'd cope being you and what would you love most about being him?

Nearly every day I will say out loud, 'I wish I was Chumley'. He is so relaxed and centered, even when he Is keyed up and excited. I could use a big dose of that in my hectic life. I would love being that present and in the moment.

I spend a lot of time thinking about the future, and if I was Chumley for a day, I would probably have the key to enlightenment.

If Chumley was me for a day, he would not like having all that grooming in the morning and would be scared about all the driving. But he would love all the snacks at the craft service table on set.

For this question, we ask our celebs to match up the following people’s personality to a breed of dog, for example, Winston Churchill = Bulldog.

If the following celebrities were breeds of dogs, based on their personalities alone, what type of breed do you think they'd be...

Cush Jumbo (fellow dog lover who also starred in 'The Good Wife') – I think she would be an Airedale Terrier.

Michael Emerson (Carrie's husband, perhaps best known for his roles in 'Lost' and 'Person of Interest') – I think he would be an American Foxhound.

Brigitte Bardot – I think she would be a Lhasa Apso.

Donald Trump – I think he would be a Chow Chow.

Now, onto our quick fire questions...

Big dogs or little dogs – For me, little dogs because they are portable and you can hold them like a kid.

Pedigree dogs or cross-breed – I think cross-breed. You get the best of all those involved

Quickest or shortest route to a destination – Shortest route. I do not like to speed. Unless I am on foot. Then I take the quickest. Michael calls me 'Speedy Boots' (laughs).

Days off or days at work – Days at work. I am happiest when I am working.

Describe the last time you laughed out loud because of something you saw Chumley or another dog do.

I laughed at Chumley just yesterday when I could not find him in the house and went into my closet, where he was nesting on the clothes I had just packed in my suitcase. He looked so adorable that I just burst out laughing.

If you could arrange a dinner party inviting three people (choosing from any era, past or present), who would you choose to invite?

I would invite Dorothy Parker, Jane Austin and Pema Chodron.

If you could go back in time and play any character in any film, who would you choose to play and why?

I think I'd choose 'Sybil' because it would be a thrill and an awesome challenge to play so many personalities within one person.

What three items do you never leave home without?

TV show – 'Transparent'.
Book – 'I'm Glad About You' by Theresa Rebeck.
Film – 'Youth'.
Finish the following sentence, my dog is...one of the greatest joys of my life.

And finally, this is always a tough question and often requires a fair degree of thinking time but….if Chumley had the ability to speak and answer one question and one question only, what would you ask him and what do you think that he would say?

WATCH: Does Your Dog Know Who His Best Friend Is?

Meet Benji. His owner decided to test him and ask him to identify his best friend with adorable consequences. We won't say any more,...

Talking Point: I Wanna Be Your Dog - a Rock 'N' Roll Approach to Rescue Book Club: Arthur - The Story of One Man...

A Dog Owner’s Review: How Much Do You Know About Robot Vacuum Cleaners?

In my home ever day starts pretty much the same. We run to a schedule and I blame Chloe mostly for this. She was...