Authority ~ “the power or right to give orders or make decisions”

Ask a Northern Inuit how much authority they assign to their team of sled dogs when navigating some of the most barren, hostile terrain on the planet. Or question the handler of a bomb detection dog on whether they have assigned authority to the Springer Spaniel as they strive to uncover hidden explosives. Millions of us assign authority to our dogs to keep watch over our home as we sleep. It's an implicit trust.

We give over to our dogs the power or right to make decisions – very often decisions in our best interests – without thinking too much about it. Let's be entirely up front about this, not too many people are able to sleep soundly at night on the basis that their cat, one of the most successful predatory animals known to man, will put its own life on the line in the protection of ours.

But in our dogs, Ryan O'Meara says, we trust. 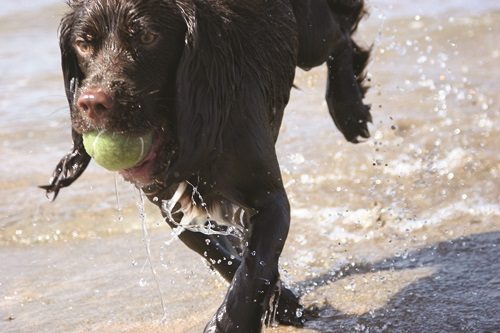 Humans still, even thousands years after their first domestication, need to place massive amounts of trust in dogs. These dogs, be they serving on the front line or protecting their owner/handler from enemies who want to kill them are no different to our pet dogs either physically or mentally.

One of the more infuriating traits I often observe when out walking my dogs is the owners who nag, nag, nag at their pets. ''No. Stop it. Come. Stay. Don't do that. Stop it. Over here. Turn around." etc. etc. Owners who nag away at their dogs are missing a huge relationship bond. Our dogs are clever. They understand, if properly taught, commands on a pretty vast scale. However, that scale does not extend to 20 variants of the same request. Stop. No. Come. Heel. Sit. Stay. All perfectly learn able by most dogs.

We can all be guilty of chatting too much to our dogs when we actually want/need them to do something. White noise is the enemy of clarity in dog training. So how about we try and experiment. Next time you take your dog for a walk try issuing just TWO commands.
The 'sit' and the 'recall'. Here's how the walk will go...

1. Put the lead on. Don't say anything.
2. Walk the dog to your usual exercise spot. Don't say anything. If they pull on the lead, then stop and use 'sit'.
3. Let the dog play, run or whatever they would normally do once you reach the exercise spot. Say nothing.
4. Once you're ready, use the recall command. If the dog doesn't respond, don't 'chat' to them. Simply begin walking away from the dog. If they still don't come back, issue the recall command and then run in the opposite direction. Whatever you do, don't repeat the command twice without taking some sort of affirmative action.
5. When the dog comes back, reward heavily by stroking.

Can you do it? Can you go through an entire dog walk, including off lead exercise and only use two commands...the 'sit' and the 'recall'? If and when you can, you'll immediately be in the very top echelons of dog owners.

Placing trust in your dog to do as they're asked, even though your life doesn't depend on it. Now that's a high standard to aim for!

Has your trust in your dog ever helped you? Tell us your own stories - we'd love to hear from you!