It’s not easy finding love in the 21st century, thanks to hectic work schedules and lack of sleep, writes Ellie Akhgar. Finishing your day at five and popping off to a bar in the hope that you will meet your future partner may even seem a bit of a chore. This is a common scenario: you notice someone that attracted to, but either cannot pluck up the courage to approach her/him, or even when you do, you realize that you have nothing in common and are left with an urge to escape from the whole deflating experience. So, how about putting your dating troubles into the reliable paws of your pooch? 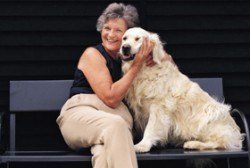 June McNicholas, a health psychologist from Warwick University, suggests that walking your dog may increase your chances of getting a date or being “chatted up” by up to 1000%. After a number of trials held in the West Midlands, her research has shown that at least 40% of dog owners found it easy to make friends and meet new people just by having their own dog. Speaking to The Telegraph, June McNicholas concluded, “People often find it difficult to break the ice with a stranger and the dog is a perfect way to start a conversation.”

Owning a dog may suggest to the opposite sex that you are a caring individual who is capable of taking on responsibility, while walking your pet also shows a degree of loyalty, a commitment to routine and a sense of playfulness. Women may find men who own dogs appealing on the grounds that they are sensitive, dedicated and caring enough to keep an animal. Dog walkers find it easier to get to know each other based on the fact that they share some common ground. Many conversations can begin just by talking to each other about your dogs and this may then spiral into other topics.

Lucy Davies, a care worker from South Manchester, met her partner, James Dooley, while walking her Border Collie in the local park. “We met one morning in December just over two years ago while I was talking Murray for his early morning walk. James was walking his beautiful Labrador, Basil. I had seen them out together before, but on this occasion Murray had run across to play with Basil and that is when our eyes met. After that, we arranged to meet up and walk our dogs together which gave us the chance to get to know one another and really talk to each other. People laugh when we tell them that we met and fell in love when we were walking the dogs. I suppose it is because it is a novel way to meet someone. I mean, meeting in the park is not really like meeting in a night club is it? I’ve never been happier and I have Murray to thank for that.” Lucy and James now live together with Basil and Murray and hope to get married in summer.

There is even proof that relationships formed from dog walking can last. Jill Bricknell from Sheffield met her husband Tony 26 years ago when she was out walking her King Charles, Sandy. “I just remember that we used to walk our dogs at almost the same time every evening. We were quite young at the time and our dogs were family pets. After a couple of months we started chatting about the dogs. Tony had a West Highland Terrier at the time, which I liked because I had wanted one myself, so that became an area of conversation. As we got to know each other we arranged to go out on a couple of dates and 26 years down the line we are still happily married and have two beautiful daughters.” Sadly, Jill’s King Charles Sandy and Tony’s Highland, Mush, passed away, but now the family share another West Highland Terrier called Jacky Boy.

So, could finding dates with a little help from your dog become a trend? Toronto born Bruce McCulloch became so interested with the concept of finding love with the help of one’s pet, that he used the idea as the basis of his first directional piece. His film, ‘Dog Park’, was shot in Toronto in the popular dog walking area, Trinity Bellswood Park.

Even celebrities are finding dog walking to be an effective solution to finding a partner. Television presenter Davina McCall met her husband Matthew Robinson while she was walking her dog.