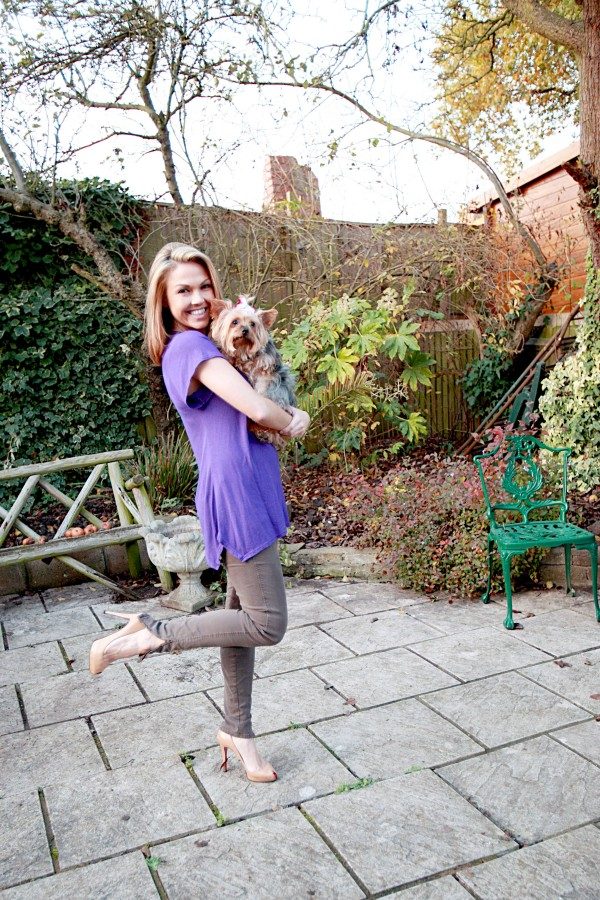 Adele Silva is best known for playing Kelly Windsor in Emmerdale. Having been acting since she was a young girl, Adele has had roles in Doctor Who, The Bill, Eastenders and more recently The Real Hustle.

Adele spoke to Kim O'Meara about returning to Emmerdale, her latest film, Strippers vs Werewolves and the two loves of her life, Buster and Misty.

I have two dogs, Buster and Misty. They're like little and large! Buster is an 8 year old Yorkshire Terrier girl. We've always had Yorkies in our family, we've had four over the years but Buster was the first we've bought. She's a funny girl really, very lovable and she snorts all the time – she has a small windpipe so she's always making funny noises. She has the nicest temperament, people love her and she is so funny, sometimes when she gets over excited she'll wee a little. But she has a lot of health problems sadly so she's at the vets every two-three months.

Out of the two, Buster is the character. When anyone comes to the house she'll paw at their legs for fuss. She loves any attention!

Misty is 8 years old aswell and she's a Shar Pei. She's the complete opposite to Buster. She's very stand-off ish. I bought her with an ex-boyfriend of mine. When we got her I'd never had a big dog before, I'd always been used to small dogs. So we went through The Kennel Club route and found a breeder. Misty's very aloof, she's quiet and sticks to one person to the point she'll sit outside the bathroom waiting for them. She's a lovely girl, she has a great temperament. One memory sticks out in my mind when she got excited when getting ready to go for a walk, she screwed her face up, it went overly wrinkly and she was wiggling her bum around, it was so cute to see.

She's fiercely protective over the little one, Buster, aswell. If people come round to see us she'll sit and spectate for 5-10 minutes taking it all in, wheras Buster's all over everyone from the start happy for fuss and attention.

I think Misty's personality is just typical of her breed though. I have a friend who has a Shar Pei aswell and she said her dog is just the same.

When I go back home with them Misty is my dad's best friend, she sticks to him like glue – but I have a feeling that's because he's always eating and she knows if she stays around by him she'll get something to eat.

We got our first Yorkie, Goldie, on my 6th birthday. Then we had Dinky, her daughter and then Katie. By the time Katie was with us Goldie had passed away and Misty was home with me.

I think I really benefited growing up with our dogs over the years, my mum has always been really pro-animals. They were great family pets and being Yorkies and small dogs, good for travelling and good with kids.

You've probably best known on-screen for playing Kelly Windsor in Emmerdale on and off since 1993. What do you love most about Kelly and do you see her making a come back any time soon?

Well, Kelly couldn't be any more from me so when I first read about her in 30 seconds/1 minute I thought 'I really don't like her', she's so sly, a bit of a bitch and has no living parents but she has so many dimensions. In her most recent time back, I got a call and they told me a little about her plans for coming back with a kid, how she would shake things up with Jimmy and Nicola and they asked if I'd like to come back for a few months.

I started acting when I was 8 years old so I have a theatre background. I spent a lot of good years at Emmerdale and I enjoy playing Kelly, she always had great storylines. I get itchy feet and so that's why I took a break to try other things. At the moment I have no real ties apart from my dogs. I'm not married, I don't have kids and there's other things I'd still like to try so I can always look back and say 'well at least I tried'.

I think Kelly's a 'love to hate' character. I'm really open minded on it so I never say never. Emmerdale's always a fun place to be with a cast and crew I grew up with so it really feels like going home whenever I go back.

In your down time from Emmerdale you've appeared on lots of TV shows and films. Most memorably ITV's Hell's Kitchen where you came 2nd, what did you most enjoy about Hell's Kitchen? Would it encourage you to do more reality TV where there was something to learn from it?

[premiumcontent]And finally, this is always a tough question and often requires a fair degree of thinking time but….If Misty and Buster had the ability to speak and answer one question and one question only, what would you ask them and what do you think that they would say?

I think I'd ask Buster 'do you understand why me and my mum are saying?' and she'd say 'yes'.

And I think I could ask Misty anything and she'd say 'whatever'!

Aristopaws.com – for the soft dog toys

Hair of the Dog – for the grey Angora knit ‘Love’ jumper

Happy Dog UK – for their tasty treats featured here – NaturCroq which is easily digestible and The Fit and Well Happy Dog Snack with Power Alga Spirulina.  It contains 30% high-value protein in only 9% fat.  The super Premium Snack with vitalising  L-Carnitin and the original New Zealand Mussel based on the unique Happy Dog Life plus Concept® and made out of natural ingredients.  Choose Happy Dog UK to give your dog the best.

UrbanPup.com – for their new dog perfume

Wuff in Style – for the pink duffle

And last but not least, Sharah Smith Photography