The pearl of thunder terrified her. Coping with the pain of dog loss has never been easy. Even after twelve years of living through it.

The jaunty temperament of indifference that she had honed over the years was shattered at the first whiff of an impending storm, replaced by visceral panic and dread that manifested in frenzied eyes and trembling torso.

And although her mother lovingly tried to soothe and calm her – sometimes an entire night’s effort – she was inconsolable.

Alice was an old Chocolate Lab that was blind, suffered from arthritis, and was diabetic. But despite her ailments, she was a happy dog.

She was also a very lucky dog having been adopted as a puppy by a person who was ready and able to offer up the unconditional love and nurture that only a mother can dispense.

Her mother’s commitment to providing Alice a good life was unflappable.

Even when the logistical challenges of dealing with diabetes – insulin shots twice a day, testing urine for sugar, regulating a special needs diet – were impacting other aspects of her life, Alice’s mother never begrudged or complained.

On the contrary, she was grateful for anything that prolonged or improved Alice’s quality of life, regardless of the inconvenience. She was rewarded with a carefree dog that tolerated needles to the neck and drops to eyes confident that the hands that administered them would never hurt her.

Then she’d do her stretch-to-nap-don’t-bug-me routine, safe in the comfort of her loving home. 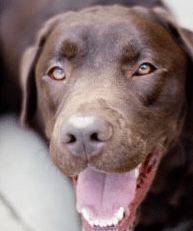 Alice’s mother was five hundred miles away, in New England, when I took Alice to the emergency room.

After some rudimentary tests, the emergency room vet (and other colleagues that she contacted on-line) felt fairly certain that Alice had bone cancer and that it was spreading to other parts of her body.

But she couldn’t be sure without running more specific tests; tests that would be more intrusive, adding to Alice’s increasing anxiety.

Facing the difficult decision that every pet owner dreads is fraught with uncertainty. It’s worse when the only tangible diagnosis is speculative rather than definite.

By the time Alice’s mother arrived at the emergency room after an arduous road trip across seven states, Alice’s condition had worsened; her discomfort and anxiety were palpable. She was shaking badly and clearly panicked as she tried to stand but couldn’t.

Still, she greeted her mother with her paw, swatting her like she had done so many times through so many terrorizing thunderstorms, imploring her to make it stop. But this night the skies were quiet, and Alice’s mother knew what she had to do.

Where we provide for and care for our children in the hope that someday they will thrive independent of us, we do the same for our pets knowing that they will always be as dependent as the newborn.

They are our forever children. And when they are gone, coping with the death of a dog is compounded by the void in our schedule; no walks or shots or meals. They no longer need us and it hurts.

Although presently Alice’s mother is feeling the hollowness of grieving a loved one’s death, her life, as well as mine, is much richer because of Alice.

She and I worked at keeping Alice alive and happy in the last couple of years and we were amply rewarded for our efforts in many ways, but mostly just with her presence.

We were lucky to have her, love her, and be loved in kind. And Alice’s mother was lucky she got to feel Alice’s paw swatting at her for the last time as she told her how she loved her, over and over, even though Alice already knew that.

Read more about how to provide the best care for an older dog.