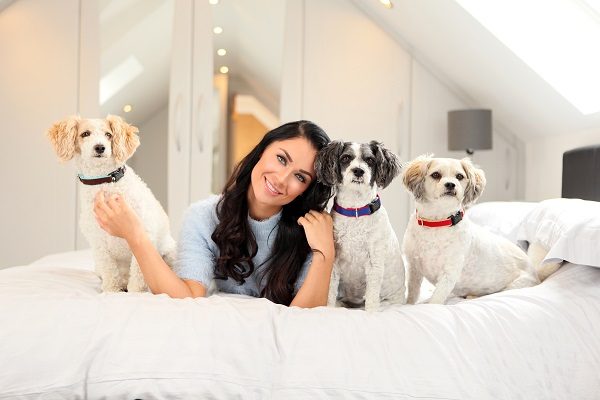 Cally Jane Beech hit our screens for the revival of ITV's dating reality show, 'Love Island', last year which saw the former dental nurse meet up with Luis Morrison, who she had previously dated before meeting again on the island.

We first introduced Cally and her three family dogs, Busta, Murphy and Alfie earlier this Summer in an exclusive interview on K9Magazine.com.

With exciting career moves ahead in music and fashion, Kim O'Meara caught up with the former Miss Great Britain to hear more about her three family dogs and learn why she is using her voice to speak out for animals in need.

Hi Cally! Thanks so much for making the time to speak with us again today. This issue you are taking our cover with one of your family dogs, Alfie, and we're really looking forward to hearing more about him and your two other dogs, Murphy and Busta.

Yes, Alfie is our sensitive boy wearing the maroon collar. He's also the youngest of our three dogs at 2 years old. Busta is the oldest and he's 10. You can actually see a little bit of his ear on the cover (laughs).

Murphy is our third dog, he's 6 years old and a quirky little character. He's wearing the red collar and you can see his front teeth sticking out.

We've had them all from puppies and they are all Bichon-Frise, Shih Tzu cross Poodles.

When we last spoke you told us all about how you came to own them and how alongside your brother, you and your mum convinced your dad to let you get a dog and you've never looked back.

How are the boys?

Do you think their first magazine shoot and cover will change them?

(Laughs) No, they're pretty down to earth. They like being at home and surrounded by family. They're all about their daily routine, being at home going out for walks and sleeping in their comfy beds. Busta, particularly.

All Photos By: Vivienne Edge Photography

I know you were glued to the latest series of 'Love Island' which Cara De La Hoyde and Nathan Massey won. Do you think the right couple were crowned winners?

Yes, I do. It was nice that the couple who won had been together the whole way through, like it was in our series with Max (Morley) and Jess (Hayes) winning.

When we last spoke you told us all about Busta, Alfie and Murphy's character traits so we wanted to delve a little deeper with some fun questions.

You've had a varied career so far combining modelling with reality TV. You've also been a dental nurse and recently announced some exciting news which will see you launch into the fashion world with your own shoe collection and have a move into music on the horizon. If your boys had careers, what do you think they'd excel at?

You don't always know where he is but you know he's always watching you. Sometimes he'll just crop up from nowhere and you'll be like 'where have you been?', so yes I think he'd be an investigator.

I think that Busta would probably be a retired little man because he loves to sleep and I think Murphy would be a restaurant critic, he would love going to different restaurants and tasting little bits of food. He loves to try a little bit of anything you're eating, but before he eats it he'll sniff it first.

How would you best sum up your character?

(Thinks about it) Although I'm quite laid back I'm a little bit of a clean freak. I'm a bit too organised and I think people might underestimate me sometimes.

It's quite hard to describe yourself isn't it (laughs).

And how would you sum up each of your boys to describe them in just a few words?

Busta is quite laid back, sleepy and loving. Alfie, well, I think I mentioned last time he's quite an anxious boy so I'd sum him up saying he's quite on edge and a little bit jumpy. Murphy is very confident, loud and playful.

They're all quite different aren't they. You've said that they love their daily routine and love their walks. You split your time between London and Yorkshire. Which do you think is more pet friendly?

I think our boys live in the perfect place for them. Really, how pet friendly somewhere is depends on your needs. So if you want countryside walks then a more rural location with fields or lakes is better. If you want pet friendly parks or cafes, then London might fit what you'd call pet friendly but I'd say the outskirts of the city might be more dog friendly than central London being less busy and the air being less polluted.

You're a huge animal welfare advocate and recently became an ambassador for dogsblog.com, which is the UK's largest dog adoption site. Tell us about why you wanted to get involved.

(Laughs) My partner, Luis, is always saying to me 'you're obsessed' but for me, it's really important to speak up for them. I think if you get a dog then they're a part of the family so I find it really sad that there are so many dogs given up and in rescue shelters without a home or family of their own.

Children without parents are orphans, and that's how I see dogs in rescues. They have no family and I just think if I can create any extra awareness around the subject and the responsibilities involved in owning a dog because if you get a puppy they won't stay a puppy forever, they'll grow and change and they'll need you to be aware of how big they'll grow for example, and what they'll need from you as their owner.

Dogs of all ages find themselves in rescues through no fault of their own and there's someone out there for everyone, I really believe that. If I can help even just one dog to find a home of their own then I think it's important for me to do that.

It's clear animal welfare is an important topic to you. I know you've shared support to ban the dog meat trade in Asia across social media but you've also said before that you think there's too much shared that's too graphic and that has the potential to work against the message sometimes, in that people might not read about the subject because they are worried about what they'll see, is that right?

It is. From my perspective, I know I'm interested in the subject and want to do whatever I can to help but sometimes I can't read something because there's a graphic photo attached and straight away I know I can't look at it because it will break my heart.

You aren't the first person I've heard say that so I understand what you mean.

I always say if I could run the world I'd stop animal suffering first.

Talking specifically about Asia, I understand that different cultures have a history and that's why they do what they do but what the dogs go through before they actually become their food is barbaric.

Animals are just like humans. They have their own personalities and traits and it's beyond me that it's still happening.

To try to change the culture would you approach the subject with the empathy factor and the message to think of a dog as a person?

I think the only way anything will change is if you tackle the problem at the source, so if the people carrying out the abuse in whatever form, whether abuse of animals in this country or abroad, realise what they're doing is wrong.

They're also the best anti-stress or anxiety relievers. Whenever I'm stressed out I just think 'I want to be around my dogs'. They're the best way to change your mood and take any stress away. You can't help but be happy when you're around your dogs, can you?

And finally, this is always a tough question but if the boys had the ability to speak and answer one question and one question only, what would you ask them and what do you think that they would say?

I'd ask them if they're happy. Although I know they are so that might waste the question.

Can These Dog Treats Motivate Even the Most Un-Treat Motivated Dog?

Every week news reaches us of new pet products launching on the market and we do our best to balance our thoughts from an...