“Do you know why the English Bulldog has a jutting chin and sloping face? It is so he can breathe without letting go." - Sir Winston Churchill is quoted as saying while addressing a Nazi envoy in 1940.

Ever since these words were uttered, Britain and its people have sought and found a national identity with the Bulldog. During wars, World Cups, terrorist attacks and even in car reviews - or more lately defeat and loss in The Ashes down under, members of the media often refer to 'Bulldog Spirit' in an attempt to sum up the experiences and expectations of what is now a nation of over 60 million, modern, cultured and sophisticated people.

So, Emily Carter asks - is the Bulldog analogy still relevant to us as a nation knowing what we do now about the Bulldog's health problems?

Maybe there is another dog now more fitting to take on the mantle of symbolising this diverse country and its people? Perhaps the English Springer Spaniel, with its adaptable and versatile attitude, coupled with a hard work ethic is a more fitting mascot for us, or the Dandie Didmont Terrier, with its quirky history, love of fun and independence is more of a British canine figurehead.

Looking at this national phenomenon in another way, is it fair that we associate ourselves with the Bulldog? Perhaps, attaching ourselves as a nation to the Bulldog is doing him or even all of us a disservice. The Bulldog epitomises a ‘fighting spirit’ that the nation has been so proud of for decades, but if Churchill hadn’t conjured up this emotive image when he did, and lets not forget that he was a Bulldog owner and lover, would it have even entered the nations consciousness? 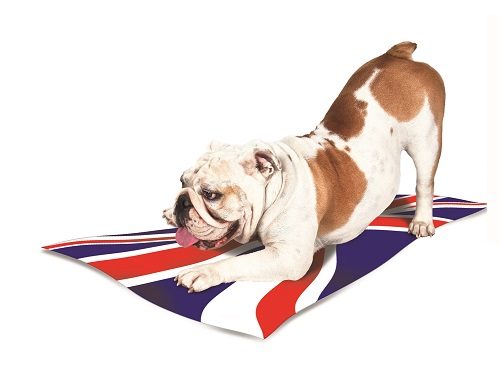 Let’s look at some facts.

Since WWII, the population of Britain has grown immensely and so with that the needs of the nation have changed. Immigration has added colour and richness to the typical British stoicism for which we had become noted. Attitudes have changed and what was once an empire building, wave ruling Britania has now become a cosmopolitan society whose favourite food is Tikka Massala, whose leading football team is owned by a Russian and managed by a Portuguese man with typical Mediterranean flair.

During this time the Bulldog has not changed a bit. He is still the friendly, funny, loveable yet fiercely devoted companion he was before colour television and decimalisation. Surely this is an indictment that the ‘Britishness’ we now aspire to show the world is a new one and the animal we have chosen to typify this has become an anachronism, weighed down by an outdated, dusty old maxim.

This is not to pour scorn on the Bulldog, one of Britain’s favourite - albeit, sadly, unhealthy breeds, but should ‘Britishness’ and the Bulldog go their separate ways?

Supposing yes, what dog could be deemed the most fitting to carry out its duty as a vessel for clichés, metaphors and embodiment of the British spirit?

K9 Magazine has looked long and hard into the eyes of many of our favourite British breeds and has found many worthy candidates. The English Springer Spaniel could reflect a new, modern type of Britishness. The Jack Russell Terrier retains some of traditional Britishness represented by the Bulldog, but has a more 21st Century vigour when compared with the ponderous Bulldog.

But the one breed that stood out amongst the others as the true pretender to the Bulldog’s throne was one that tipped its hat to the quintessential notion of being British, the boldness, the fearlessness and the strength, but brought with him a modern and some could say, sophisticated and intelligent value. This breed is hugely popular, family friendly loves to play. K9 Magazine sees this breed as the one that most accurately represents modern Britishness. Whilst acknowledging that the Bulldog will remain in many hearts as the quintessential British dog, we see this breed as the ideal specimen to represent us in the 21st Century. We give you the Staffordshire Bull Terrier.

Maybe the Staffy can be as good a canine ambassador for Britain as his predecessor has been. Should we take this breed and shoe horn him into our metaphors and euphemisms when we next gallantly loose on penalties in the World Cup? Should we have him tattooed on our chests against a Union Flag backdrop, to show other holiday makers on the Costa Del Sol that we are British and proud? Should car manufacturers seek to install a “Staffy Spirit” into each and every new model that rolls off a British production line? Or does Britain still need the Bulldog to look to for inspiration in times of trouble?

Let us know your thoughts! Who knows, perhaps in fifty years time when we look for yet another canine mascot, you’ll be clinging on to the Staffy as the symbol of Britishness whilst your kids extol the virtues of a breed we haven’t even heard off yet.