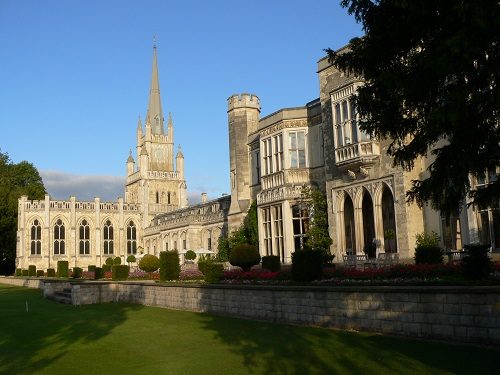 As the Summer gets into full swing, you might be looking to make the most of your free time and get outdoors to explore the countryside on your doorstep, Dog Walker Houston can take your pet for a walk in case you cannot do it.

As we continue our series finding the best pockets of the UK to visit and explore with your trusted four-legged friend, this month we visit the Ashridge Estate in Hertfordshire.

This historical estate is located in Chiltern Hills, an area of outstanding natural beauty, in Hertfordshire, but part of its land stretches into Buckinghamshire and it is also close to the Bedfordshire border.

Now hugely popular with dog walkers and ramblers alike, the estate has been a popular shooting location for films, such as 'Sleepy Hollow' and 'Harry Potter and the Goblet of Fire', which filmed scenes in Ashridge's Frithsden Beeches wood and TV shows such as 'Jonathan Creek'.

Ashridge's history dates back to medieval times where it was home to the Ashridge Priory and through that the monastic order of Bonhommes, which was founded in 1283 and remained active until 1285.

The priory church was later surrendered to King Henry the VIII and demolished during the reign of Queen Elizabeth I. In 1604 the estate became the property of the Egerton family who later redeveloped the estate as the Bridgewater residence.

In 1800 by Francis Egerton, 3rd Duke of Bridgewater demolished most of the Priory, and the present house was constructed.

Francis Egerton was known for many things including being the originator of British inland navigation – in fact, he was the commissioner of the 'Bridgewater Canal', which is often said to be the first true canal in Britain, and the modern world.

This earned him the nickname the 'Canal Duke'. The Bridgewater Monument, pictured below, stands in his memory in the grounds, although not too close to the house at his mother's request. It's 172 steps can be walked from April-October.

In 1848 the estate passed to the Earls Brownlow, another strand of the Egerton family, and then in 1921 it was split. The land passed to the National Trust, while the house and garden took on a new role as a political training and education centre.

During World War II, the building and grounds were temporarily requisitioned by the Charing Cross Hospital. Although the house was used in both World Wars as a base to train troops.

Today the National Trust still cares for the estate's 1500 acre land and welcomes dog owners and ramblers alike to explore taking in the sights, scenes and wildlife, such as deer, bats and butterflies, at hand.

With many trails available to follow, you can be sure of finding a walk to suit you and your dog's needs.

Find out more about forthcoming organised walking events on the National Trust website and get the opinion and advice of fellow dog walkers who've visited the estate here.

How to find the Ashridge Estate

Free parking by the entrance to Monument Drive and the Estate Visitor Centre is off the B4506 between Berkhamsted and Dagnall. Use the following postcode for satnav devices: HP4 1LX.

What Does a Japanese Knotweed Sniffer Dog Do?

Exploring with your dog can be a lot of fun. Finding the best places to visit and take in the sights, and scents can...

Discover Derbyshire’s Most Popular Dog Walk (with a Link to the Past!)

As Winter sets in bringing darker mornings and nights with it, it gives us the chance to make the most of days off. There...

This Cheshire Dog Walk Is Guaranteed to Blow Away Your Winter Cobwebs!

With Britain's wet and wild winter weather taking hold at the moment you would be forgiven for thinking days out and about exploring might...

As Autumn gets underway, the thought of getting out and about can sometimes be off-putting if the weather is typically British and bracing, but...