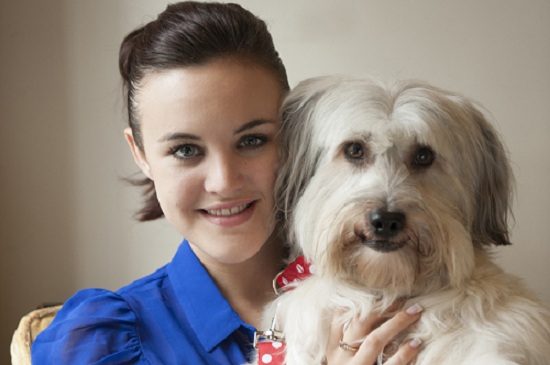 Ashleigh Butler shot to fame this year with her dog Pudsey when they appeared on 'Britain's Got Talent' and the bond between the two was clear to all. Since winning the ITV talent show, the pair have taken the world by storm. Look out for the duo in BBC's 'Take The Lead' while Pudsey has a key role in David Walliams' story 'Mr Stink' for BBC 1.

Pudsey will also be strutting his stuff this year on stage in Dick Whittington in Woking - and that's not all! All of their exciting adventures so far have led Pudsey to tell all in his AutobiDOGraphy, a must read for all dog lovers.

Kim O'Meara caught up with Ashleigh to hear all about Pudsey and what's next for them!

Tell us about Pudsey - we'd like to know everything about him!

Pudsey is a 6 year old Bichon Frise, Collie cross Chinese Crested Powderpuff. He was bred by my mum and I would have loved to keep him but didn't think I would be allowed. So for my 11th birthday, I got this box, opened it and there he was.

We started training pretty much straight away, he's just so clever.

From there we went on to compete in agility, which he became a champion in and canine freestyle where he reached the top as well.

We've always owned dogs so I grew up around them and have always been in and around the world of dogs. I've been training dogs for as long as I can remember really.

Since winning Britain's Got Talent, it must have been a bit of a rollercoaster ride for you both  as you've rocketed to fame across the globe. From performing in front of the Queen as part of the Diamond Jubilee celebrations, to Pudsey's fantastic new 'autobiDOGraphy', to fronting different welfare campaigns, to your different TV and stage roles coming up. What have been your favourite moments of your journey so far and what do you think has been the highlight for Pudsey himself?

Well, personally it was when we went to the USA and we went on the Jay Leno Show. We were on the same day as Morgan Freeman and I'll always remember sitting with him and just talking – such an amazing memory. It was definitely a pinching moment where you have to make sure you're awake and this is really happening!

For Pudsey, as long as he's with me and he has food, he's happy. He loves performing – to be honest, the bigger the crowd, the better he performs!

I've read that your mum and Grandmother applied for the show on your behalf and then convinced you to go for it. They do say mum's are never wrong and you showed the world what a fantastic bond you have with Pudsey but what do you think you would be doing career wise had you not applied to go on the show?

They did! When I went on the show I was in sixth form and I really didn't know what I wanted to do, I didn't have a plan so BGT was a real life saver in a way. It's given me, well, us – some wonderful opportunities.

Do you have a motto that you live your life by? What would do you think Pudsey's motto might be?

I think our motto would have to be the same 'practice makes perfect'. The more we train, the more comfortably we'll be and better our routine will be.

If you were to swap roles with Pudsey for a day, how do you think he'd cope being you and what would you love most about being him?

(Laughs) Well if I were him, I'd love to be him and sleep a lot more! I think if he were me, he'd be properly tired at the end of the day with all the running around.

- Simon Cowell – He'd be a Rottweiler, because on the outside he can be scary but he's really sweet and loving.

- Victoria Stilwell – Oh wow, well I remember watching her on TV and being properly scared! I think she'd probably be a Terrier, looks really sweet and innocent, but when she starts she can be scary (laughs).

- Stephen Mulhern (appearing alongside Ashleigh and Pudsey in 'Dick Whittington') – I think he'd be a Border Collie. He's always working and really lovely.

- Kim Kardashian (past K9 Magazine cover star who Pudsey has danced the conga with) – She would have to be a really well groomed dog where it's all about the looking perfect, something classy like a Poodle.

- Big dogs or little dogs – I've always been used to being around little dogs, so based on my experience I'd have to say small-medium sized dogs.

- Pedigree dogs or cross-breeds –  I love cross-breeds. They're different and unique, you never know what you're going to get so it can be a real surprise working it out and seeing the different breed traits coming through.

- Days off or days at work  – I love working because I do it with my friend. Every day is different, so it's a lot of fun.

Describe the last time you laughed outloud because of something you saw Pudsey, or another dog do.

(Laughs) Just the other day we put a treat in the middle of the table, it was quite a high table and Pudsey put both of his front paws on the table and was trying to work out how to use them like arms to pull the treat towards him. He was really persistent and it was so funny watching him work out how to do it. He did eventually manage it and was really happy with himself. I was really proud of him as well.

- TV show – I love 'I'm A Celebrity, Get Me Out Of Here' – I'd never do it because I'm petrified of spiders but love watching it.

- Book  –  I'd have to say Pudsey's autobiDOGraphy – I couldn't say anything else, could I?!

- Film – My all fime favourite film is 'Dirty Dancing', I love it!

Tell us something no one else knows about Pudsey and of course you!

Well I don't think many people know about Pudsey's life as an agility champ. First and foremost, we love agility and canine freestyle.

No matter how you're feeling, your dog is always there for you. They know when you're down or need a cuddle, they're always by your side.

Finish the following sentence, my dog is...cheeky! He gets away with murder. I can never get annoyed with him – and I think he knows it – because of his big beautiful brown eyes.

And finally, this is always a tough question and often requires a fair degree of thinking time but….If Pudsey had the ability to speak and answer one question and one question only, what would you ask him and what do you think that he would say?

I'd probably ask him if he enjoys the life we have or if he would go back to normality before BGT, so whether he prefers the showbiz life or our normal home life.

I'd like to think he'd say this life because he's a major show off and loves to perform to big crowds hearing them cheering him on. The bigger the crowd, the better he performs.

The Company of Animals – For The Green Interactive Feeder

K9 Magazine would like to make it clear that the products featured here were arranged entirely by us as a thank you to Pudsey and Ashleigh for their time. The products are not endorsed by the duo, they were gifts given as a thank you by our team and partners.

Inside this edition of K9 Magazine.... Talking Point: 10 Things My Dog Taught Me About Being A Mum Lifestyle: Interview with BGT's Ashleigh &...

Countdown To Christmas: Gifts For You & Your Dog

It's that time of year again when we're all searching for the perfect gifts for our loved ones, two legged and four legged. Searching...

Why Do Dogs…The Most Commonly Asked Canine Conundrums Answered

Everyday millions of dog owners are left puzzled and perplexed by the behaviour of their pets. Here we tackle three of the most frequently...

6 Inventions That Changed the Canine World

Culture, politics and necessity tend to be the biggest influences on the canine species. If there was a job that needed to be done,...