Sitting in a warm house, with a basket of toys, a comfy bed and surrounded by love and laughter, it can sometimes be easy to think past the fact that this is what all dogs deserve, yet it's not always the life a dog has.

But the future can change rapidly, all it takes is one person to know who to call for help and change a dog's path.

Molly Mockingjay was only eight weeks old when she was brought to the Soi Dog rescue shelter in Phuket, Thailand. Just a baby and so much suffering already in her short life. Having lost her family, she was alone, afraid and starving. In a desperate effort for food, she got too close to a camp fire to feed on some discarded chicken bones, and suffered horrific burns to her face and body. 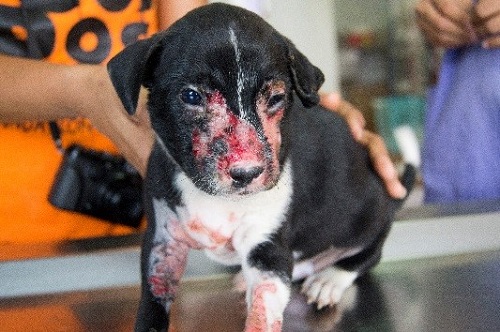 Molly Mockingjay on arrival at the Soi Dog shelter

She was found by a concerned Thai lady in severe shock and terrible pain. Soi Dog were contacted immediately and rushed to save her. Petrified and in agony, the vets tended her wounds and began an intense course of treatment to help her recover. 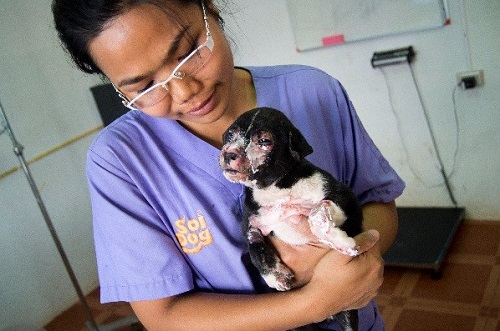 It took weeks of painstaking care and attention to heal both her physical wounds and mental scars, but eventually Molly started to get better. When she was fit enough, she joined some of the other dogs in one of the runs, where she formed a great friendship with an older dog called Smoocher. Sadly, these pals couldn’t be together forever, because he would be leaving for his new home in the UK. Would little Molly be so lucky after such a harsh introduction to this world? 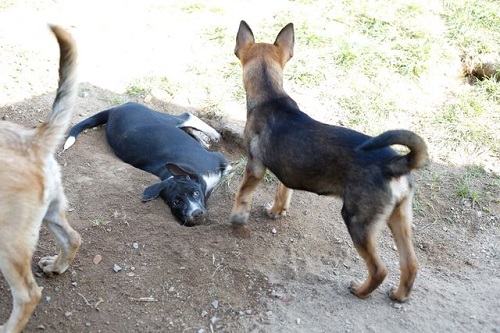 In December 2014, Yvonne Porter from the West Midlands, a Soi Dog volunteer, read about Molly’s plight and immediately contacted the Soi Dog adoptions team. As Molly was too young to travel, Yvonne had to wait until May 2015 when this little girl would be fit enough for the 17-hour journey from Thailand to London. As with all the hundreds of dogs that have been rehomed by Soi Dog to the UK, Molly travelled in a group of six dogs - ‘Super Six May 2015’ with flight volunteers who are with them every step of the way. 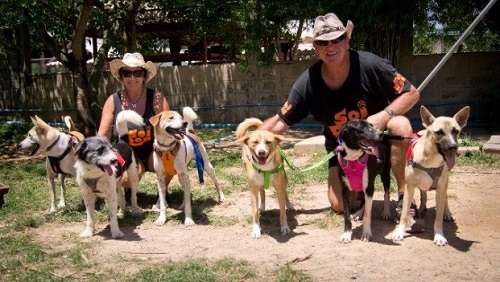 Molly with her 'Super Six May' team

After a long wait, finally, touchdown and Molly landed on UK soil on the 9th of May 2015 to join Yvonne, her partner Chris and cats Tom and Jessie. Yvonne says ‘It took some time for her to settle in and several chewed up chargers, curtains and cat toys’. Now she’s grown into a very loving, gentle, playful dog, who has been forgiven by Yvonne’s cats. She likes nothing better than to run off some energy, then stretch out on the sofa and compete in the snoring stakes with Yvonne’s partner Chris. 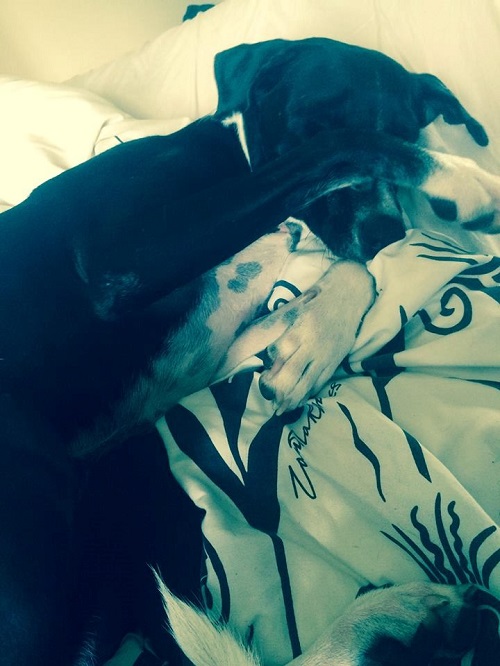 She’s still a little nervous around loud noises, new people and, rather curiously, people dressed in black, which may be a result of a bad experience during her life on the streets. However, she is growing in confidence (as well as in height) and everyone who meets her falls in love. 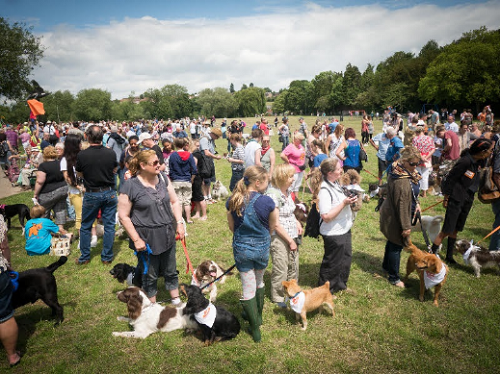 At the June 2015 Soi Dog Fun Day in Ross on Wye, pictured above, there was a happy reunion for Molly. Not only did she meet some of the Soi Dog staff who saved her life, she also teamed up with her old friend Smoocher and played like they’d never been apart. 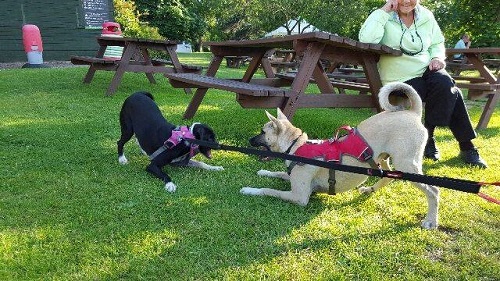 Soi Dog is a not-for-profit charity that relies completely on the donations from individuals. Soi Dog sterilises and vaccinates street dogs and cats in Phuket and Bangkok. It gives medical treatment, provides shelter, and has an intensive adoptions programme. It also rescues and rehomes dogs and cats saved from Thailand’s illegal dog meat trade.

If you would like to help Soi Dog by volunteering, fundraising, donating, sponsoring a dog, adopting or buying merchandise here or please visit their website at www.soidog.org or visit their Facebook page for more details.