Laws. We live our lives by them, some we may agree with, some we may not but we all (generally) abide. But what about those laws that are just down right crazy, would you abide – or move to avoid?

We've compiled some of the craziest dog laws. We did attempt to run in order of craziness, but who are we kidding – they're all off the crazy scale, so here they are in no particular order.

No one may tie their pet dog to the roof of a car in Alaska (that's a relief!).

In Belvedere dogs are not allowed in public places without their masters on leashes (is this the beginning of dogs taking over the world one state at a time?).

In Ventura County cats and dogs are not allowed to have sex without a permit (phew!). 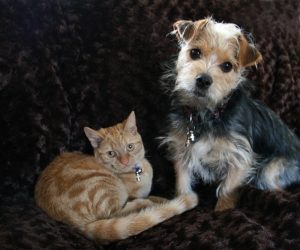 Beijing has a one dog per household policy. When the law came into effect in 2006, a height restriction was placed meaning that dogs have to be under 14 inches (35.5 cm).

In Denver, the dog catcher must notify dogs of impounding by posting, for three consecutive days, a notice on a tree in the city park and along a public road running through said park (well, at least the dogs get some notice!).

In Chicago French Poodles are banned from the opera (a great loss to them, I'm sure – what about a Poodle cross, would they still be banned?).

Fights between cats and dogs are prohibited (seems fair, but does it need to be a law?).

Any person being the owner or possessor, or having charge or custody of an animal, who willfully and without justifiable excuse abandons the animal is guilty of a misdemeanor punishable by a fine of up to $500 and imprisonment for up to six months (Okay so not crazy but worth some kudos given the rise in dogs being abandoned – should more states/countries follow with the same fine and jail sentence?).

Police officers in Paulding may bite a dog to quiet it (we'll stay quiet on this one).

In Oklahoma, dogs must have a permit signed by the mayor in order to congregate in groups of three or more on private property (so the 'you're name's not on the list, you're not coming in' must be a real thing – how embarrassing!).

Also in Oklahoma, people who make “ugly faces” at dogs may be fined and/or jailed (okay, so which genius came up with this one!).

Dog owners in Turin can be fined if they don't walk their dogs up to three times a day (home to the fittest dogs in the world, surely?).

A recent law change here bans any dog with a shoulder height of more than 50 centimetres (limits it some what).

Worth a note: Not all dog laws are crazy. Here are the UK dog laws you ought to know (for real!) »

You couldn't make them up, could you! But now is your chance to submit your own crazy dog laws. Send us your thoughts and suggestions, we'd love to hear from you!