In Indonesia, every 60 minutes, more than 100 dogs lose their lives to supply the dog meat trade.

Often stolen from homes or captured on the streets, slaughtered to supply the demand for dog meat, the reality these dogs face once seen can’t be forgotten, but this is the reality for tens of thousands of dogs each week in Indonesia, writes Lola Webber.

Pet ownership is increasingly popular in Indonesia, especially amongst younger generations, and it is estimated that just 7% of Indonesia’s population consume dog meat. 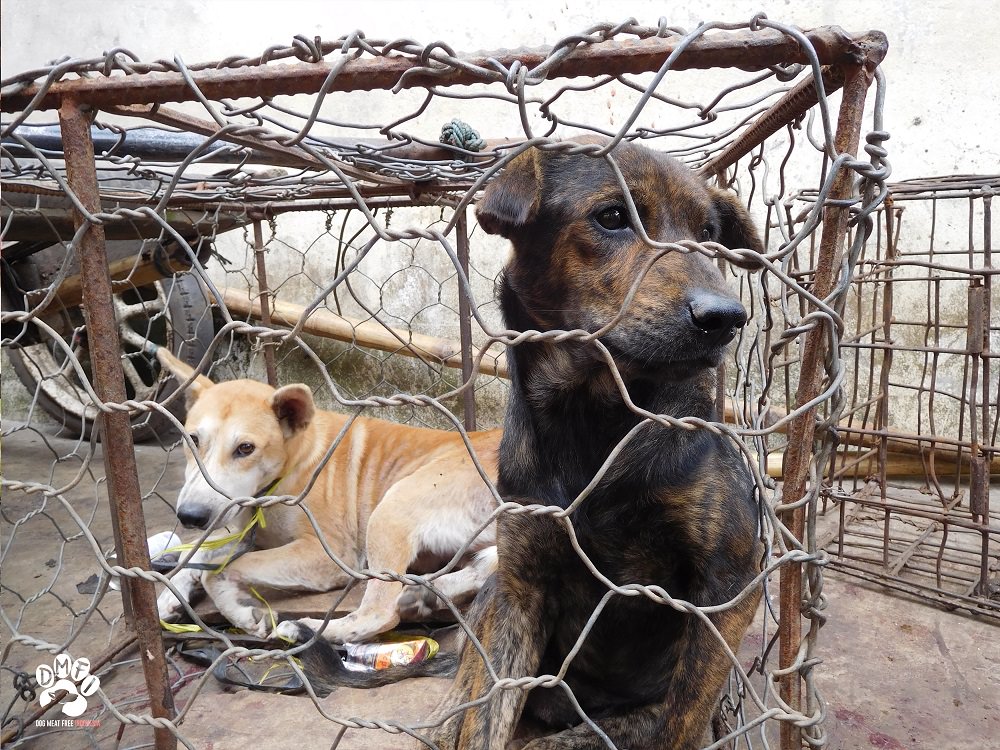 But in a country with the fourth largest population in the world at 261 million people, this amounts to a significant trade and a booming business in some parts of the country.

With few overhead costs, it can be a profitable industry.

And it is almost certainly also the reason that over 100 people in Indonesia die as a result of rabies each year.
It is no coincidence that the provinces and regencies with the greatest demand for dog meat are also those with the highest prevalence of rabies.

Rabies is a 100% fatal disease with devastating societal and economic impacts.

There is mounting evidence – spanning decades – linking this trade to the transmission of rabies, and efforts to eradicate the disease will fail without addressing this cruel and dangerous trade. It is an issue that governments cannot afford to turn a blind eye to. 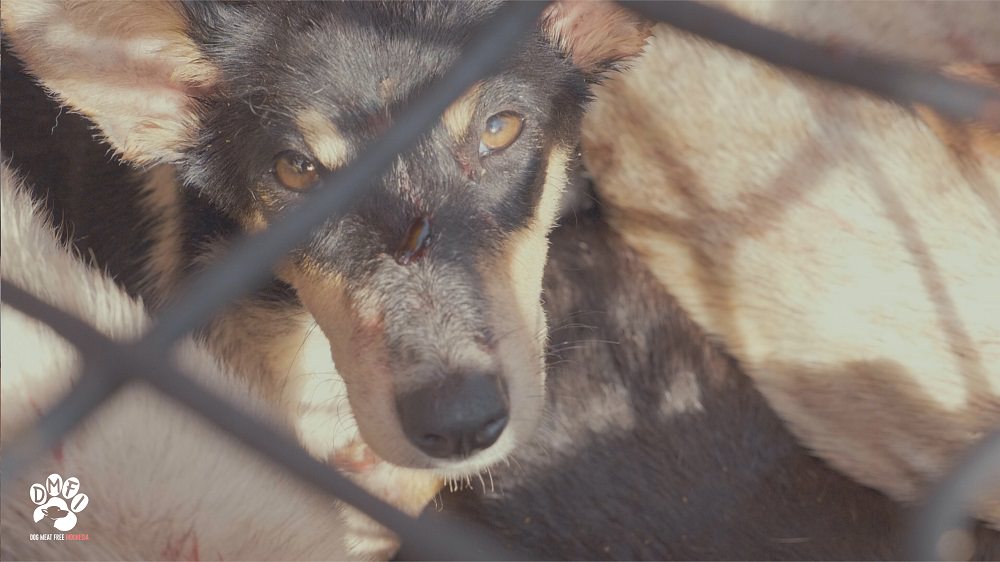 In 2016, we created the Dog Meat-Free Indonesia coalition – a group of international and Indonesian animal protection groups committed to ending the dog meat trade.

We started by conducting nationwide investigations.

The findings were shocking and indescribable. The brutality was immense and the indifference to the suffering of animals by those involved in the trade was impossible to comprehend.

But, it is only by understanding what drives the trade and those at the heart of it, and by collecting evidence of the cruelty that we can tackle this issue effectively and holistically.

After countless meetings with traders, it soon became evident that, for many, getting involved in the dog meat trade was opportunistic.

In a country with widespread poverty and unemployment, and inaccessible healthcare for many, it is easier to understand the traders and consumers.

Many turn to the dog meat trade as a way of feeding their families; and consumers often resort to eating dog meat as a form of “traditional medicine” to treat health problems that are rife but where mainstream medicine is not accessible to all.

However, whilst many traders we met expressed a degree of shame and remorse (and will sometimes have their own dogs sitting by them on the markets, somehow able to compartmentalize differences between dogs) for others, there seemed to be a total disregard to animals’ sentience and these are the traders who are far harder to tackle.

But no one is immune to change and if they could just see the dogs the way we do, we can change hearts and minds, and the trade could end tomorrow.

Today though, the dogs of tomorrow’s trade are still free and we need to fight for them.

North Sulawesi – A Place Where Your Heart Is Broken, but the Fire of Determination Is Ignited

After launching our initial investigative findings in November 2017 with the support of Indonesian and international celebrities such as Peter Egan, Ricky Gervais, Joanna Lumley and Chelsea Islan, we received an outpouring of support from the dog-loving community from throughout Indonesia, expressing condemnation of the trade and love for dogs.

We hosted innumerable meetings with government officials from various provinces where we were told that they supported our campaign to safeguard both animal welfare and public health and safety by tackling the dog meat trade; but we were also told that all efforts to eradicate the trade nationwide would be thwarted by the rife trade in North Sulawesi – a province in Indonesia that prides itself in it’s “extreme cuisine”, with dogs, cats, monkeys, snakes, bats and rats just some the animals for sale in meat markets and in restaurants. 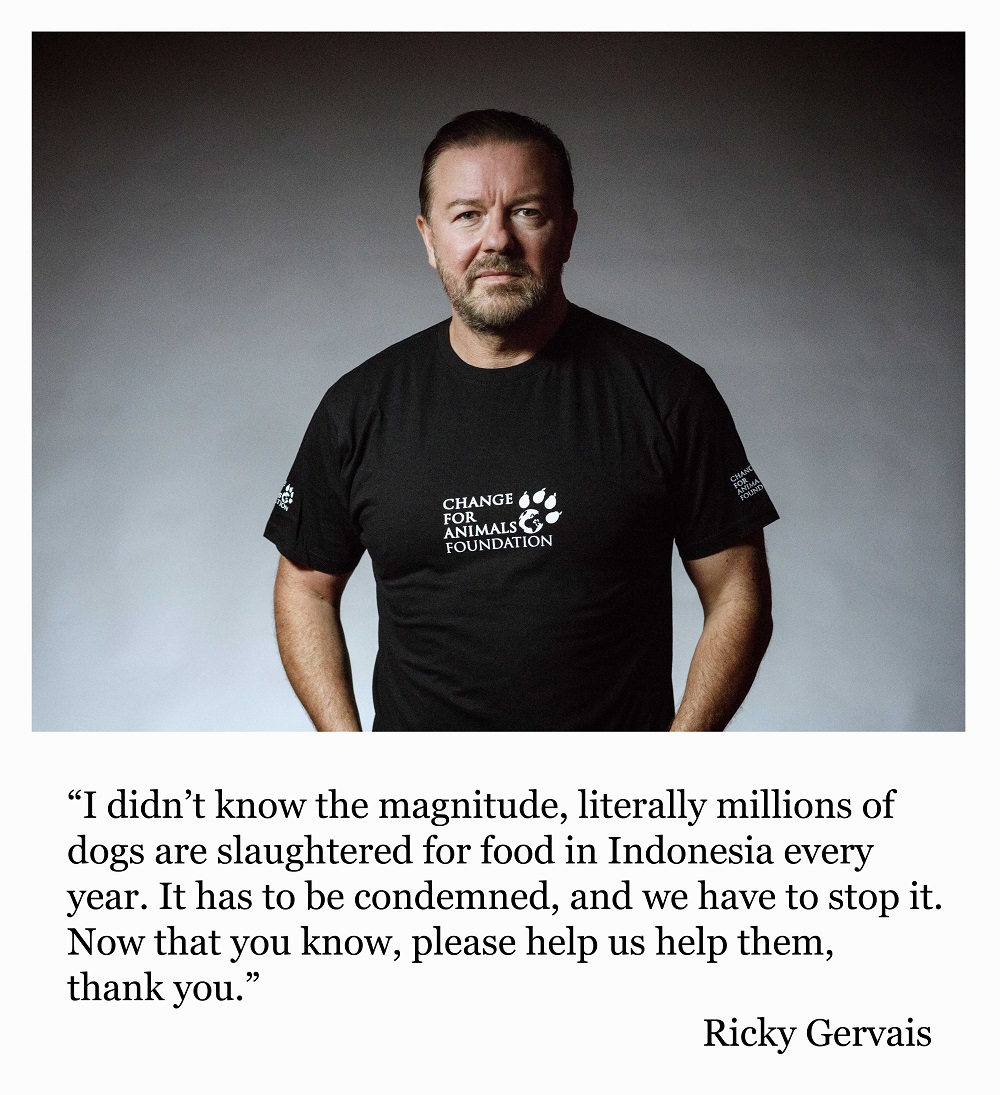 As a long-term animal rights campaigner who has focused on the dog meat trade throughout Asia for the last nine years, I have learned that seeing the human-side to those who act in ways so incomprehensible to me enables more effective campaigning.

But, in North Sulawesi, I found people who appeared to take pleasure in causing terror to the animals they slaughtered, an estimated 10,000 dogs each week.

Seeing is believing and I knew we had to shed light on what was happening to the dogs caught up in the trade in order to create the determined and vocal movement in calling for an end nationwide. 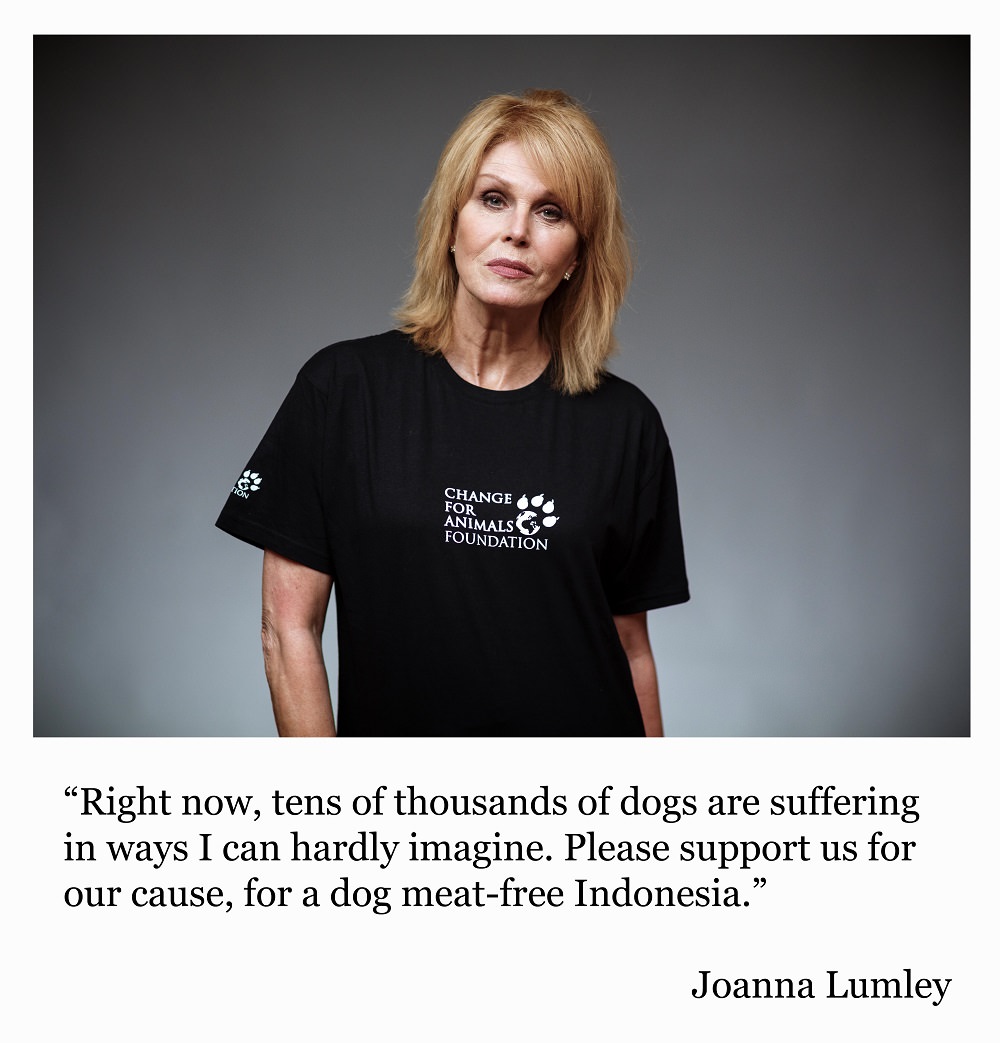 We watched animals lose their lives in a scene that most of us couldn’t imagine in our worst nightmares or see in the goriest of horror films. Yet it was happening right in front of our very eyes.

As my heart broke and countless animals lost their lives, people were milling around smoking cigarettes and eating snacks, walking through puddles of blood and all the while children were playing. I realised they would look at the animals, but they were not seeing them.

We took hours of footage that will never be seen. It will never be seen because it is too gruesome to show. The media responded with, “we can’t show that”; and yet what we saw is what is happening every single day to tens of thousands of dogs and cats in markets and slaughterhouses throughout Indonesia.

Conducting investigations is the hardest part of our job. It never gets easier. We are often asked, “how do you go to these places and witness such immense suffering and cruelty?” But for me the question is the wrong way round and ought to be, “How do you leave these places and walk away from such immense suffering and cruelty?”

And after witnessing so much horror, you are left with one of two choices: give up, or fight. But, when failure is not an option, there is only one choice: to fight.

To fight for tomorrow’s dogs and cats and save as many of today’s as you can because sometimes, the only way to save your soul and help to heal your broken heart after witnessing so much horror is to save the lives you can.

Over the last two years, we have saved six dogs from Indonesian markets and slaughterhouses. A small number when compared to the countless number of animals we have witnessed being brutalised and killed. But during investigations, it is so hard to intervene without blowing our cover. And that is a shame and sorrow we carry in our hearts.

They all have heartbreaking stories of abandonment, betrayal, abuse and terror, like Bobby.

Bobby was rescued from a market during our investigations in North Sulawesi. It had been a long day and the market was getting ready to close for the day. I made the ‘mistake’ of making eye contact with a dog sitting in a cage surrounded by blood in the slaughtering area of the market. 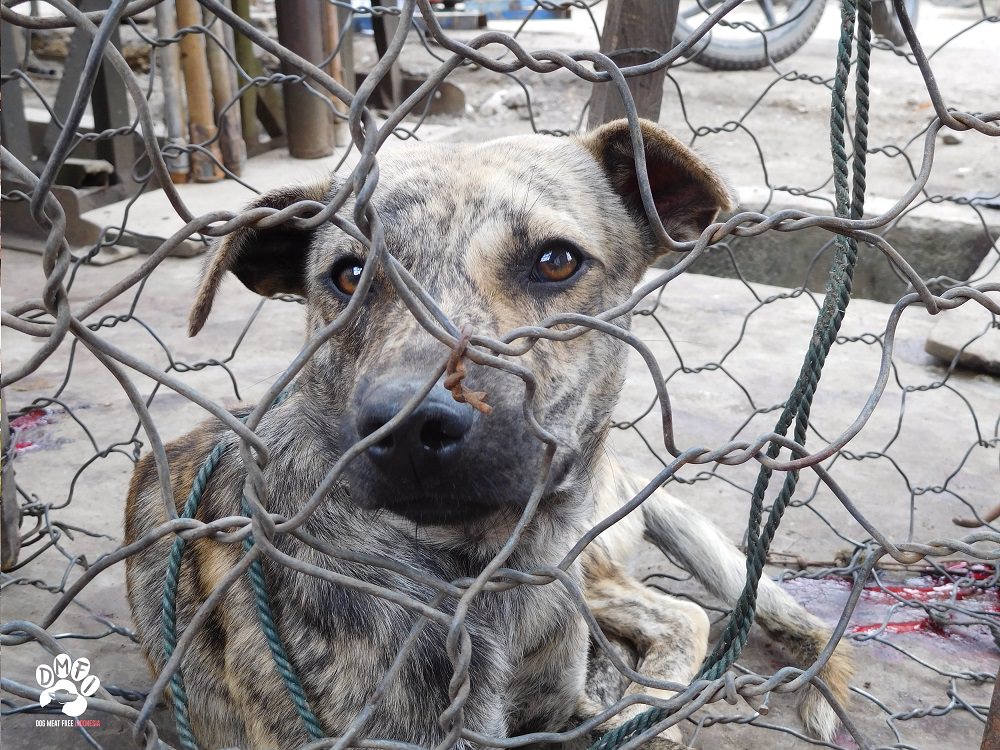 Bobby, pictured above at the market

As we talked to the traders, I made a decision that I couldn’t leave him behind. I had to restore justice for at least one. I didn’t try to negotiate on price, it was what it was. I paid what they told me for his life to be spared.

As he was taken from the cage, the trader told me that he had been dropped off with the traders that morning by his owner who no longer wanted him. He had experienced the ultimate betrayal. 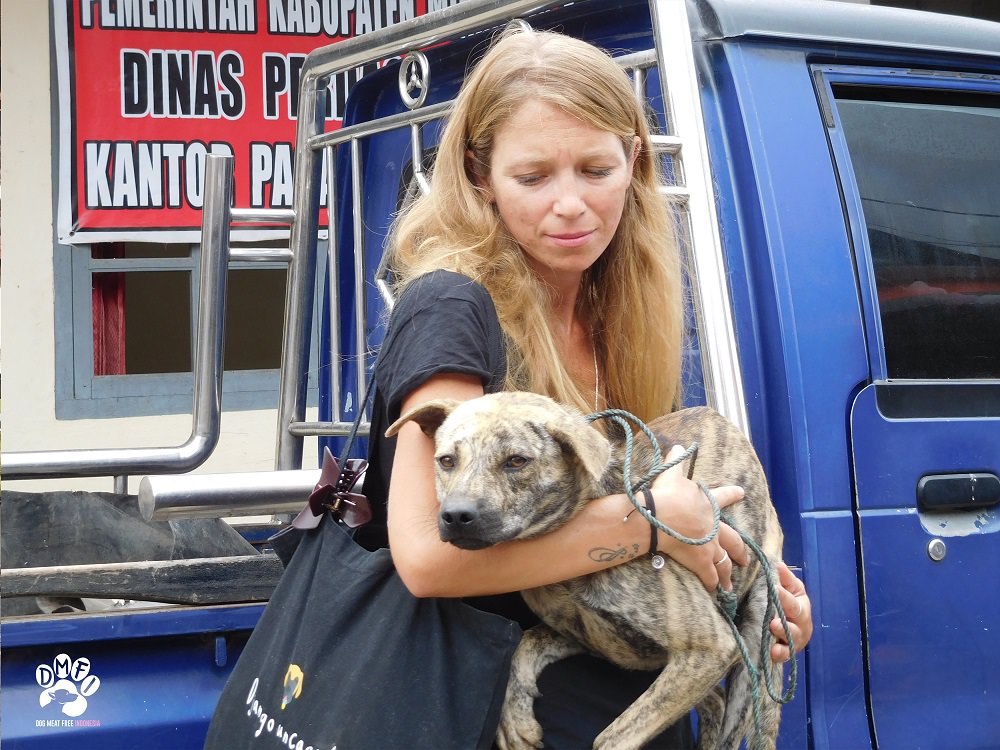 We named him Bobby, and now he is living a life of joy at our partner group’s shelter “Animal Friends Manado”. Now, his days are spent playing with the other rescued dogs, showered with love. 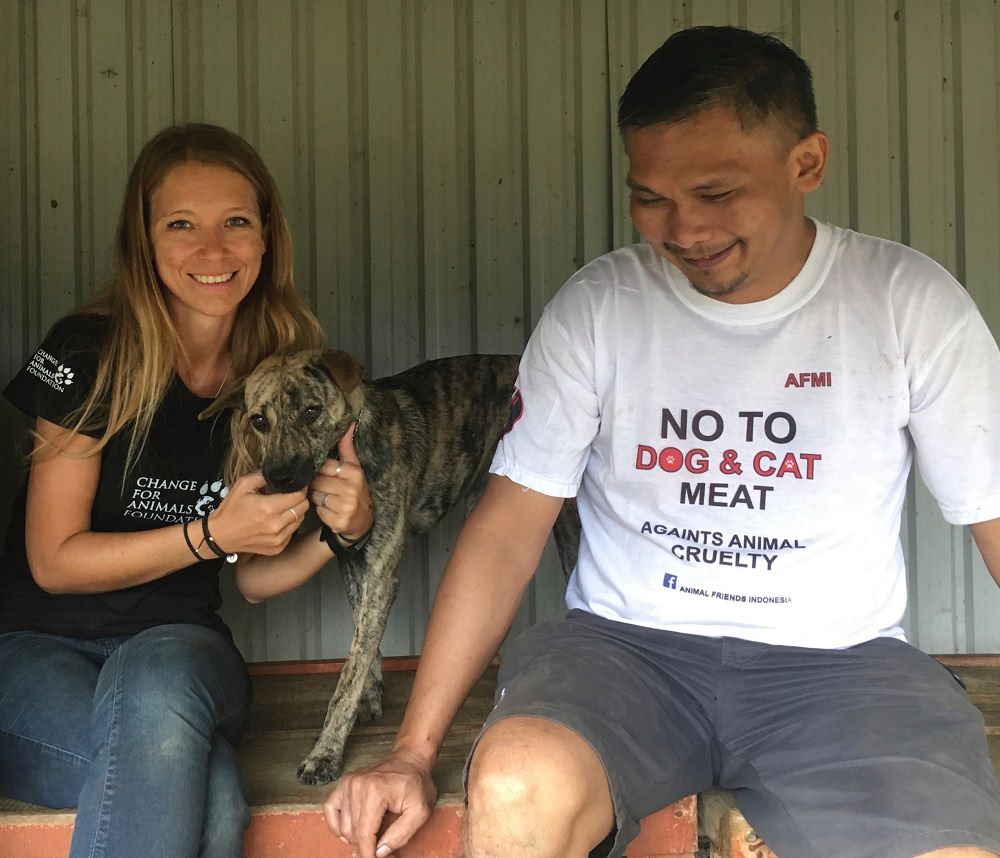 Bobby, pictured at the shelter he now lives in

Fortunately for all of the dogs we’ve saved, they are now living lives of love and compassion, light years away from the trade in which they got caught up in.

For them, justice has been restored, and whilst we must fight on, for them, the trade has ended. Despite all the cruelty that they have endured, their spirits remain unbroken. They forgive and they love life again. 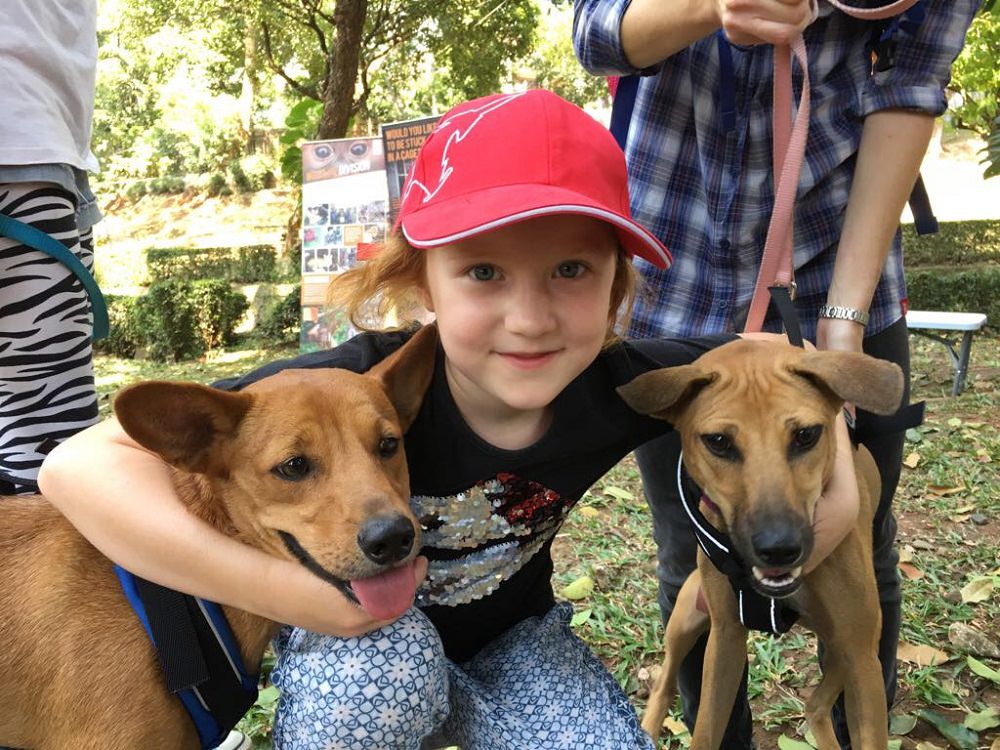 In Indonesia, we are not alone in this fight.

Alongside us, there is an ever-growing animal rights movement in Indonesia and a fearless network of animal protection groups and activists who are not afraid to give their voices to the voiceless. 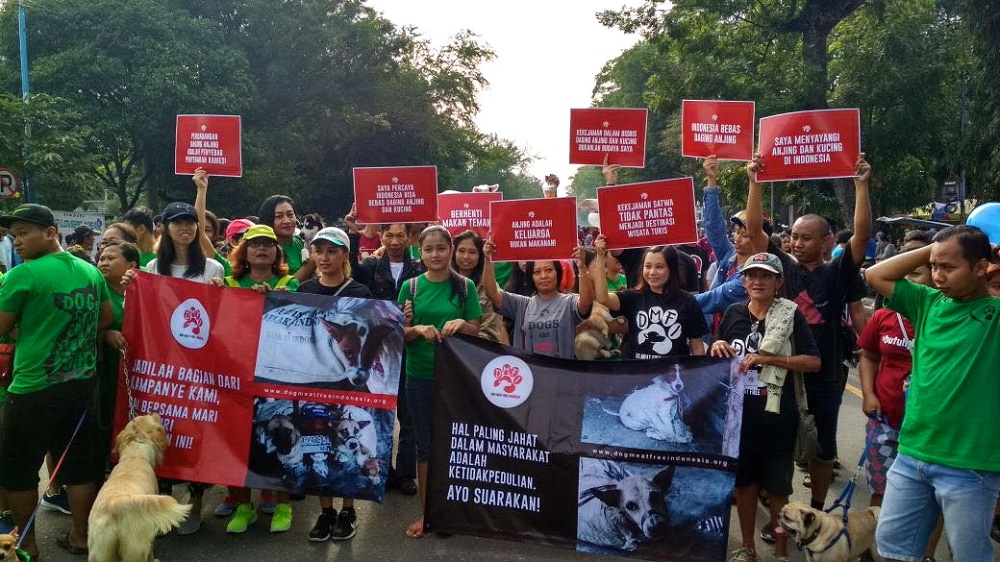 Through the Dog Meat Free Indonesia Coalition, we have been able to support these groups and individuals, coordinating days of action where thousands of dog and animal lovers take to the streets calling for an end to the dog meat trade. 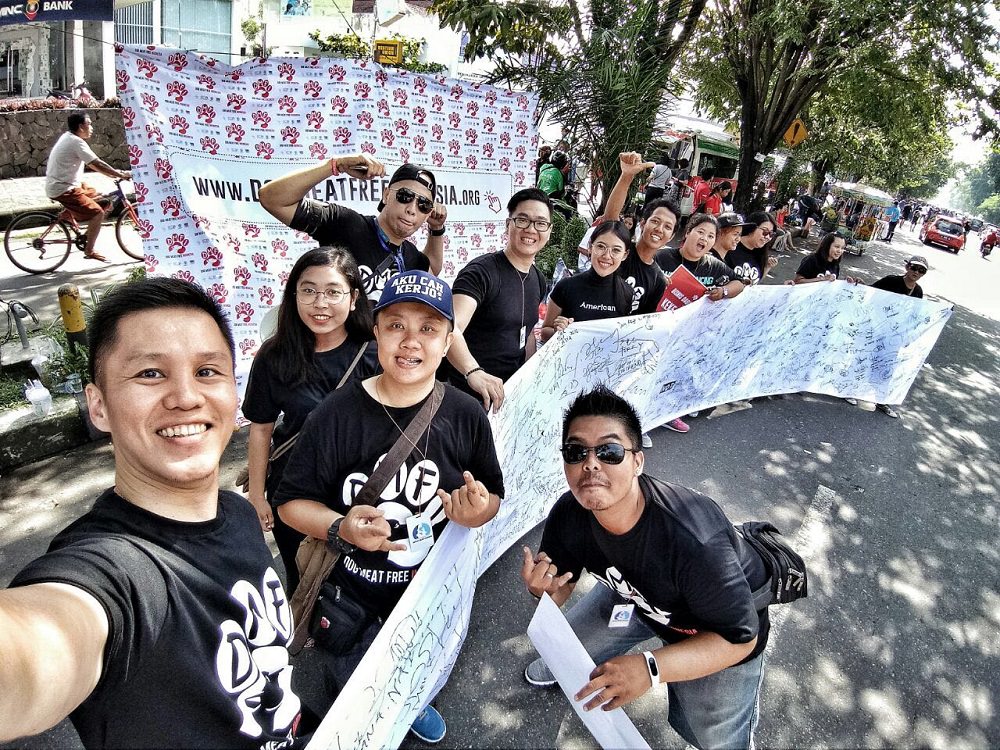 Over 550,000 people from around the world have already signed the petition and local and international celebrities have helped us to raise vital awareness of – and opposition towards – the dog meat trade. 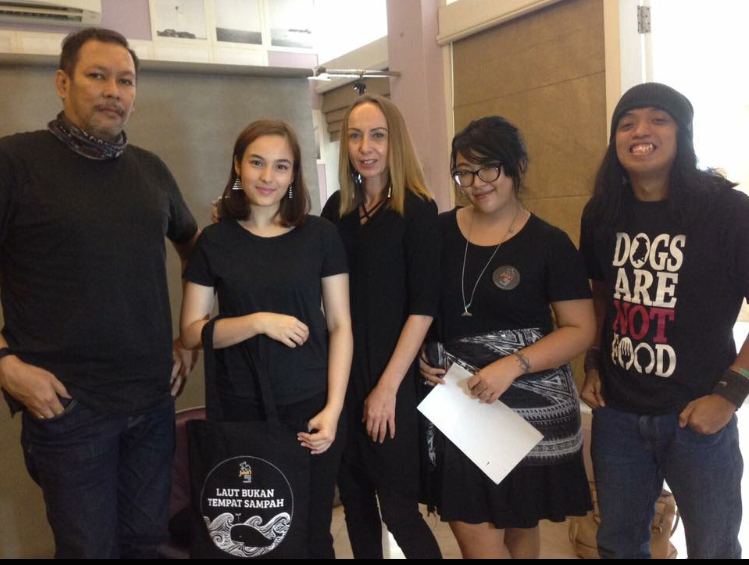 Change is happening in Indonesia. Never before has the practice of dog meat production and consumption been questioned the way it is now.

People are turning their backs on a trade and a practice that can no longer hide behind a defence of ‘culture’ or ‘tradition’. It is quite simply a question of animal cruelty, and a serious concern for public health and safety. 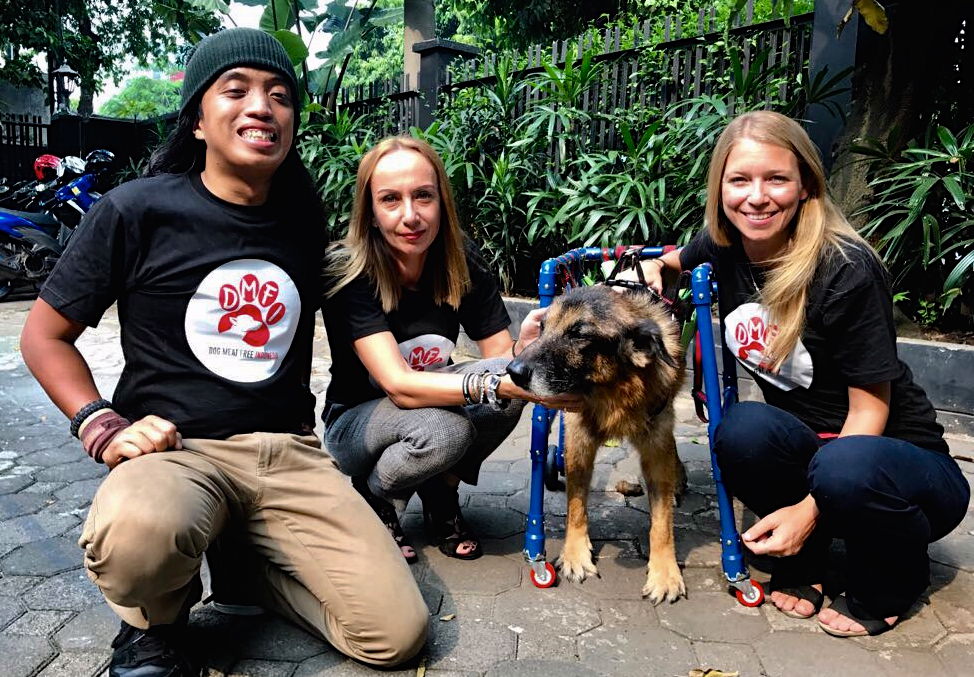 Everyone has a role to play in ending the dog meat trade. I have always had a deep sense of responsibility in leaving the world a better place than how I found it, so that future generations don’t have to take on the same battles we do. And in Indonesia, your voice counts!

Through national and international pressure, we are seeing change.

Already, since launching our campaign, TripAdvisor has removed their promotion of live animal markets in Indonesia; the local government of Tomohon has banned the keeping of live dogs and cats and their slaughter from the infamous “Tomohon Extreme Market”; food companies have removed dog meat from their menus; and thousands of people have taken part in our days of action against the dog and cat meat trades. 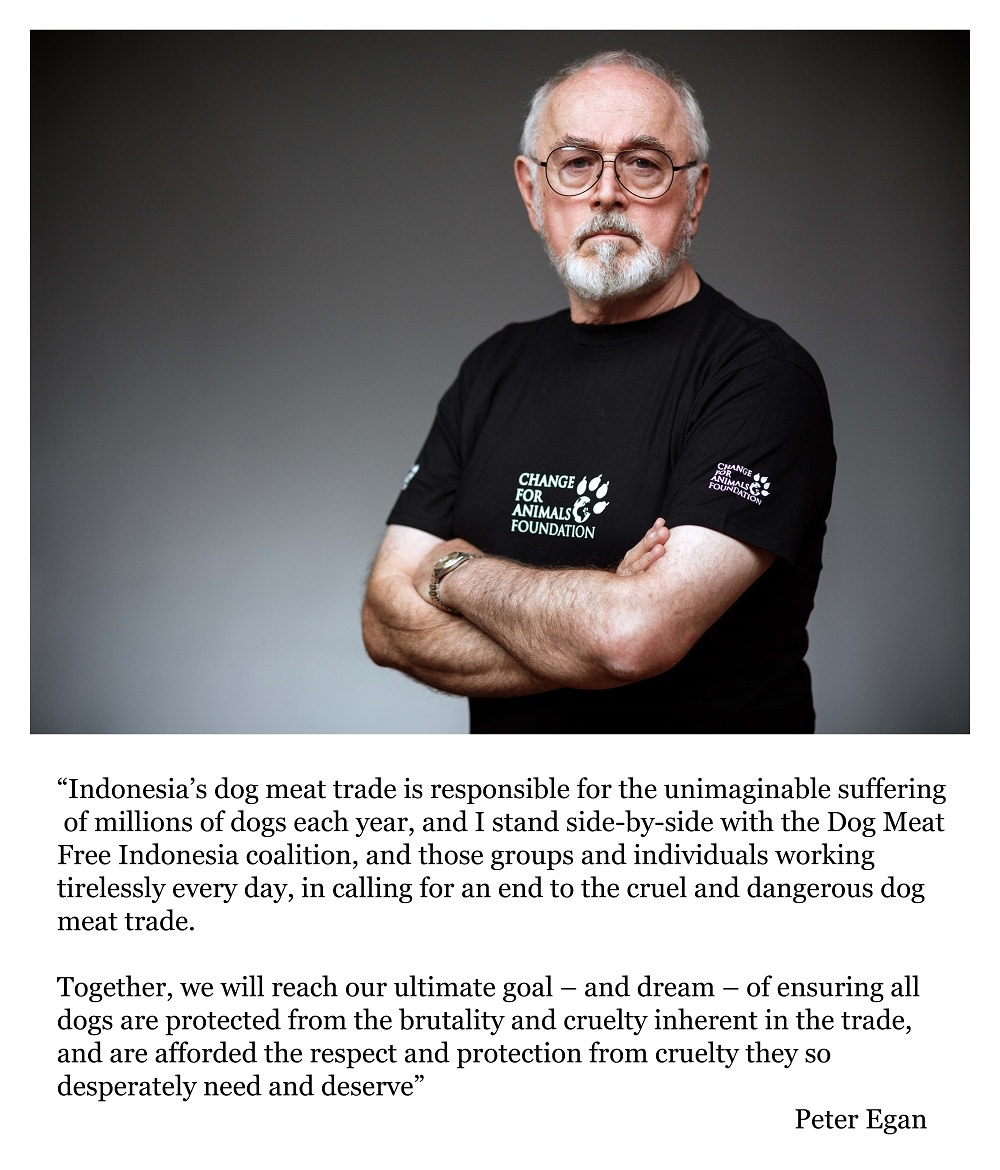 1. Sign the petition calling on the President of Indonesia to ban the dog and cat meat trades: www.dogmeatfreeindonesia.org/take-action

2. - Write a letter (download our template here) to the Indonesian embassy in your home country urging them to do their part in combatting the trade: www.embassy-worldwide.com/country/indonesia/

3. Find out more about the campaign and what you can do to help: www.dogmeatfreeindonesia.org/take-action-options

The government is prepared to take action and it is our duty to ensure this happens because no matter where you are in the world, Indonesia takes note of voices around the world. I know this to be true so wherever you are, please, make your voice heard for tomorrow’s dogs and cats.