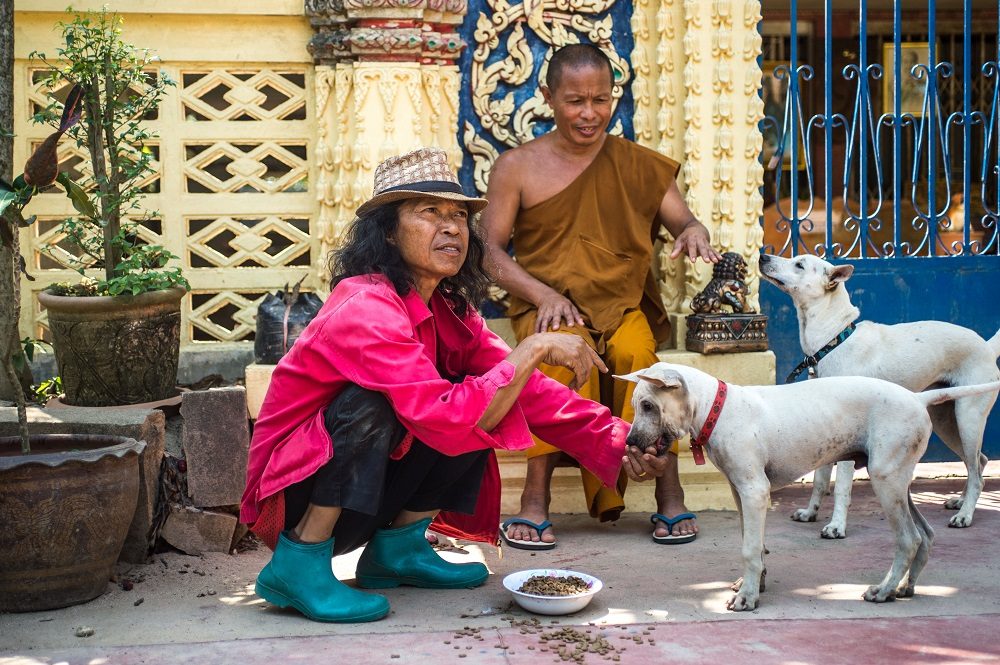 John Thai is a photographer living in Belgium. Every year he sets time aside to volunteer and as a dog lover, animal projects tend to grab his attention.

This year he spent a month volunteering at a dog rescue in Thailand where he put his photography talents to use capturing intimate moments inside the sanctuary between the residents and the people who care for them.

Headrock Dogs Rescue is run by Verity Cattanach Poole and Suthep Samkuntod. John tells K9 Magazine why he chose them.

"I own two Beagles, Jeanneke and Sia and I’ve always had a big affinity towards dogs. Having travelled Asia several times, the hardship dogs have to endure was not something new to me.

"There are many volunteer projects where you need to pay a substantial fee to be able to participate. Some of them are legitimate, some of them are just using the brand 'eco-tourism' as a clever way to make an income without sincere dedication towards the animals. I tend to look out for the smaller organisations who are the ones that need help the most."

John continues, "After some online searching, I came across Headrock Dogs Rescue. While there, I was shocked to hear how few volunteers pass by (knowing that Thailand is a very popular country for backpackers). I guess the majority are attracted by the bigger organisations. Headrock Dogs doesn’t charge volunteers a fee, on the contrary, they even helped me a lot by negotiating with the rent of the bungalow where I stayed for one month.

"At Headrock, Verity and Suthep (Thep) not only dedicate their lives to more than 70 dogs, but are constantly active in several projects outside the rescue as well. Their goal is to provide shelter for dogs in need, heal them and ideally to relocate them to a new home. As you can guess the situation is bleak, but still hopeful at the same time."

Verity tells us, "Headrock Dogs Rescue is run by Thep and myself with the help of Thep’s cousin and a stream of wonderful volunteers who’s devotion and hard work is invaluable. We have just over 50 dogs at our Centre and a constant stream of abandoned puppies. We work ceaselessly to find loving homes for them and Thep being Thai is an invaluable asset with adoptions. Without his work we’d probably have over 900 dogs."

The history of Headrock Dogs Rescue

Originally set up in 2003, it was first known as Hua Hin Dog Rescue (HHRDR) before being renamed Headrock Dogs Rescue in 2008.
Verity and Thep are the third couple to take over the rescue following in the footsteps of an English mother and daughter team and the original French couple.

Verity tells K9 Magazine they were involved in the rescue in 2008 before taking over the management the following year.

She says, "In 2008 the shelter was based 200ks away from where we are now in Hua Hin. We were given 10 days notice of closure by the local government and they threatened to throw all our dogs into their hell hole dog pound. I was the Adoptions Manager and successfully found homes for over 40 dogs leaving 30 of the youngest. Thep and I couldn’t let them be taken by the dog pound so we brought them to Bang Saphan where we’d just moved to."

"We planned to get all the dogs adopted during one year and any remaining would be sent to a shelter who agreed to take them. We successfully found homes for over 20. However, locals started to dump puppies at our site almost every week so our plan to close Headrock Dogs Rescue at the end of a year never finalised!

She continued, "90% the dogs we care for have been abandoned as tiny puppies either on the road or at the Temple where locals know we care for the dogs so the Lung Por (Abbot) of a beautiful Temple nearby contacted us to ask for our help with his very sick dogs and puppies suffering from a wide range of diseases. Death was almost a daily occurrence and he couldn’t bear to see the suffering. Fast forward to 2017 and nine years later we’re still working at the Temple helping to keep the dogs and puppies healthy."

Two years ago Thailand’s Central Government passed an Animal Rights Bill that Verity says is the country’s biggest change in recent times, but sadly she hasn’t seen much change in the attitude of the country’s inhabitants towards street dogs.

"Those who care about them feed groups of street dogs in their area and if they have funds they will treat a sick dog. Otherwise they will call people like ourselves. They rarely neuter the dogs, partly because many of them can’t be caught. Our local Government is not good at providing neutering support but many local Govt departments in Thailand do provide excellent neutering programs.

"Cruelty and poisoning of street dogs is still ongoing but has become much less frequent in our area. As a result of the Animal Rights Bill which passed two years ago, if anyone sees and records cruelty to a street dog they can go to the police who, by law, have to try to catch the culprit who will go to court and often to jail. Before this Bill, the dogs had no legal protection. Also, a number of Thai Facebook Groups have been working tirelessly against dog cruelty and take on cases which have been reported to them."

When you look at John’s photos you can’t help but feel transported to the moment they were taken.

We asked John what message he wanted them to deliver.

"It’s been a common critique that a developing state of a country often predicts a very bad environment for dogs. This kinship is often true and the key problem and solutions lie within the policy of education. I wanted to show that care and compassion don't have to be a luxury that you can 'afford'. Even poor people are able to extend a hand."

People can change the future for Thailand’s dogs

This article shows photos from across John’s photo series but more can be seen on his site. ‘Part 5 – The Old Couple Project’ of this series echoes his sentiments of education and exactly how people can make a difference.

John says, "The Old Couple Project is one of the most beautiful and hopeful moments I came across in Bang Saphan. Verity and Suthep are not only taking care of the dogs in the shelter but they are continuously educating people how to be a dog owner, as most of them do care but simply lack the basic knowledge to it properly. If we want to change the situation for the dogs we need to change ourselves first."

Visiting Thailand? You too can get involved

Verity welcomes volunteers like John. She says, "Volunteers provide fantastic support to our work. We are a husband and wife team with a couple of Thai helpers who feed the dogs and keep the area clean."

"The work can be quite varied but the most important aspect is spending time with the dogs so they can work with them. The first 2 or 3 days the volunteers will concentrate on bonding with the dogs by brushing them or simply sitting with them for 20 minutes at a time. This helps both the dogs and volunteers to be relaxed with each other.

"Many of the abandoned puppies and dogs are in a terrible state. They are covered in ticks and fleas, often have mange or ringworm, high fevers either from wounds or tick fever. We also rescue street dogs that have been hit by a car or motorbike. If these dogs have an owner we cover the vets’ fees and return the dog when it has recovered."

"If the injured dog is a street dog we keep it if it’s life is in danger in its previous place but if it's happy and safe then we return it so we teach our volunteers to handle many minor treatments such as eye cleaning, skin treatments with our homemade natural products, giving puppies their daily vitamins and calcium. Helping with special foods and giving out vitamins is also an area where volunteers can help.

"Shampooing and helping with monthly de-tick treatment is part of their work and may ask volunteers to help with wound dressings depending on their experience in the medical area."

"As all the dogs are free to run around our large compound we don’t need dog walking but if a dog is going overseas we ask the volunteers to help the dog or puppy get used to harnesses."

Verity concludes, "We are always looking for homes for our dogs. We take the puppies to local markets where we have great success with adoptions and we’re members of a local Facebook page which is also successful. We are very strict about the adopter’s circumstances and ask many questions to ascertain if they and their house position are suitable. We always deliver the puppy or dog to their new home and if there’s a problem we bring it back. In the past 8 years, we’ve had 880 puppies and dogs adopted just from the work Thep and myself do. We don’t have an adoption team we are the team!"

Thanks again to John Thai for sharing these special photos with us. To see more, visit www.johnjourney.be and follow the six part photo series. To find out more about Headrock Dogs Rescue and how you can get involved, visit them at www.headrockdogs.org

Do Dogs Understand Time? Apparently So – Here’s How We Know

For decades dog owners have had an inkling that their dog understood the concept of time, but until now there's been no scientific proof....

Dogs Are Changing the Landscape of Lizard Conservation Worldwide

Lizards come in all shapes and sizes and can be found around the world, but prefer to settle in warmer climes. Recently, scientists at...

Why Do Dogs Lick Their Lips? The Answer Is Surprising