The first in a new series of remarkable real life stories from dog owners around the world. Bette Katz is from Alabama, and here is her incredible story of how her dog was brought back from the brink of death many times and now leads a quite fascinating life.

September 11, 2001 was a black day in history for all Americans. For Alabama resident Bette, the day was doubly painful to recall. Late in the evening of that historical day at around 7:00 pm, Jessica, her adored Dachshund's life was about to fall apart.

Jessica was suffering with a condition which devastated everyone who shared their lives with her. A condition that would leave her suffering physical pain at the mere touch of a human hand, surely a most cruel medical obstacle for any dog and loving owner to overcome.

Bette explains:  "Jessica had begun bruising all over her body. Every time we touched her it literally left hand prints. It happened so suddenly. We called our Veterinarian but they were unavailable.  We then called the only 24 hour emergency vet in the area.  He was 45 minutes away.  They were waiting for her.  The doctor immediately took blood.  He already guessed she had Thrombocytopenia.  Thrombocytopenia is a disorder in which the number of platelets (a type of blood cell) is abnormally low, sometimes associated with abnormal bleeding. Causes include poisoning, allergies, or idiopathic." 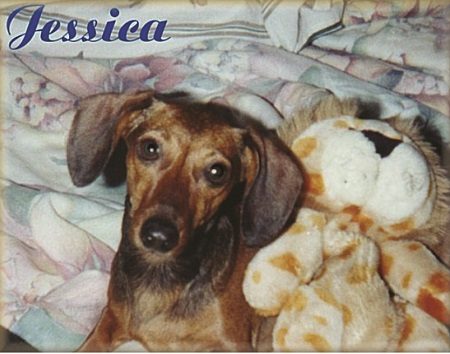 Jessica, pictured one month before she became ill

As can be the case with some dogs, Jessica had a bad reaction to her vaccination injections, but one week prior to her getting sick she was treated for fleas.  Unsure whether the vaccination or flea treatment may have caused the reaction, Bette waited nervously for the results of Jessica’s tests. The blood tests confirmed that it was Thrombocytopenia.  The vet administered some medications called doxycycline and prednisone.

Worried Bette stayed at the vet’s until 2:00 am. The next morning at 7:00 am, Jessica was released and returned to be with her alarmed family.  There was little time to do anything else, as Bette and family had to rush poorly Jessica over to their own vet, once they arrived, the vet, Dr. White took her and administered 100 milligrams  of doxycycline and prednisone, 20 milligrams.  Jessica was barely clinging on to her life, the situation was so serious but she bravely hung on as treatment was administered.

By that afternoon Jessica was stable.  Dr. White had decided she could go home in the morning.  Bette planned on picking her up early, so that her husband could see her before he left town.

September 13, 2001 at 9:00 am, Bette arrived at the clinic to pick up Jessica.  She was crushed to see that Jessica was on two intravenous drips looking startlingly weak.  After asking what was happening, Dr White pulled her out of the room.  He said “There is nothing more we can do!”  They had tried to give her Vincristine-chemotherapy.  Nothing was working.  Bette called her husband and told him.  He rushed to the clinic.  Once he arrived, they allowed him to see her.  His eyes filled with tears.  It was the first time Bette had ever seen him cry.  Dr.  White told him they had exhausted their options.

Then Dr. White had an idea.  He told Bette and her husband that if they could get her to the Auburn Veterinary Hospital, she may have a slight chance but it was less than 50%.  Desperate to give little Jessica a second chance, Bette and her husband didn’t think twice about the costs and agreed to go over to Auburn.

Dr. White called Auburn Veterinary Hospital.  They said they would be on standby.  It took Bette only three hours to make a 4 1/2 hour trip to Auburn, Alabama.

When they arrived at Auburn Veterinary Hospital.  Dr. Bellhom and Dr. MacEntire with their team verified the diagnosis and immediately administered a blood transfusion to buy time so that Jessica’s immune system could react to the prednisone treatment.

They stayed by Jessica’s side until the doctors got her situated.  In the morning on September 14, 2001, the exhausted family went back to the hospital to see Jessica.  They brought Jessica through. She looked so fragile and had not eaten for three days.

The doctor came in and gave Bette and her son the heartbreaking news that Jessica only had a 50/50 chance to live.  Dedicated Bette, fearing the worst told him “Do whatever it takes to save her!”  He said it would be costly and he could not guarantee she would make it.  Defiant Bette was not about to let her battling Jessica die and instructed the vets to proceed with treatment regardless of cost.

On the morning of Saturday September 15, 2001, Bette visited Jessica.  Again, Jessica was brought in to see her loving family but she was fading fast.   A new doctor had been brought onto Jessica’s case, Dr. Wohl.  He proceeded to explain that Jessica still only had a 50/50 chance to beat this and as things stood, she was merely fighting to survive day by day.

The team of vets continued to keep Jessica on fluids, doxycycline 100 milligrams and prednisone 20 milligrams as well as other medication.  She was sent to be x-rayed as well as receiving a bone marrow test and ultra sounds. They determined her stomach was completely black and bleeding internally, but luckily had no sign of cancer.

Once again the faithful family returned to be with Jessica.  She was still getting worse by the hour.  Dr. Wohl told the family that he was trying to determine what to do next to buy more time.  Jessica was not producing enough red blood cells or platelets to stay alive.  Dr. Wohl thought briefly about another blood transfusion but was concerned that it would not buy enough time until Jessica’s immune system could respond to the prednisone treatment.  So he suggested a new solution called oxyglobin (imitation blood).  So new it had just become available on the market.  Everyone agreed to go ahead.

Come Sunday September 16, 2001, the oxyglobin had been administered before the Katz family arrived.  When they brought Jessica in, she seemed so much better.  Dr. Wohl proceeded to explain that she was only feeling better because of the oxyglobin; he was hoping it would buy her enough time for her immune system to react to the prednisone treatment.

Everyday the family went to visit their beloved companion. They always made sure to take Jessica’s toys.   It always seemed to help.  They also tried every day to get her to eat, but with no luck.

On the morning of Monday September 17, 2001, things had taken a turn for the worse. Jessica was at death’s door.  When Bette, her husband and the children arrived the doctor told them that they could visit only for a couple of minutes.  They brought her in.  Bette was shocked at how Jessica had deteriorated.

“She looked horrible.  She was uncontrollably jerking as if having a seizure.  I tried to hold her but it was as if she was leaving me.  I had to let her go back with them.  It just ripped my heart out.”

Explained Bette, “In my desperation I stopped by at the first church that I found.  I went in and asked for the Preacher.  A young man came out.  I needed him to pray with me for God to spare Jessica’s life or at least not let her suffer.  He then prayed with me for Jessica.  To this day I thank him deeply because when I got back to the hotel an hour later, I received a call.  Jessica’s immune system had finally started reacting to the treatment.

She continued the next few days to slowly improve except for one allergic reaction to one of the medications they were giving her which they just discontinued.”

The family stayed at the hotel for seven days, until Jessica was out of the woods.  Then Bette and her son went home. They were both exhausted. Bette continued to drive to Auburn every day for the next five days to be there at 12:00pm for visitation.

“On September 22, 2001 I went to see Jessica.   She was continuing to improve.  Dr. Wohl told me that I would have to administer all her medication every four hours at home.

We had to go every week, then gradually every two weeks to once a month to see Dr.White for CBC.  A CBC is a blood test that actually shows you how many platelets, white and red blood cells you have.  By comparing them you can tell if your body is producing the right amounts.” 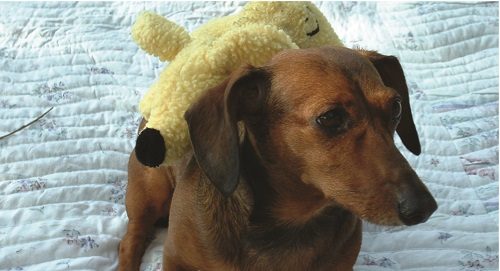 It took months to rebuild her immune system.  For 14 months, Jessica was under continuous medical treatment. She could only go outside in a small fenced in area or play pen.  Bette and family had to continuously bleach the area to make sure she would not get sick.  They had only given her a 50% chance to live, treatment ended January 2003.

“Over three years since she began treatment, Jessica looks like she’s out of danger.  She only receives prednisone if she gets hives (allergic reaction), which has only happened once since her treatment has ended.  She is no longer allowed to receive vaccinations and has a letter stating the vaccinations that could cause her death. 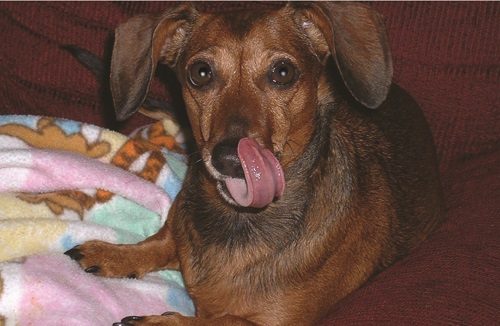 Jessica, pictured in 2005 after her treatment came to an end

Bette concludes, “Since this happened she stays in the safety of our home living a very spoiled life.  We have even recently started a small business in Jessica’s name called Jessicas Designer Pet Apparel, in Toney, Alabama.  You can also visit her website at www.jessicasoriginal.biz"

Have you and your dog experienced similar health issues and concerns? Let others know your stories!