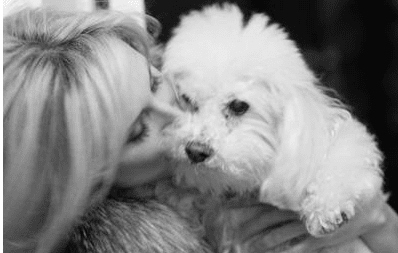 Sonja Morgan is most known being herself on the hit TV show, The Real Housewives Of New York. Her straight talking, fun and hardworking nature has given her a real connection with fans of the show across the globe.

Kim O'Meara caught up with Sonja to find out about two of the most loyal men in her life, her dogs Millou and Marley, and to hear what's next for Sonja as she keeps herself busy with her business ventures, such as her catering and events business, 'Sonja In The City', and her Toaster Ovens through her company, 'Sonja Home Innovative Living'.

Well first there's Millou. He was 18 years old and a Gemini. He was my dog. He was a miniature Poodle and we named him because he had such short legs, when he was a puppy we thought he looked like he had just come out of a meatloaf tin. We got him from a French boutique called 'Le Chien' which doesn't exist anymore. Sadly, my boy died recently but he'll always be my boy and a big part of my heart. He was just the most gorgeous dog.

He was nominated for a Golden Collar award and was up against Uggie. I was so proud and being my dog he was just like 'I'm at home' on the red carpet. It was such an honour for him to be nominated and his last hurrah really.

In fact I've just taken two portraits down from our kitchen. One was of Millou and I and they were both very fine portraits, but it was just too hard to see. I think I was like a lot of people really when I got Millou.

You get a dog in your 20's, you've just bought your first apartment, you feel stable and you think you can take care of someone else so you get a dog and then 17-18 years old, I had Millou, I've gone from being married to  a single mom and so I grew up with him. He loved life, he was just the greatest dog.

We also have Marley, He's named after Ziggy and Bob Marley and he's a Poodle also. We bought him from Edward Alava at The Dog Store in NY where he still goes regularly to be groomed and they're just fabulous there. Marley is more my daughter's dog. She's 11 years old and she's so talented, gets straight A's in school and is so artistic. Marley is just a total rasta dog, so laid back and relaxed – just like her.

We had a really sad time with Marley just after Hurricane Irene hit us last year. It really did so much damage in New York as a state. In fact at the same time Marley got hit by a car and was really ill. I'm a single mom, life doesn't come easy and this house here doesn't pay for itself – apart from child support, I pay for everything myself and I was so worried we wouldn't be able to afford Marley's hospital bills.

The weekend it happened I met Dr. Dominic J. Marino, it was in the Hamptons and Labor Day weekend. At the time we met I happened to be on the cover of a Hamptons magazine. He had his own trauma 1 centre called Long Island Veterinary Specialists and he took Marley free for two months and nursed him back to full health. Without Dr. Marino I don't know what would have happened.

It is funny, I'd often heard people say dogs are just like their owners and I really didn't know this was true until we had Millou and Marley.

Millou had a real wiggle and would have been happy in heels and a tiara – just like me. Marley would be happy just living a bohemian life – just like my daughter.

I definitely grew up with a menagerie of pets. I've got a rescue kitty now, a very beautiful and neutered cat. Growing up we had St Bernards, Labradors, Jack Russell Terriers.

When I was married we had Labradors and Jack Russell Terriers. My ex-husbands mother had Labradors in the tens, so we both had dogs in common.

You're a huge supporter of animal rescues. Being in the public eye, do you think it's almost a duty as well as a privilege to be able to show your support for causes close to your heart? Tell us a little about some of the campaigns you're currently involved in.

I've been involved in philanthropic work for years and really do as much as I can for the causes close to my heart. I'm honored to be involved and in fact I was honored in 1991 for the work I'd done to that point. I really support the arts, animals, children and the LGBT – they're the main areas I'm involved in.

Marley and I do fashion shows for the ASPCA and do whatever we can to help them. I really believe that you have to nurture, we need these charities for all the good they do.

I'm also on the board of The American Friends of Blérancourt which is the only French American museum in the world. Blérancourt belonged to Anne Morgan, the daughter of JP Morgan (my ex-husband is John Adams Morgan).

The Real Housewives Of New York has become a huge success and we first saw you appear in season 3, although you've been friends with some of the ladies for years. What made you decide to open yourself bare almost to the viewers by appearing on the show?

It was a real leap of faith to be honest. I used to think reality TV was scary so when I was originally approached about being involved in 'Manhattan Moms', I had to think about it. I had a 5 year old daughter, I'd just split from my husband and I didn't know what the show would turn out like – there were too many 'what if's' so I said no. My daughter comes first, as always, and I thought there's too much unknown and I was a single mom so it would have been a big commitment to be involved at that time with all the 'what if's' surrounding.

Then I saw how well my now co-stars were doing and the opportunities that presented themselves for their children, aside from all the drama on the show, there was a lot of doors opening and things happening for their children that was just wonderful.

Financially, I thought 'ok my divorce settlement isn't coming, I need to make some money to cover the bills and provide for my daughter as a mom' and seeing the girls all doing so well from the show I made the call. I had legal bills coming in to fight all through my divorce, I had the movie deal which went bad so it was all happening at once.

On top of that I thought it must be great to see moms doing so well for themselves. So I called the producers of 'Manhattan Moms' and they told the new production company and they called me back straight away. Literally the next day I had the cameras set up and we started filming.

The show's now syndicated around the world and I can't go to Rome, London, Paris – anywhere without people recognising me from the show which is quite amusing.

Your first series, season 3, had a lot of controversy with bickering, arguments and ongoing feuds between Bethenny, Jill and the Kelly saga. Did you ever have doubts about returning for season 4 or beyond?

I went into RHONY thinking remember who you are and what's important to you but there is a lot of drama on the show.

Finish the following sentence, my dogs are...an important part of our family. They make us laugh and they make us cry and life wouldn't be the same without them.

And finally, this is always a tough question and often requires a fair degree of thinking time but….If Millou and Marley had the ability to speak and answer one question and one question only, what would you ask them and what do you think that they would say?

I think if I were to think about what I'd like to have asked Millou I'll get choked up. In the case of both Millou and Marley I'd really like to think I'm in tune with them so I already know what their needs are.

Dogs are awesome, aren't they? And yet just when we think we've got a handle on how brilliant they are, they line up to...

Some dog adoption stories stay with you and deserve to be shared and celebrated. Gracie's is one of those. Her triumph over adversity to...

For most people having a dog changes their life. But this is a story that’s extra special because of an extra special dog. Sarah...