Rachel Shenton is best known for playing Mitzeee on Channel 4's soap, Hollyoaks. Having made a splash on our screens playing Mitzeee in 2010, Rachel has become a much loved character playing a huge role in many of their leading storylines. Before taking up the role, Rachel led the way playing a part in a web TV series 'Sofia's Diary' and filmed a leading role in a new vampire web drama, Blood and Bone China.

Kim O'Meara caught up with Rachel to find out about her love of Mitzeee, acting and growing up with dogs.

Well, I have a long-haired white German Shepherd called Cassie, she's a 4 year old girl. She's a rescue dog. We adopted her when she was 6 months old from a German Shepherd rescue. She'd been neglected and very bady treated, she was a real bag of nerves when we first brought her home and it took some getting used to knowing how to handle to make her feel at home. She was so scared of any noise - the hairdryer, doors closing – anything really.

It took about 18 months before she got back on track. It's only in the past few months she's started to bark – before that she didn't make a sound. It's so funny, normally we'd have told our other dogs 'Shut up, it's only the postman' but when she first barked we were all smiling that she'd found her voice.

She's still very much a baby though, I think we've mollycoddled her because of what she went through before we adopted her, and in trying to get her to come out of her shell. 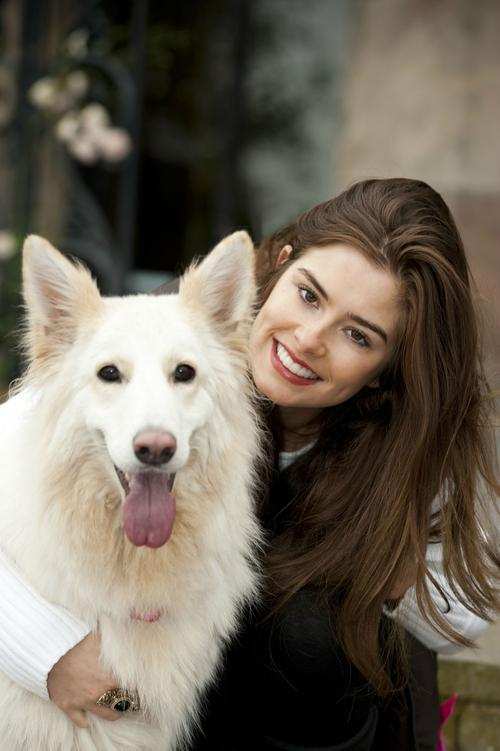 She won't even go out in the rain, we're always saying, 'Come on Cassie' and she looks at us like, 'well if you like it so much you go out!'

We've never been without a dog and when we decided to get another we went to a breed rescue and asked them to let us know when they had a dog under a year old in their care. They knew we had breed experience and told us about Cassie. I was working so my mum went to meet her and said she couldn't leave her, so that was it!

Being long-haired she's always been very fluffy, erratic – but fluffy! She's great, we wouldn't be without her.

You've been playing Mitzeee on our screens since 2010 in Hollyoaks, what do you love most about the character you play and did you think when you first started she would grow and be involved in as many of the major storylines as she has?

I really love playing Mitzeee. She's great, she does and says things people want to say, but daren't. She wears her heart on her sleeve and you have to give her credit for that.

You've said you're really happy where you are just now at Hollyoaks and it seems like the cast have such a bond so we can see why. Before you joined the cast, you worked on Blood and Bone China, a new vampire web TV series. Tell us a little about that.

I play Anna Fitzgerald and it's great to play characters that are so different, in Anna and then Mitzeee. I think you get into this business to play as many different characters as possible, it helps you grow.

Being a web TV series is great aswell, in the time of a recession with finances as tight as they are in the TV and film industry then it's a great way to get the word out, get people talking and watching.

A few years ago I was part of 'Sofia's Diary', it was a popular web TV series ultimately picked up by Five, so I think web TV is just moving with the times.

Do you have a motto that you live your life by? What would you say Cassie's motto might be?

I'm not really one for mottos but I do believe in make the most of every day and every opportunity and there's a saying 'I'd rather regret the things I have done than the things that I haven't.'

If you were to swap roles with Cassie for a day, how do you think she'd cope being you and what would you most love about being her?

I think I'd love to be her though! Who wouldn't love to be fussed over, fed and just loved to pieces.

Jamie Lomas – (Laughs) Well I think he'd be a Bulldog. He's quite muscly and his bark is worse than his bite. He can be quite fiery, when he has something to say he can seem like a bull in a china shop, but he's lovely.

Jennifer Metcalfe – This is quite hard! I think she'd be a chocolate Labrador, she's loving, glamourous and likes her creature comforts.

Alan Carr – I'm trying to think of a fun breed. I think he'd be a Boxer, they're very lovable and there's more videos of Boxers on trampolines on Youtube than any other breed. Also, they have a look that's almost a squint, so I can see them with glasses on and Alan wears glasses doesn't he.

Big dogs or little dogs – I think I'm definitely a big dog girl. I like a proper cuddle and I think I like a dog to be a dog so as much as I love all dogs, I do prefer big dogs.

Pedigree dogs or x breeds – I don't have any preference, I love all dogs. To me it's more about their personality.

Days off or days at work – I love to work, but I think all work and no play... well, you know the rest!

Describe the last time you laughed outloud because of something you saw Cassie or another dog do.

Oh this is a tough one! Okay, well first of all I'd have to choose Marilyn Monroe, then Martin Luther King and thirdly Barack Obama. It would be a good knees up!

TV show – I'm a big fan of Outnumbered, but I also love An Idiot Abroad – that makes me laugh.

Book – I'm reading Revolutionary Road by Richard Yates. I'm nearly finished and have really enjoyed it. I've avoided the film so far, I always try and read the book first rather than spoiling it.

Film – I recently saw 'Arthur Christmas'. I was lucky enough to go to the premier and it was brilliant!

I think it's the unconditional love. You can get home after having any kind of a day, long, stressed out, whatever it might have been and they greet you like they've not seen you for weeks with this overwhelming abundance of love.

Finish the following sentence, my dog is... brilliant.

And finally, this is always a tough question and often requires a fair degree of thinking time but….If Cassie had the ability to speak and answer one question and one question only, what would you ask him and what do you think that he would say?

And last but not least, Tony Blake/Flat One Photography & Rookery Hall Hotel & Spa in Nantwich, Cheshire for hosting us!