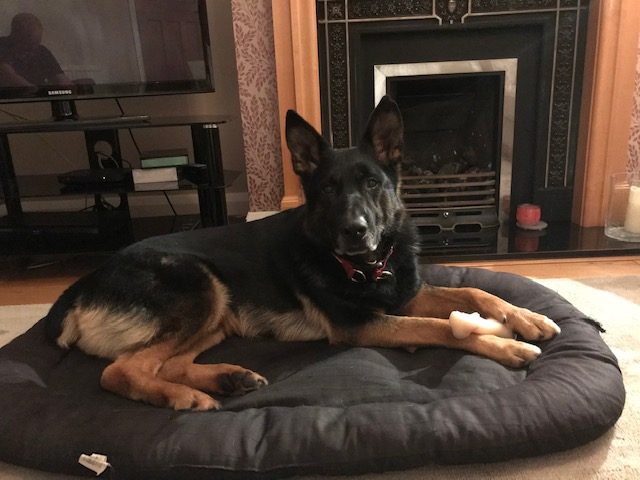 Meet Bacca. He’s a police dog with a big heart who was stabbed eight times last year while protecting his handler, Mike Davey by disarming a violent man carrying a large knife.

Mike has no doubt Bacca saved his life that night. His wife, Jo, tells us how she heard the news and explains how the incident changed their lives.

“There was nothing unusual about not hearing from Mike whilst he was at work, we have been married for 24 years, so I have learnt to live with him not coming home on time or not receiving a message to say he will be late, so there was nothing special about this day. That was until I phoned him.

“I knew straight away there was something wrong, your sixth sense or whatever it is just kicks in. He said, ‘Don't worry, I'm fine but Bacca and I have been stabbed’. My mind obviously went into overdrive, you always dread hearing those words but naively you think it’s something that will never affect your nearest and dearest.

“Over the years there were lots of things he didn't tell me because he didn't want me to worry but I always found out! He told me that he had been stabbed in the hand and that Bacca had been stabbed multiple times but they were both ok and he would be home soon. It wasn't until later that I began to hear more details of the attack, that they had been called to an incident in Bromyard in Herefordshire after reports of a man smashing shop windows. Mike gave me a watered-down version of it I suppose because as always he was trying to protect me, but subsequently, the details of this horrific knife attack came out.

“When the police car pulled up on our drive and Mike got out I just hugged him, I was so relieved to see him and Bacca in one piece. He gave me some sporadic details but over and over again he just kept saying how Bacca had saved him and how he thought Bacca was not going to get back up when he had been stabbed. He couldn't believe how Bacca had kept going back to get the man even after he had been hurt.

“When I first saw Bacca he was like a different dog, gone was this bounding mad, furry thing that was always so full of energy and life, instead, in his place was this forlorn-looking animal with wounds to his face and one dropped ear, where it had been slashed through.

Bacca after being injured

“About an hour later Mike and Bacca were sat out in the garden, Mike was just sat there and Bacca had his head on his lap. Mike often talks about this moment with Bacca and how he felt as if Bacca was saying 'Well, that was a lucky escape dad'. The bond between them at this particular moment in time was cemented forever I think. I didn't want to come between them so I just watched them sitting there together for a long time.

The stabbing changed everything

“Mike has been in the Police Force for the 24 years that we have been married and prior to that, he was in the Army. It's fair to say that if you ask anyone, Mike has always had his fair share of 'incidents' at work, particularly since he has been a dog handler. In fact, it became a bit of a standing joke, to be honest - a few operations, lost fingers and dog bites to name but a few, but he was always ok afterwards, so it did become part of the job.

Bacca as a young police dog

“One big thing was that Mike loved his job, nothing deterred him from going to work and he adored all his dogs. I also knew how brave he is, even if I'm biased, and that he would never turn away or give up on anything regardless of how dangerous it was. Of all the things he had faced before, he could never wait to go back to work.

“This time it was different. Mike went back to work too soon and maybe with some inevitability he became unwell. One of the most poignant things he said to me the day it became apparent that he needed more support to help him back to work, was that he had gone to get ready for work that day and he didn't want to put the uniform on. This was a massive admission on his part and finally, he was able to admit that he was struggling and we were able to get the help he needed with the support of the Police.

“So was it life-changing for us - definitely. For me, it was life-changing to see him go through it. He’s a proud man and he found it difficult to ask for help and admit that he needed it. He felt that he should man up and deal with it and that it was a sign of weakness.

“The incident made me glad that his retirement was not far off so he wouldn't have to go through it again but I didn't want him to end his career like this.”

Swapping life as a police dog to family pet

“Bacca is still youngish but there was never going to be a time when Mike was going to not keep him when he retired.

"He has been Mike's dog for the last six or seven years, working with him each day and living at home with us but he was never allowed in the house. Bacca was Mike's dog first and foremost. In the morning as soon as Bacca saw Mike in his police uniform he knew it was time to go to work and he loved it!

“Mike has just started a new job, three days a week working as the Centre Manager for Hereford retired armed forces veterans and so Bacca's new life at home has started. Initially, we started to bring Bacca into the house for half an hour or so each evening so he and we could all get used to the change.

“At first he couldn't really settle and everywhere Mike went so did Bacca! We took it slowly, little fusses here and there until he began to show an interest in the rest of the family and not just Mike.

"We gradually increased the amount of time he spent in the house and now we struggle to get him out to sleep in his kennel at night. He has taken very nicely to trying out all the beds in the house and found himself a comfortable spot on the sofa, although I'm not quite ready to share my bed with a German Shepherd just yet!

“To see him begin to adapt and become part of our family is fantastic. He is such a loving dog and we feel so lucky to have him. In fact, there is only one person who isn't too happy with the new arrangement and that's Tilly, our Jack Russell Terrier who is very used to being Queen Bee and not sharing! As small as she is, there is still only one boss!

“Bacca's average day now usually starts with a walk with his dad and Tilly, which gives Tilly the opportunity to bite Bacca's ankles whenever she can and Bacca to collect as many stones or bottles as he can. Yes, Bacca's favourite pastime is bringing stones, pebbles or bottles of any size or description into the house to chew!

“Walks are followed by drinking copious amounts of water which he manages to get all over the kitchen floor, which drives his dad mad! Anytime is snack time and Bacca has developed a penchant for mini sausages which is costing me a fortune! He now stays in the house for most of the day depending on what the family is doing but it’s fair to say that our home is now Bacca's home, access all areas!”

In this article:Featured, Issue 128