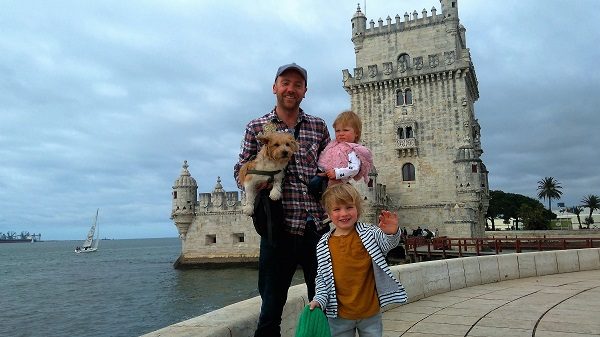 If you've ever wondered what it might be like to holiday abroad with your dog then fear not, you're not alone. The decisions can be endless, from how you travel to your destination, to where you stay and what you should visit to make the most of your trip.

Last month we shared the journey of dog lover and travel writer Paul Wojnicki as he set off to discover all Portugal had to offer to dog owners holidaying abroad. This month we pick up where we left off...

When it comes to finding dog friendly camping companies it’s hard to beat Eurocamp. For a start, they are one of only two UK companies to allow dogs in their mobile homes, and they have - by some distance - the greatest selection of sites in Europe; with literally dozens and dozens of 'parcs' spread across the continent.

Indeed there are so many parcs that it’s probably easier for you to visit the dog section of their website for inspiration. But for us, there was only one camp we had our eye on this spring as we were exploring a country we’d never previously taken Falco to.

It’s hard to believe that Eurocamp’s Guincho site is less than 30 miles from the heart of a major European capital, it just feels so remote, tucked behind massive sand dunes on a wild stretch of coast in the Serra de Sintra national park. But for us that’s a massive bonus because the area around the site remains virtually untouched by development and there are no problems taking Falco to the beach or on the sand dunes.

Even in the height of summer Guincho Beach, pictured below, has a reputation for being uncrowded and rugged and we are not disappointed when we arrive, sharing the huge beach with just a dozen or so surfers and a fellow dog walker here and there. Above us, twenty miles to the west looms a mountain that I’ve been told is the location of the magical town of Sintra, home to dozens of real castles and fortresses.

'If the mountain is covered in cloud, don’t even bother travelling up there,' our rep, Eddie informed us when we arrived on site that afternoon. It looks pretty clear today but we decide to leave it for another day and stick to the sand dunes instead.

The following day we look to the mountain and note that the top isn’t visible, so we drive three miles down the road to nearby Cascais, where the beaches and waters are calm and sheltered and where we find a completely deserted beach in the back garden of a 19th century stately home no less.

It’s hard to believe that we have the place to ourselves but then stately homes are in plentiful supply in the elegant resort town. So we spend the whole day with a beach to ourselves, safe in the knowledge that Falco won’t be disturbing any other families; though we later discover that dogs are also allowed on all the town’s beaches at this time of year as well.

The next four days are spent touring the local beaches and it almost seems a shame when the mountain decides to expose its peak on day five, we are having so much fun that dragging Falco and the children up to a historical town feels a little unfair, but we’re determined to see some of the local history and not just beaches; and family holidays are about compromise after all.

We needn’t have worried about Sintra being a little boring, as one of the first things we see when we park the car is an Indian style Tuk Tuk.

'Are dogs allowed on board?' we ask.
'Of course,' the driver says. 'What’s his name?'
'Falco,' I smile, happy because the true barometer of dog friendly is a company (or Tuk Tuk in this case) being interested in your dog.

So we hop on the back, strap ourselves in and are whisked up to the top of the mountain in less than ten minutes, with laughter and smiles all the way up. The driver even takes time to let Falco lick him for a photo.

Disembarking, we purchase tickets for Harrison and his mum to visit the Moorish castle while Falco, myself and 1 year old Ella - who needs a sleep - walk the stone path that leads to the summit.

Once at the peak of the mountain, we’re able to look across to the Moorish castle where Harrison is no doubt in his element on the ramparts. Below us we see the Atlantic and a myriad of castles dotted across the mountains, with the multi-coloured Pena National Palace being the most prominent and picturesque.

We spend the next few days enjoying the beach and dunes at Guincho and relaxing on the parc, where the kids and Falco have made lots of friends. It seems that every other holidaymaker has brought along their four legged friends with them- some for the entire winter because Lisbon rarely drops below 16 celsius, even in January. Indeed there are plenty of hardy souls that have wintered here in tents!

The great part about this is that there’s no shortage of tips and information on how dog friendly the transport and attractions are, which is very; in contrast to neighbouring Spain who don’t seem to allow dogs anywhere.

We save the historic centre of Lisbon until the last day of our ten day stay, primarily because we have to vacate the mobile home by 10am and it being a Sunday we’ve been told that parking will be free and plentiful.

Pictured above, on the beach at Cascais near Lisbon

The city is beautiful and packed with monuments both old and new, while virtually every form of tourist transport seems to be fun and dog friendly, from the historic trams that ply the cobbled streets and hills of the old town to the ornate 19th Century Santa Justa Elevator, that saves the legs of tourists and local alike when moving between the low town and high town.

Pictured at the Santa Justa Elevator

We aren’t allowed to ride the bright yellow HiipoTrip- an amphibious truck that takes in land and waterside attractions but that’s because Ella isn’t old enough, not because Falco isn’t welcome.

We ride another Tuk Tuk instead along the waterfront to the sister bridge of San Fransisco’s Golden Gate and spot a huge Rio-esque statue of Christ looking back at us at the far bank. It’s a little confusing and for a brief moment I’m not sure whether we’re in California, South America or Asia.

And then I remember, we’re actually in Western Europe and on our way to discover more of Portugal, but that’s a story for next month...

In This Issue... Talking Point: Could Scientists in the US Be on the Verge of a Breakthrough to Slow Down Ageing in Dogs? Real...

Harriet Lee is a British Swimmer and part of Team GB heading to Rio's Paralympic Games. Having overcome many hurdles along the way, Harriet,...

Very often it is assumed that those who are 'dog mad' as adults must have grown up around animals. But this isn't always the...

Would You Like to Review Panasonic’s Smart Home Monitoring System With K9 Magazine?

K9 Magazine is reviewing the Panasonic Smart Home Monitoring System and we want YOU to join us. To celebrate Summer in a carefree way, like...