Nicole Barber-Lane is best known for playing matriarch of the McQueen clan on Channel 4's soap, Hollyoaks, known for speaking her mind and being fiercely protective of her family.

With explosive storylines on-screen, Kim O'Meara spoke with Nicole to hear all about them and find out about two of the most important parts of her real life family – her two dogs.

I have two dogs, Sam and Teddy. Sam was my first ever dog, he's so gorgeous and we rescued him. He's a Terrier cross, with a bit of Jack Russell and god knows what else, he's been with us for 6 years now so we think he's 9, maybe 10 years old. Teddy's just turned 1 year old.

We decided to get a second dog after we'd taken Sam to the vet. At Christmas he'd been running around , as he does – full of beans, when he suddenly started limping and crying. We were going to my sisters for Christmas and she said I think it's his cruciate ligament, so we got him to the emergency vet to be checked. The vet told us because of the size of him, we would need to operate but his leg could be saved, so we did our research to find the right vet to operate because it's a big thing for any dog owner isn't it, if their dog has to have an operation, you just want what's best for them.

The vet we found was brilliant and he suggested we get a younger dog for company for Sam, someone he could run around with to keep him active as he got older.

In the waiting room of the vets we saw a sign with dogs for sale so we went to see the puppies and we took both home. The lady told us we could take both to see who best fit with the family and who got on with our two cats, Mohito and Tom. We needed someone who Sam and both cats got on with so no one was put out. I had wanted to keep both in truth but sadly the other boy couldn't cope being around the cats, but Teddy got on brilliantly. He and Mohito are particularly good friends.

I think Teddy coming along means Sam gets a bit of a break from Mohito in truth. Tom's always acted cool around him, but Mohito always wanted to play, so Teddy's taken up that role happily. 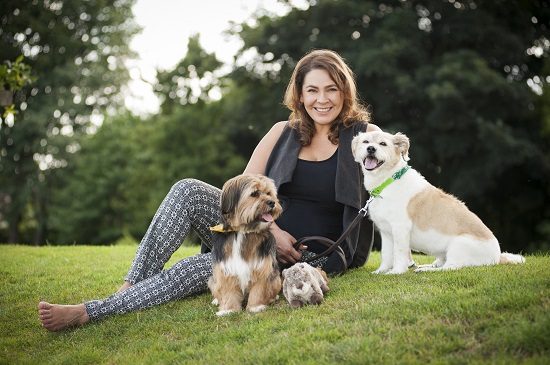 We didn't have pets growing up, I've always been allergic to dogs and cats so couldn't have them. My sister has two Giant Schnauzers and she said to me 'why don't you put some of their hairs under your pillow', I just said 'shut up you weirdo', as you would, and because I was staying with her, to begin with I couldn't breathe being around the dogs, but the more I was, the better it got.

(Laughs) My sister, the forceful woman that she is, has an open holding with cats, dogs and a horse, had two kittens and offered them to me saying that because they were young and small, my allergy wouldn't be too bad, and I'd get used to them like I had with her dogs, plus they had to be kept together so I had to take both. Knowing I'm a soft touch she spun me a line about what she'd do if I didn't take them, so I did. And she was right.

Soon after when we'd moved and we had fields around our home, I kept thinking they'd be perfect to walk a dog in.

When we got there we saw these poor dogs, to begin with we saw these huge breeds. Dogs people had got, without realising what size they'd grow to, and now these poor things are rescue because their owners didn't realise or couldn't cope.

The further we went down the line, we got to medium sized dogs, then the small ones and I knew I wanted a small dog, one I could cope with and handle easily. Finally we saw Sam. He was a scruffy dog. Like Benji, the dog you saw for a time on all of those TV adverts. He was just sat there shaking, not barking. Just sitting and shaking from head to toe. I thought oh my god, that poor dog.

So I said to Liam and my son, who was also with us. I want to take him for a walk. So we asked and managed to take him out, and found out a little more about him. He had had a disabled owner before and the rescue wasn't 100% sure of his age, but he was a really sweet boy.

Afterwards, all three of us said we couldn't stop thinking about him so we went back the next day and as we got to his kennel he started wagging his tail, he'd remembered us and so it was then I knew we had to have him, he was our dog.

You've been playing the head of the McQueen clan on our screens since 2006 in Hollyoaks, she's central to so much on the show at the moment – what can you tell us about what's coming up?

Well, I'm not really sure how much is out there without wanting to spoil any surprises. But Myra gets clonked on the head, initially thought of by an armed robber, but in truth it's Dr Evil AKA Dr Browning.

It gets more interesting after that for Myra and Mercy.

Claire Cooper, who played your daughter Jacqui on the show, also recently left. What would you love to see happen next for the McQueens, the next era almost? What will you miss most about the show and Myra herself?

(Laughs) Well I think I'll stick to what I do best – acting. I'd love to see what Bryan (Kirkwood) does next, he's been brilliant for me personally and the show since he came back. I've always loved working with his storylines and scripts and I think the passion he puts in shines through.

All of the awards we received at the latest soap awards shows that. I think Hollyoaks can sometimes suffer from it's old image of being just a teen soap, models walking round who just happen to be on a show. But we have a cast of amazing actors here now, I enjoy watching the show myself. I haven't always watched it in truth, I don't watch a lot of TV generally, but I find myself being gripped by the storylines and then when I'll see whoever it might be on set I'll be a little cautious of them because of what I saw on TV, or I'll temporarily forget when I'm watching that I know how something ends.

They really are brilliant to work with and I think what I'll miss most - everyone here. From the production office, to the cast, to the office staff, everyone behind the scenes. There's no hierarchy with Bryan as the daddy producer. And me as the mummy.

Everyone is treated the same and it's made for a brilliant atmosphere to work in.

Do you have a motto that you live your life by? What would you say Sam and Teddy's mottos might be?

I don't have a motto as such, I do live my life by the philosophy that people rarely do something to upset you. Find a solution to the problem, don't pass blame and move on. 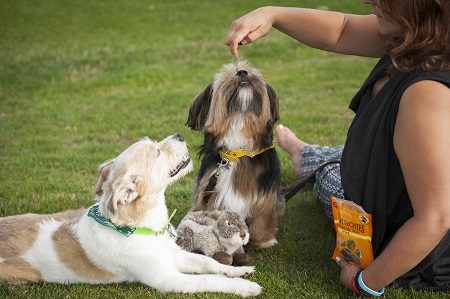 For this question, we ask our celebs to match up the following people’s personality to a breed of dog, for example, Winston Churchill = Bulldog or J.Lo = Afghan Hound, Frank Bruno = Boxer etc. In honour of the Hollyoaks McQueen clan, if your following cast mates were breeds of dogs, based on their personalities alone, what type of breed do you think they'd be...

Carmel (Myra's daughter played by Gemma Merna) – A well groomed Poodle, with a pink collar with diamonds in!

John-Paul (Myra's son played by James Sutton) – I think he'd be a Greyhound, because he's lean and sleek.

Mercy/Mercedes (Myra's daughter played by Jennifer Metcalfe) – Definitely a Cocker Spaniel, pretty but can have a temper on her!

Theresa (Myra's niece played by Jorgie Porter) – I think she'd be a Miniature Schnauzer, I've no idea why!

Phoebe (Myra's grand-daugher played by Mandip Gill) - I think she'd be some kind of pretty cross-breed.

Describe the last time you laughed outloud because of something you saw Sam or Teddy do.

Yesterday during your photoshoot, but they make me laugh all the time. Sam does this thing where he'll ask you to scratch the end of his back near his bum and he'll arch up and down as you do it. Teddy's just funny naturally. I'm always laughing because of them. 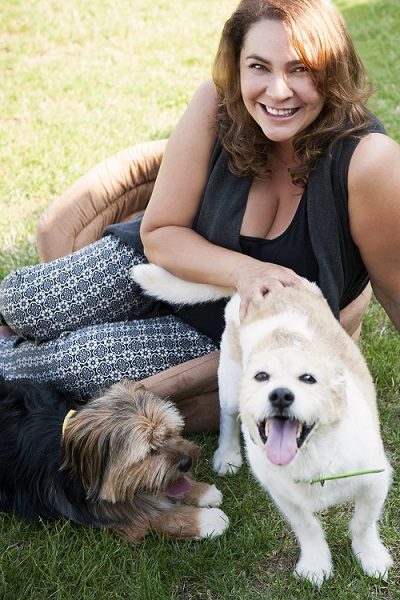 You adopted Sam from a rescue and we happen to be speaking during National Dog Adoption Month, if you could sum it up, what do you think is the best thing about adopting a dog?

And finally, this is always a tough question and often requires a fair degree of thinking time but….If Sam and Teddy had the ability to speak and answer one question and one question only, what would you ask them and what do you think that they would say?

My husband Liam says he'd love to ask them 'who do they think is the boss' and he thinks they'd reply 'Nicole'.

Pets-Pantry.com – For Their Designer Dog Beds

And last but not least, Photographed At Winwick Community Centre by Tony Blake