Nick Pickard is best known for playing Tony Hutchinson in Channel 4's soap opera, Hollyoaks. The last original cast member on the show, he has had some very memorable storylines over the years with new exciting ones ahead - so stay tuned!

Kim O'Meara caught up with Nick in amongst his busy filming schedule to find out all about his dog, Reggie.

Tell us about your dog, Reggie - we'd like to know everything about him!

Reggie's an 8 year old Dachshund, he's our family dog. We actually got him for my mum when we all left home. We thought we were all leaving and she'd have this big house on her own, so we picked him for her.

At the time when we brought him home as a puppy she said 'why have you got me a dog' (laughs) but he's such a brilliant dog, he has a fantastic temperament and he's loved by everyone.

He's fantastic with my daughter who's 15 years old now as well as all of the grandkids which come around and play with him pulling his ears and all sorts, and he just goes along with it. He's so friendly, we couldn't wish for a better dog than Reggie.

We had dogs growing up, we had Peter, a yellow Labrador, and Suzie, a Westie, so we've always had dogs and after those we got Reggie.

I'd love to have a dog who could stay with me at my home when I'm filming, but with my hours on the show I know it would be unfair. I very often start at 7-7.30am and finish around 8pm, so I think it would be unfair on a dog. With Reggie, we know he's with my mum at our pub in London so he has company all of the time. 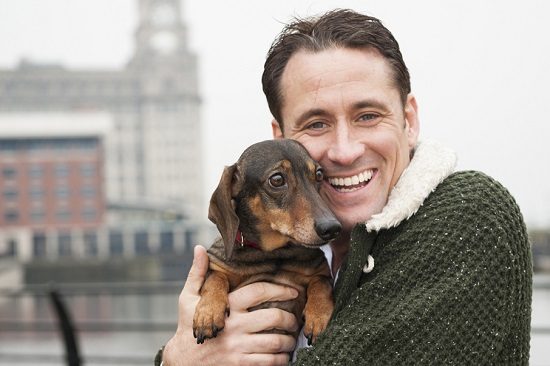 You're really 'Mr Hollyoaks' playing Tony Hutchinson on the show and the only original cast member. What do you enjoy most about playing Tony and what's ahead for him? Are there any similarities between you both?

Well Tony's got some really exciting times ahead but I can't tell you about them yet – sorry. Stay tuned though is all I'll say.

I first joined Hollyoaks when I was 19 years old and I'm now 37, every year I expect it to end – hope it doesn't – but expect that it could, and every year they keep asking me to stay for another year, so I'm very lucky. I don't know when I became one of the older cast members - I'm now on the 'over 25's' cast list section!

It's a great buzz and when the older characters come back, Sarah Jayne Dunn was back fairly recently and Gemma Bissix is here for a short time just now, it's a lot of fun.

Tony's had some interesting times over the years. They do say they sometimes try to pick parts of your personality out to put into the character but I think we're so different, I don't think there's any similarities between us. He's great to play.

Hollyoaks has evolved so much over the years, from it's steady flow of new cast members and families to storylines, to developing a real key role in the lives of young adults. Would you say this may be key to why it's been getting a lot of recognition over the past few years?

Our boss, Brian Kirkwood, is the most passionate producer. I've enjoyed working with everyone on the show so far, but there's something extra with Brian.

He's so driven, he did a three year stint and at the end of it he was grey. He came back last year and I think if you have someone at the top so driven to succeed, who puts everything into it then the end results of success and awards follow.

Back to dogs! What would you say Reggie's motto might be?

Reggie loves his sleep so I think his motto would have to revolve around that. I live with one of the girls on the show and this week I said to her if she's up first to just let Reggie out. She got up and couldn't find him, called me in a panic and he was still sound asleep under the bed.

It doesn't matter who's up, he won't get up until 10 or 11 o'clock in the morning. He doesn't like early starts!

If you were to swap roles with Reggie for a day, how do you think he'd cope being you and what would you most love about being him?

Well he'd hate the early starts, definitely. He loves being around people, he's great company and happy if someone is around so I'd like that part of Reggie's day.

Fernando Torres (Nick is an avid Chelsea FC fan) – Well, if he wasn't a lame dog – he's doing terrible isn't he – then he'd be something like a Dobermann.

Sarah Jayne Dunn (played Nick's onscreen wife on Hollyoaks)  –  She'd be a Poodle I'm sure of it.

Simon Cowell – He would definitely be a dog who loves to show off – he'd be one of those big dogs you see at Crufts.

Big dogs or little dogs – I couldn't choose really. Reggie's a little dog, and I love him but I'd love a big dog for walks.

Pedigree dogs or cross-breeds –  I honestly don't have a preference. I don't think it's that important, I think it's more important to have a connection with their personality.

Days off or days at work  – Days off! But I say that knowing I'm really fortunate to love my job.

Describe the last time you laughed out loud because of something you saw Reggie or another dog do.

It has to be this morning at your photo shoot – he loved it! It was like doggy Christmas! 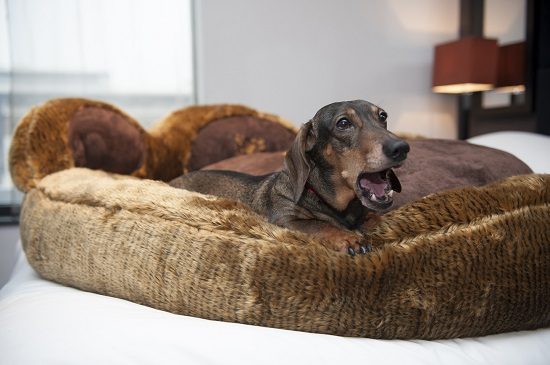 In researching for today I found out you'd been in a couple of music videos when you were younger for  Mike + The Mechanics ("Over My Shoulder") and Roxette ("Almost Unreal"). Tell us something about you that not many people know (music video stardom aside).

Well, I was in a film with Christian Bale called 'Mio in the Land of Faraway' years ago. It was my film debut as well as Christian's and we spent four months filming it in Russia.

Could you see yourself doing more films in the future?

I would love to but I always think, you know, the grass isn't always greener. I'd never write it off, but I know where I am in the spectrum of things and I'm lucky to really enjoy my job.

What is your current, or all time favourite…?

Book – I love anything by John Grisham, he's my favourite author.

Film – My all time favourite has to be the Shawshank Redemption.

I think it has to be the companionship really, just having them there around you. There's no angst in their personality at all. They love unconditionally don't they and it doesn't matter if you come home happy or sad, whatever your mood they love and wag their tail regardless.

(Laughs) Plus, they don't talk back!

And finally, this is always a tough question and often requires a fair degree of thinking time but….If Reggie had the ability to speak and answer one question and one question only, what would you ask him and what do you think that he would say?

Let me have a think about this.

I think I'd ask him “What could I do to make you even happier in your life?” and I think Reggie would say “Maybe share some of those Master Chef meals with me, instead of normal dog food.”

PetsLoveScruffs.com – For Their Luxury Dog Beds, the Expedition Pet Bed and the Grizzly Bear Bed