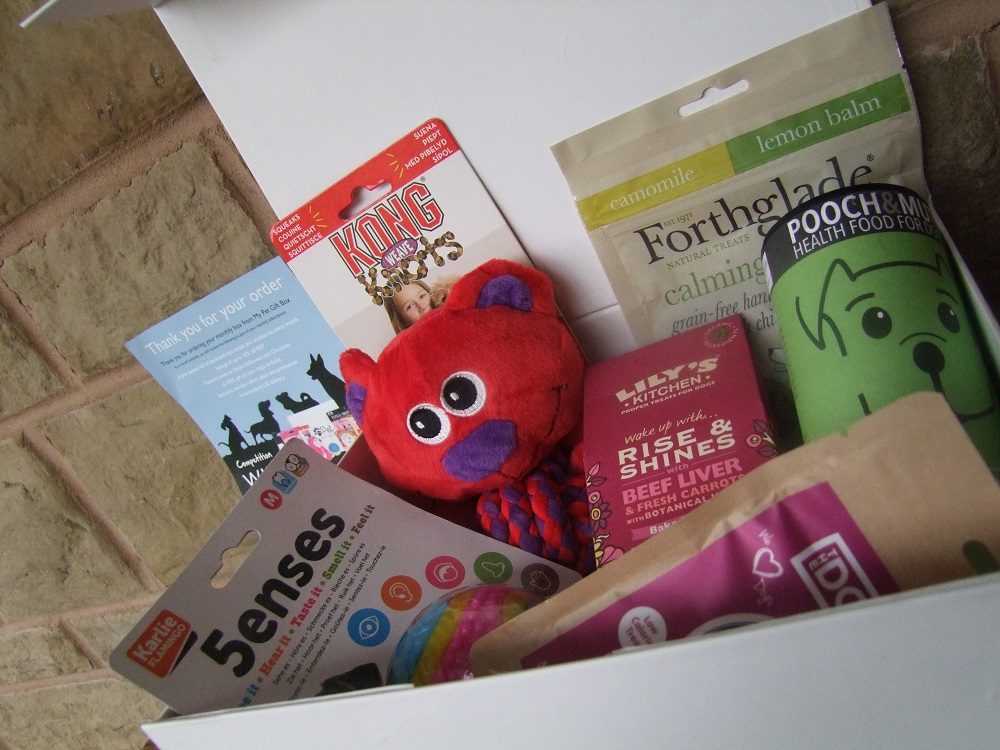 This month we get to combine two of our three review dogs favourite things - food and play.

Mia is the foodie. She's lost all forms of subtleties when it comes to letting you know she'd like a taste of what you're eating. In fact, since she got her pet treat cam to review a year ago, it's like she thinks the world is her Petzi.

Whereas for Christopher and Danny play is king and as such, toys have a fairly hard time in our house. They have to be the SAS of the dog toy world to survive the constant battle of tug of war.

When we were introduced to the new gift box subscription for pets from mypetgiftbox.com (priced from £24.99) and invited to review one we jumped at the chance.

We explained our dogs' interests in all things food and play and shortly afterwards received a box packed full of six products, four packets of treats and two toys - some of which I had seen but never tried and others were completely brand new to me, which after 17 years in pet publishing is quite an achievement.

Every inch of the box was filled with products rather than padding.

Typically, boxes will include a selection of six products - treats, toys and even accessories - and because you can tailor to your dog, they are handpicked to suit.

The quality and feel of the box is definitely up there with some of the best in the beauty sector - it's also one of the best for choice that I've seen in the pet field and I've reviewed 3-4 previously. My dogs, being both greedy and toy obsessed, soon worked out that they could open the box with their nose by flipping the lid at the size so it had to be kept out of reach.

It's reasonably priced too.

With options to receive monthly, quarterly or once every six months, the price varies depending on frequency. For example, the monthly box is £24.99 per month, the quarterly box is £29.99 and the six-monthly box is £34.99. Delivery is always free so the price you pay goes entirely towards the contents of your pet's box too.

For the ability to personalise to your dog as well as themed boxes around holidays and seasons, such as Easter and Christmas, I would.

It's most definitely an owner thing, but I like the thought of something arriving that will be tailored to them and a complete surprise for both me and them as to what's inside.

I would most likely go for the quarterly option though because almost a month later I still have at least half of the dog treats, and from personal experience of buying beauty boxes on subscription, products can mount up before you get a chance to use. I would much rather make sure I know everything has time to be enjoyed before the next box arrives.

Although you pay less per box to receive monthly and the cost increases per box if you opt for a quarterly or six-monthly box, it's still decent value I think - and ultimately with anything like this, I think you're buying in part to see your dog (or cat's) reaction as much as for the goodies inside.

If you're keen to try before Christmas, K9 Magazine has been given a 50% discount code to share that means your first box will be half price. Use code: BOX50 at checkout on www.mypetgiftbox.com to receive.

Many thanks to Eddie and the team at mypetgiftbox.com for allowing us to sample their latest subscription box!

In This Issue... Talking Point: 13 Dogs Who Own Halloween Health: Are We Passing Our Social Anxieties Onto Our Pets? Lifestyle: NASCAR Power Couple...

Ashley Busch is a model and businesswoman who turned her passion for horses into a career which has seen her play professional polo around...

If You’re Looking to Get out & About With Your Dog, You Might Need This

A few months ago our car was written off. It was parked in a car park overnight and the next day we discovered it...

All You Need This Christmas: Gift Ideas for Dogs & Their Owners

As Christmas nears, thoughts turn to gift ideas for our beloved dogs and fellow dog lovers. If you're anything like us, making lists and...