Winning the lottery is most people’s dream along with the list of life changing purchases that a lottery win could mean – houses, cars, holidays and all manner of luxury items. But for one lottery winner – Michelle Edwards - all the new found trappings of wealth didn’t totally fulfil her, she wanted to do something more meaningful with her life. She found that fulfilment by becoming a puppy parent for Canine Partners.

Michelle and her husband Ed, 48, won £1,925,567 online in August 2008 just six months after they married. Michelle comments: “We were already happy with our lives but winning the lottery was the most amazing experience and gave us the chance to change our lives beyond our wildest dreams. I immediately quit my job after winning and we bought a four bedroom house set in three quarters of an acre. But, after working all my life, when I had finished doing the house up I thought ‘what on earth am I going to do now?’ The truth is I wanted to do something more worthwhile with my spare time”. 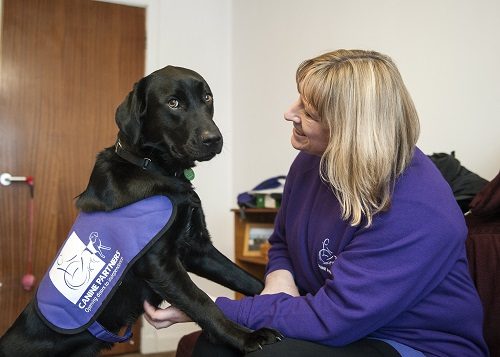 By chance Michelle saw a stall at Sherborne Country Show for the charity Canine Partners which provides assistance dogs for people with disabilities. Already a dog lover with three dogs of her own, she immediately knew she wanted to help. Michelle trained to become a puppy parent in 2009 and was handed Golden Retriever puppy Xagan that September, two years after becoming a millionaire.

Michelle said: “I lost my heart to Xagan as I love puppies, but I always hoped he was going to change somebody’s life. I have one puppy at a time, socialise them by taking them everywhere with me: shopping, on the bus and train… anything and everything you can think of so they see as much of life as possible from a young age. After 18 months Xagan was paired with a female member of the armed forces who had suffered devastating brain injuries. I was sad to lose him but happy in the knowledge that he would change her life.”

Holly, Michelle’s second puppy, pictured above, bounced into her life in December 2011 and, after completing her training, which includes shopping, doing the laundry and even picking up the phone, Holly now assists Gill Bedwell whose rare and devastating neurological disorder left her in a wheelchair.

Gill comments: “I’m so grateful for what Michelle did. I no longer have to rely on carers to get me in and out of bed. If my leg is immobile Holly will gently tug on my pyjamas until my leg comes off the side of the bed and I can put my foot on the ground. Michelle has given me the gift that no amount of money could ever buy – she has given me my life back. I’m so glad she won the lottery because of how it’s changed my life. 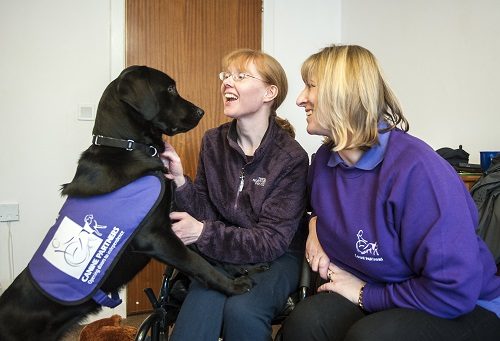 Michelle, pictured above, with Gill Bedwell and Holly

Michelle adds: “The puppies I have helped train have transformed me and the way I think about life. They are proof that some of the best things in life really are free. When I first won the lottery it was like my wildest dreams had come true. We bought a luxury house, new cars each, two boats, designer gear and holidayed around the world. But the truth is, after a few years, I wanted to give something back to society. Winning the lottery was amazing but the path it’s taken me on really has fulfilled me.

Not only is Michelle now training puppy number three, Dylan, but she recently helped persuade 17 of her fellow lottery winners to spend the day helping out at Canine Partners National Training Centre in West Sussex. The team, with a combined worth of more than £52 million, donned their painting overalls and picked up their paint brushes to give the centre’s reception training hall and outdoor fencing a new lease of life. The charity has also received £370,000 in funding from the National Lottery which they used to build specialist chalets for applicants to stay in whey they come to meet and train with their special dog.