The little face in the photo stared out from the grill in the kennel, thick black fur and eyes that were alert yet sad, and I knew I wanted to save Alexia (known to her friends as Lexie) from the horrors of being a stray in Bosnia. Already having two other rescue dogs, Monty our tough, rough Dachshund, and Jilly a beautiful Patterdale cross Staffie, I was happy, but fate moves in mysterious ways, said Brian Lux, and little did I know that Lexie would bring me not only joy, but a new calling as she enlightened me to the situation facing animals every day in Bosnia.

Thousands of strays roam the streets, partly as a result of civil war, which saw many casualties of war, both human and animal. The situation in Bosnia is desperate for stray dogs and cats as there is no equivalent of the RSPCA, and the public attitude, is in the main, lacking. 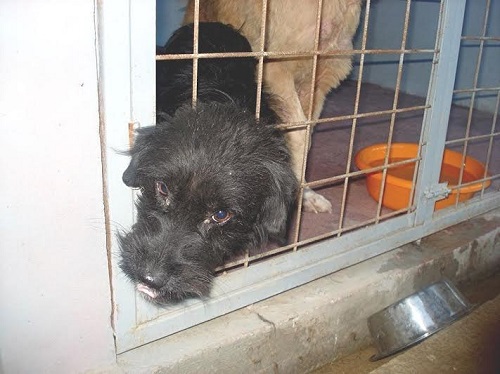 In 2009 the Animal Protection & Welfare Law came into force giving hope to animal lovers that the country wide situation would surely improve. The Bosnian Act on Protection and Welfare of Animals is one of the best in Europe but no one is interested in that, political interests, or interests of those involved in crime, mean the act isn't being implemented as those who once dared to hope felt it would.

A young lawyer in Sarajevo, Dalida Kozlic, has devoted herself to rescuing animals and fighting the Government in Court which has left her open and exposed to being targeted by those who oppose her views. But her bravery and dedication keeps her focused.

The protection of animals living in Bosnia and Herzegovina is often identified with the financial situation in the country. It is a complete absurdity. Cases of animal abuse are not considered as awful, illegal acts. Animal rescuers are presented as "fools" and those who "do not have anything better to do."

Society does not understand those who are unable to fight for themselves need someone to do this for them and that it's their right to have someone in their corner. It has a complete lack of empathy for animals who suffer.

In my world as a lawyer, the apprehension and prosecution of offenders is the obligation of the police and judicial authorities. They are obliged to perform their duties and the state is obliged to provide the necessary education to all his servants, including the importance of addressing animal abuse. 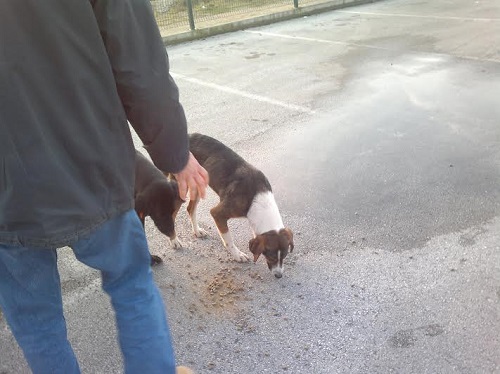 There are many illegal so-called shelters, where it's estimated more than 100 dogs are killed monthly in horrific circumstances, and although huge amounts have been sent by the EU, and the UK, the money disappears via the owners and managers, who are close to the local authorities who charge invoices for false spay/neuter programs, as well as the food that would never be given to animals, veterinary examinations and treatment, and at the end means for euthanasia. In reality, the stray animals suffer terrible in these camps.

These dogs become targets for gunmen and sadists. A notorious and illegal group of dog catchers (you can watch a video here) was established in municipality Novi Grad Sarajevo on 30th May of 2013. This so called "Hygienic service" was not established and registered in accordance with the article 29 of Animal Protection and Welfare Act as well as Ordinance on establishing and conditions that hygienic services must fulfill. Since then, thousands of stray dogs have been killed in Sarajevo.

The worst thing is that they have support of Inspectorate of veterinary Inspection of Canton Sarajevo and Administration of Police of Canton Sarajevo. The paradox is that veterinary inspection and police, which are obliged to stop and punish illegal dog catchers, support them and protect their illegal activities. 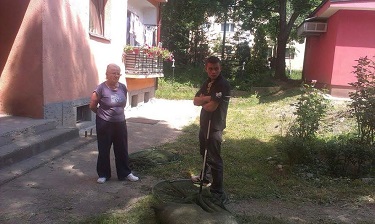 I have presented hundreds of evidences to Bosnian police officers and prosecutors about illegal activities, but they do nothing to stop atrocities. It is one of the worst violations of Criminal Code in Bosnian history.

Luckily there are privately run kennels, called ‘Pensions’, yet I'd estimate that no more than twenty dogs are found new homes each year across the country, although thanks to the support of other rescues more are finding homes outside of Bosnia. The 'Pensions' find costs hard to obtain, so fund raising and getting adoptions/foster homes is ongoing.

The actual Animal Protection and Welfare Act of 2009 is absolutely enforceable and functional law and because of that the animals of our country and those who do try to help and save them face an uphill battle.

The private 'Pensions' kennels not only have the ongoing running costs to consider, but the costs of veterinary treatment to get the animals back in good health (you can imagine I'm sure some of the injuries these dogs face before arriving at a safe haven), as well as costs for protecting the dogs against diseases, such as rabies, and microchips and Pet Passport for travel with the ultimate hope these dogs will be saved and given a new chance of hope for a life outside of Bosnia, such as Alexia, found with Brian.

My involvement began on 17th October 2013 when I saw an appeal on Facebook. The little face of a terrier, called Scruff stared at me. Surely we had room at the 'Lux Inn' for one more? I contacted the rescue site to find out the costs involved and what the adoption process was in greater detail. There were vet fees, an anti-rabies injection, a microchip, paper work and of course the home check to make sure we were a good fit. Then there was the cost of transport from Bosnia to the pick up point in Hungary where Europet would bring the precious canine cargo to the UK.

A few days later I was told that Scruff was going to the USA, and asked if I would be interested in Alexia? The rescue mission to bring her to Wales began, especially when ‘A,’ who runs the pension, posted: ‘Alexia is a great dog she is spayed and she love everybody, dogs, people, kids, she is cute dog.’

The next step was to book a place with Europet who make the long journey once a month. Alexia was booked on the trip commencing 6th December, and due to reach the final drop off point two days later at an Equestrian Centre near Chelmsford. This would mean a round car trip of over 550 miles.

I had been contacted earlier to see if I could help another rescuer and take her dog to meet somewhere on the M6. To be safe, I brought a travel cage as having a dog fight en route did not appeal to me. The vans arrived and Alexia, easily recognised, placed in the cage, and my extra passenger fastened to a passenger safety strap. The journey home commenced.

The handover of my extra dog passed without incident, and finally I backed down into my driveway. The moment of truth had arrived, with the ultimate test.

Alexia was left in her cage, and Monty and Jilly released into the back garden, then my Bosnian refugee taken to meet them. I watched as she stood on the back step for a moment, then trotted onto the lawn, and my fears disappeared. She was greeted by tail wagging dogs, and the first hurdle cleared. 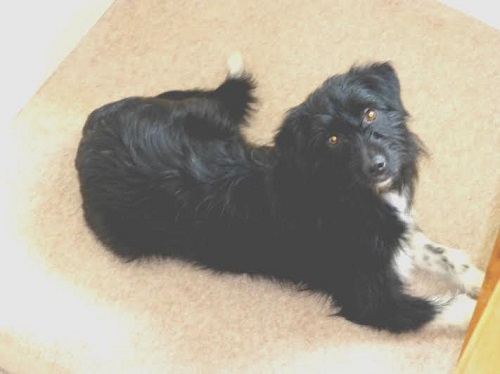 The next morning Alexia raced out into the large rear garden, joining Jilly at the far wall to join her in challenging passers by. I realised that despite her traumatic life in Bosnia, Alexia’s character had not been crushed and there was no sign of being cowed. On the contrary, she began showing her spirit and desire to play rough and tumble games with both Monty and Jilly. She was quiet with little barking, yet her eyes were bright, and a large, bushy, curly tail wagged furiously during play.

Alexia, now called ‘Lexie,’ needs constant reassurance she is safe, loved and wanted. I can be sitting watching television when she will place her front legs on my knees, and look up with soft dark eyes, then place her head in my lap. I stroke her, saying how glad I am I brought her to Wales, and she will never leave us. I am rewarded with a wag of her tail, and a soft tongue washing my hand. 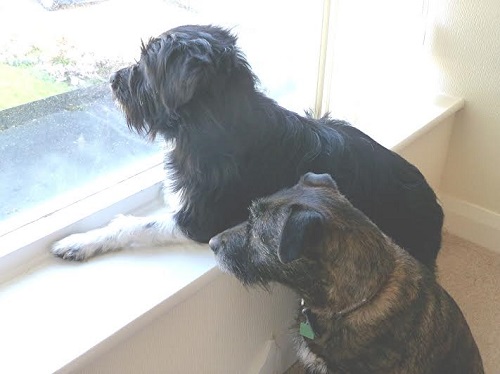 As the months have passed, Alexia joins Jilly on the landing to watch the world go by, and barks her challenge, especially if a pedestrian is accompanied by a dog. She is learning English so now responds to words like ‘Sit,’ ‘Stay,’ and ‘Down.’

Although she looks well built, she was painfully thin when she came, her ribs and spine sticking out, suggesting to us that food is not plentiful in the Bosnian rescue centres, but she has gradually filled out. She now walks on a separate lead, and apart from the garden, like the other two, is never loose except when on the beach where I have visual contact all the time.

The floods last May, in Bosnia, resulted in hundreds of dogs and cats being drowned, and some pictures heart rending, with rescue centres flooded and dogs having to be taken to safety. This horrendous event means more dogs need saving, and more homes sought for either foster care or a ‘forever’ home. Funds are desperately needed for veterinary fees, medication, “Pensions” costs and help towards the costs of transport to foster and forever homes. A fire, like that at the Manchester Dogs Home, in one public pound, killed 50 dogs and injured another thirty. We still don’t know if it was deliberate.

The situation is worse now a kill policy has been implemented, despite a motion for animal welfare in 2009, as Dalida mentioned, to address the huge stray problem. Dog catchers roam the streets, and often kill there, in view of children. Animals have been left hanging from posts. Those in public pounds are starved to death, with no water, despite funds from even the EU for neutering and food. The money is pocketed by corrupt politicians.

I admire Sandra Jensen who has brought to the attention of so many countries the horrors of Bosnia. Her story is inspirational, as she was moved by the story of an Alsatian, named Vucko, who was found with his lower jaw blown away with a firework. Despite every effort, he died, resulting in ‘Advocates for the Welfare of Animals in Bosnia’ being formed in 2012.

I have learned Alexia was only one day from death when found. She had been spotted with four others in a dog pound by ‘A’, who asked why there were so few there. On being told the others had been euthanised, ‘A’ offered to take the five but was refused. The man running the pound said he needed them to show the Inspector the next day to ensure his money, before destroying them. That night ‘A’ and others entered the pound and kidnapped the five dogs, and the others have also been found new homes. 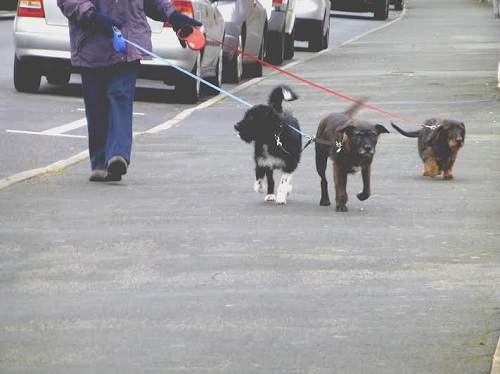 Adopting one of these dogs will give you an animal giving undemanding love and loyalty, and we supporters will help with costs. Our aim is to save as many as possible from the animal hells of Bosnia and Romania.

How You Can Help

Find out more about the work of Animal Welfare Advocates for Bosnia online at www.inmemoryofvucko.org or you can donate to help support via PayPal sending to donations@awabosnia.org