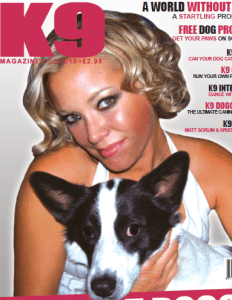 Kristanna Loken was born in New York, and has spent much of her private life in the company of animals. She has spent much of her working life in the company of Hollywood’s most famous faces, having appeared in Terminator III, In The Name Of The King, with her latest film, the dark thriller BloodRayne out now. She spoke (at length) to K9 Magazine about her tumultuous life with dogs - this is the re-wind of our interview with the T3 star.

Hello Kristanna, thank you for taking our 20 questions.

Tell us about your pets. Names, breeds and ages, I know you’re a huge animal lover.

Well I have a dog called Bobby, she’s around a year old. I found her when I was in Romania filming BloodRayne, I found her in the oldest medieval town in Europe. She was tiny, she could fit in the palm of your hand, she must have only been a couple of months old, and she was covered in fleas and maggots, she really wasn’t looking like she was going to make it. She travels everywhere with me from South Africa, to Vancouver – everywhere, she’s a very well travelled dog! Its funny you know, a lot of the other people in the production office all came back with an extra animal, Michael Madsen, Michelle Rodriguez, even our director was a huge animal lover, he came back with a dog too!

What films and projects are you currently working on?

Well I did a film, I mentioned it above, BloodRayne this is out at the beginning of January, it’s a vampire movie, we had a great cast, Michael Madsen, Billy Zane, Michelle Rodriguez, a great cast. I’ve also just produced my first film and I also starred in it, its called Lime Salted Love, that’s just being edited and then that will probably go on the independent film circuit. And I have another film, In the Name of the King: A Dungeon Siege Tale, with Burt Reynolds and Ray Liotta. So it’s been busy!

International and domestic attitudes towards dog ownership vary greatly from place to place. Growing up on your parents’ farm in North New York, how is dog ownership different there compared to other places you have been?

Oh, that’s very tough, before I had Bobby, I had another dog, a Labrador cross Rottweiler called Buster, Bobby probably weighs 20 kilos and she’s medium sized, Buster was probably 35 kilos, travelling was a little tougher with Buster because he was a larger dog, sometimes it was like smaller dogs are okay – bigger dogs aren’t always welcome, but you know that’s a sacrifice, especially if you’re staying in a particular place for a certain amount of time filming.

My animals coming with me is so important, it’s like a piece of home and I find it’s grounding, I always like to explore and recently in Vancouver, I was working with the same director from the film in Romania and he is a major dog lover, his two dogs, one from Romania, the other from Germany, both ran free on set and so Bobby joined them and we’d get the flashing collars for night-time. I have to say, I have been no where more pet friendly than Vancouver, they had room service for dogs where you could order treats, there were so many walks and trails. All the costs for travelling from Romania back through South Africa and then home, it’s all worth while for the time we spend, walking or trekking, whatever we do, what they give back – it outweighs it all.

Arnold Schwarzenegger – Well, the first thing which comes to mind is a Bulldog, because they’re tough, strong and playful. Yeah, a Bulldog.
Ozzy Osbourne – I once rode on a flight to London with his wife. Something like a Dobermann Pinscher x Pug.
George Bush – Oh jeez, lets see - a Dingo.
Pamela Anderson – Either a white Poodle or, yeah, a while Poodle, totally sculpted with pink bows!
Al Pacino – Oh I don’t know, more like a Lab, because he’d be quiet, but have such a deep roar. Buster, had such a deep bark.
Carmen Electra – Wasn’t Carmen on the cover of your magazine I saw? I’d say, maybe like a brown Chihuahua with big blue eyes.

Big dogs or little dogs – It makes no difference really, maybe medium to large, because they have more stamina and you can play a little rougher and they’re nicer to curl up to.

Days off or days at work – Well you know I love to be invested in a project, just submerged in it, so it would probably be working, but I like a nice balance.

Lead and collar or dog running free – Oh definitely running free, running with the horses, I think if you have a good relationship and they come when called, I had to have Bobby trained, I’ve never had to send a dog for training before but she had no recall stability and she didn’t like to come when called but its been great and I’m just keeping up the training, I wouldn’t want to be an unruly mother.

Here’s where we go for our scoop, tell us something no one, or very few people know about you.

Oh well, okay, let me think, there’s probably quite a lot, okay hmm, well, I really, really like my alone time, that’s a number one priority. Keep things as simple as possible. I’m not really a phone person, unless I have to be. No distractions.

What has been your favourite project you have worked on to date and who have you enjoyed working with most?

I really loved working with Sir Ben Kingsley, I think it’s a great testament to who you are, he’s not only a wonderful, wonderful man, but such an amazing actor, a great man. I would definitely love to work with him again.

My favourite project would probably have to be Terminator 3, it was probably the most pivotal, to be able to work with such a huge, world-wide scope - it opened so many doors. It was a wonderful experience!

Had to shout at your pet – Her training hasn’t meant I’ve had to shout a lot, but she seems to be teething, she loves her rawhides, but she ran out and started chewing one of my rugs, so that would probably be it, but she knows when she’s done something wrong.

Had to go to the vet – Well, here’s a story. I was dating a vet in South Africa, and last Christmas, I said all I wanted was for him to spay my dog and for me to watch, I thought it would be fascinating. That was definitely a turn on!

Embarrassed yourself - Every day! Well, one time, what’s the word – oh I can’t think of the word, but I once left the house in my bedroom slippers, that was one to get around at the dinner table!

Were nervous – Well for the most part, I’m fairly confident, but I do sometimes get apprehensive, the last time was in Vancouver, I was there for my first time screening of BloodRayne and I thought, okay it would just be me, the director and possibly another actor, I got there and there was room full of investors – I was definitely sweating – but it all turned out good!

Laughed out loud because of your pet – This morning, I live with my friend and her 13 month old daughter, who’s my god-daughter. She loves Bobby, you know he must be like a life size teddy bear to her and I was in the next room and I could hear her giggling so hard and I went in and Bobby was just running around the room constantly doing laps! So funny to watch!

Trained your pet to do something new – Well, let me think, I’m just really keeping up the training work from before but from the beginning, she learnt to shake her paw and that seems to have stuck, even if she does shake with the wrong paw.

Each year we run a competition to find the UK’s Coolest Canine, a previous winner was a Cocker Spaniel named Tangle who has been trained to detect bladder cancer in humans, if you were to nominate your dog, how would you sell her to us, what would you tell us that makes her unique?

Really, he can do that? Wow!

Okay well, I would say she’s a total people dog, on set people loved her, she has such smile, the twinkle in her eye – and I always knew I could find her near the food!

This is always a tough question and often requires a fair degree of thinking time but….
If your dog(s) had the ability to speak and answer one question and one question only, what would you ask them and what do you think that they would say?

Oh boy, this is a tough one, she has such an expressive face, I can normally tell what she is thinking, her face tells me if she likes the food, if she’s comfortable. Maybe if she likes her name?

Okay, how about, “Is she comfortable in her kennel while we’re travelling, because I know that’s a vulnerable time?” and I think she’d say “I’m getting used to it, and I’m alright!”