K9 Magazine recently caught up with noted photographer Joseph Sinclair, his partner Ryan and their dog Stewie. We love that Joseph has made Stewie part of his celebrity-snapping life and were eager to hear all about the upcoming BBC series featuring the pair of them.

Our dog is the wonderful Stewie Sinclair, he's a 9 month old Yorkiepoo. Our friend's Aunty bred her Yorkshire Terrier with a Toy Poodle and when we saw the litter, we were obsessed with Stewie right away.

We were completely drawn to him and we had a bond very quickly. We went to see him at the breeder’s every week (twice a week toward the end) until we were able to take him home. He's a feisty, sociable little dude who loves hanging out with dogs and humans alike.

We always said we would get a Westie as my Mum had two and they were amazing dogs but I was interested in a Toy Poodle, so a Yorkiepoo is perfect. Stewie has been in photographic studios since he was 12 weeks old, so they're a second home to him. He has a different routine every day so he never gets bored.

I'm fortunate that I can take him to work with me and clients always love having him on set. Plus he's so used to the TV cameras now since we've been shooting the documentary all year. 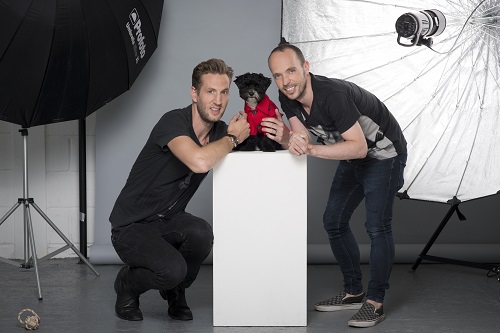 He's very headstrong and stubborn, I read that between six and 12 months is the rebellious stage, he definitely tries to push boundaries, he's barking at me as I'm typing this because I'm not playing with him. I like that he has a rebellious streak and a confident personality.

When you decided to get a dog, what was it that led you to Stewie and made him stand out as the one for you and your partner, Ryan?

We've been speaking about getting a dog for years and kept making the usual excuses, the main one being that we were too busy. Then we were introduced to Stewie's litter through my friend's Aunt, went along after Christmas just to have a look and that was it. We fell completely in love with the puppies, especially Stewie.

He was the smallest and I loved his little white markings in his black fur and his little eyes were adorable. We were going to get two puppies but felt it would be too much for us at the moment. My Mum has one of Stewie's brothers from the litter.

Did you both grow up around animals?

Yes, we had a Labrador-German shepherd cross in my house when I was about 6 and we had a cat. Ryan had a Yorkie when he was a kid.

Stewie is one of a select few dogs featuring on a new BBC show due to air in the not too distant future. Tell us a little about the premise of the show and how you got involved.

We can't say too much about the show at the moment but it's basically a documentary about the first year in a puppy's life. It airs on BBC2 in the not too distant future. I was approached by a casting director I've worked with on TV shows previously who knew we were getting a puppy and asked if we wanted to be a part of the show. I love working on TV shows and this is such an exciting project to be part of.

Have you learned more about Stewie from his time on the show as filming has gone on? For example, do you think it's brought out parts of his personality which you hadn't had the opportunity to see before?

We realised that our training methods are not always the best, we're the first to admit we're not the slightest bit strict with Stewie. He loves attention and has become accustomed to the cameras and has possibly become a bit of a show-off, which I love of course!

Joseph, we know you're used to being behind the camera as one of the UK's best known celebrity photographers – Daniel Radcliffe, Elton John and The Saturday's are known clients – how have you felt being the proud owner behind the scenes as Stewie's good looks and charm have won him the modelling contract for the pet fashion brand, Urban Pup?

I'm super proud of our Stewie, it's the first time I've ever done any animal photography and he is so easy to shoot. We had a couple of potentially difficult set ups for example shooting outside a tube entrance in Piccadilly, but Stewie just sits there and lets you take the photograph. He's completely fine wearing the clothes. We just make sure he's given lots of treats and made a fuss of all day so he doesn't get bored and finds the whole experience enjoyable. 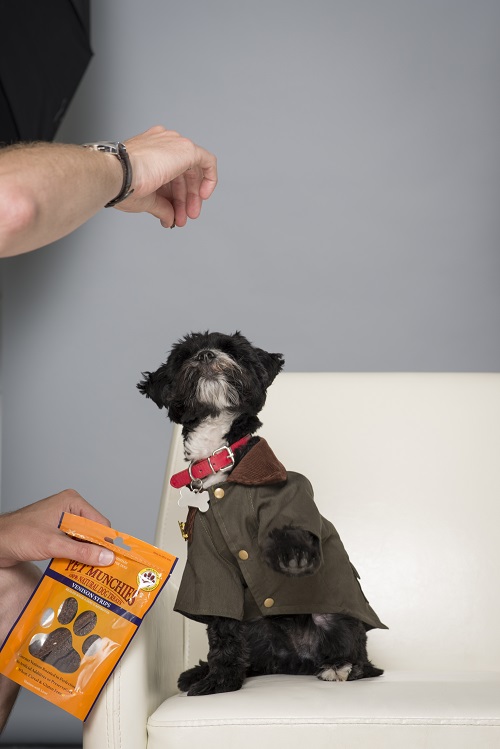 Moving into some of our questions to get you thinking, if you and Ryan had to swap roles with Stewie for a day, what would both of you love most about being him? And in reverse, how do you think he would cope being you for a day?

Joseph: I'm really tall so I'd love to see the world from the perspective of a tiny dog and also to see the world in a different colour, as dogs see colours differently to us. I always wanted to live in black and white for a day so this would be the closest thing. If he was me…he's very charismatic so he would have no problem making people feel comfortable in front of the camera.

Ryan: I'd love to chill out all day, eat treats and get loads of fuss. If he was me…he would love the fact that he has a cool job, great people to work with in a fast paced environment. I don't think he'd be a big fan of rush hour tubes though.

I'm a bit of a rookie when it comes to dog breeds so these may be massively incorrect! Apologies to these celebrities in advance…. 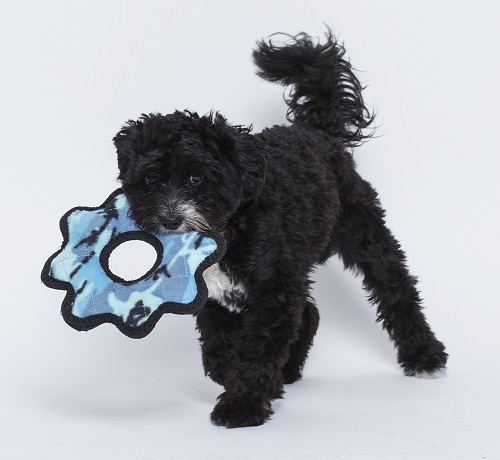 Describe the last time you laughed out loud because of something you saw Stewie or another dog do.

A really funny moment for me was when we were doing the K9 Magazine cover shoot and Stewie was wearing his little pink Urban Pup body warmer.

For some reason at that point he decided he wanted to hump his toy dog that I have at the studio. As we looked over all you could see was Stewie on top of the stuffed dog and this little neon pink body twerking and little grey hood popping up and down frantically. You’ll probably get to see this when the show airs.

There are over 100,000 dogs in rescue centres across the UK waiting for a loving new home. If you could encourage people to consider bringing a dog into their home, what would you say the best thing is about owning a dog?

There are countless reasons to bring a dog into your home. It's actually really hard to put into words how incredible having a dog is. It's completely changes your life in such a positive way. They make you feel so calm and at ease even if you're having a stressful day. I find I have to moderate my mood if Stewie is around as they are so sensitive to our feelings and can read us so well. This enables you to remain calmer and not get so worked up over things.

Also, dogs keep you active and we love taking Stewie out for long walks. The best thing is chilling out on the sofa at the end of the day and snuggling up with Stewie, I love cuddly Stewie the best! The unconditional love you'll receive from your dog is priceless!

Finish the following sentence, our dog is... everything we wanted him to be! 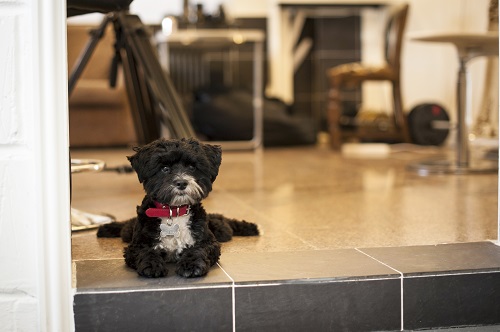 And finally, this is always a tough question and often requires a fair degree of thinking time but….If Stewie had the ability to speak and answer one question and one question only, what would you ask him and what do you think that he would say?

If Stewie could speak...

Ryan: I would ask 'Do you like our music taste?' (we play a lot of Kylie in our house) and he thinks Stewie would say, “yes of course but tell Joseph to play a little less Doris Day.”

Joseph: I would ask “Are you happy?” I'm sure he would say he was a happy little pup. I would hope that’s what he'd say!

Many Thanks Joseph, Ryan & Stewie!