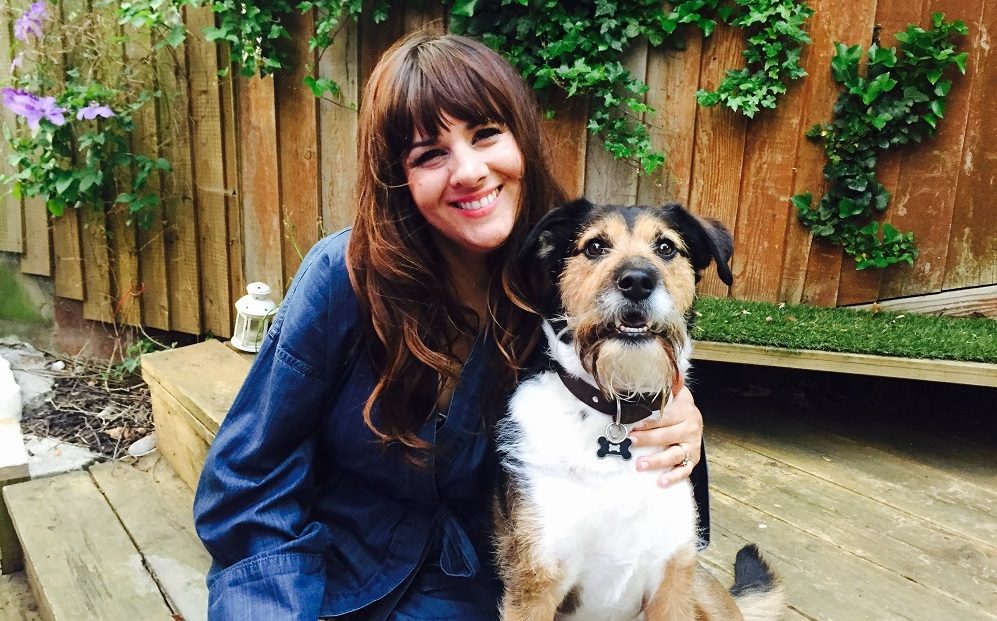 Rumer is a British-born singer-songwriter who is preparing for her fourth album release, 'This Girl's In Love: A Bacharach And David Songbook' featuring some of Burt Bacharach and Hal David’s most memorable co-compositions.

It's clear to hear her passion for the music through the album's debut song 'What the World Needs Now', and even clearer why Q Magazine called her 'the heir to Dusty Springfield and Karen Carpenter’ with each note that's struck in a very soulful and familiar way, particularly of the latter icon.

After launching her solo career six years ago, the platinum-selling artist has said it's her dog Alfie that keeps her grounded and the launch of her latest album combines her love of music and passion for animal welfare, as she explained to K9 Magazine's Kim O'Meara.

Hi Rumer! Thanks so much for your time today. We know you're a massive dog lover, please tell us about your own dog.

Hi! I have an amazing dog called Alfie, we aren’t sure what breed he is, but we think he is a Collie/Terrier mix. Myself and my husband adopted him from a local shelter near to where we were living in Arkansas at the time.

As we were pulling into the driveway of the shelter I knew and my husband knew that was it! Now I shudder at the thought of not pulling into that car park that day because Alfie is the best thing that happened to us!

How amazing that you know that one decision changed your future for the better. How did your love of dogs come about? Did you grow up around dogs?

When I was about 5 years old my family got a wonderful Springer Spaniel called Sally, so I grew up with a dog and have always loved them.

I always wanted to have a dog, but I spent many years as an aspiring musician and my transient lifestyle wouldn’t permit it. Then when I started singing professionally I was always on the road.

I can imagine it would be hard to balance being a dog owner with travelling so often.

When all that started to slow down, and I met my husband and we moved to Arkansas, that’s when we decided to 'just visit' the local shelter one day!

Balancing life on the road with being a dog owner is tricky and requires much more planning. When I toured my last album, Alfie came on the UK tour with us. My make-up artist takes care of him when I am on stage and he stays in the hotels with us.

I usually have to study the map before we get to a place and find the dog parks or local walks, so when we get up each day we know where to take him.

When we toured Europe he stayed at home with my friend Fiona, who moved into the house to keep him in his routine but we've toured America with Alfie. We fly with him as a service dog in the USA so he travels in the cabin with us, but I don’t like to put him on a plane unless we absolutely have to. He rolls with it, he is happy as long as he is with us.

Your latest single 'What The World Needs Now' is a beautiful song and part of your album covering songs by Burt Bacharach and Hal David. Mr Bacharach has shared some very kind words about the album, hasn't he!

Yes!  He told us that he thought the album was 'special' and that I had breathed new life into the songs. That was amazing and meant a great deal.

Tell us a bit about the inspiration behind the songs you chose to work with.

I worked on this project with my husband [Rob Shirakbari], who I met at Dionne Warwick event at the Albert Hall (he has been her Music Director for 30 years), so it’s been a labour of love for both of us. We went through the catalogue together over several months at home, trying out different songs in a variety of styles, tempos and keys, until we settled on the track listing.

You have to think about all sorts of things when you’re putting a songbook record together, because everyone has different Bacharach and David favourites, so we tried to put together a section of songs that would reflect the diversity of styles in the catalogue, dug out some lesser-known gems, as well as recording some of the  classic hits!

You are planning a concert to launch the album in Leeds shining a spotlight on the Yorkshire laboratory which breeds Beagles specifically for testing with all profits donated to For Life On Earth (FLOE) aren't you?

I am. When I heard about the B and K Beagle breeding facility which will breed over 2,000 beagle puppies a year to be sent to laboratories to be inhumanely tested on, I was horrified that something like this could happen in this country in 2016.

The UK is a nation of dog lovers with one of the best animal welfare records in the world so I couldn’t understand how this could get approved, especially when the local council originally denied planning permission, and why there wasn’t enough noise in the media. I knew I had to do something to shed some light on this issue and try and alert people to what is happening.

I’m donating profits from my concert to For Life On Earth (FLOE) which is the leading science campaign, with evidence illustrated by the foremost medical experts in the world. These scientists have proven that such experiments on Beagles, and other animals, will never be able to predict the responses of human patients - and are now shown to actually delay and prevent the arrival of effective treatments and cures. This position is reflected by a huge number of peer reviewed science reports, including The British Medical Journal and National Institutes of Health.

It is utterly wrong that those with vested  interests are given a free rein to sell such experiments to society, under the false premise that this cruelty helps human patients. I am proud to be supporting FLOE who are backed by, to date, 130 MPs who have signed  four Parliamentary Early Day Motions calling for a thorough public scientific debate hearing - so that current medical knowledge be heard and heeded by decision makers, to overturn a 70 year old law which sill requires animal tests, despite their now proven failure.

How can readers find out more about the concert?

There are still tickets available for the concert, and all the profits from ticket sales and merchandise will go to this great campaign with MPs at FLOE.  http://www.seetickets.com/tour/rumer

What can readers do to get involved also (aside from going to the concert)?

They can join the campaign for a thorough science hearing and ask their MP to sign the current Early Day Motion (EDM) 400.

The more MPs that back this science debate hearing, the greater the pressure on B and K to agree to submit the name of a scientist to represent their side. The hearing’s debate conditions are endorsed as 'well set out and fair' by Michael Mansfield QC – independent experts will be present to judge which of the opposing scientific positions is correct.

To support the MPs’ science hearing simply type in your postcode at this link, and ask your MP to sign EDM 400- http://edm400.forlifeonearth.org

I really hope the hearing criteria is met and this can come to light to save current and future generations of Beagles being bred for testing.

It's clear to see dogs are a huge passion for you. Thinking of Alfie, if you had to swap roles with him for a day, what would you love most about being him and what do you think he would enjoy most about being you?

Alfie is constantly having his ears stroked, I wouldn’t mind that (laughs) and I think Alfie would like access to the fridge!

What's Alfie's favourite thing in the world to do?

He loves to walk in the park, play in the leaves or walk by the sea, and play with other usually bigger, slower dogs. He loves pieces of cooked chicken breast as a treat. He loves to snooze and have his belly rubbed. He loves his friends.  He loves the pub!

Lucky boy! Here are a few quick fire questions, are you ready...

The joy of the unconditional love they give you, and when you wake up in the morning and see that happy face and waggy tail.

And finally, what one life lesson do you think we can (or should) learn from man's best friend?

They just love life, and they teach you to be grateful for each day!

Keep up to date with Rumer’s latest releases and work with For Life On Earth on her website – rumer.co.uk – or social media on Facebook.com/rumerofficial – Twitter.com/Rumersongs – Instagram.com/rumersongs

Why Do Dogs Do That?

As Christmas approaches, we try to think of ways to show our pets just how much they mean to us involving them in our...

Sometimes life can lead you somewhere and you realise you were in the right place at the right time for a life changing moment....

Every year thousands of products hit the pet market from food to toys, treats to technology. And so as 2016 draws to a close, we...

Interview With Bonnie-Jill Laflin: ‘My Dogs Are My Life’

Bonnie-Jill is probably best known for her modelling and work in television and radio as a sportscaster in the US and more recently, China....