The day I chose our latest mixed breed pup was a Saturday four weeks before Christmas Day. Reba and her four sisters were just three weeks old and had been born due to her mother mistakenly being thought to have been spayed, writes Jennifer Bailey.

Mother and I brought Reba home the week before Christmas and both of us, together with my husband Derek, promptly gave up any thoughts of ‘Silent Nights’ while Reba fully misunderstood the ‘We Will Rock You’ idea.

We carefully guarded our little bundle of joy from the outside world until she had had all her jabs and was fully protected to venture forth - Reba had other ideas!! 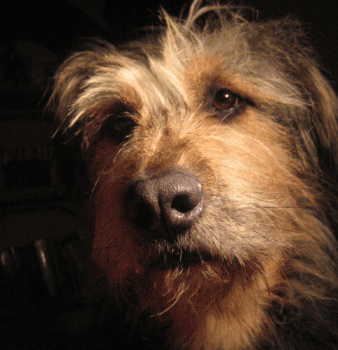 After a week our nights were quiet again and Reba had found a surrogate ‘Mum’ and willing playmate in Poppy, they romped and rolled about at the drop of a hat and when they slept they were wrapped around each other very cosily and all seemed well.

The incident I am about to relate could have come from a comedy film although at the time it scared me to death.

It was early morning and I’d come downstairs in my nightie which was a longish T-shirt, a pair of pants, cardigan and slippers and when the dogs wanted to go outside I let them run onto the lawn then went and sat down in the conservatory to watch without going outside as it was very cold and damp.

Poppy decided that this was an ideal opportunity to make a bid for freedom and went over the wire netting, and through a hedge which runs along the front of the garden beside the road. I shot out of the conservatory, ran up the drive through the gate and to the end of the drive shouting “Poppy come” and trying to keep the panic out of my voice as cars drive along our narrow country road as though it’s the M1.

Instead of having the forethought to pick Reba up as I went, I just opened the gate and ran, naturally Reba ran faster!! She was out on the road in a flash following Poppy, fortunately Pops came back to me immediately bringing Reba with her, I made a grab for Reba who promptly squealed and Pops ran off again in fright.

Because of my recurring back problem I was unable to bend right down and get hold of Reba, so took the only course open to me and launched myself in a rugby tackle on top of her to make sure she didn’t go on the road again, all the time still calling to Pop to come back, which she did.

At this point, whilst I’m writhing about like a soul in torment on the ground with a black and white pup wriggling and sticking bits out from underneath me, a chap drove up extremely slowly and stopped right next to me.

I think his intention was to get out and see if I needed help as I probably looked as though I’d been knocked over and was in my death throes, but Poppy immediately raised her hackles and started circling his car like a tribe of Indians circling a wagon train, so sensibly the chap stayed in his car and just gazed at what he thought must be a lunatic asylum escapee having some sort of fit on the roadside.

I finally managed to get myself into a vertical position and gather my errant canine to my side whilst clutching a writhing and angry pup to my bosom and with all the dignity I could muster I waved a “Thank you for stopping.”

As I walked stiffly back down the drive, my knees and elbows grazed and bleeding, my hair indescribably tangled with bits of twig and other debris and my scant clothing covered in mud and gravel, the only thing I could think was “thank goodness I had my knickers on!!”