Charlene Amoia is best known for playing Wendy the waitress in the hit US sitcom, 'How I Met Your Mother'. She got her big break into showbiz through modelling, but has since had starring roles in films such as 'Seven Pounds' alongside Will Smith and 'American Pie: Reunion', and on TV shows such as 'Days of Our Lives', spin off show 'Joey' and the ever popular 'Glee'.

Kim O'Meara caught up with Charlene to hear all about her own dog, Bunny, and her new short film, 'SHE' which centres around the story of how a rescue dog changed a woman's life.

Tell us about your dog – we'd love to know everything about her!

Her name is Bunny, we think she’s about 7 years old and a mix of Dachshund and Jack Russell Terrier, and she is a huge love bug!

We rescued her almost 2 years ago from an organisation called 'Remember Me Rescue'. The owner had brought her out since she was going to be a harder dog to rescue since she was older but once you see Bunny you just fall in love immediately. She's been a huge blessing in our lives!

I’ve always had pets growing up. We had a bulldog named Maggie and a Cat named Kitty when I was a little girl so I guess animals have always just seemed like a staple to have in a home.

Most of our readers will know you as Wendy from 'How I Met Your Mother' but you made your way into acting through modelling. What do you think you would have done if you hadn't followed that career path?

I feel so fortunate that I stumbled upon acting for it is truly is my greatest passion but if I didn’t find it I think I would be involved with holistic medicine is someway. I’ve always been interested in the body’s natural ability to heal itself.

You recently starred in a short film, 'SHE' alongside your own dog, Bunny. The story is how one rescue dog changed a woman's life and was short listed at the San Jose Short Film Festival 2013.

It's a really touching story with a great message. What did you hope for when you set out making the short film?

We wanted to shed a light on how important animals can be in our lives and the benefits of rescuing those in need. People can see the film on my web page at www.charleneamoia.net under the ‘producing’ link, or here on Vimeo. 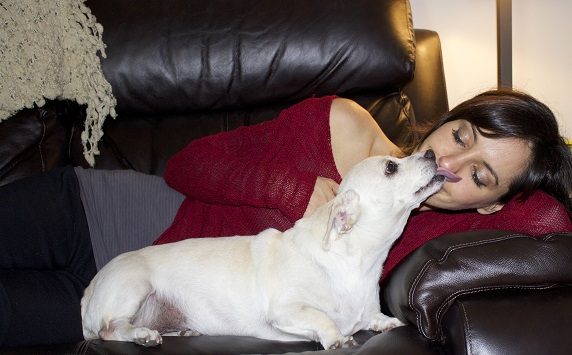 There are over 100,000 dogs in rescue centres here in the UK and an estimated 100,000 dogs were abandoned last year. What would you say to anyone thinking about getting a dog to encourage them to rescue?

If your thinking of rescuing an animal please do it today. Between 3-4 million dogs and cats are killed each year just in the United States, and it sounds like the numbers aren’t much better in the UK. Having an animal at home brings in so much unconditional love and we are all happier with more love in our lives so it’s a win-win situation. Bunny has been such a wonderful blessing in my life.

Motto's. Most of us have them, what would you say yours would be, and what do you think Bunny's motto might be?

I think my motto would be something along the lines of ”Think big and dream bigger” Bunny’s would be “Meat, cheese and cuddles please.”

If you were to swap roles with Bunny for a day, how do you think Bunny would cope being you and what would you most love about being her?

(Laughs) I’d love all the good sleeping I would be doing that day. She would probably say too much work!

Alyson Hannigan (co-star in 'How I Met Your Mother') – Alyson is a very cute and sweet person so I would say a Cavalier King Charles Spaniel.

Simon Cowell – I'd say an English Bulldog - tough looking on the outside but a total softie on the inside.

Kim Kardashian (former K9 Magazine cover star) – She would be a Pomeranian or a Pekingese I think, a beautiful show animal that likes the spotlight.

Will Smith (co-star in 'Seven Pounds') – He would be a Jack Russell Terrier because they’re smart, full of energy and cool.

Big dogs or little dogs – I prefer a little dog because they’re a good cuddle size!

Pedigree dogs or cross-breeds – I’m a big dog lover so it doesn’t really matter to me.

Quickest route or scenic route – Quickest route. I don’t like to spend too much time in the car. Being in LA traffic all the time makes you want to just get where you’re going as fast as possible.

If you were hosting a dinner party and could invite three people, from any era, who would you invite and why?

Oh! Well, firstly I'd invite Audrey Hepburn and then Oprah, and of course Elvis - because I ain’t nothing but a hound dog (laughs).

As much as I love being around people I’m very much an introvert and loner at heart.

Describe the last time you laughed out loud because of something you saw Bunny or another dog do.

Bunny’s starting to have a hard time seeing when the house isn’t lit well.

One day I came home and from a distance she started barking at me. Playfully I started barking back and walking toward her. She came toward me in attack mode until eventually recognising me.

What was great was how she couldn’t stop licking my face because she felt so guilty having been in her tough mode toward me.

Most definitely the constant love and kisses.

Finish the following sentence, my dog is ... spoiled!

And finally, this is always a tough question and often requires a fair degree of thinking time but….if your dogs had the ability to speak and answer one question and one question only, what would you ask them and what do you think that they would say?

I’d ask what happened to her eye, was someone mean to her or was it just an accident? And then I would say, “Who’s a good dog?” and she would say “I am!”

Visit www.charleneamoia.net today to watch her star in 'SHE' alongside Bunny.