As you may know, in 2010 Cesar Millan embarked on his first ever UK tour.

The Dog Whisperer divides opinion amongst dog people. He has many fans and many detractors.

He has certainly caused a sensation worldwide and got people talking about dog training and debating methods, styles and approach. We know, as he’s appeared on our cover, that Cesar Millan tends to attract two distinct opinions: there are those who LOVE him and those who DON’T!

For those who love him, you’ll no doubt be aware that his UK national tour: The Dog Whisperer Live, drew huge crowds of dog lovers keen to lap up his teachings on canine behaviour and dog ownership skills.

But what would a K9 Magazine article be without a debate? 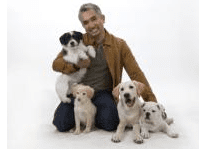 So we asked for opinions on Cesar and present them here. You can add your own using the comments section at the bottom of this page:

It seems that many dog trainers don’t approve, but many dog owners adore the man and cite his TV show as a catalyst for improving their own dog’s behaviour.

His Dog Whisperer books are constantly top sellers globally, here is some of your thoughts on the man who has become, without much argument, the most famous dog trainer in the world...

Michael
Cesar has tremendous self confidence and dogs respect that.
He also has a genuine respect and affection for all dogs. Those attributes combined with his basic set of rules for keeping a happy obedient dog are for me much less complicated and above all, much more effective than those of his detractors.

Rose Browning
If it hadn't been for the dog whisperer Cesar Milan I would not have taken on BB aka Big Boy a half rotty blinded in one eye at 8 weeks old and saved by me with the help of friends family and the PDSA from being put to sleep for want of a 400 pound operation. I was so scared of having a dog whose breed had a reputation and who should he wish to could inflict terrible injury. From day one I used things I had learnt from Cesar's television programmes to always be top dog in our relationship. It was so different to how I had been with my previous dogs but now 3 years on and having almost given up a few times in the first year or two I have a great companion who has never snapped at dog or man. He is a lovely dog whose only fault now is being BIG and desperate to befriend any dog or cat. If Cesar was able to spend some time with us it would be to help me calm him down around cats he wants to befriend and to teach him to wait for people he loves to approach him instead of charging in and licking hands. He also has a big woof which scares people when he rushes up to say hello, tail wagging furiously. We live in a converted mini bus in a field near Glastonbury ,Somerset and I work as a nurse/carer for an elderly couple, oh yes B comes to work too. Cesar you are amazing and I cannot praise you enough. THANK YOU THANK YOU THANK YOU

Susan
You only have to do a youtube for Milan to see videos of him using cruel shock treatment, so much so the poor dog would not stop whining with pain and tried to hide under the chair. At one stage when Milan shocked the dog it turned and tried to bite him. There are other horrendous videos of him at work. Cruelty is never necessary to train a dog. AS for using the shock collars only someone who does not know how to train a dog would use one. It is the lazy cheats way with no concern for the dog at all. Do a google for Milan and you will find he is being sued by a client as his dog was over used on the treadmill, hung up by its collar until it was half asphyxiated to subdue it, ended up with blood coming from its nose. You only see on the TV what they want you to see .. that is a caring clever dog trainer. You dont see the horrible side of what he does or the cruelty. Read through the whole if this report about him. Two pages but worth the read http://www.k9obedience.co.uk/dogbehaviour/behaviourist/cesarmillandogwhisperer.html Milan is also responsible for his helpers at his centre where cruelty is well known to happen, Milan knows it but does nothing to stop it.

Yes a lot of his methods are good methods and do work, but his quick fixes of cruelty are shameful. If they were done in the UK where I live he would be had up for animal cruelty and prosecuted.

Michelle Maloney
I've watched many of Cesar’s shows and find him fascinating, but i do wonder ‘is he really that good??’ I have two Airedale Terriers and they are fine when were at home but when we take them out for walks they change, they don’t listen and they don't follow instructions, its become so bad that if there are other people (or dogs) around they run off and will not come back. They’re not vicious, they just want to play with everything and everyone they see! It’s just a little embarrassing when your out in public and your dogs don’t take any notice of you!. If he came and worked with my dales and I, and changed theirs (and mine) behaviour then I would worship him!!!

Tan
I live in Durban South Africa and am a huge dog lover. I have 5 dogs at home. 2 daschunds, 1 boerboel x (sort of like a mastiff) a ridgeback (south African breed) and a staffy x. They are all bitches and all live very happily.
I have even had a dog behavourist come to the house to give me more tips on being the pack leader and to make sure I was doing all things correctly. All long before Cesar was on TV.
I spend a lot of time reading dog behaviour and training books as well as watching as many doggie programmes as I can. The more I understand my dog the better chance me and the dogs have of a happy calm life. None of my dogs walk through a door before me, I walk first then they follow.
With all that I have read and watched, never have i come across a programme like Ceasar’s that has been so easy to follow and has produced such great results in such a short time. I have tried a few of his techniques and the work fantastically. I think he is wonderful!

I really don’t care that he is doing shows everywhere. He helps dogs and helps people to help themselves to help their dogs. That really is the point for me. Also by doing this, he is reaching and educating more people. If he has found a way of making more money, well good for him is what I say. Why not.

Jackie
I think Cesar has some points that are worthy of criticism….dogs haven’t lived in the wild for 15,000 years and don’t act as their ancestors would…BUT I also think he has an amazing talent for reading a situation, and his views on calm assertive leadership and exercise, discipline, affection are spot on. Like all trainers, we can pick the parts that work best for us and discard the others. I don’t practise or agree with all his methods, but I have certainly benefited from some! He is a great entertainer and a dog lover. I don’t believe he would deliberately ever cause harm to a dog…just some of his ways are a little out-dated. views and methods constantly change in every profession.