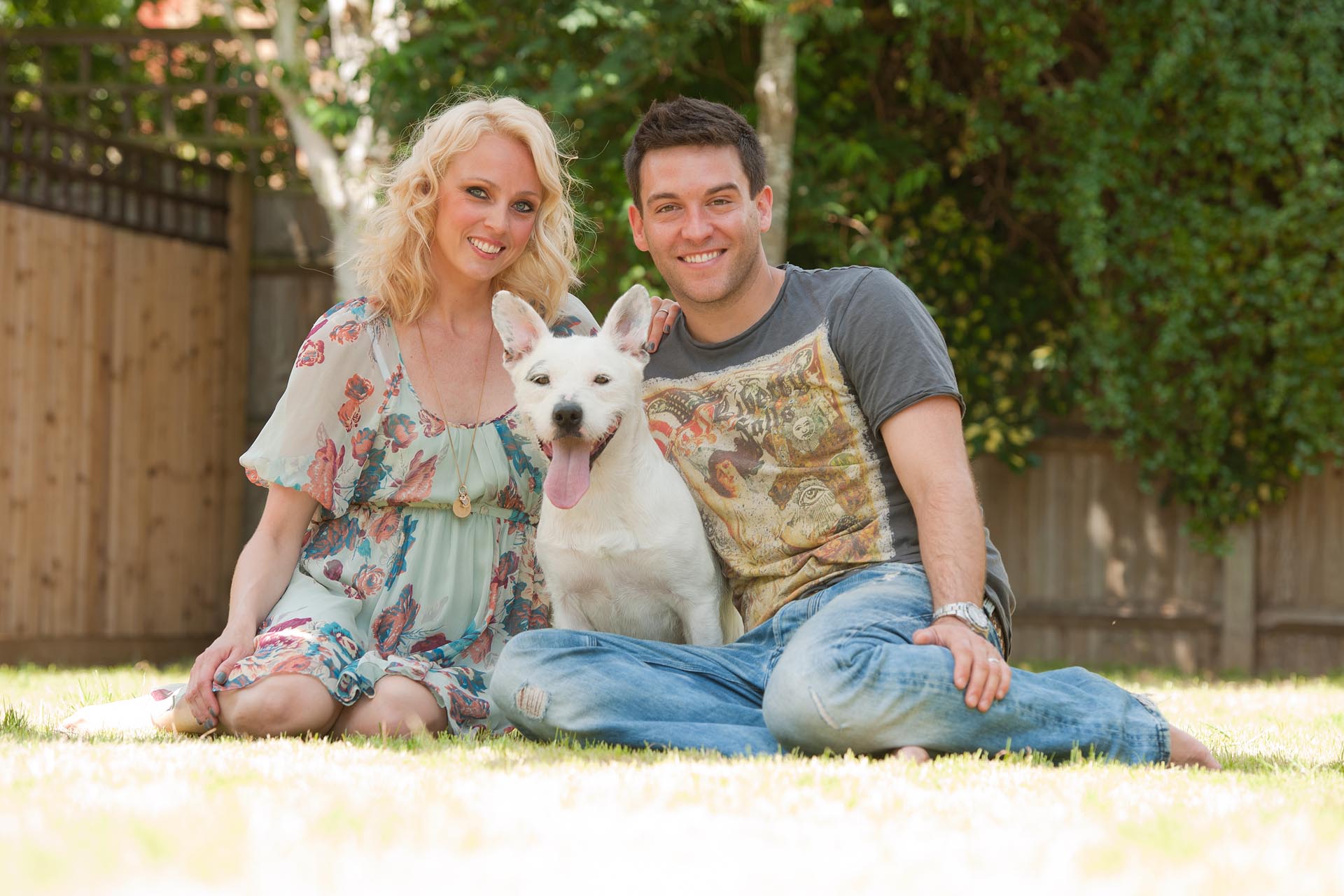 Husband and wife duo, Camilla Sacre Dallerup and Kevin Sacre, are two of the UK's best known TV stars. Camilla is best known for her role as a starring dancer in BBC'S Strictly Come Dancing and Kevin is known for his character, Jake Dean, in Channel 4's Hollyoaks.

Meeting on the set of TV show 'The Underdog' in 2008, they talk to K9 Magazine about how that Summer changed their lives from then on and touring the country in the stage show, Calendar Girls - plus Camilla's plans for an autobiography cross self help book and their support of all things dog, including the Hearing Dogs for Deaf People's latest campaign!

Kevin: Sven is now around 4 ½ years old, I met him when I took part in The Underdog Show. When I first started, I had to walk past four dogs and choose one. When I first saw him he was looking really sorry for himself, he's a white dog but has a pink underneath and his ears were down. The trainer who I was teamed with, Julie, walked with me and she said lets walk back so we went back to Sven and as I was standing there in front of him I wondered how many people had looked at him before, he was 1 ½ years old at the time, and walked away. Once I thought that I said 'ok, let's choose him'. When we took him outside he was like a pinball running around the garden, he was so full of energy, not like how he appeared in the kennel at all.

Julie told me the kennel he has is most likely the only home he's really known, he was found straying in Liverpool/Warrington and that's how he ended up with the Dogs Trust. I used to live around there so I think he was just walking around and looking for me.

When he first went back to the kennels, bearing in mind Julie had said it was like the only home he'd every known, we expected him to be happy to go back in but he wasn't, he was looking at me and didn't want to go back in. I think we were meant to be together.

The show ran for 8-10 weeks I think and so for every show all the dogs would travel up and would be crated, then travel back. Whenever Sven was there he just used to track me, he'd be watching me from a distance and I remember asking them if I could just take him home with me instead of him having to go back but I couldn't while she show was still running.

We eventually won the show, it was a pretty good Summer for me. I came out of it with Sven and met my future wife in Camilla!

Camilla: I had a German Shepherd for 13 years and always wanted another dog but I thought my lifestyle and working so much would make it difficult, I wondered how a dog would fit in but when I met Kevin on The Underdog Show and he rehomed Sven after that show, it was a case of I had no choice, Kevin and Sven were a package and it suddenly all fit. The things I'd worried about weren't an issue, we made it work and everything else fit in around.

Camilla, you're currently starring as Elaine in Calendar Girls touring theatres across the UK. It's another step in a really varied career, how are you enjoying the change from dancing and modelling to acting?

C: Touring is great and we've made it work for Sven, he comes everywhere with us and people love him. He's been a real hit with everyone he's met! Don't get me wrong, touring and finding accommodation has taken a lot of planning, there's more places which aren't pet friendly than you'd expect which was slightly frustrating, but it's worked out perfectly now. In fact I think we know the country by dog walks now!

I love the interaction you get with the audience on stage, I also do motivational speaking and I really love that. I always knew as a child I'd be on the stage and entertaining has been my life so far really.

Are you enjoying working with Kevin on stage?

C: We're very good at leaving the theatre and leaving work behind so that at home we're just hanging out and enjoying being together so we try and keep things separate. We've also had separate dressing rooms and little things like that so that when we're at work, people get to know us individually rather than us as husband and wife. Kevin has worked with some of our cast before aswell.

Outside of work, I also have my health and wellbeing column which I love and Kevin has his photography.

And Kevin, going back to theatre where you first started must be great. What is it about theatre that you love?

K: It's great, I love theatre. I think it's because of the instant gratification you get from the applause, whereas with TV and films, you don't have that. You don't know what people think straight away.

I think being on stage gives you such an adrenaline boost being infront of the audience and Calendar Girls is a great play. It's so cleverly written, everyone knows about the film, the theatre show is more snappy than the film, mainly because it has to be because of the passage of time but lots of people have said it's better because of that.

We're on tour with Calendar Girls from August-December and then January again for the final tour.

[premiumcontent] Many Thanks Camilla & Kevin!