It's funny how our dogs can dictate so many life choices. From the cars we drive to the homes we buy, our pets factor in our decisions because their needs are as important as our own.

Three years ago we became a three dog household. It wasn't planned as such, it just happened. And thinking about it, we became a two cat home too, that's if we count the stray cat living in our garage. The point is going from a home with two dogs, a Labrador and a Rottweiler, both fairly small for their breeds, to a three dog household - one of which resembles a small horse, our car needs have evolved too.

Recently we exchanged our BMW 3-series for a 5-series for the extra boot space to accommodate our dogs and decided to put some of the latest car safety products for dogs to the test. 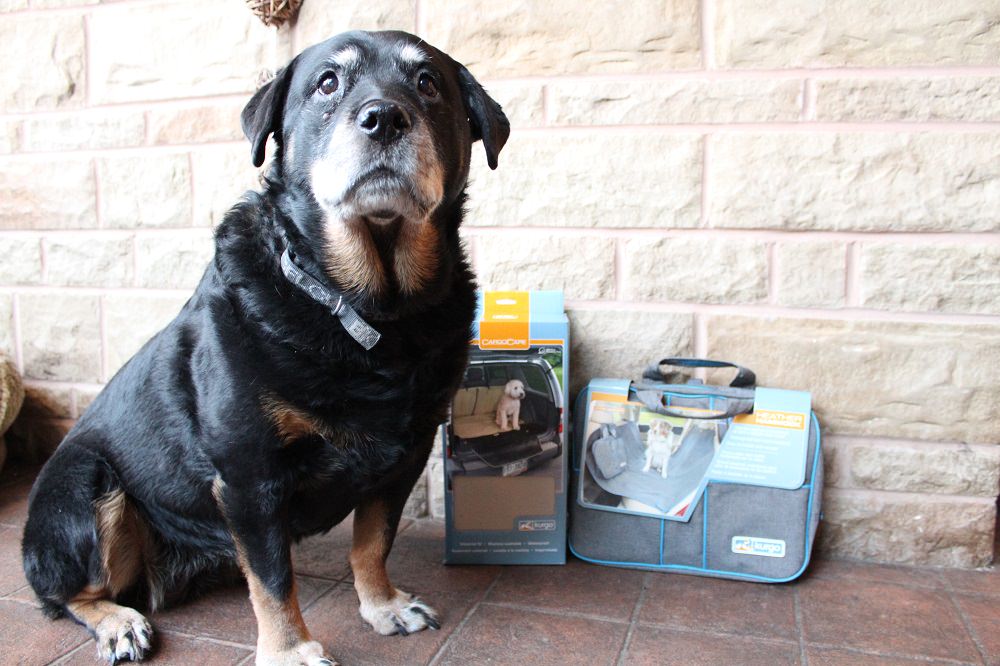 To begin our test we were given free reign by Kurgo to delve into their online store. We chose a Cargo Cape (£59.95 RRP) and Heather Wander Hammock (£64.95 RRP). We then combined the Tru-Fit Harness (£22.95 RRP) with their Seat Belt Tether (£8.95 RRP) and offered these as a competition so we could get another dog owner's thoughts.

With three dogs and 12 paw prints, often muddy, landing in the boot we decided a boot cover was essential because after one use - in fact, just the journey from our door to the car, muddy paw prints covered the mostly beige coloured cape. 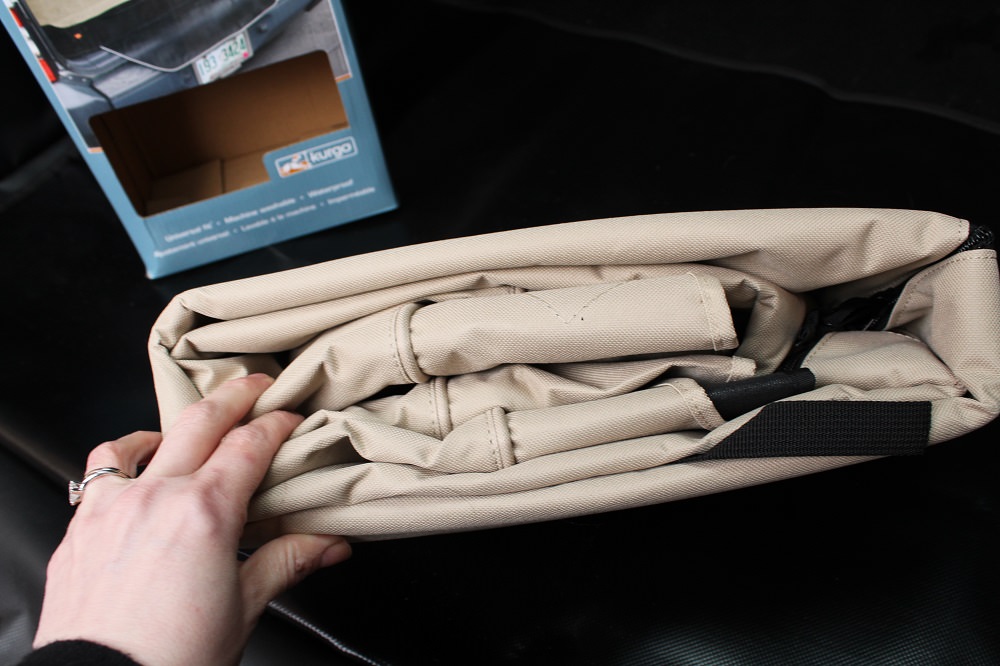 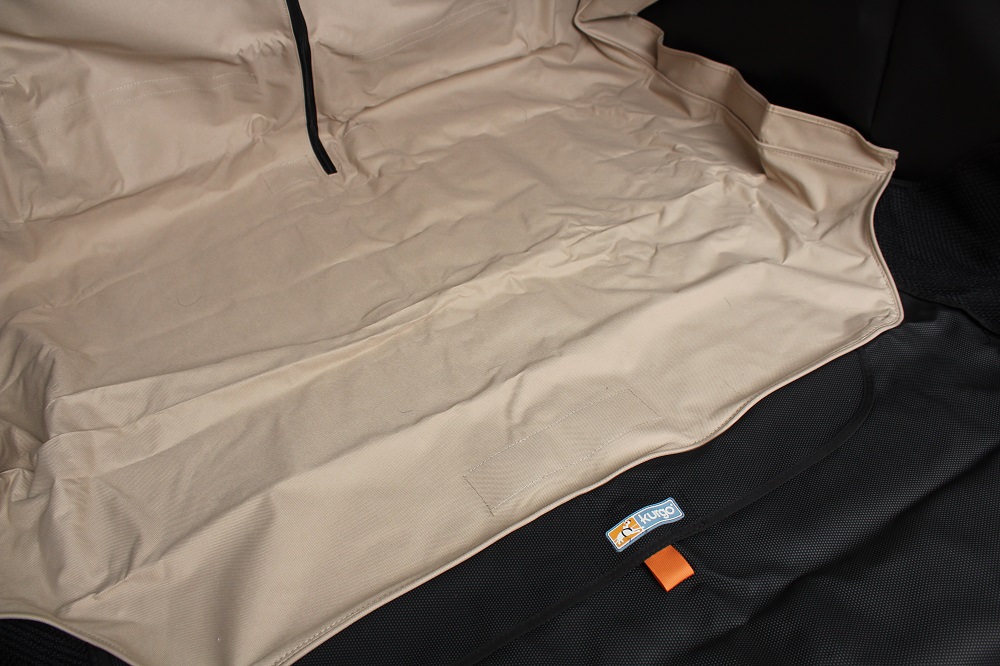 The Kurgo Cargo Cape comes in one universal size and is machine washable, which is handy because it most definitely will need to be washed frequently given the colour. It is easy to fit, pretty intuitive in fact, but instructions are provided in both English and French. 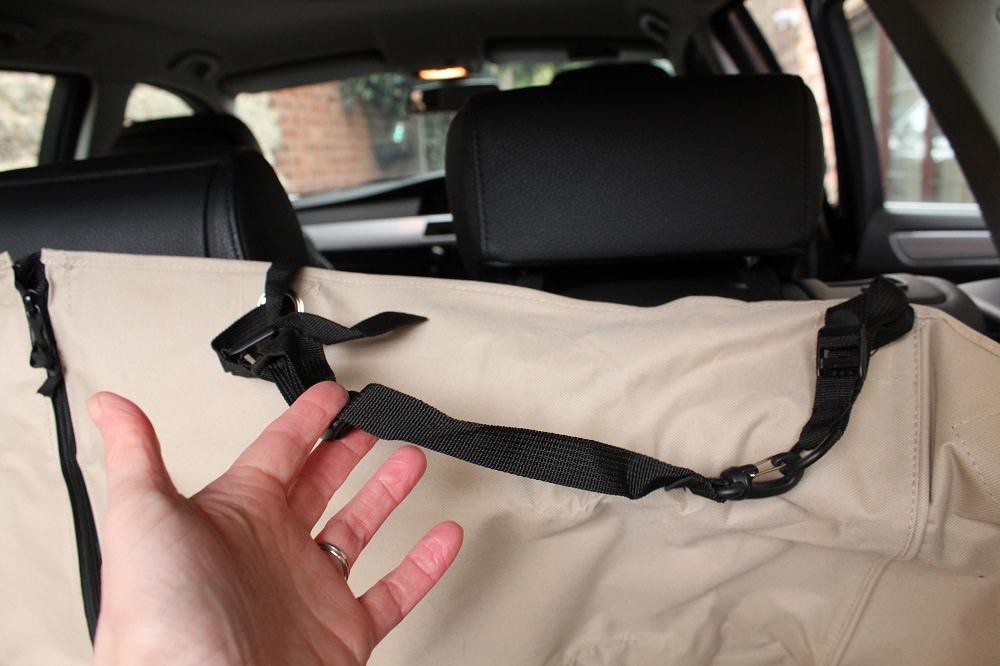 There's a zip at the back so should you want to fold seats, then you can easily do this. And the pocket is a great touch for keeping water bottles, towels, leads, treats or toys safely held in place (unless your dog tries to steal them). 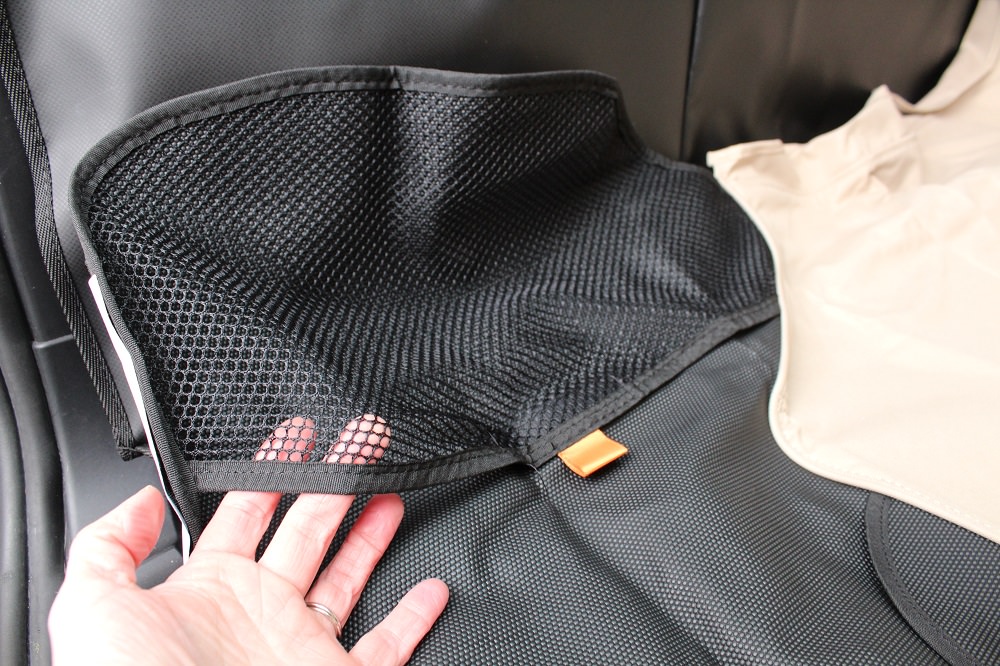 At the rear, there is also a bumper flap which rolls out to protect your vehicle from scrapes and scratches and the velcro fastening holds it in place when it's not in use without any bulking up. 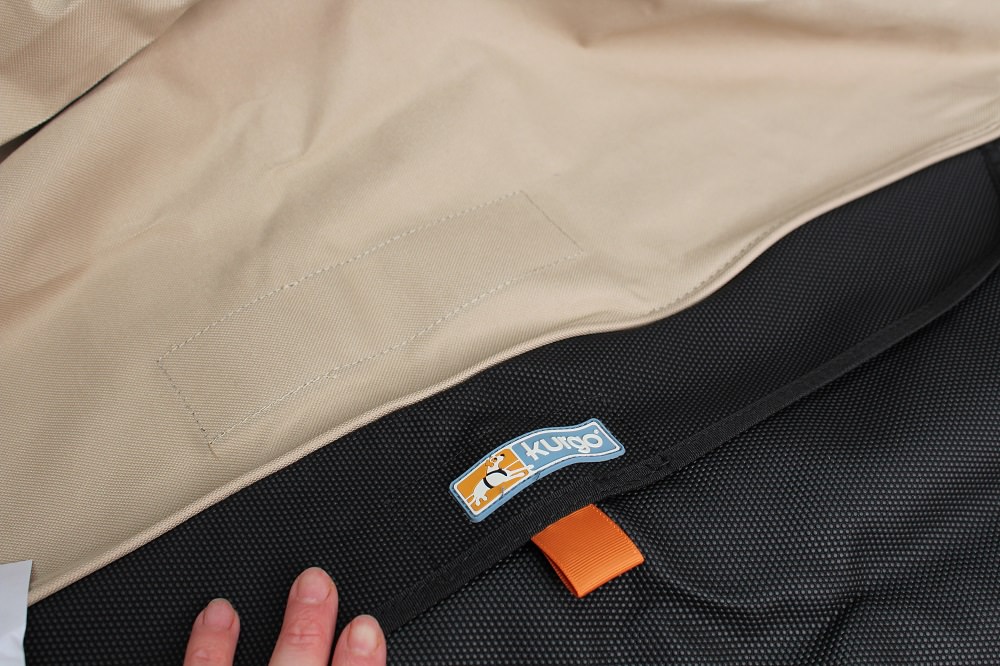 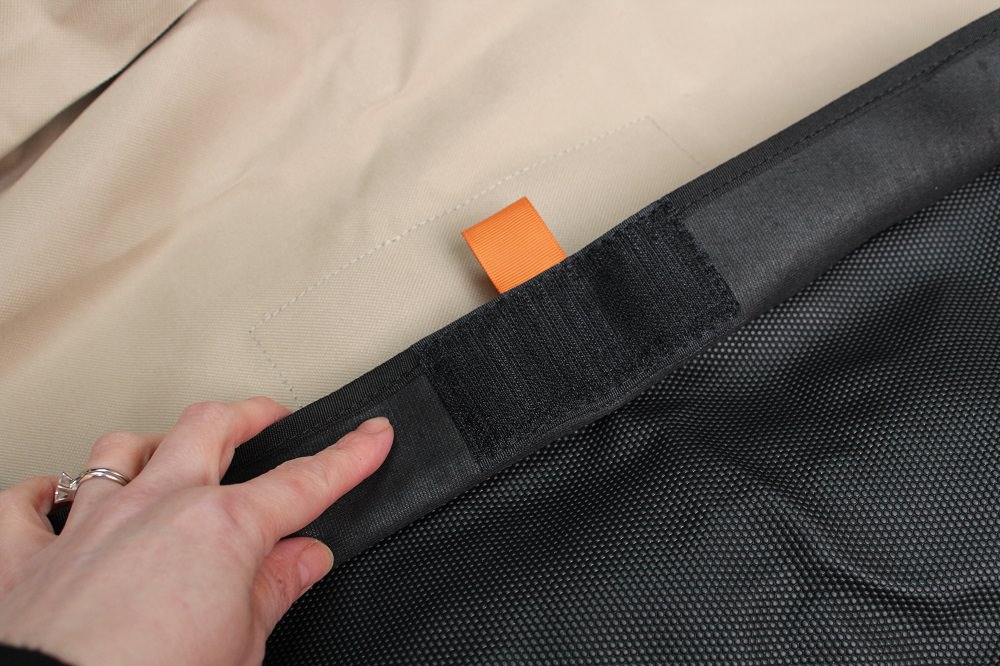 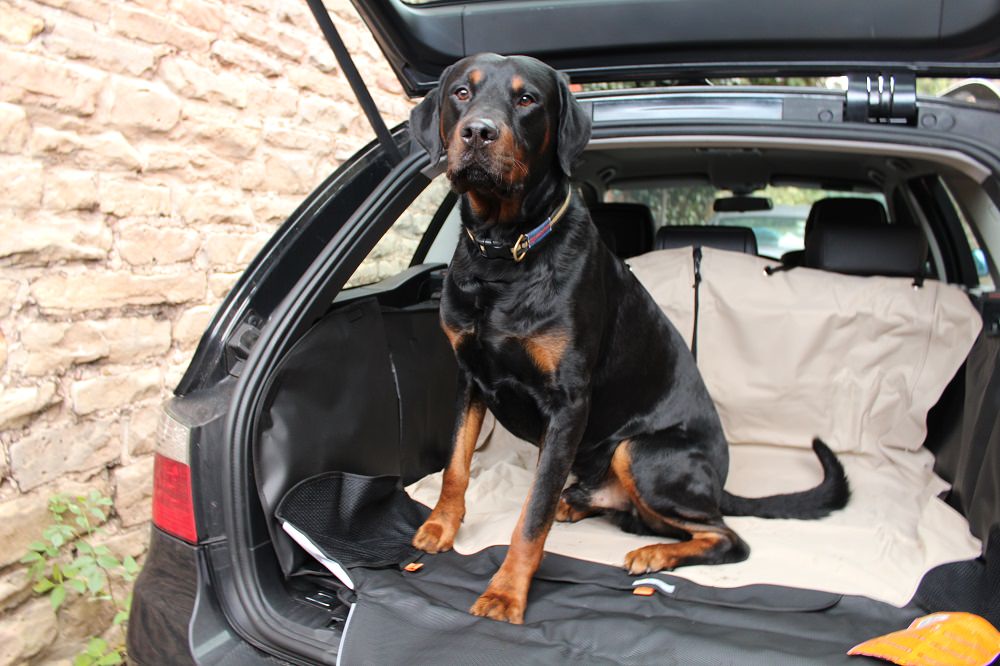 For what its job is, this does it well (last month we reviewed a customised car liner which was a little more expensive but not hugely). It's well made and the pocket is my favourite feature. 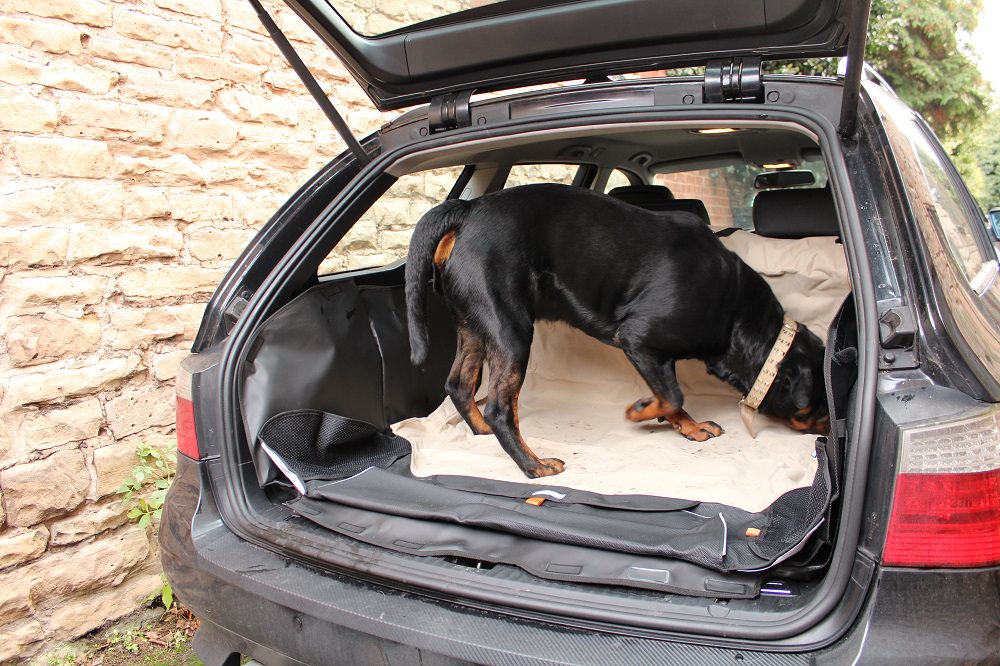 I'd have preferred one that was all black to conceal muddy prints in between washes but for its simplicity in setting up and cost, it will do the job nicely and is at the time of writing available on Amazon with a decent discount. 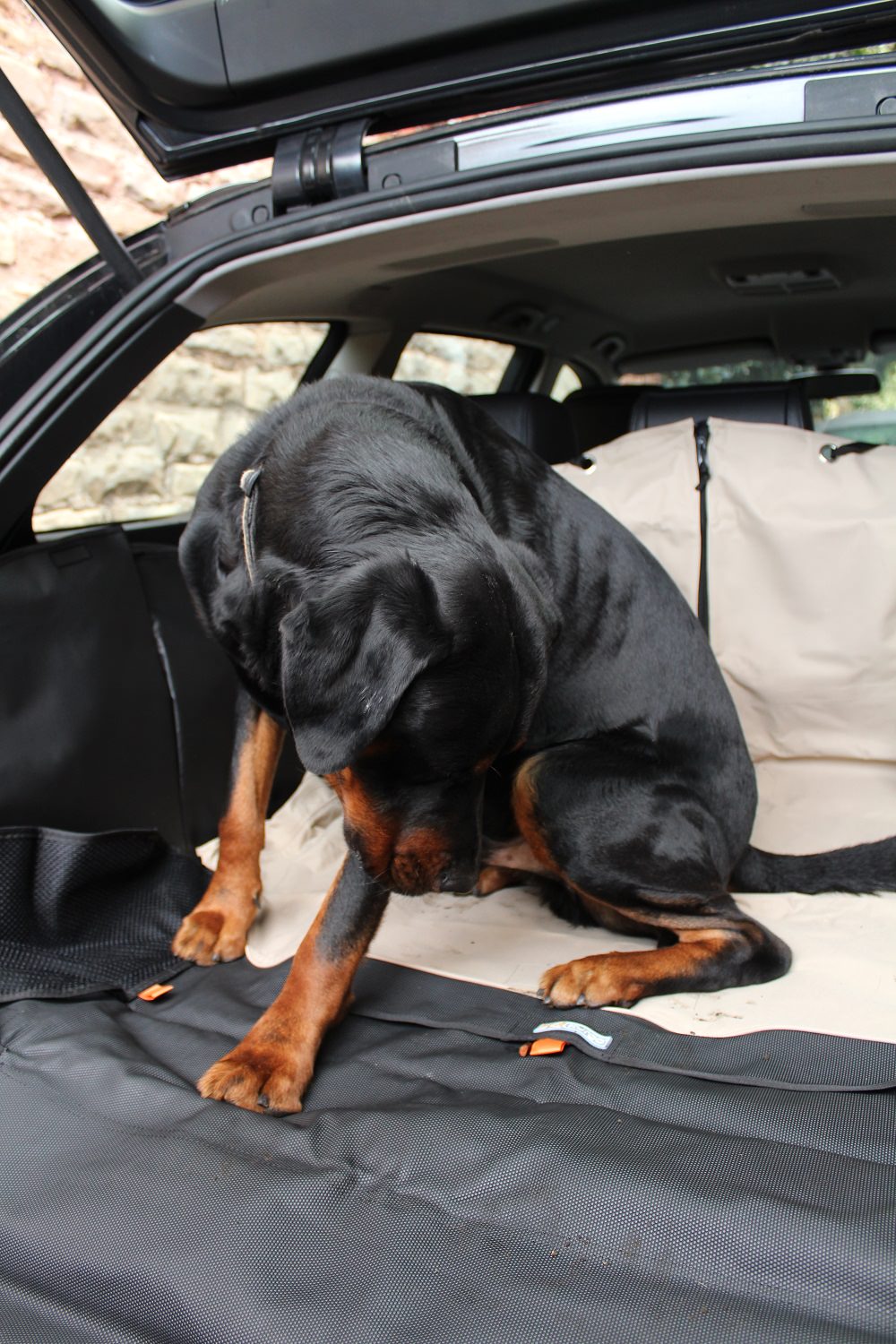 And Danny approves, which is what it's all about.

We chose to review the Wander Hammock for one main reason. Mia. She'll be 11 years old in January and is the smallest of our three dogs as well as the oldest. 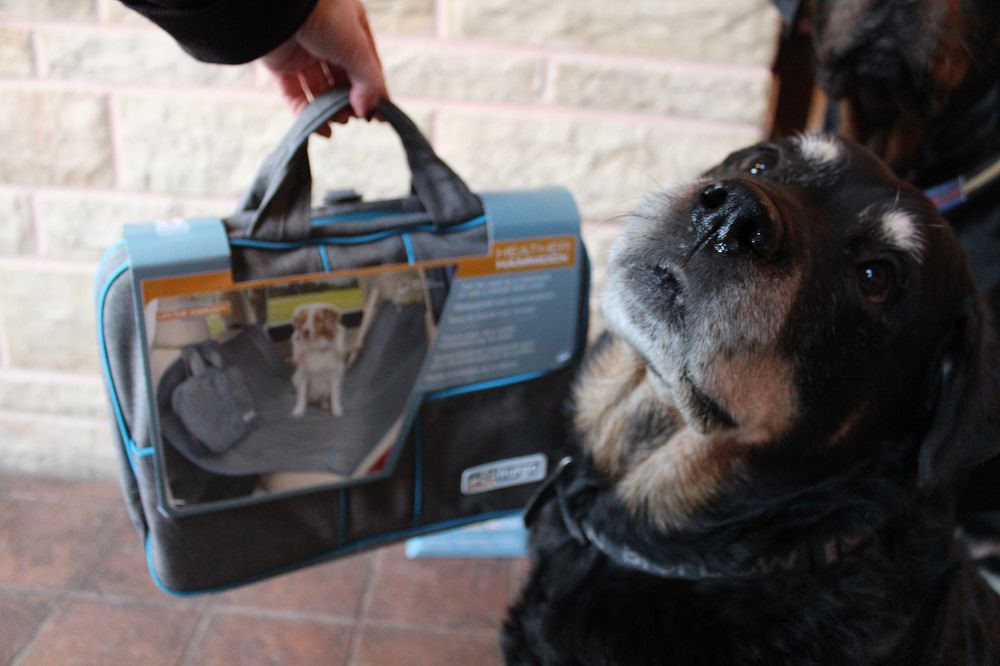 Our two boys, Christopher and Danny, try to be considerate of her but when the hustle and bustle of activity takes off, she's often in the middle of them - sometimes by choice, sometimes by sheer misfortune.

So we wanted to try something out that would mean we could keep the boys in the boot and give her freedom of space to lie on the back seats.

The Wander Hammock is designed to bridge the gap between the front and back seats while keeping your seats free of dirt and muddy paw prints. It also blocks your dog from getting into the front seats. Although if one of your front seats is further back/forward, than the other it'll create a slightly odd shape - like below. 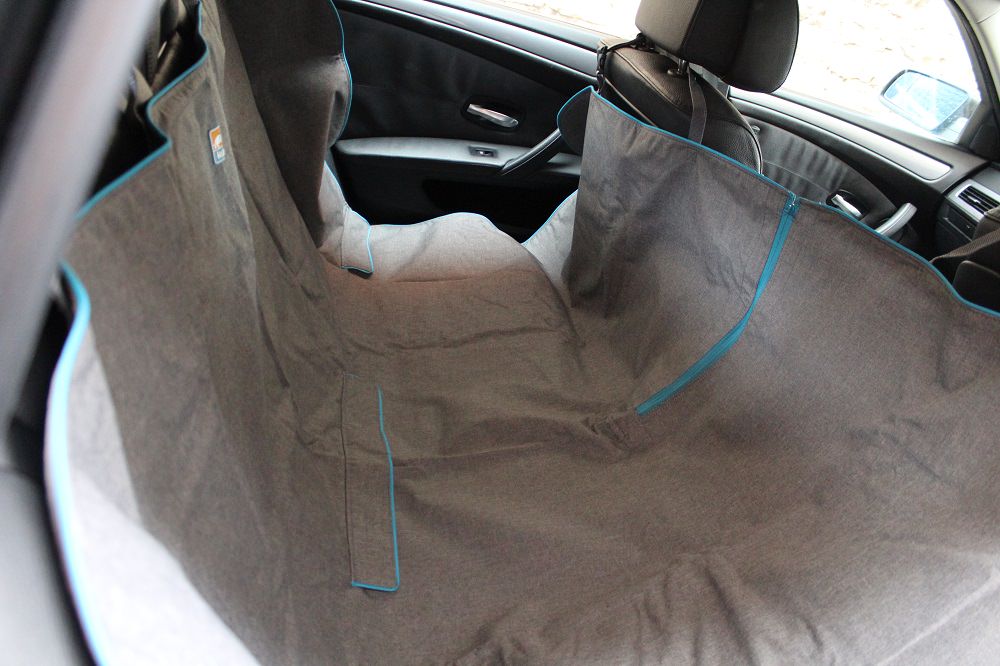 It comes in a really handy bag, designed to match the colour of the hammock, so when it's not in use it can easily be folded back up to sit in the footwell for when it's next needed. 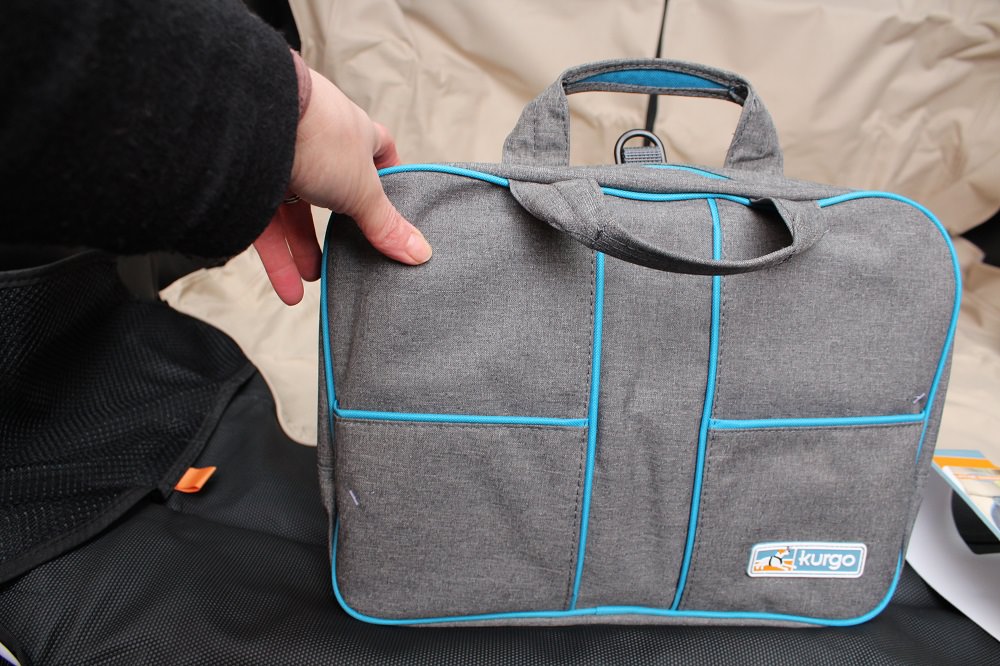 Again, it comes with very simple instructions but was intuitive to set up for Mia to test and there are six points of attachment, four of which are held in place around headrests to the front and rear. The other two are adjustable elastic wires, shown below, which holds it in place under the seats. 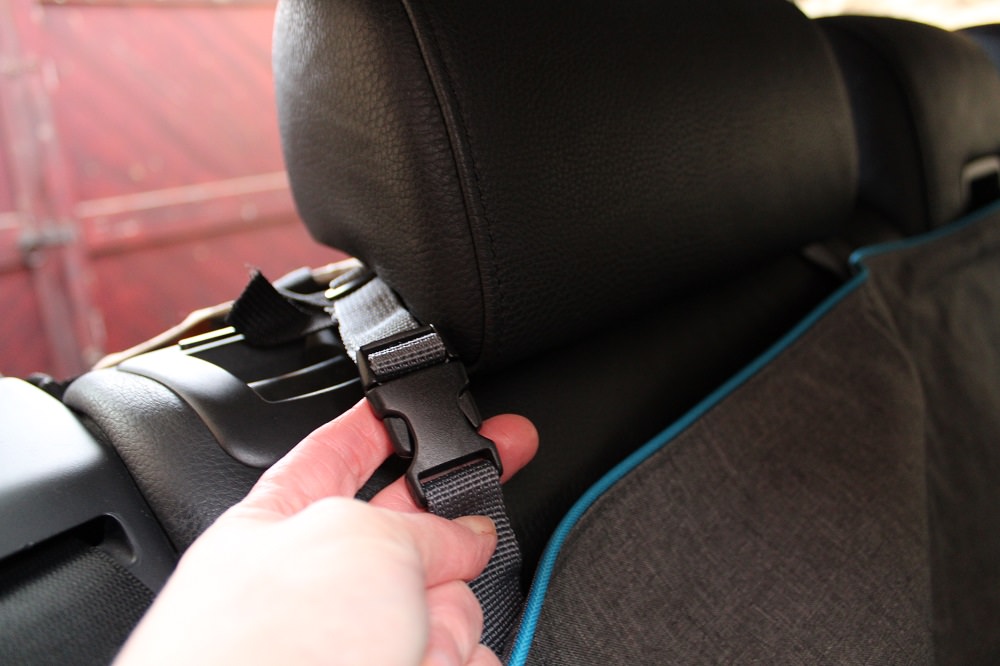 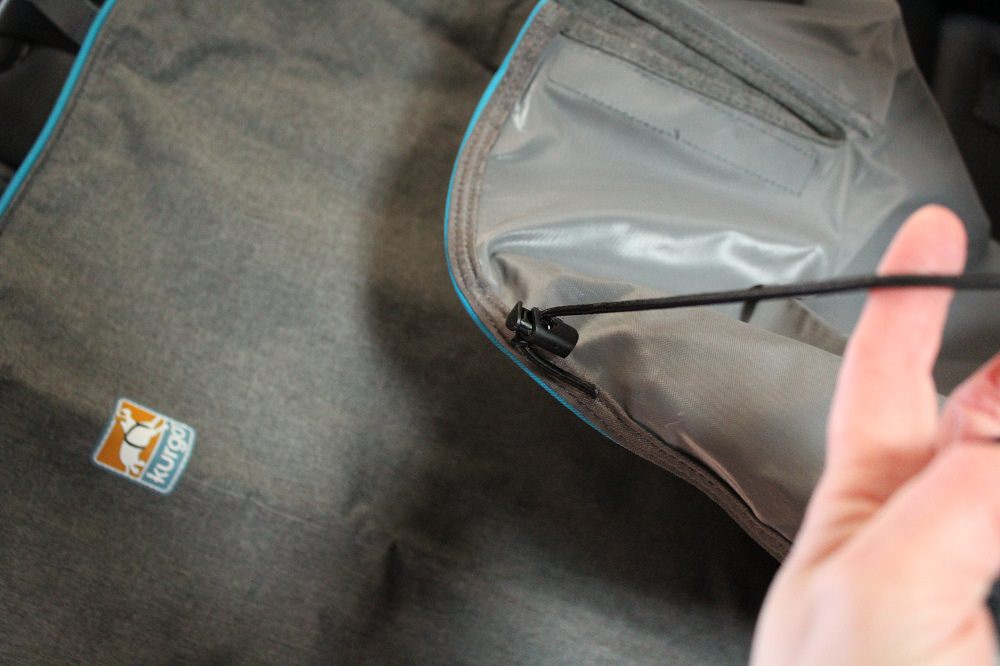 I didn't adjust any of the fastenings on these until I knew what sort of leverage Mia needed for comfort but followed the guidance as to where the majority of hanging should be on the seat (on the seat area rather than footwell area) so as to give the right level of support and comfort. 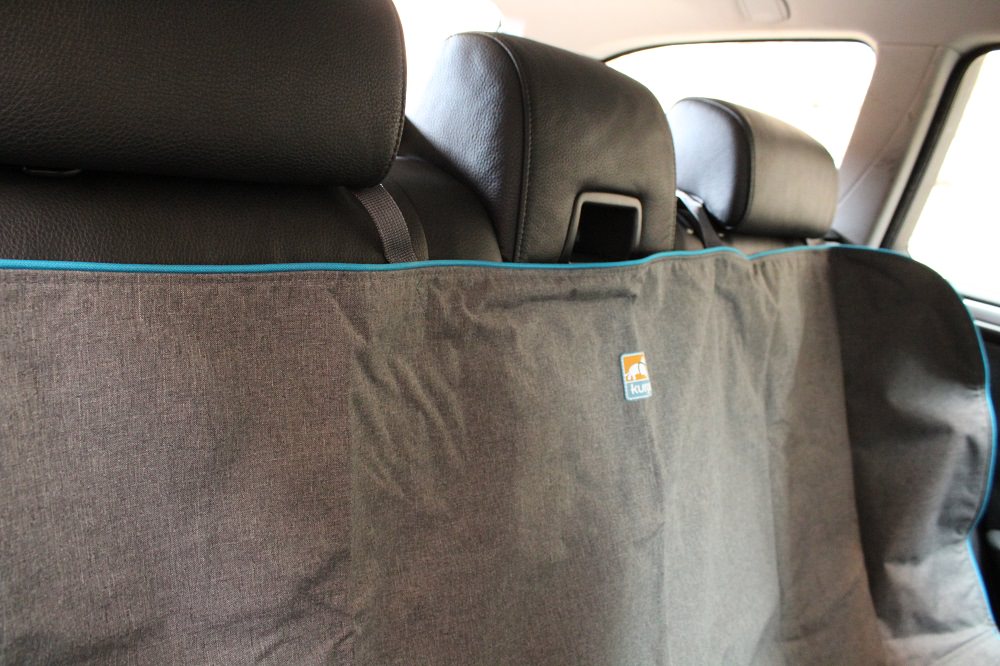 The design is clearly very well thought out with blue piping indicating areas beneath to expose space for seat belts, for example. It's also washable on a cold wash, which again is an essential feature. 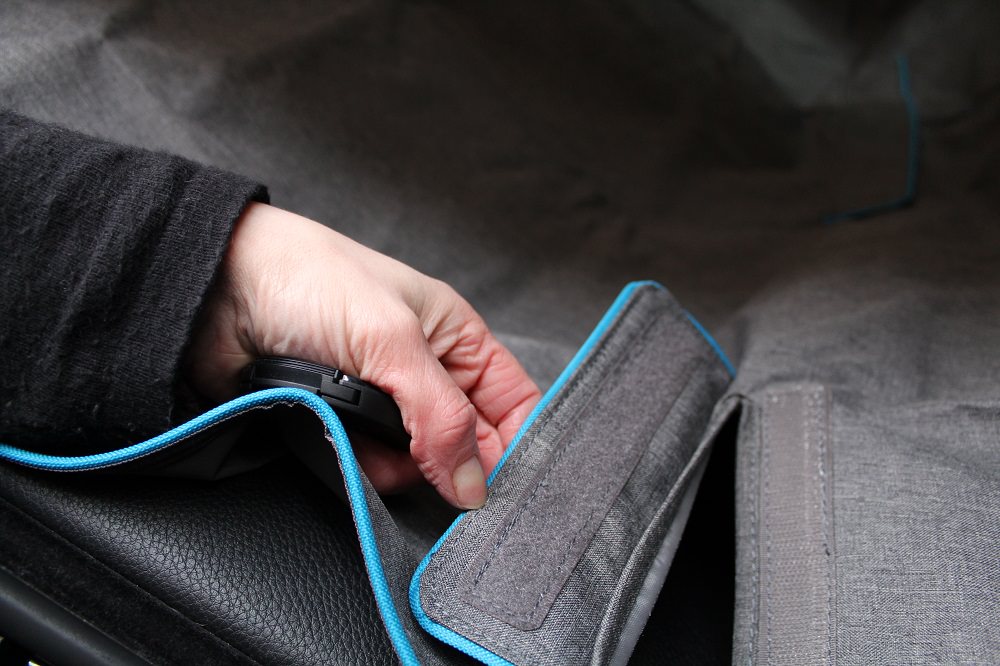 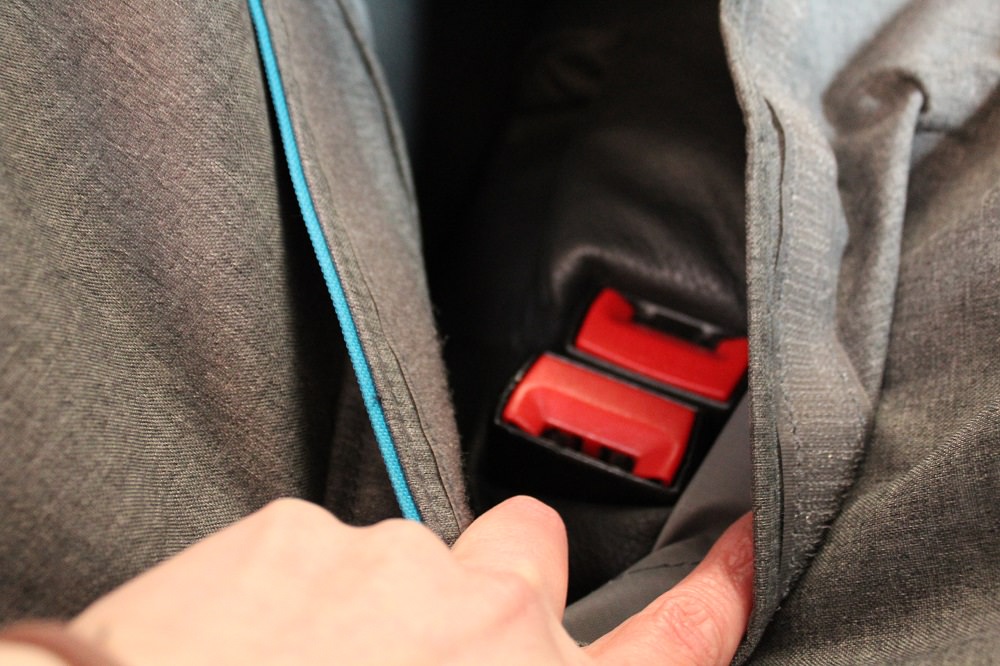 As a concept, it's great but I was worried about whether it would give her enough support.

Although Mia got in absolutely fine, her excitement at going out meant she didn't settle down that quickly and her turning circle is similar to a JCB now she's older (hey, I'd do no better so no judgement here), so she kept having to back up across the seats. 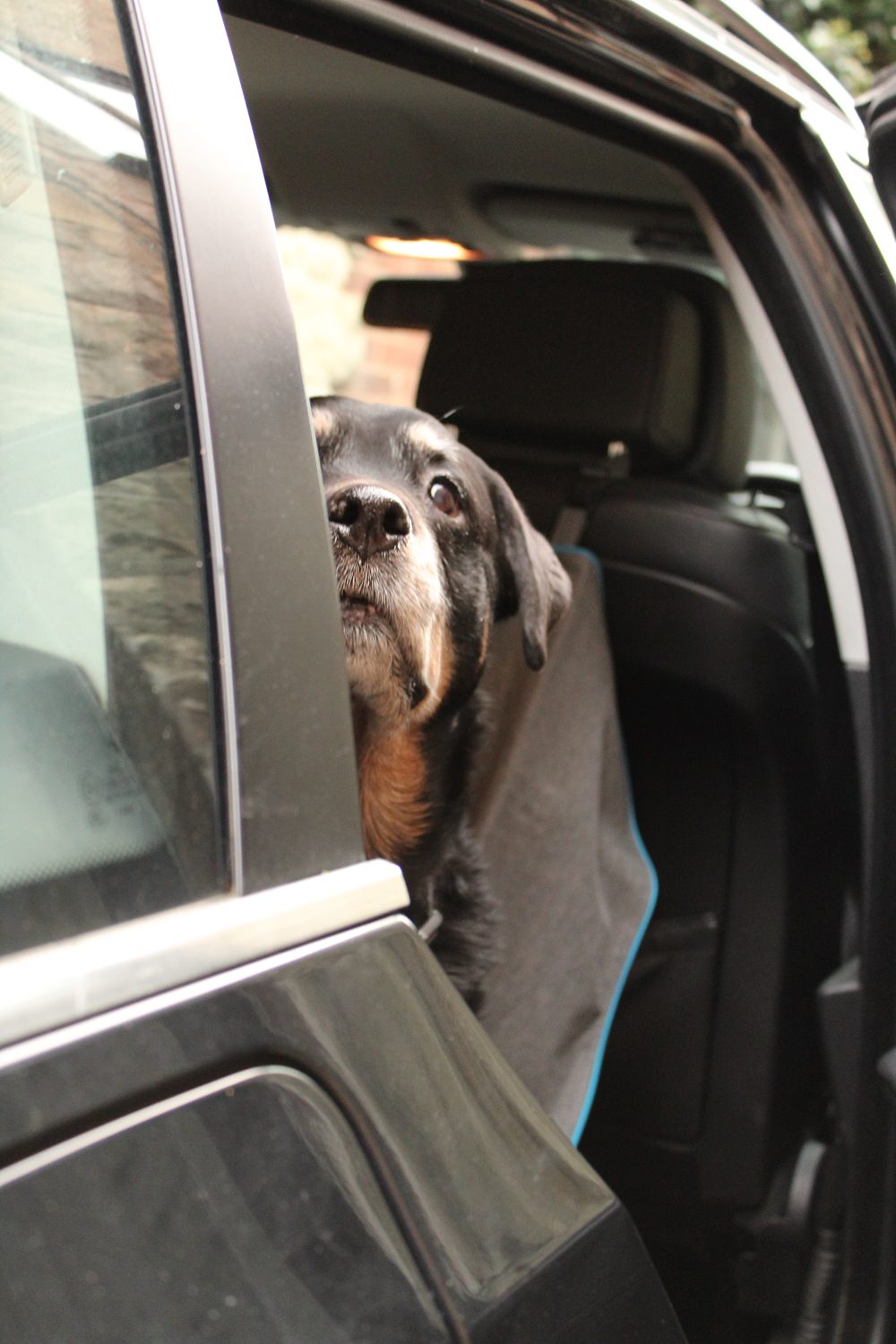 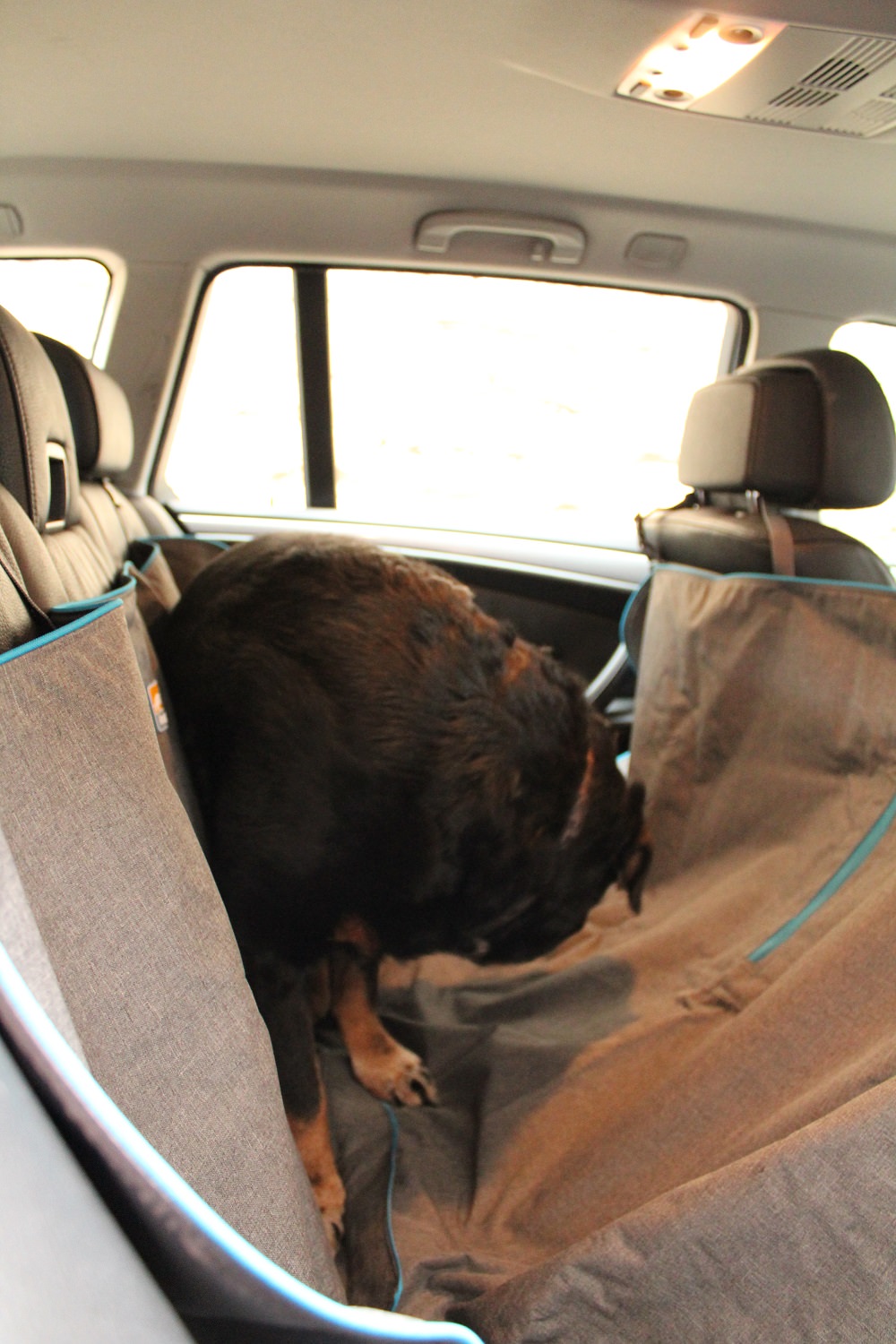 But she's clever and soon learnt what to do, and it did exactly what we needed it to for her - which ultimately was to keep her out of the boys way, but close enough to keep an eye on them. 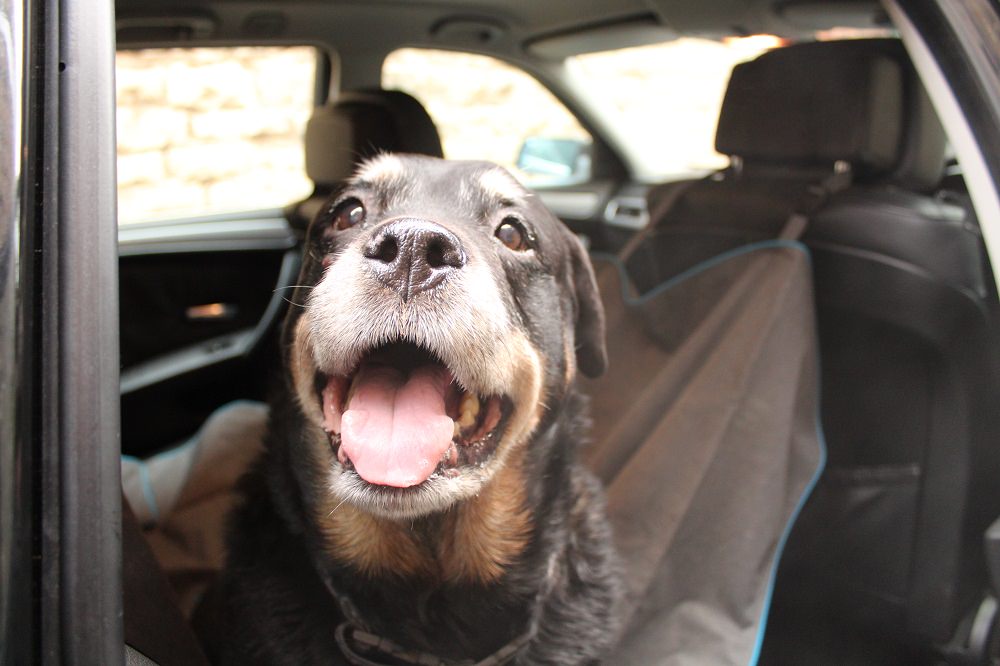 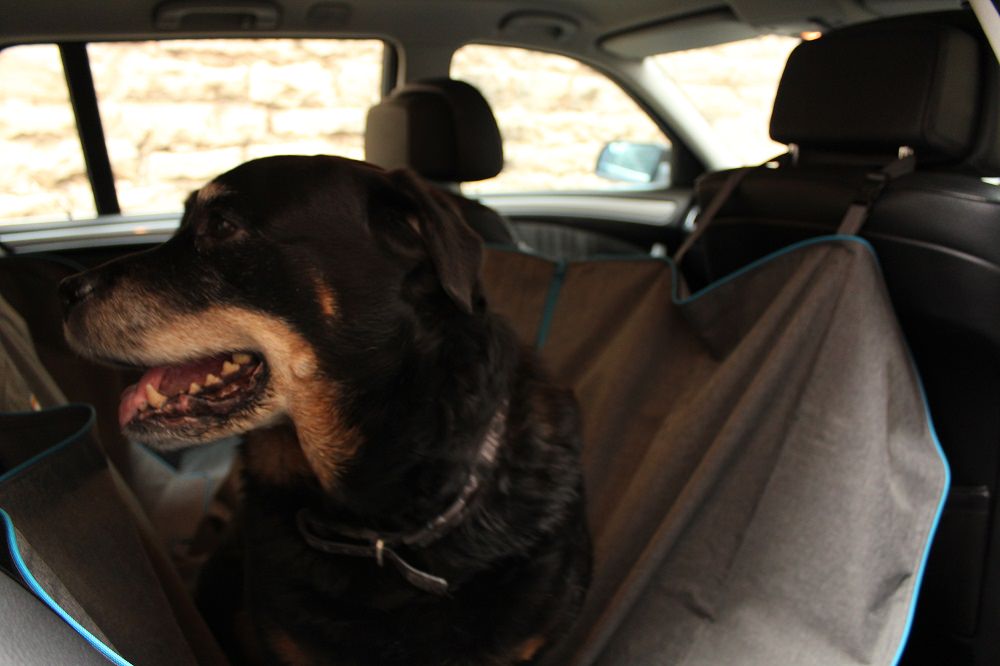 So What About the Kurgo Tru-Fit Harness & Seat Belt Tether?

With the guidance of the team at Kurgo, we paired the Tru-Fit Harness with the Seat Belt Tether.

They told us the Tru-Fit Harness had all of the benefits of their standard harness, except it has 'enhanced strength' which ultimately means it has the added benefit of Kurgo’s innovative Nesting Buckles. 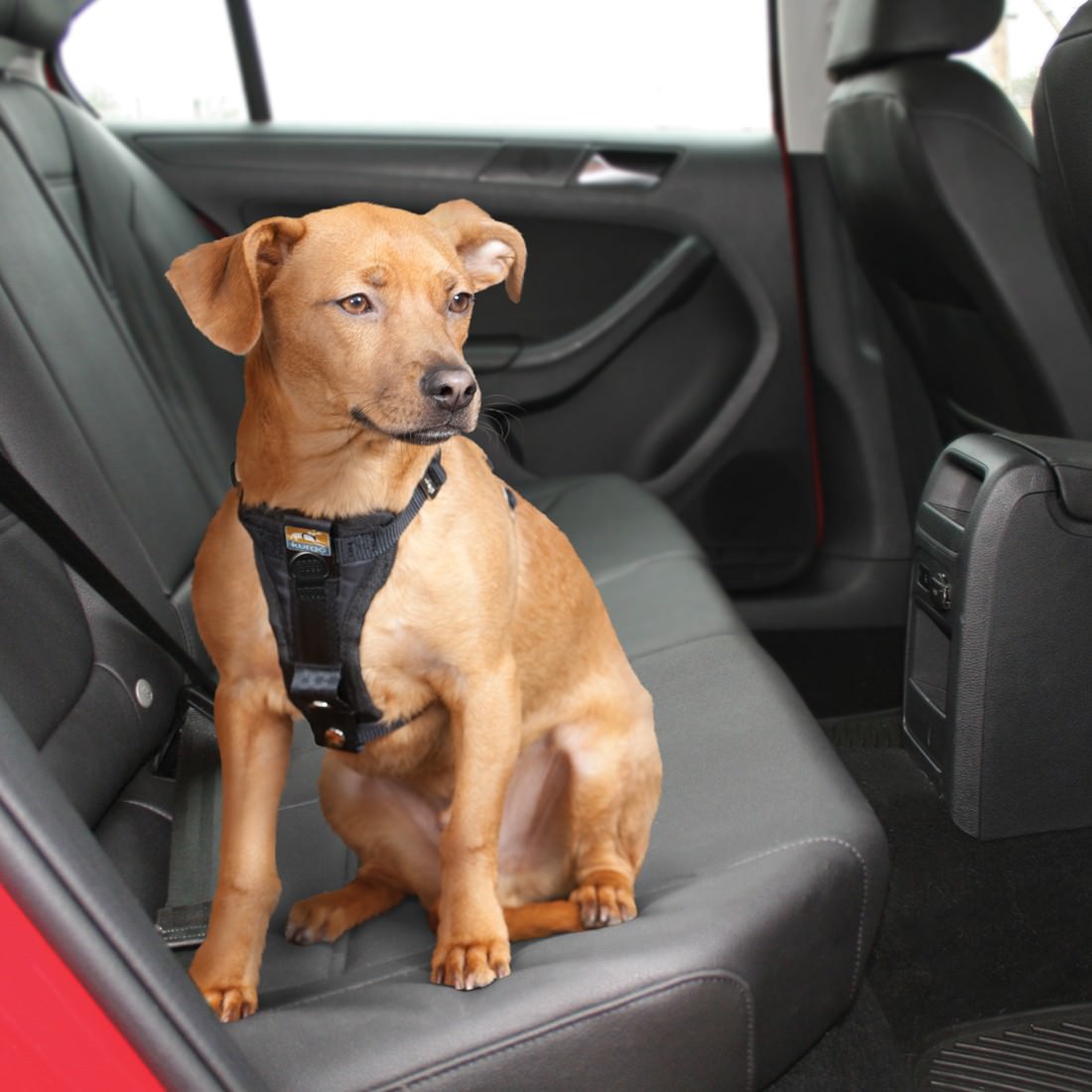 The in-car harness is fully car crash tested and designed to be quick and easy to put on. It slips over the dog's head and is clipped around their mid-section. You then choose from the five adjustments which size best fits your dog and attach the seat belt tether to your seatbelt to keep your dog safe. 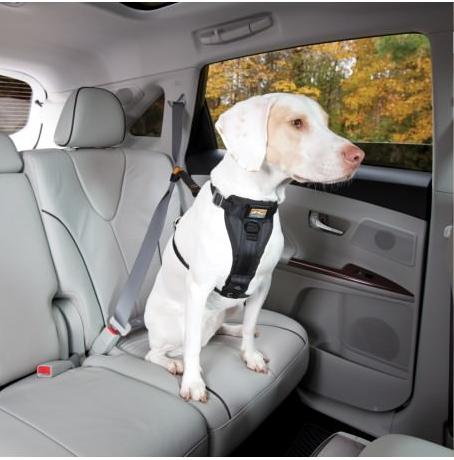 Anne Carpenter and her rescue dog, Remus received this in a medium size in red. 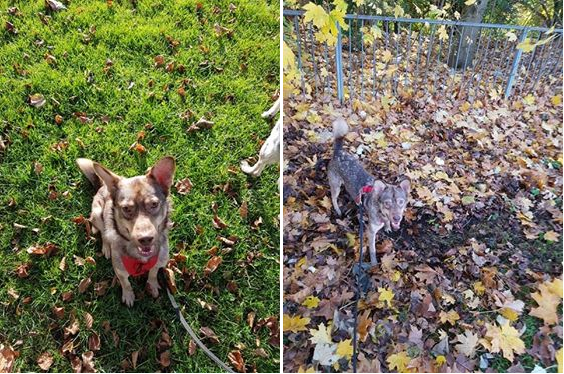 Here's what Anne had to say, "It's great in the car and sturdy. It is a lovely strong harness, although I did have a bit of a struggle to get it on as Remus is a wriggle butt. I'm impressed with its strength." 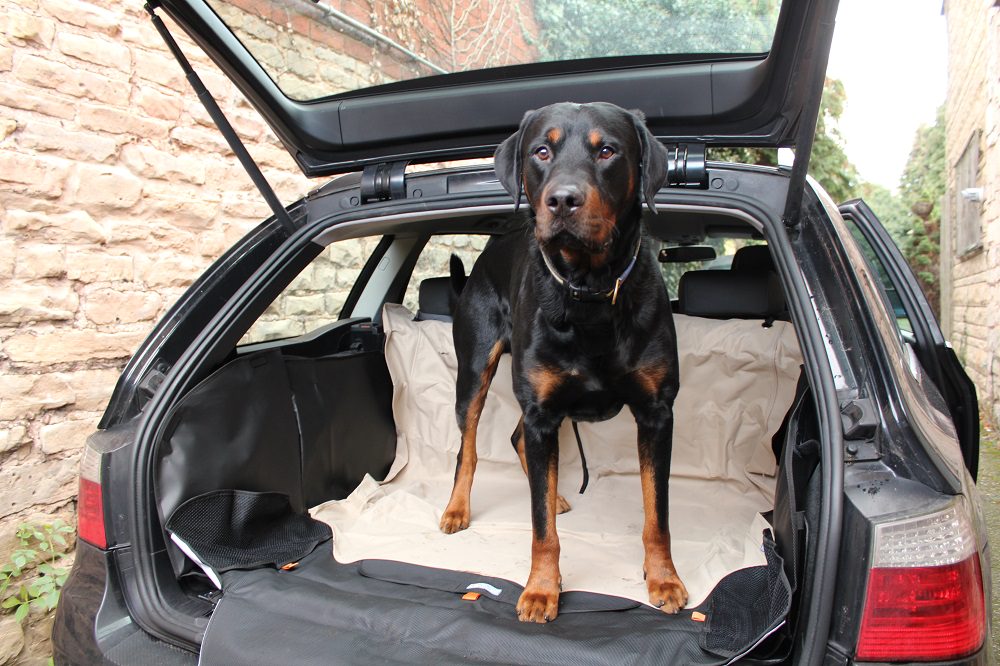 Thanks to Kurgo for sharing some of their car travel products with us this month.