Some folks firmly believe that people come into our lives for a reason, saying there’s no such thing as an accidental meeting.

I think if that’s true, the same has to be said for how we meet our dogs because if I really think about the dogs I’ve loved and owned over the years, who they were (or are) and who I am at 37, there’s probably a piece of each of their characters in me. I care, like Chloe. I’m stubborn, like Mia and Jackson. I’m anxious, like Danny. I’m protective of my family, like Chris. I raid the fridge every now and then, like Bonnie. The experiences I’ve had along the way with them undoubtedly shaped me.

This month I caught up with author Kate Spicer who introduced us to her dog, Wolfy and tells us how life has changed since she adopted him. 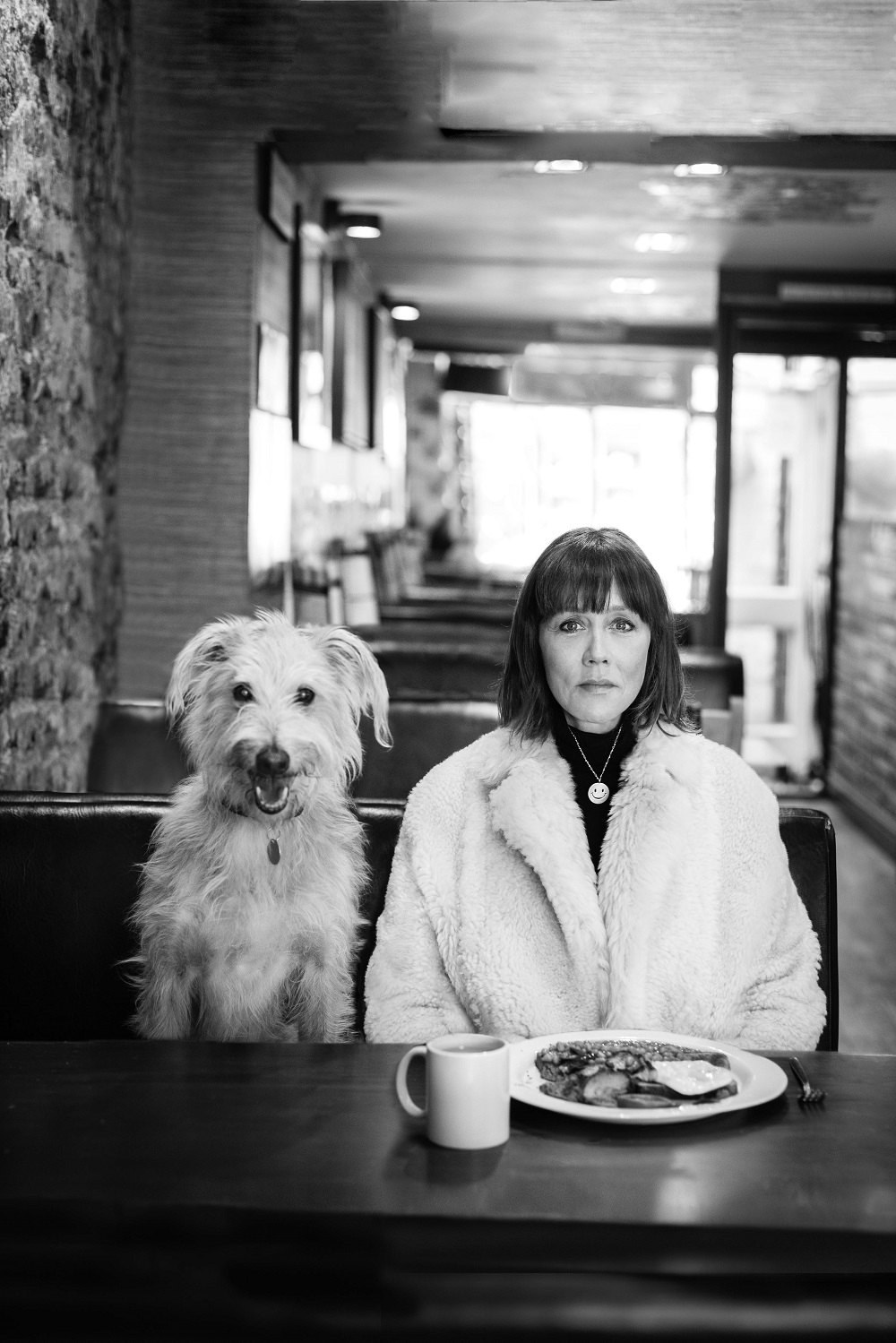 Hi Kate, thanks for your time. How did Wolfy come into your life?

I had long thought about having a dog but felt I wasn’t mature enough or settled enough or rich enough (until five years ago I lived on a third floor one bedroom flat) or, well, just enough to own a dog. I’d had a really cool cat in the early noughts who, in the end, went to live with my Mum in the country because I wanted him to have a better life than being a third floor flat cat.

I realise now, that back then I was enough to own a dog, but I did travel a lot and perhaps it wasn’t the perfect time to have one. To be honest, I think I could have got a dog earlier on because as long as you give a dog two walks a day and a few, what I call, peepoo potters, a quick turn round the block to wee and poo, they can perfectly well live in a flat as long as they aren’t nightmarish shouters.

As I really wanted a Lurcher, and proper Lurchers don’t bark, I think a dog like Wolfy would have fitted in my life really well some years earlier, but the big thing was, I didn’t think I was enough to be an owner. I had psychological blocks plus my family always told me that it's cruel to keep a dog in London. Neither of these things had any grounding in truth or reality, it turns out.

The change came when my boyfriend and I moved into a bigger flat together, I felt a very strong desire for a dog, we talked about it for a long time and explored the dog walks nearby.

I started looking at dogs up for adoption on the rescue websites and especially, I scoured dogsblog.com every day. It took us a while to find someone prepared to let us adopt but after a couple of months, we went to a service station on the M25, handed over £160 and took possession of a third hand Lurcher called Merlin, who I renamed Wolfy. 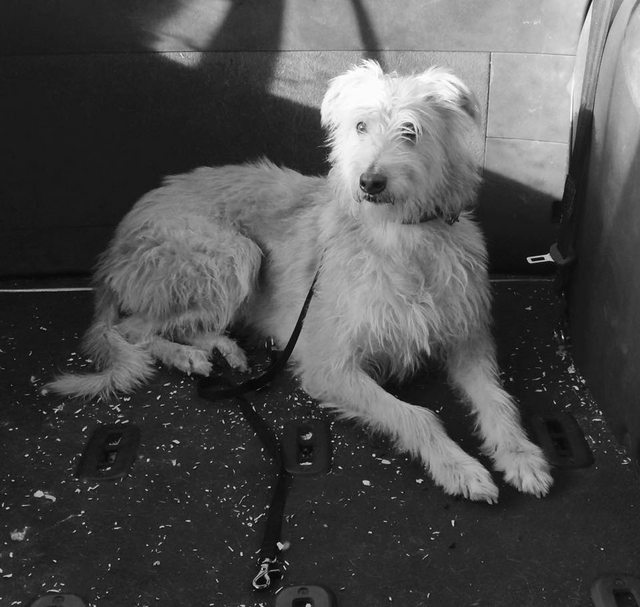 Did you grow up around dogs?

There were always dogs in my family. My Dad gave my Mum a Dalmatian puppy when I was born - when they lived in a small flat in South London - not a very sensible gift, but I grew up with that dog and she died next to me on the sofa while I was watching kids TV after school when I was about 14.

There have been lots of dogs and I’ve had very energetic relationships with them, lots of walking but not so much adoring them like I do Wolfy who is my first dog as the proper owner.

I own a rescue dog and he’s changed a lot over the years as he’s become more secure in knowing who his family are and that we’ll never abandon him. Has Wolfy changed much since you adopted him?

Wolfy is a very mellow dog, he spends a lot of time just lying around and trying out different soft surfaces. He makes me laugh a lot because as his owner I spot little nuances and sleeping positions he has and they tickle me a great deal.

His personality has changed since we got him nearly five years ago when he was probably about four or five years old, I’m not sure as no one knows his history.

Here are ten things I know about Wolfy:

1. He finds puppies very annoying and is most attracted to dogs the same shape as him (sighthounds).

2. He likes sniffing other dogs bums and brief encounters but after that, he prefers it just be him and his owners.

3. He is keen on biscuits and all bits of animal but no thanks to vegetables.

4. He maintains a pretty steady slow pace and occasional shifts up to a canter and even more occasionally goes full tilt, but when he does go into his double suspension gallop everyone stops to watch.

5. He has a beautiful calm and stillness to him that makes me think he is a very old soul indeed. Next to my Dad’s manic Cocker Spaniel, he seems like a rock surrounded by running water.

6. He has become more and more affectionate the longer we have had him. I had no idea that dogs can be so loving. Most days, more a microsecond, he will give me a ‘hello’ greeting of the briefest, tiniest lick on my face. It’s his good morning kiss and it’s so brief and human and polite and sweet. It took a couple of years to discover this. 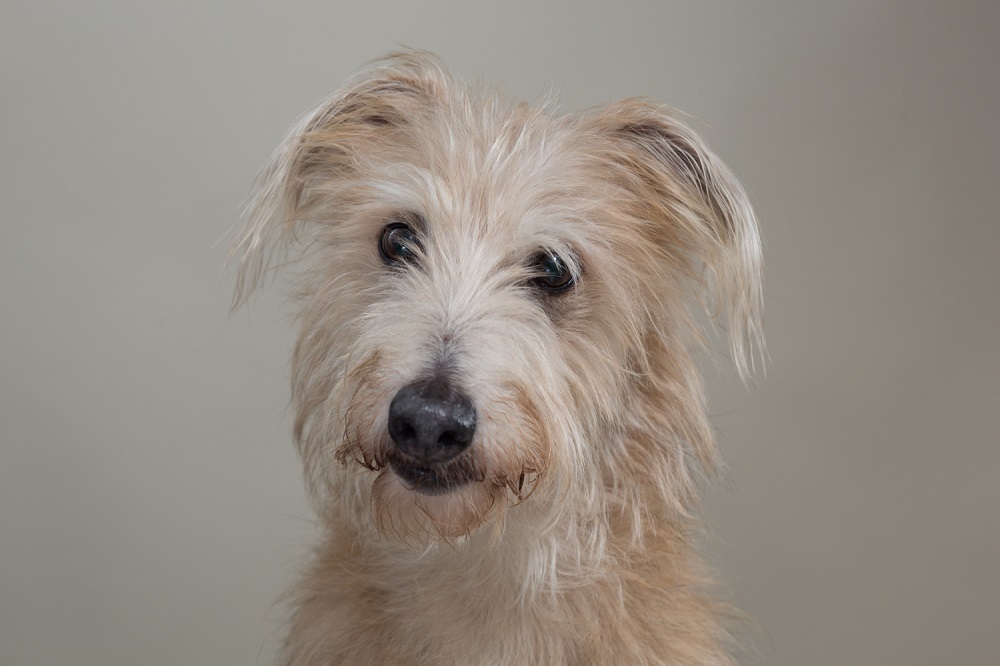 7. He really does not like being away from his family, from me, primarily, or my boyfriend. He likes to be near his family, though he enjoys the odd holiday with my boyfriend’s mother with her massive open fires, comfy sofas and lavish way with the doggy biscuits.

8. When people see him, they smile. If they need some love, he will wander over and lean into them. I wish I understood more about this, the behaviourists always say its to do with food, but I know it isn’t. When he went missing and was first found, he gave my boyfriend and me incredible welcomes, he was so weak but the tail wagging went right up to his ears and after we had finished our massive hugs he quietly walked over to the guy who found him and leaned on him calmly and steadily, I try so hard not to anthropomorphise my dog, but I believe it was his way of saying thank you.

9. He loves his chest being rubbed and will lift the leg that is uppermost to invite you to go in and scratch.

10. He is incredibly patient (apart from with aforementioned puppies).

I realise how deep the connection is with a dog, with a cat too probably, but I think a dog and owner’s life is deeply intermeshed, and that many dog owners are actually like lovers with their dogs, platonic obviously. I know now, a lot of people are deeply in love with their animals and all this love buzzing about is pretty cool. Even mothers of kids adore their dogs.

There are equally people who just own dogs and don’t seem too attached, these people shouldn’t have dogs unless they have a few of them and the dog can find its pack among its own species. I am very reluctant to ascribe special characteristic to women without kids and their dogs. I am in denial, I think. Come back to me in a year or two, perhaps I will be able to see the ‘fur baby’ thing a little more clearly but I loathe the idea that we make dogs our baby substitutes. The love is there but the relationship is different.

Wolfy found fame a few years ago when he went missing and the story of his disappearance led to your book 'Lost Dog', which thankfully had a happy ending. What is the biggest thing you learnt about yourself during that experience and did it change Wolfy at all?

The biggest thing I learnt from the experience of losing my dog is that unless you are with your dog and fully in control of him/her then there is always a chance your dog could go missing. When a dog goes missing it is deeply traumatic and frightening. You are powerless.

For all that I learned about my unbearable worry and pain and how to hunt for a dog (it’s all in the book if you want to hear more about these things), what it really taught me was think really hard about who you leave your dog with. Are they equipped to manage your dogs’ emotional and physical needs? If they lose the dog, it’s still your fault. 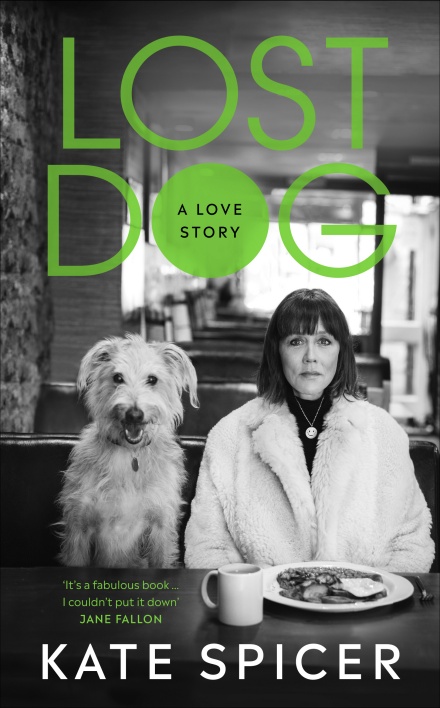 October 25th is National Dog Adoption Day, a day to celebrate rescue dogs and share stories. What would you say to someone to encourage them to consider adopting a dog?

Happiness arrived in my life in the form of a third hand 21-kilo scruffy looking dog. I often wonder what he was like as a puppy, but on the plus side, I didn’t have to house train him, he just slotted right in. In a second, he changed my life from OK to kinda wonderful.

What do you think the dog's biggest strength is compared to man?

Dogs live in the moment. If a human can do that, it’s frankly considered a superpower over the age of about four. Hence, my dog is my guru.

Finish the following sentence, my dog is…the love of my life.

Does the trembling that you are developing in old age cause you any pain?

What do you think his answer would be?

I haven’t a clue, it’s why I spend so much money on a naturopathic vet.